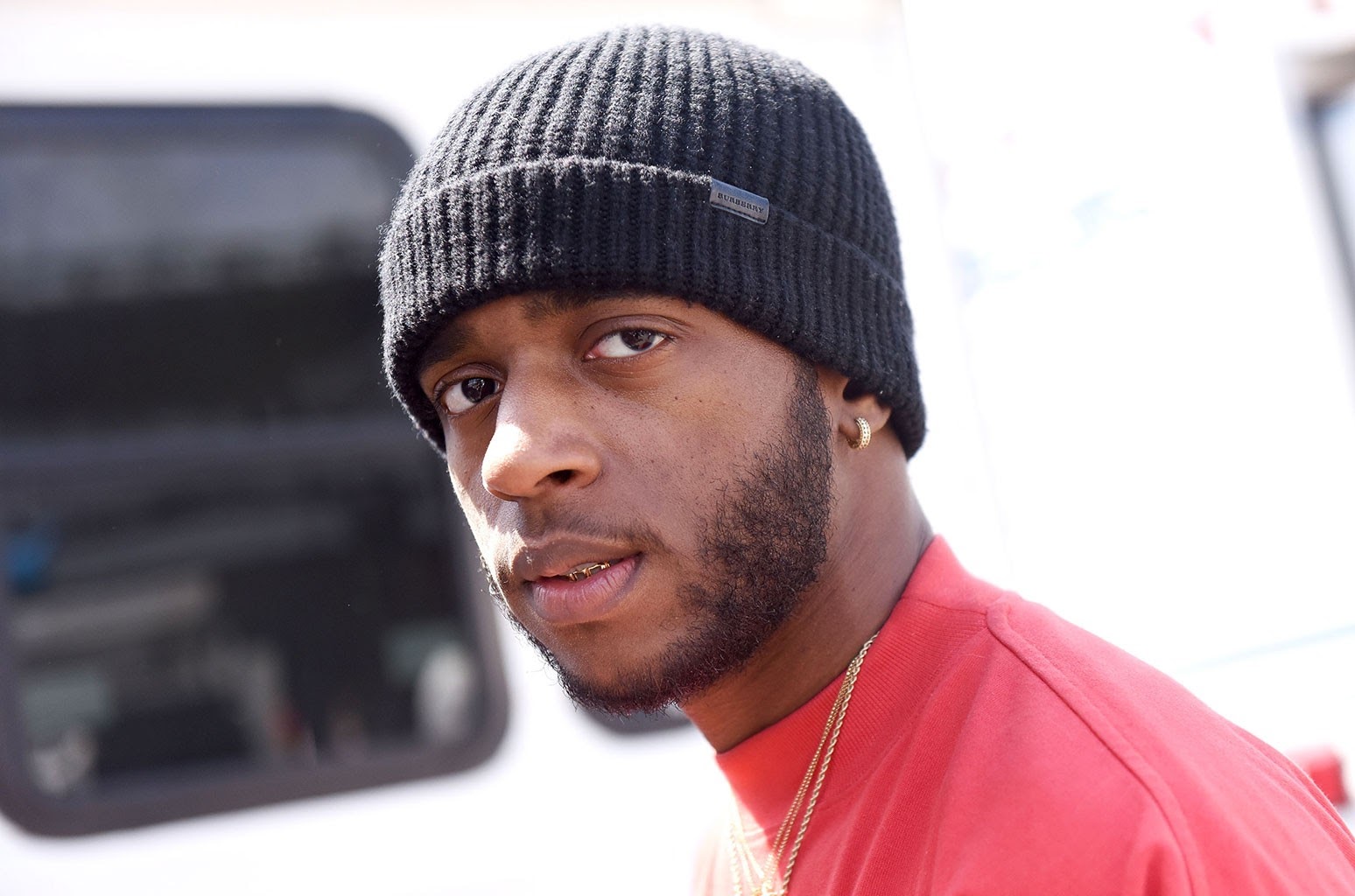 6LACK, name pronounced “black,” is one of the most popular R&B acts out of Atlanta in the past several years. He began buzzing around 2015 when he appeared on tracks with EARTHGANG and J.I.D. on Spillage Village’s album, “Bears Like This.” 6LACK’s biggest song to date is “PRBLMS,” which was released in June of 2016. He is currently signed to LVRN (Love Renaissance) and Interscope Records.

6LACK was born Ricardo Valdez Valentine Jr. on June 24th, 1992, in Baltimore, Maryland, and later moved to Atlanta, Georgia, in 1997. His first introduction to making music was through battle rap. He was involved heavily in the battle rap scene in middle school, even going up against the likes of Young Thug. He credits Cassidy for inspiring him to pursue the art form.

It was years later that the rap moniker “6LACK” came to fruition, and he began to record music. Part of the inspiration behind 6LACK’s stage name comes from a serious car crash that he was involved in as a teenager.

After attending a friend’s show in Florida one evening, he and his friends had to decide whether to stay in Florida for another night or start driving to the next city on their tour. They chose to drive. Consequently, one of their drivers fell asleep while on the road and crashed into another vehicle. The vehicle that 6LACK and his friends were in spun and flipped several times before landing in a ditch offside the road. Fortunately, 6LACK was unscathed, and so were his friends.

This incident, among others that he felt brought him to the lowest point of his life, gave him the idea for 6LACK. Following the crash, he embarked on an existential journey, writing and thinking, looking at horoscopes, and eventually stumbling onto life path numbers. Being from Atlanta’s Zone 6 and feeling a connection to the number already, as well as loving black clothing, 6LACK was born.

After dropping out of Valdosta State University in 2011, 6LACK signed a variety of record deals with different labels. In this period of his career, he described himself as more of a rapper than a singer. In an interview with Joe Budden on the “Pull Up” series on Youtube, he reveals that his first signing out of college was just a “street deal” and was not an official record deal.

Eventually, he found himself in Miami with two other artists that were part of his group at the time. The group was called “Team Flight.” During this time, the older sister of one of the members of Team Flight was working at Flo Rida’s record label, IMG Strongarm. After being impressed by the facilities of the label and the lifestyle of its associates, he signed a contract with them that was worth less than $10,000. He did not have a lawyer at that time. He quickly found himself restricted by the deal he was signed to but was unable to get out of his contract for over three years.

6LACK claims that during this period, he did not perform a single paid show or receive any regular pay whatsoever. He says that this was the lowest point in his life financially. He was essentially homeless for much of the time, forced to sleep in recording studios and even outside on the street some nights. In this era, 6LACK began to explore his singing abilities and experiment with pop and R&B.

In 2015, after leaving Florida and spending some time living in Atlanta with the rap group EARTHGANG, 6LACK announced that he had joined the hip-hop collective, Spillage Village. He would go on to appear on several tracks on the Spillage Village EP that dropped that year. called “Bears Like This Too.” 6LACK began to gain some traction during this time with a few solo singles as well, such as “Bless Me” and “Loyal.”

6LACK really began to make waves in 2015 and 2016 when he connected with LVRN. In 2017, he would also sign to Interscope Records, which has a distribution deal with LVRN. After releasing his hit single “PRBLMS,” his fan base rapidly grew as the song hit a million streams in its first week.

That year in November, he was named by The Rolling Stones as one of 10 new artists to look out for during the month. The month after, Billboard included the song as number five on their “Twitter Emerging Artists” chart. The music video for “PRBLMS” has accrued over 210 million views on Youtube and 310 million streams on Spotify. The song was a part of his debut studio album, “Free 6LACK.” The artist says he had a feeling when recording the song that it was going to be successful.

His name really began buzzing when popular artists and celebrities began to cosign him, like when Kylie Jenner posted a Snapchat of herself singing along to “PRBLMS.” In 2017, he would release a song with Jhene Aiko called “First F*ck,” and the year after, he would land two huge features for his song, “OTW,” with Khalid and Ty Dolla Sign.

6LACK’s first project as a label-signed artist was technically supposed to be a mixtape. However, after his labels saw that the project performed and sounded more like a complete album than just a compilation of songs, it was upgraded to album status.

The artist describes “Free 6LACK” as his “first crack at the industry.” The 11-track project gets deep into 6LACK’s personal relationships and emotional issues, showing a vulnerability that many fans resonated with. In an interview with Billboard in 2016, he said about the project, “I wanted [the album] to serve as kind of a statement for everything, summarize the last five to six years of my life,” he tells Billboard. “I wanted to make a statement that I’m free from my older relationships and I’m free from all ways of thinking and my old feelings.”

The album entered the Billboard Top 40 and peaked at number 5 on the rap chart. It eventually reached platinum status in 2020 and even hit a billion streams on Spotify.

“East Atlanta Love Letter” was 6LACK’s first attempt at an R&B album, and it performed excellently, hitting the number one spot on Billboard’s “Top R&B Albums” chart. The project sold 77,000 units in its first week of release. It opened at number two on the Top R&B/Hip-Hop Albums behind Eminem’s “Kamikaze” album, which was 6LACK’s first time being in the top ten, while his previous album, “Free 6LACK,” only reached number eleven on the chart.

The subject matter of “East Atlanta Love Letter” deals with many of the same issues as 6LACK’s last album, such as heartbreak, trust issues, and inner conflicts. However, sonically, it features much more singing and generally has a slower, more moody vibe than “Free 6LACK.” 6LACK was able to acquire several heavyweight features for the project like Future, Offset, J. Cole, and Khalid. The album reached gold status near the end of 2020.

As 6LACK prepares his third solo studio album, he still drops music from time to time. After delaying for weeks out of respect to the Black Lives Matter movement triggered by the murder of George Floyd in June of this year, 6LACK blessed his fans with a new 6-track EP labeled “6 PC Hot.”

Notably, the project has a feature from Atlanta rapper Lil Baby on track four, “Know My Rights.” The song has over 30 million streams on Spotify. Compared to the steady, sad feeling of “East Atlanta Love Letter,” “6 PC Hot” fits more in line with the charismatic, lovey-dovey effect of his first project, “Free 6LACK.” At least for these six tracks, it seems that 6LACK has returned to his hip-hop roots a bit. It remains to be seen what direction his next album will take.

Originally started by EARTHGANG members Doctor Dot and Johnny Venus in the early 2010s, Spillage Village is essentially a supergroup of different artists, including EARTHGANG, J.I.D., Mereba, Hollywood JB, Jurdan Bryant, Benji, and of course, 6LACK. During the COVID-19 pandemic, the group took advantage of their free time and got together to create their first album outside of the “Bears Like This” series.

The project is called “Spilligion” and features an array of artists new to the group, such as Kountry Wayne, Ant Clemons, Lucky Daye, and more. It also has a feature from Ari Lennox and Chance the Rapper on track six, titled “Judas.” The group continues to collaborate with fellow hip-hop collective, Dreamville, having worked with artists like J.Cole and Bas in the past.

6LACK appeared on two tracks on “Spilligion,” including “Oshun” and “Cupid.” These two songs are really the first time fans have heard significant religious undertones in 6LACK’s music, which carry on through the entirety of the album. The track name for “Oshun” comes from an important deity in Yoruba-based religions. Oshun is the goddess of divinity, femininity, fertility, beauty, and love, which speaks to the song’s romantic themes. 6LACK has been affiliated with Spillage Village since their second album release in 2015.

What Is 6LACK Doing Now?

In the very beginning of 2020, 6LACK surprised some of his fans when he made an appearance on Selena Gomez’s album, “Rare.” He is featured on track nine of the album “Crowded Room.” As 6LACK approaches the release of his third studio album, it is still unclear exactly what kind of sound it’ll showcase. 6LACK has delved into many different genres at this point in his career and has not exactly found a clear-cut identity yet as an artist.

At the end of 2020, 6LACK went back to his rap origins, landing a huge placement on Lil Durk’s album, “The Voice.” He was featured on track seven, “Stay Down” with Young Thug. The album peaked at number on the Billboard’s “Top R&B/Hip-Hop Albums” chart.

Also in 2020, 6LACK received seven new RIAA certifications, gaining four new gold plaques, two platinum plaques, and one multi-platinum plaque. The songs that went gold were “Luving U” and “Free” off of “Free 6LACK,” as well as “Seasons” featuring Khalid from his sophomore album, “East Atlanta Love Letter.” The album itself also is certified gold now. The songs that went platinum in 2020 were “Imported” with Jessie Reyez and “Pretty Little Fears” with J. Cole. The multi-platinum award he received was for “PRBLMS,” which hit triple-platinum status, the only song of his to achieve that rank.

In 2021, 6LACK has also garnered some pretty significant attention, working with several new artists and receiving some notable cosigns. For Valentine’s Day weekend, he and New York rapper Lil TJay dropped their new melodic single, “Calling My Phone.” 6LACK has also been in the studio with R&B singer and former child actor Chloe Bailey. According to the Instagram of LVRN label co-founder Justice Baiden, “a BOMB was created.”

As for cosigns, 6LACK’s song, “Stay Down,” went viral on the Internet in January, after Los Angeles Laker superstar LeBron James posted a video on Instagram of him singing along to it. The video became particularly popular because of James’ inability to recite the lyrics correctly.