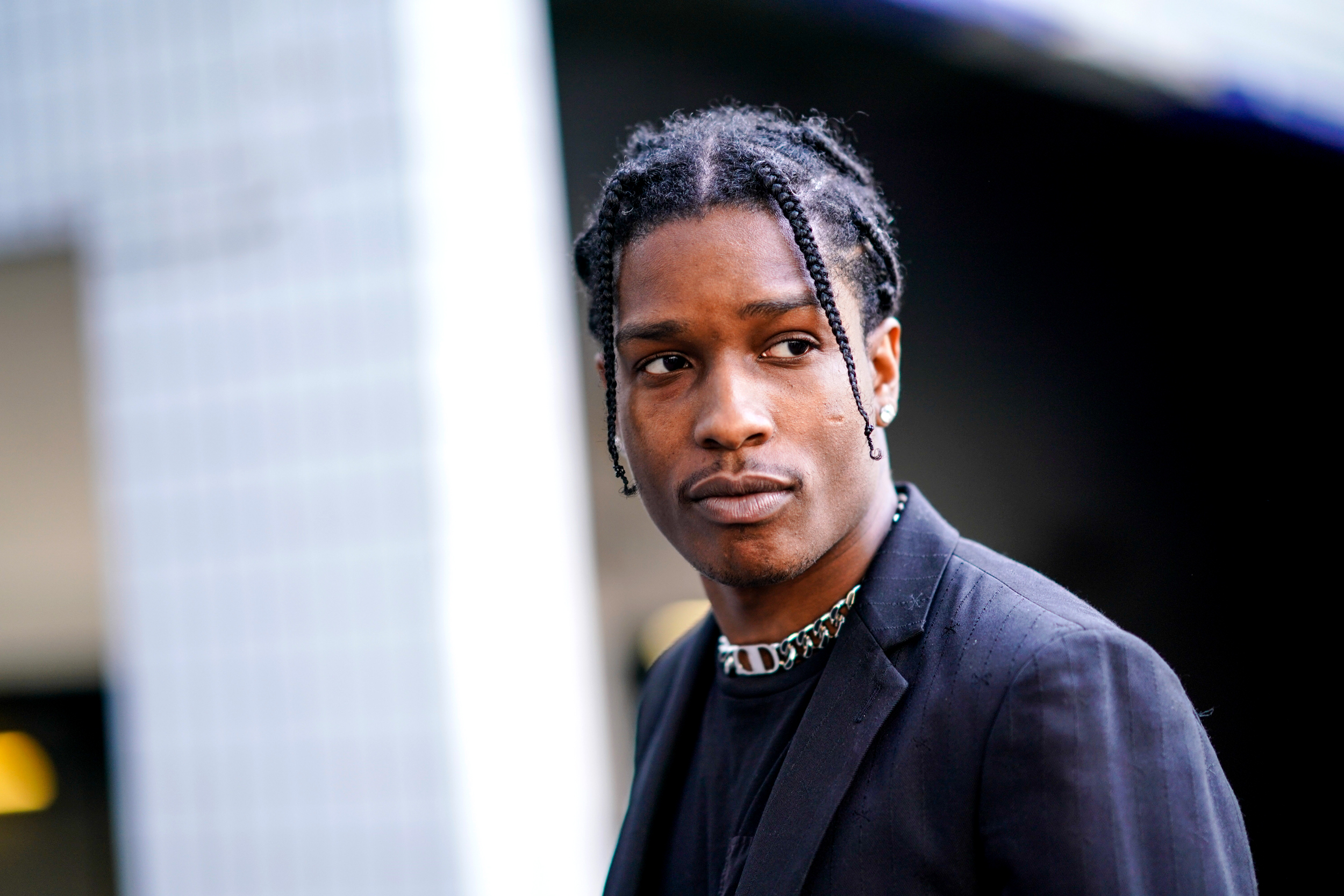 A$AP Rocky’s name is a map of his hip-hop legacy. The A$AP stands for “Always Strive and Prosper” – a reference to both his sense of hustle and the de facto motto of his crew A$AP Mob.

Then there’s Rocky – a reference to A$AP Rocky’s government name of Rakim, and a reference to one of the most legendary MCs and producers of all time. It’s too early to call Rocky a legend yet, but his deep understanding of hip-hop’s legacy partnered with his ability to chart new ground and draw in divergent musical influences make him one of the most promising and unique voices in the game.

And while Rakim may be known for his eccentricities, his history is dripping with the sort of legitimacy that countless suburban rappers which they had. Born in 1988, Rakim’s early days were lived on the streets of Harlem.

His Barbadian father dealt drugs to make ends meet. He was jailed in 2000 for drug-related charges – when Rakim was only 12 – and the impact would force Rocky, his mother, and his sister Erika B. out of their home and onto the streets. It was just one of many deaths that typified Rakim’s early life. His brother was murdered while Rakim was 13.

With his father absent and family members victimized by violence, A$AP Rocky did what many inner-city youths need to survive: following in his father’s footsteps and relying on hustling and drug-dealing for money.

By age 15, A$AP Rocky was bouncing from homeless shelter to homeless shelter with his mother and sister and selling weed and crack to make ends meet. This tumultuous period of transient living would be superseded by a period where Rakim lived by himself in midtown Manhattan. It would turn out to be a short-lived reprieve from a lifetime of institutional poverty. 2004 would see him serve a two-year stint at Riker’s Island for dealing. He’d share a cell with future rapper Casanova.

But by his own accounts, Rocky had already decided that he was going to be an artist, not just a hustler. His brother’s death at the hands of a rival dealer would be a sobering experience for Rakim, and one that forced him to reevaluate his passing interest in music as a genuine and heartfelt pursuit rather than just a hobby.

Rocky’s first meaningful collaborators would play an integral role not just in shaping his rhymes but also in shaping his fundamental persona – and he couldn’t have found a better fit than A$AP Mob. More than just a hip-hop collective, they were an eccentric group of artists who found a sense of companionship in their unique senses of style. Rappers and producers served as critical members of A$AP Mob, but it also found its sense of identity and voice from fashion designers, artists, and bikers. They found a lively sense of purpose that fittingly matched the bustling and creative scene in which Rocky’s namesake Rakim found his voice and his audience.

And the beating heart of A$AP Mob was inarguably A$AP Yams. It was his sense of editorial authorship and guidance that helped define the personality of A$AP Mob, and Yams became both a mentor and a close friend to the 19-year old Rakim.

It would take four years of Rocky honing his skills and practicing his rhymes to become a known quantity, but once his tracks hit, the success came almost overnight. 2011’s Purple Swag quickly became a summer anthem in the streets of NYC, and that momentum would only build over the months that followed.

The growing success of Purple Swag was accompanied by the August leak of the single Pesos. The online leak turned out to be a boon for Rakim when its success earned it a spot on seminal NYC radio station Hot 97. By the time he released his mixtape two months later, Rakim was already being courted by some of the biggest record labels in the business. A$AP Rocky signed a two-year record deal for a cool $3 million with RCA Records and Polo Grounds Music. Even with his first big success, Rocky was savvy enough to diversify his interests.

He’d use this newfound visibility and wealth to team up with friend A$AP Yams and form the independent label A$AP Worldwide.

Both the Gap and LIVE.LOVE.A$AP may have been a debut mixtape, but A$AP Rocky came out of the gates with a strong sense of confidence and a critical understanding of the sounds that predated him. Despite being a Harlem kid through and through, the influence of funkadelic Southern hip-hop and midwestern sounds shined through. Combined with more esoteric influences like MGMT, Rocky’s sound was unlike anything else on the scene. Part of that confidence came through the influence of Clams Casino, A$AP Ty Beats, and SpaceGhostPurrp – A$AP Mob producers who had already developed a sense of harmony with the young rapper.

And that sense of confidence perhaps allowed him to engage in a flow that was more socially conscious than the average radio hit. Like his contemporary Kendrick Lamar, Rocky took a critical eye to some of the unexamined issues in hip-hop: perhaps most powerfully, the misogynistic and sometimes abusive role that masculinity plays in hip-hop culture.

This sense of introspection and scrutiny would come to define A$AP Rocky’s later successes. His styles were largely influenced by the Southern hip-hop sound: and while he may have brought with him the real street legitimacy of Big Boi, he also demonstrated the style, swagger, and eccentricity of fellow Outkast alum Andre 3000.

In a 2015 interview, Rakim provided a quintessential perspective on how he both understood and engaged with his complicated understanding of masculinity while talking about how the older boys in his neighborhood would tackle delivery men in their neighborhood. “I was a kid, so I’m like, ‘That’s how a man tests his strength?’”

Becoming a Celebrity – With Reluctance

A$AP Rocky made it clear out of the gates that his experiences on the streets of Harlem may have played a critical role in shaping who he’d become, but that he’d never let it be the sole defining factor of who he was or what art he’d make.

As many contemporaries leaned into the street persona to play to a demographic, A$AP Rocky banked instead of his sense of individuality and flamboyance (not to mention the seamless confidence he brought to the mic). Early 2012 saw him tour with the similarly up-and-coming Kendrick Lamar as the opening act for Drake’s Club Paradise Tour.

And while there were a few disputes with fellow artists in the early years of his breakout success, A$AP Rocky kept his head low and focused largely on touring and making new music. And who could blame him? Rocky’s star rose fast, and he was performing with Rihanna by the end of the year at the 2012 MTV Video Music Awards.

Within a year, Rakim’s debut mixtape would be followed by his debut studio album. Long. Live. A$AP saw solid reviews while still maintaining the spirit of A$AP Rocky’s flow. Rocky’s frequent collaborators in A$AP Mob provided production but were joined by superstars Skrillex and Danger Mouse.

That’s not to say that Rocky’s first studio release was all old business. Some of the biggest names in the industry signed right up to work with the talented young rapper. Frequent collaborator Kendrick Lamar contributed rhymes along with legitimate hip-hop superstars like 2 Chainz, Action Bronson, and Danny Brown. And Rocky’s reached beyond the halls of hip-hop as well – with Florence Welch from Florence + the Machine contributing to one of the album’s biggest hits.

If there’s one characteristic that can explain A$AP Rocky’s career so far, it’s restlessness – but his inability to sit back and just rest on his existing successes is part of what’s made him such a lasting superstar. In an April 2013 interview, Rocky expressed both his desire to work with Andre 3000 and the upcoming release of an instrumental album.

We’ve only seen tantalizing bits of the latter and still haven’t seen the former collaboration, but Rocky definitely hasn’t just ridden along on his fame. He would continue to work with his A$AP Gang collaborators for the release of At. Long. Last. A$AP in 2015, and he even brought Kanye West along for the ride.

While the reviews weren’t perfectly glowing, there was the general impression that Rocky’s talent and versatility were matched only by his ability to balance his talents against those of his collaborators.

Since then, Rocky has maintained a steady presence throughout the music scene. He’s dropped two more albums in the years that follow, although neither has seen the sort of glowing reviews his debut album did. Still, he’s managed to stretch his muscles and a musician, and he’s worked with a sweeping variety of artists that have really demonstrated his ability to adapt to musicians inside and outside of the hip-hop scene.

A standout was his surprise performance with aging rock star Rod Stewart. Despite being polar opposites in their life experiences, A$AP saw direct parallels between his life and that of Stewart. According to Rakim, hanging out with Rod Stewart was “like seeing yourself 40 years older and white”.

Beyond the World of Music

A$AP Rocky got his start in a collective that saw art as art, regardless of what form it took or what genre it belonged to. So it makes sense that his interests move well beyond the conventions of what a hip-hop artist can be. In a 2016 Billboard interview, Rakim said “You got two types of rappers. The celebrity and the artist. I’m famous, I’m popular — I’m just not a celebrity. I’m an artist. In my sixties, I don’t want to be just remembered as that kid from back in the day that had cool shit.” It’s no surprise, then, that he’s expanded his talents beyond the music industry.

Countless rappers have tried to make a break in Hollywood, but few have done so with the earnestness of Rakim. And while 50 Cent’s film career may be about mythologizing his larger than life personality, Rakim was more reflective regarding his role in indie drama-comedy Dope. “I think all of us are that kind of guy — all of us rappers, to a certain extent. I never want to be that guy. That dude’s corny. He can’t even dress!” he said about his small-time drug dealing character.

But if there’s an obvious pathway to success from A$AP Rocky apart from his hip-hop career, it might come in the world of fashion. Rocky’s sense of style is as important to his persona as his swagger and flow are – and he’s been praised for his fashion since the release of his first album.

And while Rocky has been outspoken in that he doesn’t want to become a fashion designer, he’s certainly making waves within the industry. He’s collaborated both with close friend Raf Simons and legendary designer Jonathan Andersen. Clothing is clearly important to Rocky, and he’s worked in close collaboration with the Gap to curate his own unique line inspired by the clothes he grew up with.

A$AP Rocky has broken out so big and been such a constant presence in the hip-hop and fashion scene that it can be hard to remember that his first album dropped less than a decade ago. And it’s hard to know where he’ll go from here. He’s an artist with one foot in hip-hop music and another firmly entrenched in the wider world of music.

He’s an artist who shows promise as both a fashion designer and an actor. And it’s impossible to know yet what he’ll do next. But we can be assured that he’ll always be experimenting.

And it’s clear that his ambitions to create go well beyond what we’ve been taught to expect from a poor hustler from the wrong side of Brooklyn.