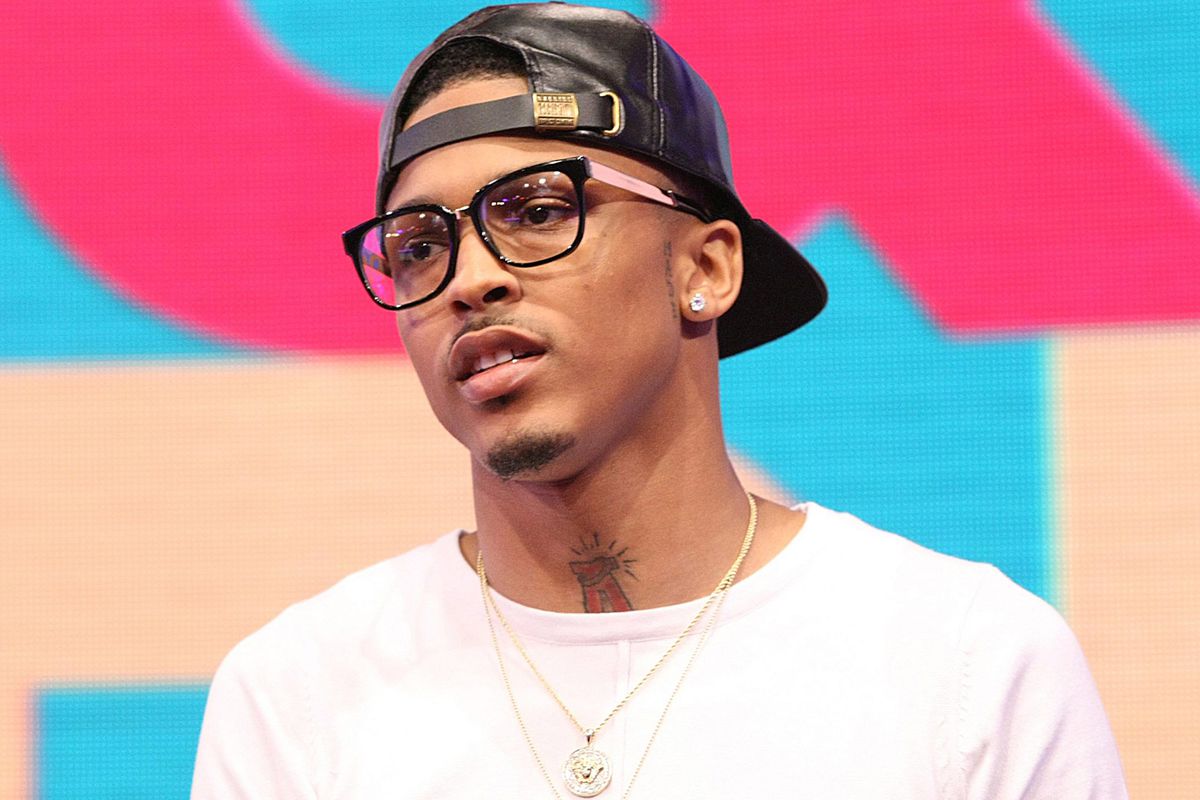 August Anthony Alsina was born September 3rd, 1992. He is a singer-songwriter

who was born in New Orleans, Louisiana. At a young age, August knew his father and brother were sick.

They were addicted to crack cocaine, and after Hurricane Katrina ravaged New Orleans in 2005 his mother took him and moved to Houston, Texas for a fresh start. August’s father died shortly thereafter, and his brother was shot and killed on August 31st, 2010. At some point August’s relationship grew strained with his mother, and he moved out and focused solely on his music.

Although his family members were not musical in any way, he said that he was inspired to sing after watching Lauryn Hill sing in “Sister Act 2.” At the age of 14, August uploaded videos to YouTube of himself singing. He started with a cover of “Hypothetically” by Lyfe Jennings and continued to collect followers as the years passed and he posted more videos. In 2011 he started releasing Mixtapes.

Tracklist: You’re My Baby, Bitches in ATL, Trust Issue, E.T, How to Love, Someone Like You

“The Product” is typically recognized as August’s first mixtape since it was released first. He led up to the release of the mixtape with months of viral videos, covers, and leaks. It was released as a free download when August was 19 and delighted his fans. He released the album on 04/15 because it is the birthday of his late brother, who died from a gunshot wound in New Orleans in 2010.

On the back of the mixtape’s cover reads, “Dedicated to my big brother. R.I.P. Melvin LaBranch III, 4.15.86 – 8.31.10.” According to August, his brother inspired him to leave street life behind and make music his full-time job.

Tracklist: Forever and a Day, Be Love, For You, Control, Secret, Go, Lost, Us

August’s most successful song is “I Luv This Shit” where he collaborated with Trinidad James. He won the Coca Cola Viewers’ Choice Awards for the song and in the same year, he won the BET Award for Best New Artist.

Tracklist: This Thing Called Life, Job (Ft. Anthony Hamilton & Jadakiss), Why I Do It (Ft. Lil Wayne), Hollywood, Hip Hop, Change, Dreamer, Been Around the World (Ft. Chris Brown), First Time, Would You Know, Song Cry, Other Side, American Dream, Look at How Far I’ve Come, The Encore

August released “Make It Home” featuring Jeezy, as the lead single from his first studio album January 14th, 2014. At the same time of the release August announced that his long awaited full length album would be called “Testimony”. Upon the release of his debut album August received mainly positive reviews. Several critics were very impressed with August’s first studio album, and in its first week of the release it scored a 79 out of 100 on MetaCritic.

December 11th, 2015 August’s second studio album “This Thing Called Life” was released. It started out at number 14 on the Billboard 200. One June 28th, 2015 the music video was released for “Hip-Hop”, and it premiered at the 2015 BET Awards. Lil Wayne and August worked on the song “Why I Do It” together and they seem to have formed a good working relationship together, since Lil Wayne showed up on August’s third album and August has since been featured on Lil Wayne’s Apple Music show “Young Money Radio”. As is discussed on RapTV.com, Lil Wayne and August Alsina have a lot in common since they both started their music careers at a young age and they both grew up in New Orleans. This may have been enough for them to bond over when they started collaborating.

June 26th, 2020 August’s third  album, The Product III: stateofEMERCEncy was released. The album debuted at number 48 on the Billboard 200. August had been working on this album for a while, calling it a continuation of his mixtape series.

More recently August Alsina’s name has been seen in the news in conjunction with Will and Jada Pinkett Smith. August has stated in a YouTube interview with Angela Lee  that he had a year long relationship with Jada Pinkett Smith and Will Smith gave his blessing. Jada Pinkett Smith’s representatives initially denied these statements.

August claimed the relationship would have happened during Jada’s marriage to Will Smith, and according to RapTV.com August stated, “He gave me his blessing and I totally gave myself to that relationship for years of my life and I truly and really, really deeply loved and have a ton of love for her. I devoted myself to it. I gave my full self to it so much so to the point that I can die right now and be ok with knowing that I truly gave myself to somebody.”

He went on to say, “[T]here’s so many people that are side eyeing me, looking at me questionable about it. I’ve lost money, friendships, relationships behind it and I think it’s because people don’t necessarily know the truth but I have never done anything wrong.”

On July 10th in an episode of her talk show Red Table Talk, Jada Pinkett Smith spoke candidly with Will Smith regarding the romantic relationship that she did in fact have with August Alsina four and a half years prior. She stated that the relationship happened at a time where she and her husband were separated and she “got into a different kind of entanglement with August.”

Jada Pinkett Smith and Will Smith both denied vehemently that Will had given August permission to proceed with the relationship, but Jada conceded that August “would perceive it as permission because we [her and Will] were separated amicably”.

Jada Pinkett Smith went on to claim that she wanted to “heal” August, but needed to focus on finding healing for herself. She and Will eventually reconciled after Jada broke things off with August and Jada says they have not made contact since.

It’s clear that there was some sort of a relationship between August and Jada Pinkett Smith, or “entanglement”, the meaning of which is discussed on RapTV.com. Whether August’s claims of a more recent relationship are true or not, he feels very strongly about his experience and he is currently in an uncomfortable place in his personal life.

As uncomfortable as his personal life seems, August has an even more uncomfortable physical ailment that he is dealing with. In 2017 August admitted that he is dealing with an autoimmune disease that attacks his liver and his eyesight. An autoimmune disease is a condition in which your immune system mistakenly attacks your body.

The immune system normally guards against germs like bacteria and viruses. When it senses these foreign invaders, it sends out an army of fighter cells to attack them. Like most people dealing with autoimmune diseases, it would be easy to look at August and assume that he is completely healthy on a typical day. Autoimmune diseases are some of the illnesses that fit into the group known as “invisible illnesses.”

In 2014 August was in the middle of a live show when he collapsed on stage, where he was hospitalized after suffering multiple seizures during the performance. He was in a coma for three days following the incident.

This proved to be a scary moment for him and his fans. On July 8, 2019, Alsina updated fans on his recent health scare. In a video he posted to Instagram, the singer explained that he was hospitalized after suffering the loss of movement in his legs. “We’re doing a bunch of tests and they’re saying I have some nerve damage going on throughout my body.”

While the Instagram video is pretty direct and matter-of-fact, the caption reads, “Hiiii guys!! 😂It’s me, being my most awesome, weirdly great self. 🤦🏽‍♂️I’m here with the stitch 🗣 & to also apologize for not being able to make the essence fest gig last night. I take my career & your time very seriously & the fact that you guys show up for me, endlessly. Means the world! I’m man down right now, & figured I should share.. that My auto immune disease is raging, but im fighting this thing & on my mission to shake back & beable to make it up to you! I got so much 🎶NEW NEW🎶 to share w/ you!!!..& Big Love to give. ❤️Big Life, Big Dreams & every peaceful thing to you! Less stress, More Love, More Rest, & Jah Bless. 🙏🏽 know that HE’s got you even when it all feels too complex. 👁⚡️🙏🏽”

With all of the difficulties that August has gone through in his life, he seems to have been able to maintain a good sense of self and a strong spirit.

He is working hard on staying well enough to produce more content for his fans and keep the music alive.