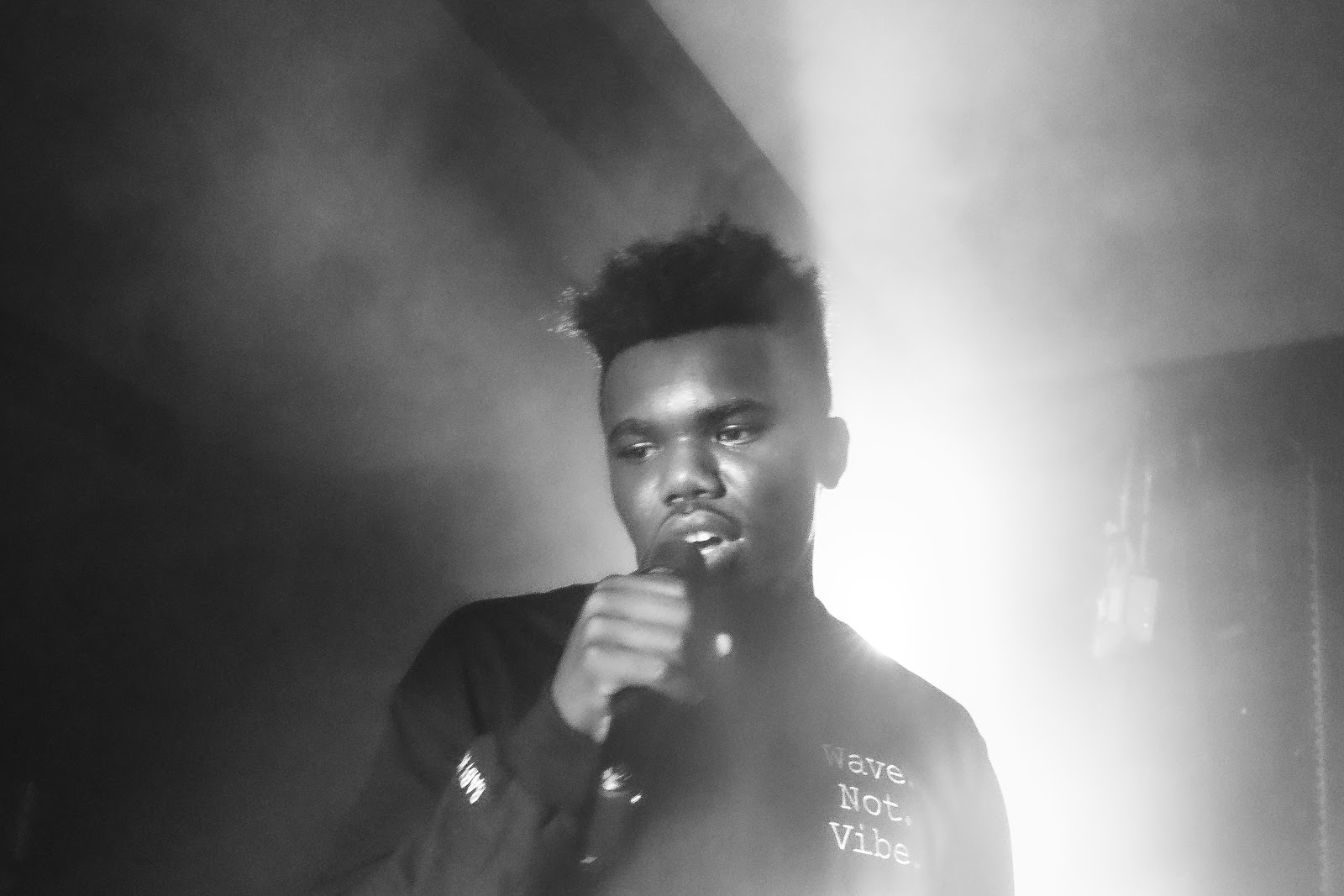 Baby Keem is one of the newest, most intriguing acts in hip-hop right now. Though showing some consistency with the current sound of today, he possesses a unique aura around him, characterized by his highly artistic music videos and by the fact that not much is known about him. So far in his career, Baby Keem has kept himself fairly lowkey, doing very few interviews and rarely showing off his life on social media. The rapper actually refused to reveal his face for a huge chunk of his career. Interestingly, he is also rumored to be the cousin of Kendrick Lamar.

His mysterious persona is reminiscent of artists like The Weeknd, Nav, and Playboi Carti, who all share the same dislike of media attention. The 20-year old is best known for his hit single, “Orange Soda,” off of his sophomore mixtape, “Die For My Bitch”. The project, which was released in July of 2019, reached the number 98 spot on the Billboard “Hot 100” chart. In 2020, he was inducted into the year’s XXL Freshman Class.

Though his solo career just took off recently, he’s been quietly earning his respect in the music industry over the past few years. He contributed as a songwriter and producer on several Top Dawg Entertainment projects, including Kendrick Lamar’s “Black Panther: The Album,” Schoolboy Q’s album, “Crash Talk,” and Jay Rock’s album “Redemption,” as well as others.

Baby Keem was born Hykeem Jamaal Carter Jr. in Carson, California, on October 22nd, 2000. However, he was largely raised in Las Vegas, Nevada. The artist does not seem fond of his hometown, though. He describes Las Vegas as “boring, dry, small.” When asked why he left the city as a teenager to move to Los Angeles, he responded, “It’s small. It’s nothing, no music scene. Do you know any artists from Las Vegas?”

Baby Keem says that he wanted to be involved in music for his whole life. He says he grew up in a talented family and that all his uncles and older cousins were rappers. Growing up, he always wanted to rap, but didn’t have confidence in his voice and wanted to wait until it developed. It was when he turned fifteen that he had felt his voice was deep enough to rap, and he began recording music. After borrowing $300 from his grandmother, he was able to obtain a cheap recording setup off Craigslist.

Baby Keem says that he used to always try to rap with a deep voice and only started to truly find his sound when he embraced his natural, high-pitched voice. He made his first song during his freshman year of high school. Even before he started recording, though, Baby Keem was constantly writing raps to beats he found online. His first song ever was called “Come Thru.” He says the song has been taken off the Internet, though, and he “hopes nobody will be able to find it.”

In November of 2017, Baby Keem began releasing music under his real name. His first EP was called “Oct” and showed traces of Baby Keem’s current style, featuring a mix of bouncy, hard beats and slower, emotional cuts. The EP was 9 tracks long. However, it was removed from all streaming services shortly after its release.

Four months after the release of “Midnight,” the artist dropped yet another EP, this time with five tracks. The project was called “No Name,” and all of the songs on it featured Baby Keem singing, as opposed to rapping. Eventually, all three of these EP’s released under “Hykeem Carter” were removed from streaming services. In July of 2018, the artist finally began to release music under the name “Baby Keem.”

With the release of his first EP as “Baby Keem” called “Hearts of Darts,” he was quick to criticize his previous projects like “Midnight.” When speaking about the EP, Baby Keem says, “Midnight had no real direction, it was just nine songs in my stash that I liked and put out.” When asked how the EP compares to “Hearts of Darts,” he said, “It has personality that Midnight lacked.” The project was entirely produced by Cardo.

The song was seen again on the rapper’s next project, “The Sound of Bad Habit,” his first full mixtape. The biggest song on the tape was “Gang Activities.” In January of 2019, he released a music video for the song that was directed by Shia LaBeouf. The video amassed over a million views on Youtube since its release, which was Baby Keem’s first time hitting that milestone. Since he began releasing visuals and showing his face, Baby Keem’s music has started to gain some serious traction.

Baby Keem’s introduction to the hip-hop industry was through songwriting and production. He has helped write and produce records like Schoolboy Q’s “Numb Numb Juice” and “Lies,” Jay Rock’s “Knock It Off” and “Rotation,” “Redemption Interlude” from “Black Panther: The Album,” and Kendrick Lamar and Beyonce’s “Nile,” which was featured on “The Lion King: The Gift.”

Even before releasing his first body of music, “Heats & Darts,” Baby Keem had already worked with several stars in the industry. The teenager had already won a Grammy award by 2018 for working on Jay Rock’s “Redemption” album. It is unknown exactly how he was able to work with such major artists as a teenager, but it is believed that his close relationship with Kendrick Lamar was a catalyst for his behind-the-scenes work.

“Die For My Bitch”

Baby Keem’s debut studio album, “Die For My Bitch” was released in July of 2019. The music video for “Orange Soda” is currently sitting at 18 million views, and the video for “Honest” has over 2 million views. In August of 2020, “Orange Soda” officially went platinum. Overall, the album can largely be categorized as rap music, but some songs go outside the boundaries, such as “MY EX,” which has clear pop-punk attributes, and “HONEST,” which carries strong, alternative rock elements.

The project constantly shifts from smooth, slow jams displaying Baby Keem’s vulnerable side to hard, aggressive bangers showing his ability to rock a crowd. From romance to rage to unfaltering swag, Baby Keem gives the fans a wide range of styles on “Die For My Bitch.” The album features production from several notable acts such as Sounwave, DJ Dahi, Cardo, and CuBeatz.

After the successful release of his debut album, Baby Keem stayed relatively quiet for almost the entire next year. His rapid rise to fame and the small sample of solo music he had released led fans to question his legitimacy as an artist. However, in September of 2020, on a random Thursday night, the critics were silenced as Baby Keem dropped two new tracks that made some serious noise in the industry.

They were titled “Hooligan” and “Sons & Critics Freestyle.” Particularly, “Hooligans” made a huge splash, racking up nearly 5 million views for the music video on Youtube and getting mentioned on several established publications like XXL Mag, Complex, HipHopDX, and Pitchfork. Both songs were released through pgLang via Columbia Records. Dave Free and Kendrick Lamar have executive production credits on the music video.

The video features Baby Keem alone with a girl at night, walking around in a suburban neighborhood. There is a blank expression on the rapper’s face throughout the entire video, and he isn’t even rapping along to the lyrics. In fact, Baby Keem’s facial expression doesn’t change at all during the video. He just gives off a cold, empty stare into the camera at all times. The rapper’s unconventional presentation adds to this sense of mystery that shrouds him.

The song itself sounds modern and fits with the melodic, trap vibes that are so popular right now. However, the way Baby Keem delivered the song, from the eerie cover art to the unorthodox video to the minimalistic rollout plan, is so inherently different from the traditional hip-hop release.

He barely even teased the two tracks, simply tweeting with a picture of the cover art three days before the drop, “two records, 9/18.” When they finally did come out, Baby Keem posted on his Instagram the cover art with the caption, “hooligan, sons & critics” with no additional context. The artist rarely says more than a few words every time he posts on social media, and thus far, this strategy has increased the allure surrounding him.

In late 2019, Drake attended the stop in Toronto for Baby Keem’s tour for “Die For My Bitch.” He also advocated for Baby Keem’s first album in an interview with Rap Radar. During the Atlanta stop of the tour, Dreamville affiliate J.I.D. made an appearance. At the New York stop, the support for Baby Keem continued, with A$AP Rocky and Lil Dicky showing up to watch him perform.

During Baby Keem’s set, Lil Dicky even hopped into the mosh pit. Despite this being his first tour, he sold out several shows. In mid-December, the cosigns kept going as Baby Keem was seen having dinner with Jay-Z. The details behind their relationship are unknown, but by the end of 2019, it is safe to say that many major players in the industry had become familiar with Baby Keem. In 2020, his music was mentioned by Kendall Jenner and Bella Hadid on Instagram, as well as other celebrities.

Plans For The Future

At the start of 2021, Baby Keem was spotted in two trailer videos released by a new music service company, pgLang. The first video, labeled “Welcome to pgLang,” also featured Jorja Smith, Yara Shahidi, and Kendrick Lamar. It begins with a clip of Baby Keem peering up at the sun while sitting in a grass field. Yara Shahidi appears, and the two have a brief conversation about why you shouldn’t look at the sun for too long.

In the second video labeled “Propaganda,” Baby Keem is shown recording in the studio and performing at concerts, jumbled up by sporadic clips of scenic shots and unidentified figures in strange costumes.

The video is all-over-the-place, changing clips every few seconds to something completely unrelated to the previous clip. Though the meaning of these two videos is unclear for the most part, they are some of the first times the public is hearing Baby Keem speak to the camera. The fans have heard the rapper singing along to his songs in music videos and the occasional few words said on his Instagram Live, but up to this point, Baby Keem has seldom been seen just talking. Though his dialogue in these two videos isn’t very substantial, they reveal just a smidgen of insight into the 20-year old artist’s peculiar personality.

PgLang is founded by Kendrick Lamar and Dave Free. The company functions as a record label, publishing house, and recording studio. Kendrick Lamar began teasing this fresh project in March of 2020 when he tweeted a graphic logo for the brand and the word “pgLang” with no context.

Baby Keem’s connection to the brand is still relatively murky, but with the company putting out the last few music releases for him, it is likely that he has been signed to them. He has been a face of the brand so far, appearing in all of their visuals. In an interview with Crack Magazine in June of 2020, Baby Keem said about Kendrick Lamar and Dave Free, “They’re my guys, that’s my team. That’s my life.”

Kendrick Lamar Announces Mysterious ‘pgLang’ Project: What Does It All Mean? | Billboard