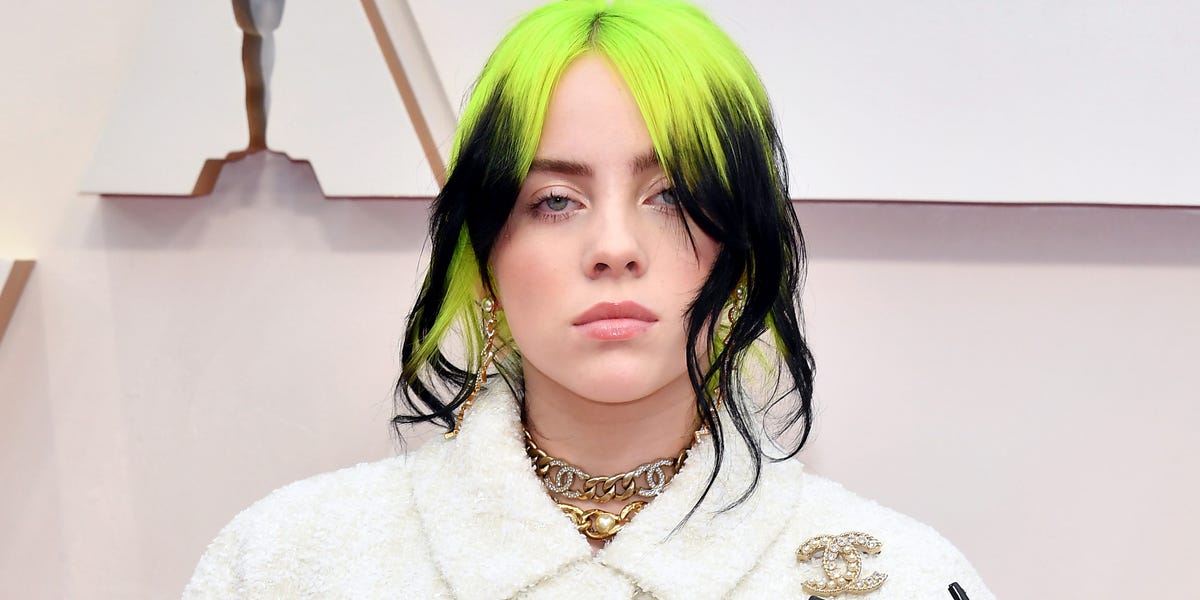 Billie Eilish Pirate Baird O’Connell, professionally known as Billie Eilish, is an American singer and songwriter born on December 18, 2001 in Los Angeles, California. She is the daughter of teacher, actress, and screenwriter Maggie Baird, and construction worker and part-time actor, Patrick O’Connell. Both her parents are amateur musicians.

Her brother Finneas is four years older than she is. Billie Eilish is of Irish and Scottish descent. While being homeschooled, Billie’s mother taught her and her brother Finneas songwriting. They also worked together on music.

At age 11 Billie wrote what she considered her first “real” song for her mother’s songwriting class. It was inspired by the concept of a zombie apocalypse the television series The Walking Dead, taking episode titles script dialogue and that she wove into the song to meet the requirements of her songwriting class assignment.

The music Billie Eilish grew up listening to included Justin Bieber The Beatles, Marina and the Diamonds and Kesha, Lana Del Rey, and Green Day, and Childish Gambino, with creative influences that include Lorde, Tyler the Creator, Earl Sweatshirt, Amy Winehouse, and the Spice Girls.

She wasn’t quite a fan of acting auditions, so she didn’t gravitate to her parent’s interest in acting as much. But she did like recording background dialogue and worked on the films Diary of a Wimpy Kid, Ramona and Beezus, and the X-Men series.

Straight out of Los Angeles

At the young age of 8, Billie Eilish was performing live at talent shows and even became a member of the Los Angeles Children’s Chorus.

Her older brother Finneas serves as her co-writer and producer, hitting listeners with a merger of sweet and eerie lyrics that grabbed attention. Billie was a huge lover of dance. But a growth plate injury in 2015 that happened while she was practicing for a recital, she was dancing eleven hours a week for.

When Billie’s dance instructor was in search of a song to apply choreography to, Billie and Finneas created “Ocean Eyes,’ it was uploaded to SoundCloud, and became a viral smash with over two million streams.

Finneas’ manager contacted him after “Ocean Eyes” to discuss Eilish’s future potential. Finneas, arranged a deal with Apple Music to sign Eilish to A&R company Platoon, which helps get artists prepared and professionally packaged prior to getting a major label deal. The next step for Eilish was getting a publicist who put her in contact with brand Chanel. Billie then got a stylist who was responsible for shaping and molding the young pop star’s image. of whom helped shape her image.

This all set the wheels in motion for Billie Eilish to get her name bolstered by signing a record deal with the record label and artist management company The Darkroom, an imprint of Interscope, in August of 2016.

A music video featuring Eilish performing a dance to “Ocean Eyes” was released in November 2016, followed by the song being re-released worldwide through Darkroom and Interscope. also released the single “Six Feet Under,” premiering on Apple Music’s Beats 1 radio show in 2016. “Ocean Eyes” was certified platinum by the RIAA in September 2018 and hit the peak position of number 84 on the Billboard Hot 100 in May 2019.

Don’t Smile at Me was the RIAA Platinum-certified EP that Billie Eilish released on August 11, 2017 that contained huge songs for her:

The Up Next Session: Billie Eilish EP came through a little over a month later on September 20, 2017, making way for her big debut studio album When We All Fall Asleep, Where Do We Go? on March 29, 2019. Billie Eilish’s first full album began a gigantic sensation, going Platinum in the United States alone. She ended the year with a live album, Live at Third Man Records, released on December 6, 2019.

Billie Eilish has already gotten five Grammy Awards, two American Music Awards, two Guinness World Records, three MTV Video Music Awards, and one Brit Award. Let’s not forget that she is the youngest person and second person ever to win the four main Grammy categories – Best New Artist, Record of the Year, Song of the Year and Album of the Year in the same year.

The year of 2019 was a big one for Billie Eilish attaching herself to many products that she was hired to provide her celebrity endorsement to:

In Her Personal World

It has been stated that Billie Eilish lives with her parents in the northeast Highland Park area of Los Angeles, California as of 2020, who raised her to be a vegetarian. She is coping with depression, Tourette syndrome, and synesthesia.

Still only 18-years-old, Bill Eilish has a long road ahead of her to travel in the entertainment industry