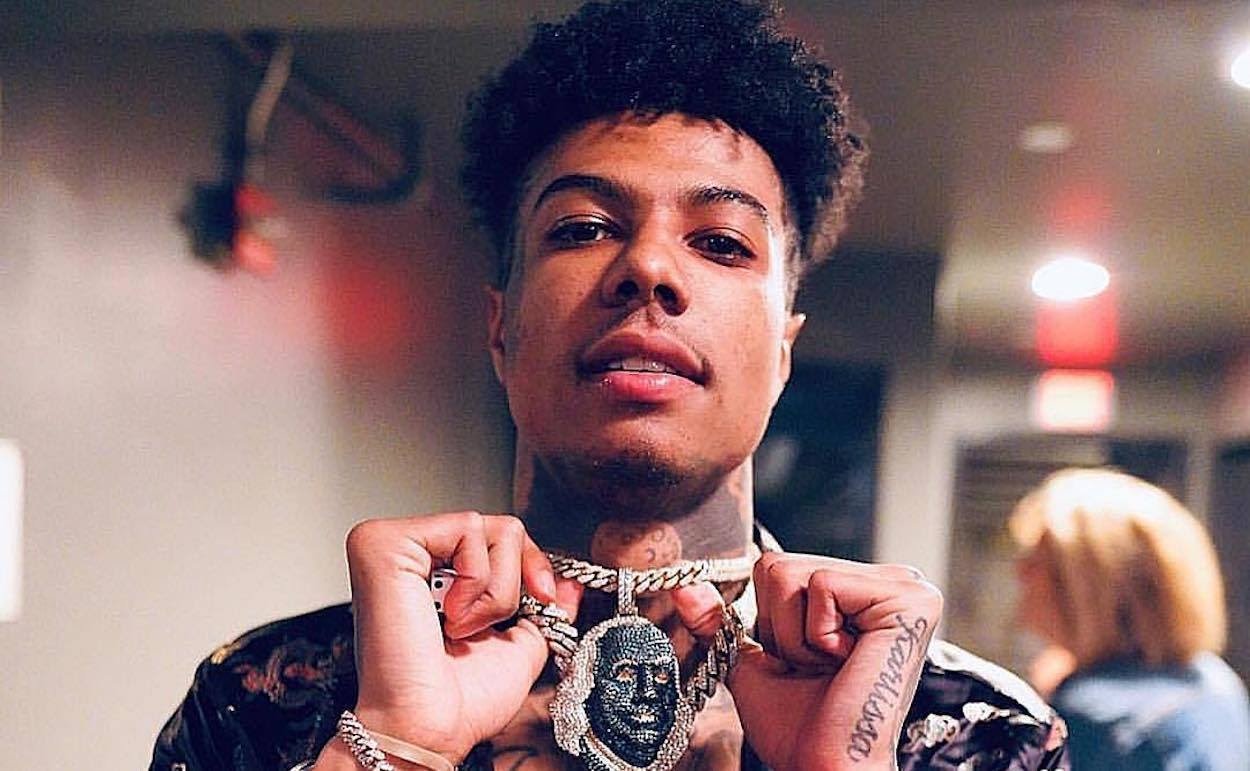 Blueface is a rapper, entertainer, and viral meme all-in-one. The rapper garnered serious attention online in 2018 for his hit single “Thotiana,” as well as from several online controversies he’s been involved in, including having pictures of his penis leaked, then later using it as cover art for his song.

His name is an ode to his affiliation with the Crips, as well as the blue hundred-dollar bill. He is a member of the School Yard Crips gang, which dominated the neighborhood he grew up in. Blueface’s music is unlike anything the rap game has heard before, especially out of L.A.

The rapper’s music can be characterized by his off-beat flow, high-pitched, goofy ad-libs, and clever punchlines. His sense of humor while rapping is uncanny, sliding in deep metaphors and witty wordplay in almost every song he makes. However, his music has undeniably benefited from many of the non-music-related shenanigans he’s been involved in. From making boastful claims like that he’s the “best lyricist”  in the game, that he’s a “famous Crip,” and that he’s smashed over 1000 women in his life, Blueface has been making a name for himself, both as a rapper and as an online personality.

Blueface was born Jamall Michael Porter on January 20th, 1997, in Los Angeles, CA. His first taste of the media industry was as a child when his mother, who’d moved to Los Angeles from Ohio to pursue acting, took him around for commercial auditions. Reminiscing about his childhood acting days, Blueface says, “It was fun when I got picked, and I was in the commercial and it was like, ‘oh, look at the commercial! But I didn’t enjoy it as a kid.”He would ultimately quit acting once he began playing football.

During his adolescent years, Blueface moved around the L.A. area frequently, attending five different high schools in total. He played football at Arleta High School and Tahquitz High School, where he played quarterback. According to a 2014 LA Times article, Blueface once “fired a game-winning 66-yard touchdown pass” in a game and “completed 20 of 38 passes for 330 yards and three touchdowns with three interceptions.” In March of 2015, he committed to Fayetteville State University in North Carolina on a football scholarship. Eventually, Blueface dropped out of college though and decided to quit playing football. It is believed that Blueface struggled with a bout of depression during this time, which he references in his song, “Studio.”

After college, he moved back to L.A. and worked various odd jobs, including at Office Depot and as a maintenance worker. When he came back from college, he also became a father, caring for his son Jevaughn while Jevaughn’s mother, Jaidyn, worked. Additionally, Blueface had aspirations to become a barber at this point in his life and even ran an Instagram account called the Fade Room showing off his haircuts. During this time, Blueface’s mother had moved back to Ohio, leaving him alone in L.A.

He credits her absence as one of the catalysts for his success, saying, “I think if she was in Cali when I was doing my thing, it wouldn’t have worked. I would have been in her nest, and she wouldn’t have necessarily agreed with half the sh*t I was doing. It made Blueface be able to be Blueface 100 percent.” After some time, Blueface coincidentally fell into rap while hanging out in the studio with the cousin of Ty Dolla $ign, TeeCee4800.

It was there that he would be introduced to the process of making music. In an interview with 30MileExclusive, he says he got the opportunity to record his own music one night when TeeCee4800 asked him to come to the studio to return a “charger piece” that he had left in Blueface’s car. When speaking about that night, Blueface says, “I would consider myself an opportunist, so I seen it as an opportunity. I start writing down my little lyrics, and when it was my time, I said, ‘Let me get in the booth, man.’ And, once I heard my voice, I was sold.”

Blueface began releasing music periodically on Soundcloud but didn’t really begin to start buzzing until early 2018 with the release of the music video for his single, “Dead Locs.” Today, the music video has over 23 million views and over a million plays on Soundcloud. The song went viral for Blueface’s polarizing, all-over-the-place style of rapping, as well as his provocative, out-of-the-box lyricism.

The song also received additional attention due to its highly mimicked dance in the music video. In the music video, Blueface is seen grabbing his crotch and gyrating his waist to the beat. This move was called the “bust down.” At this time, Blueface was promoting his music by doing tours of high schools and meet-and-greets with fans at malls. This grassroots effort helped him build a loyal fan base in the early days of his career. He followed up his success with an even bigger single a few weeks later called “Thotiana.”

The song hit number 9 on the Billboard Hot 100, and the music video for it premiered on WorldStarHipHop, acquiring over 20 million views. The song would explode on social media, leading to several rappers making their own versions of the song, including Young M.A., Nicki Minaj, Desiigner, and others. Before the end of 2018, Blueface would drop the “Famous Cryp” mixtape, the “Two Coccy” EP, and a collaborative mixtape with Trendd called “We Over Famous.”

Late in the year, Blueface signed with long-running rap superpower Cash Money Records and also signed a distribution deal with Entertainment One Records. According to Nielsen Music, Blueface’s “Famous Cryp” tape was receiving five to seven million streams a week at this time. Blueface ended 2018 with a single called “Bleed It.” It was the rapper’s first music video to be directed by Cole Bennett and appear on the Lyrical Lemonade Youtube channel.

The video amassed over 100 million views. To start off 2019, Blueface would make two more appearances on the Lyrical Lemonade channel with two remixes for his song, “Thotiana.” The first remix featured YG, which received over 74 million views and the second remix, which featured Cardi B, received over 218 million views. The music videos for the remixes came out a month after each other.

In January of 2019, Blueface appeared on Power 105.1’s  “The Breakfast Club,” which was his biggest interview at the time. The rapper went viral on social media for not knowing the details of his record deals when asked about it. Apparently, all he knew was that he was signed to Cash Money West and Wack100, leading fans to speculate if he was being taken advantage of by the label.

He would make another appearance on the show six months later, where he would make headlines again for speaking about his polyamorous relationship, as well as his issues with his mother and sister.

Controversy With Mother and Sister

That month, a video surfaced online of Blueface’s mother and sister getting kicked out by Blueface from his apartment. It was reported that the two parties were arguing over Blueface’s newfound romantic partners. In the video, Blueface is seen kicking his sister down the stairs as she tries to approach one of Blueface’s alleged girlfriends. His mother can be heard in the clip yelling, “I love you. Take care of yourself.”

Another voice is also heard threatening to call the police. It is unknown whether or not law enforcement was involved in the incident. The debacle was exacerbated further when Blueface took to Instagram Live to call his mother a clout chaser. During the live stream, he says, “Sheesh, you know it’s getting hectic when yo own momma do it for the clout.”

His sister responded to these remarks on her own Instagram, writing, “Ain’t no free loading period everything you see me do I did for me. Sad what a bitch can do to a n***a head.” She went on to defend her mother and claim that she was the reason for Blueface’s success, saying, “You only got clout cuz of mommy stupid! How you think you got here? Saddest thing is she paid all those studio sessions when you was living in your car!”

In December of 2019, Blueface posted a video on his Instagram of him at Skid Row, an impoverished area of Los Angeles that has become synonymous in recent years with homelessness and poverty. In the video, he is throwing wads of cash from on top of his car, showering a crowd with money. The rapper called it “the season of giving.” However, many people online took offense to Blueface’s actions, accusing him of exploiting the homeless for his own publicity.

Following the death of Nipsey Hussle in March of 2019, Blueface suffered backlash for failing to pay respect to the L.A. legend. Being a popular artist from L.A., many fans believed that Blueface was obligated to say something about Nipsey Hussle’s death. In November of that year, during a No Jumper interview alongside Wack100, Blueface said little about Nipsey Hussle when his name was brought up.

He allowed Wack100 to explain that Blueface didn’t know Nipsey Hussle personally, and due to L.A. street politics, it wasn’t normal for Blueface to grieve for him. Just a month later, in December, the issue would be brought up again when Blueface posted a commemorative R.I.P. post on Instagram for Juice WRLD. Fans criticized Blueface for acknowledging the death of Juice WRLD, but not Nipsey Hussle.

The Future For Blueface

In March of 2020, Blueface released his debut studio album, “Find The Beat.” The title alludes to his off-beat style of rapping that critics have bashed him for. The project features artists like Gunna, Lil Baby, Polo G, Da Baby, Ambjayy, NLE Choppa, Stunna 4 Vegas, Jeremih, and YBN Nahmir. It sold 13k in its first week of release, which resulted in some criticism of Blueface online after the rapper deemed it the “best album of the year” months before. The album was announced in December of 2019 and had several delays.

Besides music, Blueface seems to be working on a personal project via OnlyFans, one that involves half-naked women fighting on camera at his L.A. mansion. In April of 2020, at the height of the pandemic, a video surfaced of multiple women in bikinis fist-fighting each other as Blueface egged them on. In the clip, he is heard yelling, “They going viral!” and “It’s going up!”

What was first believed to be a random, hot-headed incident between models for Blueface’s music video turned out to be a reality TV show of sorts. Blueface has received considerable backlash for ignoring social distancing protocols. Since the viral clip in April, Blueface has started a segment on his OnlyFans account called the “Bad Girls Club,” filming the daily experiences of 16 women who live in his mansion.

What the premise of the show is and what the girls are exactly competing for is unclear. However, it has been packed with drama so far, with clips of girls fighting in the house going viral seemingly every other week. Blueface has been relatively quiet in the past six months, both music-wise and antic-wise.

However, to start off 2021, the rapper was banned from Instagram for showing lewd content at the strip club on his Story. In typical Blueface fashion, the clip spread like wildfire on various social media platforms. The direction of Blueface’s career remains fairly murky at this point, as the rapper seems to be more concerned with having fun and going viral.

Blueface Declares Himself the ‘Best Lyricist’ in the Game | Complex

Blueface Will Never, Ever Stop Performing | The Rolling Stone

What Is Happening at Blueface’s House? | PopDust