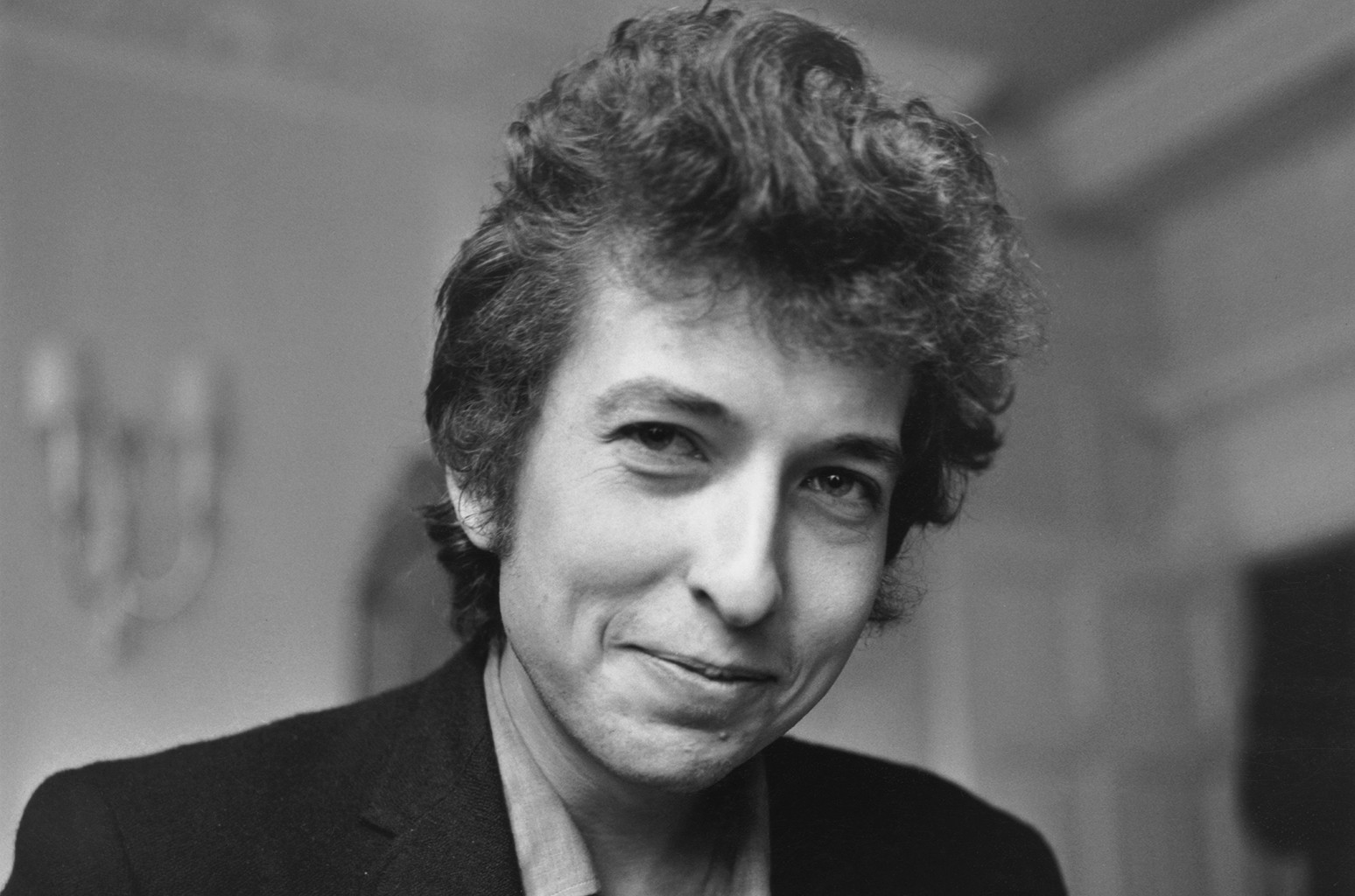 Songs such as “Mr. Tambourine Man,” “Just Like a Woman,” “Positively 4th Street,” “Desolation Row,” ‘Highway 61 Revisited,” “Blowin’ in the Wind,” “The Times They Are a-Changin,” and “Subterranean Homesick Blues.” One folk meets-blues-singer of historical prominence gave us all of those timeless songs that captured the era that they were written in like a daily newspaper that was getting read over the music. Bob Dylan emerged at a time when his music became interwoven with the Civil Rights Movement, open-minded college students of the day, peace-loving hippies, well-read bohemians, and intellectual lovers of poetry.

Bob Dylan was born under the name Robert Allen Zimmerman in St. Mary’s Hospital on May 24, 1941, in Duluth, Minnesota, and was raised in Hibbing, Minnesota, on the Mesabi Range west of Lake Superior in a close-knit Jewish community. During the early years of Bob Dylan’s life, he listened to the radio and became fascinated with blues and country stations from Shreveport, Louisiana, and as he became a teenager, rock and roll started to take hold of his attention.

Dylan’s early rock influences were Elvis Presley, Jerry Lee Lewis, and Little Richard, imitating Richard’s piano playing at high school dances. The two bands that Dylan formed back then were the Golden Chords, and another group he was the frontman for under the pseudonym Elston Gunn.

Folk music became a thing for Bob Dylan after he attended the University of Minnesota in Minneapolis. He performed folk and country songs at local cafés, with the spelling of his new name Bob Dylan being “Bob Dillon,’ taking inspiration from the Marshal Matt Dillon character in the Western television series Gunsmoke.

Dylan formed more than one band while attending Hibbing High School. One of them was called the Golden Chords, and this was a platform he used to perform cover versions of songs by Little Richard and Elvis Presley. The Golden Chords gave a performance of Danny & the Juniors’ “Rock and Roll Is Here to Stay” at their high school talent show that ended up being so amped up to such a blistering level of volume that the school principal cut the microphone off.

In 1959, Dylan’s high school yearbook carried the caption “Robert Zimmerman: to join ‘Little Richard.'” That year, as Elston Gunn, he performed two different shows with Bobby Vee, with his musical duties being to play piano and clap. Towards the fall of September 1959 is when Dylan moved to Minneapolis and enrolled as a student at the University of Minnesota, going on to live at the Jewish-centric fraternity Sigma Alpha Mu house, and performing at the Ten O’Clock Scholar coffeehouse several blocks away from campus.

Bob Dylan was a formative fixture of the Dinkytown folk music circuit, which was the period of time when he became continually presenting himself as “Bob Dylan.” If you are wondering what is with the spelling of “Dylan” with a letter ‘Y’ in it, the answer was made available in Bob Dylan’s memoir, where he said that he had considered the surname Dillon before he became aware of the poetry of Dylan Thomas, and decided upon that less common spelling. He would later saw in a 2004 interview that:

“You’re born, you know, the wrong names, wrong parents. I mean, that happens. You call yourself what you want to call yourself. This is the land of the free.”

If there is one place of planet Earth that is most associated with the formation of Bob Dylan, the first location that quickly comes to mind is the famed Greenwich Village section of Manhattan in New York City. When Dylan first arrived in Greenwich Village, he was playing music sets in miniature, grisly bars that were packed with beat poets. This was the ideal forum for his brand of western-folk songs with their mind-expanding idea woven in.

Eventually, we come to Dylan’s introductory album, the simply self-titled Bob Dylan, recorded in 1962 and pushed out into the world by Columbia Records. In all honesty, it barely sold 5,000 copies that first year. But make no mistake, this album made the music industry aware enough of Dylan that he was able to continue down a road of personal mythology in his music.

This debut record showcased his experiments with the harmonica and his intermingling of poetic folk music and the rock music of the day. It has been said that Bob Dylan actually stole the arrangement of this “House of the Rising Sun” arrangement from fellow Greenwich Village musician Dave Van Ronk.

In these days and times with home studio recording equipment extremely affordable, it is not impossible for your favorite singer to release music yearly or even bi-monthly if they can pump out their passion that quickly. But in the 1960s, the processing of recording wasn’t doable on a portable computer, there was a requirement of equipment you could barely carry, and even more than one person was likely needed. With that said, Bob Dylan’s prolific discography is even that more impressive, releasing albums practically to the point that you could almost count on a new one coming around each year like your birthday:

In 1963, with the civil rights movement in the United States in full swing and nuclear tensions with the Soviet Union climbing, in come’s Bob Dylan’s second album, The Freewheelin’ Bob Dylan. With the insistence of Dylan’s current girlfriend Suze Rotolo, Dylan began writing protest songs and then performing them, informed by the civil rights movement, the nascent anti-war movement, and the unsettling turmoil in America.

The Freewheelin’ Bob Dylan is the album that established Dylan both as a musician and political icon with its protest tracks, folk ballad love letters, and themes related to the civil rights movement, institutional racism, and America’s foreign relations. By mid-1963, his socially conscious image expanded by performing alongside Joan Baez at the March on Washington.

The year 1964 brought the arrival of his third album, The Times They Are A-Changin’, which also featured social commentary and societal injustices, featuring the strength of song number 6 on the tracklisting: “Only a Pawn in Their Game,” with standout lyrics like:

“A bullet from the back of a bush took Medgar Evers’ blood…Two eyes took the aim / Behind a man’s brain / But he can’t be blamed / He’s only a pawn in their game.”

Dylan is referring to the assassination of the civil rights activist Medgar Evers and the deeper realities of systemic racism at large.

Rebounding from the Newport Folk Festival

The summer of 1965 was the year that Bob Dylan was performing at the Newport Folk Festival and was famously booed off stage for the first time, amid the accusations he was selling out due to incorporating electric equipment into his sets that made hardcore fans feel betrayed.

When he began touring the next year in 1966, he mixed in both his older acoustic pieces and recent electric songs, which furthered the question of his authenticity, which fans described as Dylan “selling out and plugging in.” Dylan’s first totally electric album, Highway 61 Revisited and his follow-up Blonde On Blonde, went on to be hugely influential in pushing folk-rock music into new territories.

After a hurtful split with his wife, Sara Lowndes, trying to win her back with his song “Sara” on his album Desire, Dylan declared himself as a born-again Christian in 1979, even though he was raised by Jewish parents. The evangelical album Slow Train Coming was a commercial hit and helped Bob Dylan win his first Grammy Award.

From 1965 to 1977,Bob Dylan was married to his first wife, Sara Lownds. Along the way, Bob and Sara went beyond being a duo and expanded the occupancy of their home by having four children together: son Jesse Byron (born January 6, 1966), daughter Anna Lea (born July 11, 1967), son Samuel Isaac Abram (born July 30, 1968), and son Jakob Luke (born December 9, 1969). But she wasn’t the only one that Bob Dylan was involved with throughout his life as a rock musician:

The 1980s saw Bob Dylan touring full time and recording as the Traveling Wilburys with other legends that include George Harrison, Roy Orbison, Tom Petty, and Jeff Lynne. Folk music called Bob Dylan back in 1994, and he answered by taking home the Grammy Award in the category of Best Traditional Folk Album for his album World Gone Wrong.

Like his ex-partner Mavis Staples, Bob Dylan would also be inducted into the Rock & Roll Hall of Fame. On that day in 1989, superstar singer Bruce Springsteen spoke at Dylan’s induction ceremony, declaring that:

“Bob freed the mind the way Elvis freed the body. … He invented a new way a pop singer could sound, broke through the limitations of what a recording artist could achieve, and changed the face of rock and roll forever.”

Considering that in 1997 Bob Dylan became the first rock music performer to receive Kennedy Center Honors, which is the United States’ highest award for artistic excellence, it is safe to say that not only does Dylan’s resonate with listeners generation after generation, but it has been championed by critical organizations to be preserved for more generations to come.