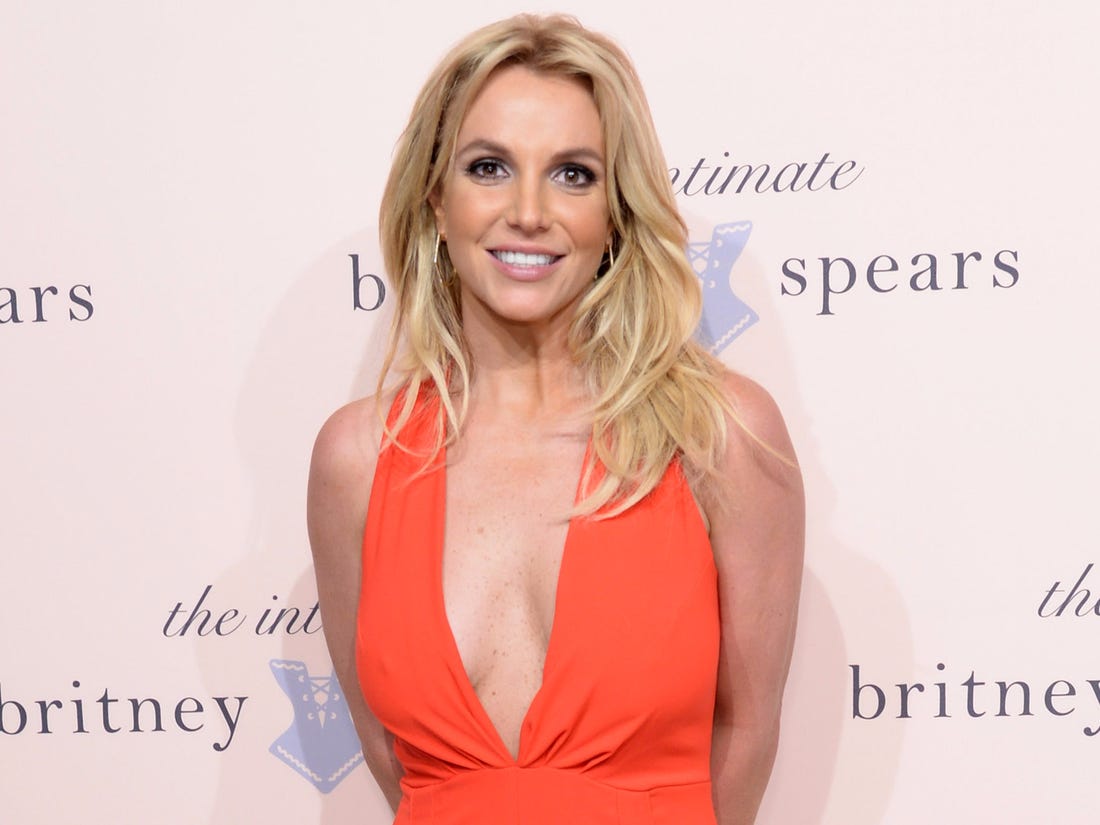 From Mouseketeer to Pop Princess, Britney Spears has been in the public eye for well over 20 years. With 7 original albums and over 10 compilations/box sets, Britney is no one-hit wonder. Follow along to learn everything you ever wanted to know about Britney Spears.

Born Britney Jean Spears on December 2, 1981, the Kentwood, Lousiana native found her passion early. Even with an older brother, Bryan James, and her younger sister Jamie Lynn, Britney never suffered from middle child mediocrity. Her family always treated her like a star. After beginning dance lessons at the age of three, she won several local and state vocal competitions.

Britney’s first audition for the Mickey Mouse Club was at age 8, but she was deemed too young to participate. It was this failed audition that led Britney to attend the Professional Performing Arts School in New York. While studying there, Britney landed her first professional role as the understudy to the lead in the off-Broadway musical “Ruthless”.

Britney’s time on the Mickey Mouse Club would turn out to be short-lived, as the show was canceled in 1994, the year after she was cast. Britney returned home to normal high school life in Kentwood and spent the next several years trying to get signed to a record label. In 1998, after submitting a demo track and performing a Whitney Houston song for executives, Britney was signed to Jive Records.

She worked with producer Eric Foster White for a month, where she trained her voice from its more classic “less Pop” alto into her signature Britney baby doll voice. With record label approval of her new vocal style, Britney headed to the studio in Sweden to record what would become her debut album

Britney’s debut album,”(Hit Me Baby)… One More Time”, would go on to help launch the new era of early 2000s pop divas. Up until Britney (and a few significant contemporaries, including her fellow former Mouseketeer, Christina Aguilera), pop music had become more focused on groups, such as the Backstreet Boys and the Spice Girls.

17-year-old Britney burst onto the scene in a sexualized school girl outfit and helped change that paradigm. The debut single from the album, the eponymous “… Baby One More Time”, would go on to debut at number one on the billboard hot 200. The album would go on to certify platinum 14 times. The album, and its accompanying singles and videos, walked a delicate tightrope. Britney was a teenager, and she was still clinging to her Baptist upbringing. Meanwhile, Britney the artist was using double entendres and bare midriffs to sell albums. These two sides of Britney would continue to be difficult to balance for most of Britney’s career.

Following up such a massive hit only a year later was a risky proposition. While the popularity of a pop star can fade quickly, and it is good to ride the wave of Britney mania into another hit album, there is also the risk of one album undercutting the other when people are buying, and may only be buying one album.

While Touring For “Oops!… I Did It Again”, Britney would confess that she had been dating her former Mickey Mouse Club co-star and touring mate, Justin Timberlake.

For the next several years, Britney rode a wave of success. She released her third album, “Britney”, in 2001, marking 3 consecutive years of album releases, and another number one debut.

She signed a multimillion-dollar promotional deal with Pepsi that same year, and performed “Slave 4U” at the MTV Video Music Awards, famously wearing an albino python and little else. In 2002, her first starring feature film role would be released: “Crossroads”. While no critical darling, the film performed well enough at the box office to be considered successful. Britney has not had any other starring roles since then but has continued to pop up in guest roles on television shows, and she hosted SNL for the second time in 2002.

By Mid 2002, Britney would end her 4-year relationship with Justin Timberlake. She became friends and collaborators with Madonna, With the two ladies eventually sharing a heavily publicized kiss on stage at the 2003 VMAs. Around the time of her breakup, Britney began studio work on her fourth album, “In the Zone”. After years of clinging to the trappings of Southern conservatism, this would end up her most overtly sexualized album yet.

“In The Zone” Tracklist

Britney dropped “In the Zone” at the end of 2003, to huge sales, making her the first woman to have four consecutive number one albums in the US. Unfortunately, this success would soon be overshadowed by her increasingly erratic behavior.

In January of 2004, Britney wed her friend Jason Allen Alexander in Las Vegas. The marriage was annulled within 55 hours. Eight months later, she married her backup dancer, Kevin Federline. The following month, she fired Larry Rudolph, who had managed her from the beginning. She released her first greatest hits album “Greatest Hits My Prerogative” in November of 2004.

By the beginning of 2005, her reputation had fallen to the point that she was preemptively banned from the Oscars, in the hopes that they would not become “a sideshow”.

In May of 2005, Britney and her husband, Kevin Federline, debuted the aptly named reality show “Chaotic” which followed their day to day lives. In September of 2005, Britney had her first son, Sean Preston Federline. A few months later, she was caught by paparazzi driving with her infant son in her lap, and entering a gas station bathroom barefoot.

One year (almost to the day) after giving birth to Sean, Britney delivered her second son, Jayden James Federline. Two months later, she filed for divorce from her husband. It took almost six months for Britney and Federline to reach a settlement. In the meantime, Britney famously checked herself in and out of rehab on the same day, and two days later, was caught on camera shaving her own head in a hair salon.

Tracklist for “My Prerogative”

In the midst of all this, Britney continued working. She produced what many consider her best studio album: “Blackout”.  It is considered one of the most influential dance albums of the 2010s and is number 441 on Rolling Stone’s 500 greatest albums of all time. A few months after releasing the album, Britney lost visitation with her kids.

In January of 2008, Britney was involuntarily committed to a psych hold at Ronald Reagan UCLA Medical center. She would remain in the hospital until February 6. After her release, she began to regain some visitation with her children, which continued to increase over the next several years.

In December of 2008, Britney released her sixth Studio Album, the aptly named “Circus”. This would go on to become her fifth number one album, and the lead single “Womanizer” would become her first Billboard hot 200 number 1 since “… Baby One More Time”.

In spite of all her personal complications in this time period, Britney was touring nearly constantly. Each album was followed by a tour, and she released 6 albums in 9 years. “Circus” made Britney the Guinness World record holder for the youngest woman ever to have 5 number one albums.

In 2009, Britney was placed by the court in a conservatorship controlled by her father for all financial decisions. This means that any business decisions, monetary expenditures, our major personal decisions that Britney makes go through a review process.

This has not slowed down her work output. In the ten years of her conservatorship, Britney has put out three studio albums, done multiple tours, been a judge on Tv’s the X Factor, and completed a residency in Las Vegas.

In 2011, she released “Femme Fatale”, her seventh studio album, and her most commercially successful, with three top ten US singles. While this album was no less successful, critics have noted that her creative input on her albums was much lower than in the past.

2013 saw the release of Britney’s eighth studio album, “Britney Jean”. As opposed to the distance critics noticed between artist and material in “Femme Fatale” Britney Jean was marketed as more personal, with the singer helping to pen every track.

To date, Britney’s final studio album is 2016’s “Glory”, her ninth. In the fall of 2019, Britney canceled a planned Vegas residency. Her longtime manager issued a public statement that Britney’s medications were no longer working, and she may never be able to work again. If this is accurate, glory will remain the swan song of the most successful female pop singer in a generation, if not ever.

There is a conspiracy theory regarding Britney on the internet. There are many people who believe that Britney is being held hostage by her father through the conservatorship. These people share the hashtag #FreeBritney. They investigate every Instagram post she puts out looking for secret clues: the color she is wearing, specific foot and hand positions, etc. Her family has been consistent in their statements that Britney is not being kept prisoner, and that she is free to come and go as she sees fit. Britney has asked the court to keep her under conservatorship, but to place an impartial attorney in charge, rather than her father.

Even through changes in music and culture in the last twenty years, Britney Spears has managed to remain culturally and musically relevant. Now you know all you need to about the Princess of Pop!