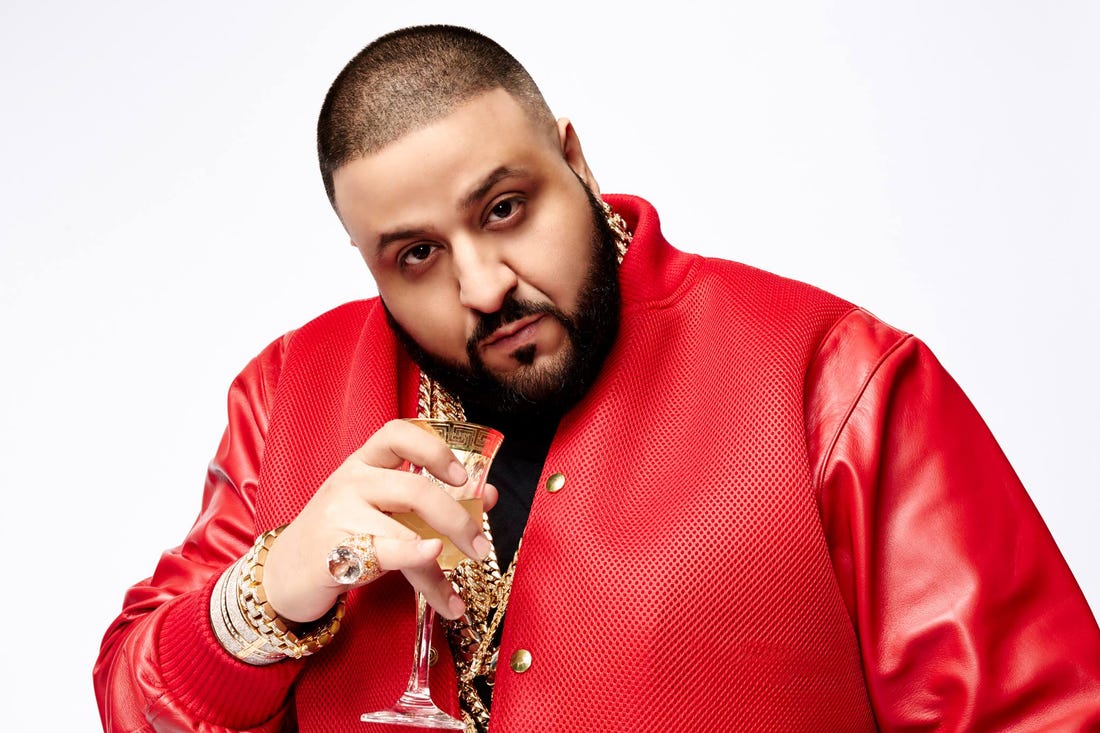 DJ Khaled, born Khaled Mohamed Khaled, is an American DJ, record executive, singer-songwriter, record producer, and media personality, was born in New Orleans, Louisianna, on November 26, 1975, to a Palestinian mother and father who immigrated to the United States. He has described himself in the press as a devout Muslim and had his first radio gig on a pirate station, before moving to Miami in 1998 and co-hosted The Luke Show on WEDR “99 Jamz” with the infamous 2 Live Crew’s Luther Campbell.

During his career, Khaled Khaled has used a variety of monikers which include”Big Dog Pitbull,” “Terror Squadian” (during his time with the hip hop group Terror Squad), Beat Novacane (a moniker under which he produces beats), The Don Dada, and Mr. Miami. But how did he grow into who we know him as today – DJ Khaled?

Fat Joe’s Terror Squad to We the Best

DJ Khaled gained prominence while working with Terror Squad that included Fat Joe and the late Big Pun as a DJ for their many – and exciting – live performances. After gaining a series of production credits on the group’s material, Khaled released his debut studio album Listennn… the Album in 2006, which gained a gold plaque.

The albums never slowed down with, We the Best (2007), with the top 20 single “I’m So Hood,” “We Global” (2008) and “Victory” (2010). He released these last two after he started the record label We the Best Music Group and they collectively charted in the top ten on the US Billboard 200, with the latter recording containing the single “All I Do Is Win,” which was a massive hit song all across the board earning certified triple platinum status.

DJ Khaled’s his debut album Listennn… the Album was released by Koch Records on June 6, 2006, premiering on the US Billboard 200 chart at number 12, followed by We the Best (2007), his second album with singles like “I’m So Hood” with auto-tune extraordinaire T-Pain, Miami’s Trick Daddy, Plies, and Rick Ross and “We Takin’ Over” with singer Akon, T.I., Rick Ross, Fat Joe, Birdman, and Lil Wayne.

When 2008 came around, Khaled’s third album We Global starting raging with singles blowing up all over the place like “Out Here Grindin” with Rap music stars such as Akon, Rick Ross, Lil’ Boosie, Miami’s Trick Daddy, Ace Hood, and Plies, followed by “Go Hard” featuring the pop stars Kanye West and T-Pain. “I’m So Hood” gave DJ Khaled a powerful Platinum hit to be proud of on June 4, 2008, along with winning DJ of the Year awards from both the BET Hip Hop Awards and Ozone Awards.

In 2009, DJ Khaled took on the role of a music executive when he was appointed the president of Def Jam South. His fourth studio album Victory was later released to the public on March 2, 2010, featuring guest appearances from world-wide superstars Drake, Lil Wayne, Rick Ross, Nas, Snoop Dogg, Ludacris, Nelly, and more. It was hard not to remember hearing the anthem “All I Do Is Win” everywhere that year, featuring Ludacris, Rick Ross, Snoop Dogg, and T-Pain. It’s grand exposure probably had something to do with it being a double-platinum single.

DJ Khaled’s next album title kept the “We The Best” name alive with its name being We the Best Forever and a new deal was in place after signing to Cash Money Records along with Universal Motown, the album is said to be released under the label, also under E1 Entertainment, Fat Joe’s Terror Squad, Def Jam South, and Khaled’s own label We the Best Music Group.

On December 10, 2011, DJ Khaled announced to his fans that the title of his next album would be Kiss the Ring. Via a video note, he claimed that the release date was “coming soon” – many presumed that it would be sometime in 2012. Guests on the album included artists such as T-Pain, French Montana, Future, Wiz Khalifa, and Nas, among others.

In January 2013, DJ Khaled then announced that he had started working on his seventh album, which was titled Suffering from Success. Where did that clever title come from? When Khaled went to a doctor because of a bald spot on his beard, the doctor told him he was “suffering from success.”

The first single from the Suffering from Success, “No New Friends,” features Rap superstars Drake, Cash Money’s Lil Wayne and Rick Ross, along with production coming from Toronto producers Boi-1da and Noah “40” Shebib. On June 10, 2013, it was announced by the performer’s camp that Suffering from Success would be released on September 24, 2013.

To add some sizzle to Suffering from Success, on July 25, 2013, Khaled publicly “proposed” to his fellow Cash Money, and the preeminent female rapper at the time, artist Nicki Minaj via MTV. He upped the ante on his offer with a 10-karat diamond ring from Rafaello & Co., valued at about $500,000, also reaffirming his proposal in an interview with Power 106’s DJ Felli Fel, stating that he ain’t a young man anymore and that he was seriously thinking about his future. He claimed that his love for her was more than a love you hold for a friend.

On July 29, 2013, in an interview with famed radio personality Funkmaster Flex, Minaj claimed that she denied Khaled’s proposal. She then clarified that she thought of the performer as a friend and that the proposal was just a joke.

Fans were critical of the proposal given that the very same day as the announcement, Flex also premiered Khaled’s new single, “I Wanna Be with You”, which featured Minaj, as well as frequent collaborators Future and Rick Ross. It became hard for anyone to believe that his proposal to Nicki Minaj was real, leading many fans and critics alike to believe that his proposal was a “publicity stunt” all along to promote his new single.

We the Best Brand

DJ Khaled then told the public in an interview with MTV on April 28, 2014, that Jay-Z would be featured on his new single. Khaled was filled with overflowing passion, to the point that he was cursing, gesturing, and tossing the microphone to the floor in an effort to convey the impact of the music he was cooking up for the summer.

On May 11, 2015, DJ Khaled announced that he and Cash Money Records amicably parted ways and that not only was he not signed to Cash Money any longer, but he had not been associated with the label for a while. He claimed that his former labelmates were friends and there was no bad blood between them.

DJ Khaled then released the third single off the album I Changed a Lot titled “How Many Times,” which featured the famed R&B singer Chris Brown, as well as rappers Lil Wayne and Big Sean.

The Keys to Success

In 2016, DJ Khaled wrote a book, The Keys, filled with his ideas on success, true-life stories, and contributions from other artists.

Khaled later signed a management-only deal with Jay-Z’s company, Roc Nation on February 29, 2016, and immediately thereafter announced his ninth studio album, Major Key, was going to be released in 2016 to splash the summer with major keys to unlock the door to the party, with infectious dance floor joints like “For Free” starring frequent collaborator Drake and his OVO squad members on production of Nineteen85 and Jordan Ullman. Major Key also had firepower from Kanye West, Big Sean, Lil Wayne, and Rick Ross, with another monster jam called “I Got the Keys” with rappers Jay Z and Future, which premiered following the telecast of the 2016 BET Awards.

Between late 2015 and early 2016, a number of Snapchat videos appeared of Khaled, which detailed his “key to success.” The videos received significant attention from the public due to his magnetic and larger-than-life personality. This newfound online recognition for the already well-known performer resulted in additional popularity. Khaled became an “internet phenomenon” as a result. To this day, some have even described the performer as a “living meme.” In October 2016, Khaled would also showcase his talent in advertising campaigns for the alcoholic beverage Cîroc Mango. He also starred in “Let’s Get It: Khaled’s Odyssey,” an episode of Let’s Get It.

Nicole Tuck, DJ Khaled’s wife, gave birth to their son, Asahd Tuck Khaled, born on October 23, 2016. Khaled actually live-streamed the birth on his Snapchat account. Then on January 20, 2020, they had their second son.

On December 24, 2016, Khaled jumped up on the Twitter platform to let the world know it was going to be tenth album time for Mr. We The Best. In January 2017, the famed baby was seen in the studio on Snapchat with a star-studded bunch by the likes of Chance the Rapper, Justin Bieber, Migos, and Mariah Carey.

In January 2017, Khaled bought Robbie Williams’s former house in Mulholland Estates, a gated community in Los Angeles, California, and the following year he became the owner of a waterfront property in Miami for $25.9 million. DJ Khaled was inspired by his own personal home and lifestyle and it prompted him to design a new luxury furniture line, titled ‘We the Best Home,’ no surprise there.

On March 5, 2019, Khaled then announced his eleventh studio album titled Father of Asahd, which he claimed would be released in May 2019. In anticipation of the album, he released several music videos for the album’s new songs, like “Top Off” with Beyonce and Jay-Z, “Wish Wish” with Cardi B and 21 Savage, “You Stay” with Meek Mill and Jeremih, “No Brainer,” and “Higher,” featuring Nipsey Hussle and John Legend, a track which also garnered Khaled his first Grammy Award, multiplied by the fact that Nipsey Hussle had already passed away and his fans were able to have something new from the fallen community-driven rapper.

On July 16, 2020, DJ Khaled announced his 12th studio album, which would be titled, Khaled. The announcement was accompanied with a video trailer documenting his life and career, including the birth of his sons that have inspired him so, and winning his very first Grammy Award. He also worked on the soundtrack for the Bad Boys II Movie, “Bad Boys for Life” at the urging of Will Smith.

DJ Khaled is known for screaming out the name of his company, “We The Best,” in a proclamation of their unstoppable reign of hit records as if it was raining contagious tunes in every studio session that he embarks on. He is also a conductor of A-List rappers and vocals, managing to get a who’s who of any dominant performers from any region. Do you want some of that southern hospitality with your hip hop anthems? DJ Khaled can call up Rick Ross and Lil Wayne. If you’re in the mood for some catchy west coast cruising around the coast, the Khaled catalog has some Kendrick Lamar or Snoop Dogg for your taste.

Canadian Khaled fans love his Drake classics or some PartyNextDoor. For some Caribbean vibes, Khaled can cook up with Buju Banton or Mavodo. The head-spinning east coast lyricism can come courtesy of Nas, 2 Chainz, and Busta Rhymes over DJ Khaled beats In the Midwest Kanye West, and John Legend records are deep in Khaled’s collection too. To make a long story short, DJ Khaled’s album track listings are like opening Christmas presents all at once when your eyes scan over them.