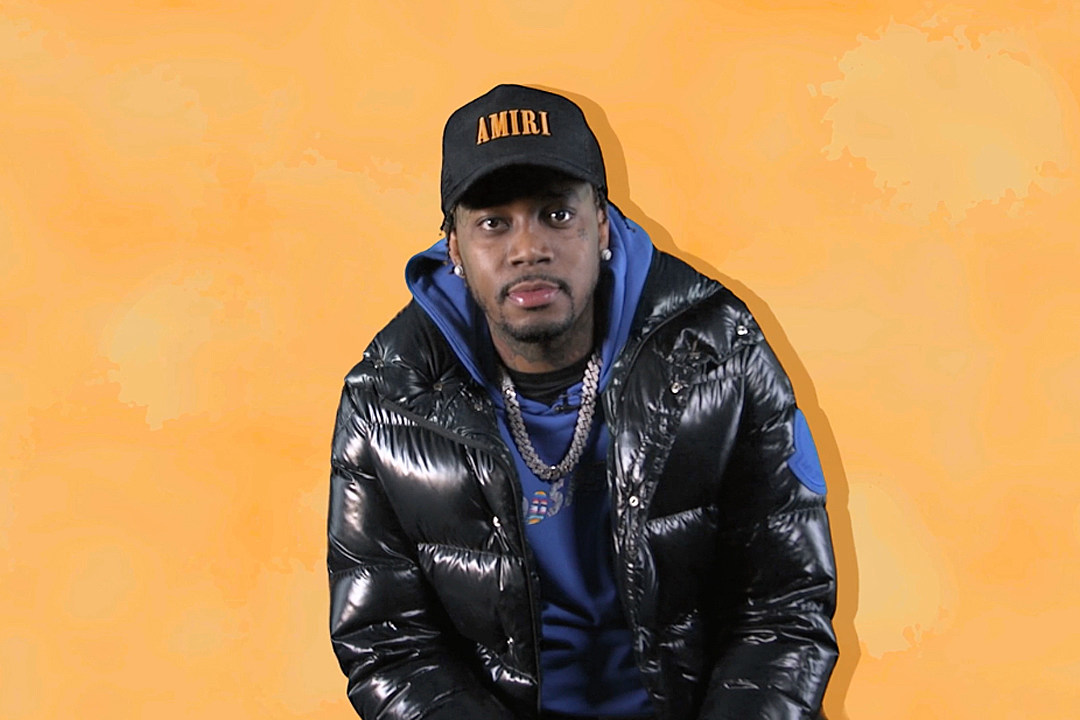 Hailing from Brooklyn, Maxie Lee Ryles III started rapping under the name Lite Fivio in 2011 before changing his name to Fivio Foreign. His stomping ground was East Flatbush, the home of rappers like Busta Rhymes, Casanova, Special Ed, and Rampage.

An NPR article from the early 2000s paints a picture of a young Fivio visiting a childhood friend in Connecticut: a free-spirited, mathematically-inclined little boy from the inner city Brooklyn school P.S. 221, ready for a summer of swimming and trading Pokemon with his friend Tyler.

Lite Fivio, as he was known at the beginning of his career, founded the artist collective 800 Foreign Side, which included rappers Scrappy Loc, Gino Mondana, Swipey, Money Tree, Killa Cash, Fly Gotti, and others in 2013. It was then that he changed his name to Fivio Foreign and began releasing EPs.

Pain and Love, which came out November 13, 2019, under the labels RichFish and Columbia, peaked at #23 on the Billboard Heatseekers chart. The Heatseekers are weekly issued charts by Billboard Magazine of new artists who are “breaking and entering” onto the music scene before they make it big. The idea is to highlight these up-and-comers and gain a little more word of mouth with a list of the Top 25 that week.  Pain and Love had a total of four tracks – “Big Drip,” “Pop Out,” “2 Cars,” and “It’s Me.”

“Big Drip” was the clear standout of the album, with a clip of the song going viral on TikTok and a music video produced by AXL BEATS with almost 50,000,000 views on YouTube. In it, Fivio and his friends take over an ice cream truck in Brooklyn Bridge Park and jump into a pool with floaties and Super Soakers. It’s high summer anthem energy despite its September release. Pitchfork called it “the must-hear rap song of the day,” on their list of The Ones – a daily post on their website to highlight the one song they feel audiences need to hear on that day. Alphonse Pierre wrote of the track: “Compared to the ahead-of-the-beat deliveries often wielded in Brooklyn’s rap scene, Fivio drags out every line, saying more in his ad-libs than his actual verses. Though he’s patient, his music is still high-energy—and the music video filmed in front of confused Brooklyn Bridge Park attendees adds to the chaos.” The record went certified Gold and peaked at #25 on Billboard’s R&B Hip Hop chart as well as #25 on Hot Rap Songs.

His second EP, 800 BC, featured eight tracks: “Drive-By”, “Wetty,” “Big Drip,” “Demons & Goblins,” “Awesome,” “Ambition,” “Issa Vibe,” and “Big Drip (Remix).” For the remix of “Big Drip,” he was joined by Lil Baby (Dominique Armani Jones, a rapper and singer-songwriter from Atlanta), and Quavo (Quavious Keyate Marshall, a rapper, singer-songwriter, and record producer from Athens, Georgia). Pitchfork gave the album a 5.8, saying that the additional verses in the “Big Drip” remix felt unnecessary. Of “Demons and Goblins,” a collaboration with Meek Mill, they said that the lyrics sounded “like it was filled in with predictive text from his most commonly used words.”

“Wetty” was a quick fan favorite, including another richly visual music video produced by AXL BEATS. Hypebeast wrote: “Fivio continues to offload his rolling Rs and street-centric rhymes, detailing everything from his wordplay to his opps, getting women and luxury whips, and more. The visual for the track reflects a modern interpretation of the infamous Bonnie and Clyde tale and was filmed at a local bodega in Brooklyn.”

In February of 2020, Fivio collaborated with rapper Pop Smoke (Bashar Barakah Jackson, also of Brooklyn) on Pop’s second mixtape, Meet the Woo 2 for a track called “Sweetheart.” NME praised the track lavishly, gushing, “No matter if you live in London or New York, every drill fan prays for a Pop Smoke and Fivio Foreign collaboration. Well, ‘Sweetheart’ is everything we wanted. Fivio’s distinctive Brooklyn accent and Smoke’s husky voice mesh beautifully over this racing drill beat. It’s truly menacing.” Critic Kyann-Sian Williams went on to say, “When you put together Fivio’s persistent high-energy and Smoke’s silent-but-deadly approach, the New Yorkers harness the essence of real king-pins. They’re like Top Boy‘s Sully and Dushane; the brazen Fivio reminds us of Sully and Pop Smoke’s laid-back nature evokes that of Dushane. And these top boys have crafted an unforgettable classic.”

Just two weeks later on February 19, 2020, Pop Smoke was shot and killed in a home invasion. The rapper had accidentally revealed his address in an Instagram post from earlier in the evening, and four men broke into his home in the early hours of the morning wearing ski masks and brandishing handguns to rob him. He was rushed to the hospital where he later died. His death was mourned by a legion of fans as well as his Brooklynite brothers, and Fivio was particularly devastated, just coming off the high of recording and releasing “Sweetheart.”

“I learned everything [from him].” He said in an interview with NME, who had lauded his collaboration track only weeks before. “I learned how to deal with this shit and not to get hyped over the now. Once you find yourself hyped or comfortable with the shit that is happening, you won’t really go further. It’s the bigger things you got to work on.”

In July of 2020, he spoke to VLADTV expressed vengeance-fueled disappointment that Pop Smoke’s killers were locked up and he couldn’t meet them “out in the streets.”

With two EPs, one full-length, under his belt, Fivio lent his vocals to verses for collabs with other notorious artists. Drake’s “Demons” dropped in May of 2020, off his mixtape Dark Lane Demo Tapes. The track features Fivio and Sosa Geek. Rolling Stone called the mixtape Drake’s “gloomiest release ever,” 14 tracks of soul-searching and deep aching. The New York Times called it “a mostly sharp document of top-dog anxiety and solipsism,” and speculated that Drake was “isolated at the top” long before the quarantine. Fivio’s verse in “Demons” alternates between bars about a woman he’s involved with and putting “opps” (opposition, or rivals) in their place. He may have been thinking about that same good old fashioned street vengeance he wanted for Pop Smoke’s murderers when he wrote: “I’m in the court like “I’m sorry, your honor/I killed the opp, but I ain’t catchin’ no karma.”

“Zoo York,” another May 2020 release by Lil Tjay, featured Fivio and a posthumous Pop Smoke. The term “Zoo York” was coined in the 1970s and inspired by graffiti artists tagging the tunnel that runs under the Central Park Zoo. It’s now a style and social philosophy as well as a skateboard fashion company marketing boards, T-shirts, and hoodies.

Pitchfork also lamented the loss of a possibility of future Lil Tjay and Pop Smoke collaborations, giving the album State of Emergency a solid 6.7 and writing of “Zoo York”: “a beat that carries all the familiar Brooklyn drill hallmarks—engulfing womp-womp bassline, foggy keys, a general sense of peril—it reasserts the lost potential of a Pop-Tjay team-up full-length record to be a catastrophe for the culture.” The song peaked at #65 on US Billboard, #28 on R&B/Hip-Hop, and #25 on Hot Rap Songs.

He also released “Bop It” as a single in early October, a nod to the 1990s childhood toy of the same name, with the chorus ringing out in the same cadence as the original commercial: “Grip it! Click it! Hit it! Spin it!” The track was inspired by a meme Fivio saw of himself saying that he “rapped like a Bop It,” referring to his trademark style of calling out his bars as if he is listing them off.  “I kept seeing this viral meme of me on Twitter and Instagram, they was saying I rap like a ‘bop it,’ had my face on it too,” Favio explained in a press release. “I was in the studio and Kenny Beats was like ‘I’m gonna give you a beat like that.’ Polo got on it and we turned lemons into lemonade.” The music video brought back the Super Soakers hearkening back to Fivio’s previous summer anthem “Big Drip,” and even came complete with a viral TikTok dance tutorial led by TDott Woo.

Fivio was recently included in XXL Magazine’s Annual Freshman Class List for 2020, a yearly release where the editors hand-pick ten up and coming original artists that are fairly new to the scene to keep an eye on. The list includes underground rappers as well as rappers on the rise. After the year Fivio had, he had definitely earned his spot in the Freshman Class alongside “classmates” Polo G, Chika, NLE Choppa, Jack Harlow, Lil Keed, Lil Tjay, Calboy, Rod Wave, Baby Keem, 24kGoldn and Mulatto. Pop Smoke was also chosen as the first artist of the 2020 class before his death in February, and the issue includes an interview with the late, beloved Brooklyn rapper.

On Saturday, October 10, Fivio was arrested for domestic assault of his girlfriend at the Alexander, a luxury high rise condominium complex in Edgewater, New Jersey. Allegedly, Fivio punched her in the back of her head, kicked her and hit her in the leg with a glass bottle, before pushing her out into the hallway without any clothes on, according to an affidavit filed with Edgewater Municipal Court. The girlfriend, whose name is not publicly known, is 24 and pregnant with the couple’s second child. Fivio maintains that he is innocent, and that the couple were arguing about “relationship issues” when she threatened to call the police and claim that he had attacked her. Their five-year old daughter was sleeping in a room nearby. He was held in the Bergen County Jail until October 16, when he made the following statement about the incident on Twitter: “I appreciate y’all support and concerns and prayers… But I ain’t Neva hide nuffin I do or deny who I was. I wud neva hurt or harm any pregnant woman especially not my GF. My mother wud kill me, plus I’m raise’n 2 blacc lil gurls. & Woman do everything for me in my life.”

In 2020, Fivio founded Foreignside Foundation, with the goal of the non-profit organization to “build a positive network within communities to supply financial assistance to families in need, constructive alternatives for at-risk youth and resources to keep individuals safe and out of trouble.”

Inspired by his own troubled youth fraught with loss, homelessness, and gang violence in the streets, Foreignside Foundation is an outreach program for at-risk kids currently and formerly affiliated with gang culture or drugs. The organization offers several programs including Youth Development, Community Development, Inmate Care, Burial Assistance, Music & Arts, and Employment Opportunities – as well as PPE Giveback, an effort to equip the community and local hospitals with medical necessities to prevent COVID-19.

In a mission statement on the organization’s page, Fivio writes: “I want to offer outlets for my community and be a positive example of how someone can change their path and create a positive life for themself. I want to use my influence to help underprivileged people who may not have the support they need and  I want to educate people to make better choices for themselves and their families. If we can uplift our community one neighborhood at a time then we can change the quality of life for our future generation.”