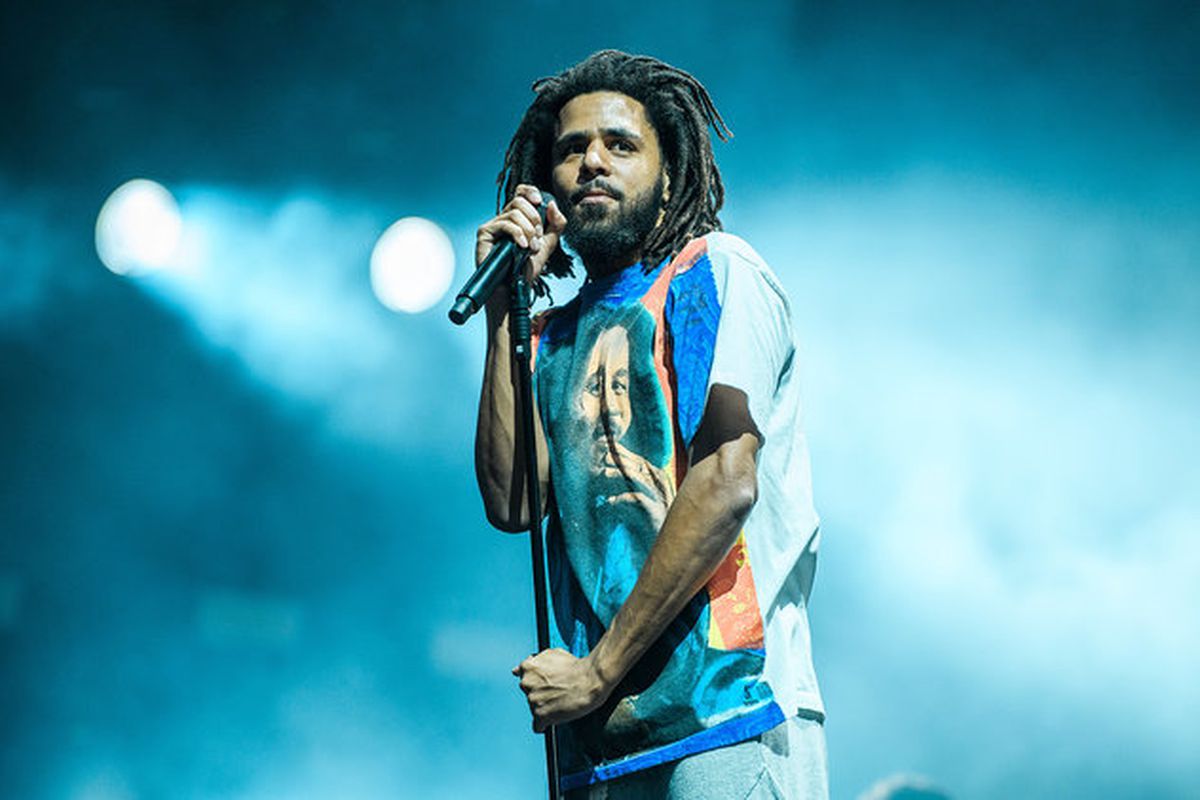 Jermaine Lamarr Cole is more popularly known to the world as the highly respected hip hop artist J-Cole, was born on January 28, 1985, at an American military base in Frankfurt, West Germany to an African-American father who served in the U.S. Army and a white American woman who was a postal worker for the United States Postal Service.

Cole’s father, unfortunately, didn’t stick around with his family, forcing Cole’s mother to later move him and his older brother Zach back to the United States, to Fayetteville, North Carolina, to be exact, when Cole was just eight months old. But even with a fractured nuclear family unit, J. Cole still emerged as the influential creative inspiration that he is today, with a background story just as interesting.

Straight Out of Fayetteville, North Carolina

J-Cole had an affinity for both basketball and music while he was still young and musically at the time, he was a first-chair violinist for the Terry Sanford Orchestra until 2003.

J-Cole began rapping at the age of 12. But the year 2000, J-Cole started considering it as a potential profession, especially after his mother purchased him an ASR-X musical sampler as a Christmas gift.

This toughing gift led Cole to put extra emphasis on expanding his production skills, later beginning initial production under the pseudonym Therapist. But this got switched when later realized that “Therapist” could be misread as “The Rapist” with both containing the same letter. Cole collaborated with local group Bomm Sheltuh as a rapper and producer.

Education was a strong area of focus for J-Cole, graduating from high school, and accepting a scholarship to St. John’s University. First, J majored in computer science but converted that over to communication and business after he saw first-hand how lonely the life of a computer science professor could end up being.

Cole officially received his degree eight years later during a homecoming concert in 2015, where he revealed that he had owed money for a library book, and therefore the university held back from granting him his degree.

Cole worked several part-time jobs in Fayetteville, North Carolina, such as a kangaroo mascot at a skating rink, a newspaper ad salesman, a bill collector, and a file clerk.

Hip Hop on His Mind

Musical inspiration for J-Cole came from Canibus, Nas, Tupac, and Eminem. In the early days, Cole and his cousin worked on their rhyming, wordplay, and how to incorporate storytelling within their lyrics. At age 14, J-Cole had filled out countless notebooks that were overflowing with song ideas. However, he was unable to produce beats further than sampling at the time.

Cole’s production talent grew to the point that he was able to create an entire CD’s worth of instrumentals and made the trip over Jay-Z’s Roc the Mic Studio, aiming to play it for Jay Z while he was creating the American Gangster album. Cole waited for over three hours but was dismissed by Jay Z. All was not lost because Cole used those beats he made as the basis for his debut mixtape, The Come Up.

J-Cole and Jay-Z would meet again, this time it would be to agree on Cole becoming the next J in the building at Jay-Z’s Roc Nation record label. J-Cole signed his record deal with Roc Nation on February 24, 2000 after he turned 24-years-old, with his close friend and business partner Ibrahim Hamad.

From Mixtapes to Roc Nation

The next year and decade began first thing in January of 2010 with Cole, label mate Jay Electronica and Mos Def hopping on the classic Talib Kweli and Hi-Tek’s single, “Just Begun.” The guest appearances didn’t stop there. J also hopped on B.o.B’s mixtape on May 25, 2010, and on the song “Gladiators” produced by the prolific sound master The Alchemist.

J-Cole was everywhere in 2010, including XXL Magazine’s 2010 version of their famed Top Ten Freshmen list. He started a college tour between March 19, 2010, to April 30, 2010, hitting up popular college institutions such as Rutgers University and Syracuse University.

Cole contributed a featured verse on Young Chris’ song “Still The Hottest” and made the same good gesture for Miguel’s debut single “All I Want Is You.”

The celebration was in order for the anniversary of the release of The Warm Up mixtape, which led to J. Cole releasing a freestyle called “The Last Stretch” on June 15, 2010.

Six days later, on June 21, J. Cole premiered his music video for the very first single of his career“Who Dat” on the BET program 106 & Park and continued to fan the flames for the fire that he had been sparking all along. In August 2010, Cole received the UMA Male Artist of the year award due to the critically-acclaimed The Warm Up mixtape and record deal with Jay-Z’s label Roc Nation.

J-Cole albums may not saturate the audio landscape every year. But when he does a drop these entries in his collection they are treated like events:

J-Cole has also had his fair share of hit singles to go with the critical acclaim that he has continuously garnered:

The awards that J-Cole has amassed are already growing at a rapid rate:

Don’t think for a minute that J-Cole only used his communications skills and ignored his business side when he graduated from St. John’s University with a focus on communications on business. Cole has more than dug deep into business and entrepreneurship in addition to being a creative:

J-Cole established The Dreamville Foundation, a 501(c)(3) non-profit organization in October 2011, designed to bridge the gap between opportunity and urban youth in Fayetteville, North Carolina. With volunteers, the Foundation conducts an annual “Back To School Supply Giveaway” to provide supplies to grade school kids and other philanthropic efforts.

The Dreamville Foundation also established a book club for young men, sponsored “The Nobody’s Perfect Writing Contest and Mother’s Day Brunch” for students, along with an annual weekend of Fayetteville community events called the “Dreamville Weekend.”

J-Cole talked about his love of music and basketball with The Players Tribute, and spoke about intentionally moving back to the room he rented in Jamaica, Queens in New York City to get that feeling of hunger again to zap him into the levels of creativity he was challenging himself to return to:

“For the next three months I would wake up in that old, familiar room, putting myself through morning writing drills before heading off to Electric Lady Studios with a short term plan to finish the ‘4 Your Eyez Only’ album before the arrival of my first child.”

Aside from being the rap star that represents for everyday men and women without focusing on materialism, J-Cole is also a husband to his wife Melissa Heholt, who he actually attended St. John’s University with. She works as the Executive Director of his Dreamville Foundation.

In J-Cole’s world, handling your responsibilities to those that you love doesn’t have to be reduced to something corny. He still makes time to advance his art, support the blight of disenfranchised black people in his community and beyond, and work directly with youth, providing opportunities for them to be able to see hope come into focus, and not just a revolving door of poverty and limited options that could send them to jail.

As a black man with a white mother, J-Cole has seen the racial divide from a front row vantage point, and has had the ability to nurture his prospective to stimulate unity, important conversations around disparity and stigmas, and he has done it all without compromising his morals, ethics, and authenticity. It also doesn’t hurt that his rapping skill level can still deliver above and beyond many of the lyricists that have come before and after him because of colorful wordplay, honest remarks, and a dedication to improving his craft.