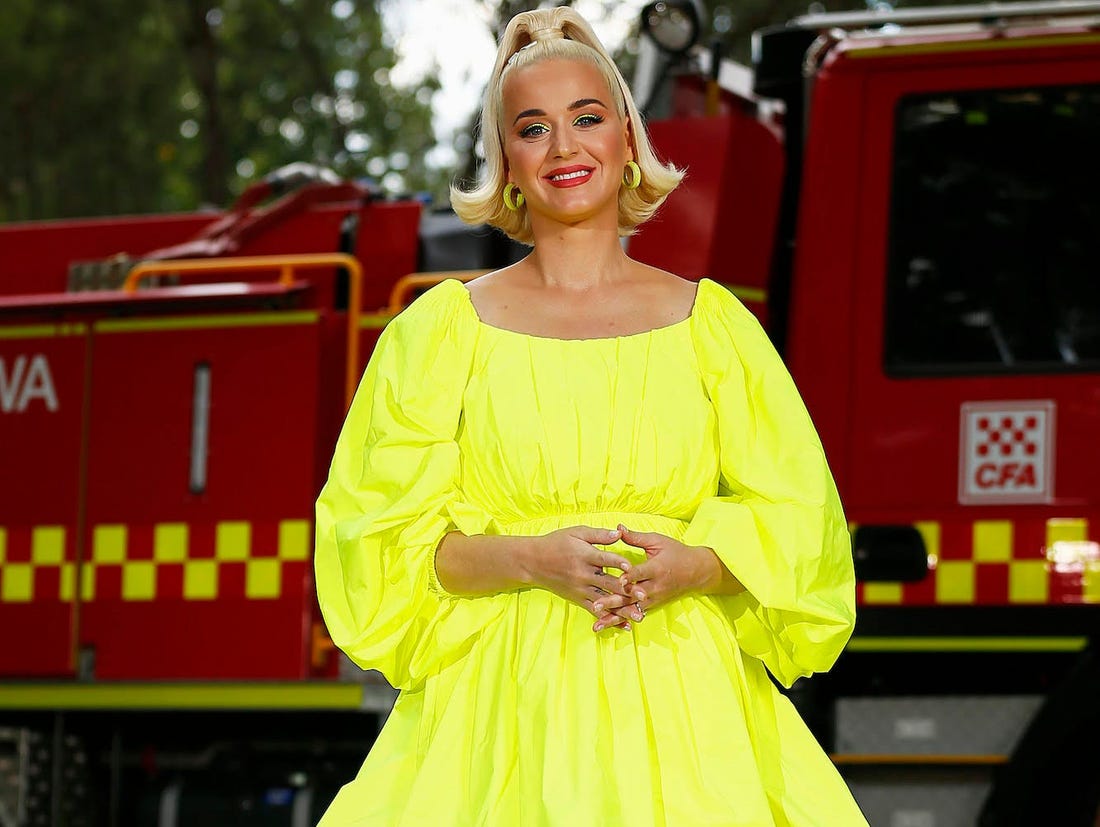 From sultry pop star to reality show judge, Katy Perry is one of the most recognizable stars in the music industry. Read on to learn how she rose from gospel singer to sex symbol.

The Woman we all know as Katy Perry began life as Katherine (Katy) Elizabeth Hudson on October 25, 1984, in Santa Barbara, California. Her parents, Mary and Maurice Hudson were born again Pentecostal pastors. Katy spent her childhood moving regularly while her parents planted churches across the country. By the age of 11, Katy’s family would settle back down in Santa Barbara, where they would remain through her teenage years.

Her family faced financial difficulty, relying on food stamps and food bank donations, but still managed to send Katy to a Christian school. Her strict religious upbringing was consistent across all aspects of her life. Katy and her siblings were not allowed to listen to secular music, and Katy’s first foray into professional music was as a gospel artist.

Katy got her GED at the age of 15 so that she could focus on music. Katy’s self-titled first album, 2001’s “Katy Hudson”, was a gospel-inspired Christian record that was not commercially successful. After the failure of “Katy Hudson” to perform well, Katy moved to Los Angeles to seek a career as a secular artist. Wanting to avoid confusion with popular actress Kate Hudson, Katy started work as Katherine Perry (from her mother’s maiden name) before settling on Katy Perry. Seemingly finding freedom from her strict religious upbringing, Katy’s early solo work focused on sexual and LGBT themes but often came across more as someone who wanted to understand those cultures than someone who was already involved in them.

Her first EP, titled “UR So Gay” was released by Capitol Records in 2007, to mild interest, mostly due to it’s quirkily named title track. Several months later, she made a much larger splash with the release of “I Kissed a Girl” the first track from her full length “One of the Boys” album.

The track raised controversy from the right and the left, with some complaining of the promotion of homosexual attraction, and others complaining that the song (and it’s accompanying video) was more about straight male wish-fulfillment than an accurate representation of bi-curiosity. In spite of (or because of) the controversy, “ I Kissed a Girl” reached number one on the charts. “One of the Boys” eventually sold over a million copies, largely due to the success of the first track, as well as the second single “Hot N Cold”.

Katy quickly became a paparazzi favorite, due in large part to her natural good looks and quirky, flamboyant personal style. By incorporating elements of Anime culture with 1940s burlesque, Katy had created a style all her own, and the tabloids loved her for it. Pair this with her propensity for dating famous men, starting with flamboyant comedian Russell Brand, and Katy remained firmly fixed in the public eye from the beginning.

Two years after the release of “One of the Boys”, Katy headed back to the studio to record what would become 2010’s “Teenage Dream”. By mixing in traditional summer pop tracks (“Teenage Dream”) with more diva-style girl power anthems( “Firework”) Katy was growing close to finding her artistic voice that she has remained fairly true to for the rest of her career.

A collaboration with the ever-popular Snoop Dogg (California Gurls) didn’t hurt album sales either. With this album, Katy managed to tie Michael Jackson’s record of five number-one singles from one album and would go on to win an Album of the Year Grammy. Katy continued her great year in 2010 with her marriage to Russell Brand in a Hindu ceremony in India. The launch of her first perfume and a lucrative partnership with EA for an expansion of their popular game “The Sims 3” meant that Katy Perry was everywhere.

After 14 Months of marriage, Katy and Russell Brand divorced, citing conflicting work schedules and different desires on when and if to have kids. Katy spent the next year touring and working on TV projects and started a well-publicized romance with singer John Mayer.

By her own account, Katy Spiralled into depression after her divorce from Brand, which led to more introspection and a slightly darker, or at least more mature, the tone for her next album, 2013’s “Prism”. “Prism” continued to show off Katy’s ability to belt powerhouse vocal anthems (“Roar”), and still maintain her strong pop sensibilities.

The album debuted at number one on the Billboard 200, and the first and third singles from it “Roar’ and “Dark Horse” (with Juicy J) became her eighth and ninth number-one singles. Katy went on to perform at the 2015 Super Bowl Half Time Show, along with special guests Missy Elliot and Lenny Kravitz.

Her performance would go on to become the highest-rated Super Bowl halftime show in history. 2014 saw Katy found her own record label, Metamorphosis Music, allowing Katy to transition from pop star to producer. Katy continued acting, appearing (in a voice role) as Smurfette in “The Smurfs” and “The Smurfs 2”.

In 2016, Katy announced she would be a judge for the upcoming revival of “American Idol”, a deal that reportedly netted Katy 25 million dollars a year contractually, and taking over a seat formerly held by stars like Mariah Carey and Nicki Minaj. 2016 also saw Katy begin her on again/ off again relationship with future fiance, actor Orlando Bloom.

Katy’s fifth studio album, 2017’s “Witness” debuted at number one, to mixed reviews. Katie was experimenting with different musical styles, and the album faced a mixed critical response. The album didn’t produce any number one singles but was still reasonably successful overall.

Perhaps the most notable element of the album is the diss track, “Swish Swish”, a thinly veiled response to her very public feud with frenemy Taylor Swift that dates back to 2013. The two pop princesses had been huge fans of each other and were seen as close friends in the public eye from 2009, until 2013, when things went awry. The basic accusation is that two dancers on Swift’s “Red” tour left to tour with Katy Perry for her Prism tour.

According to the dancers, they were closer to Katy from their time on her earlier tours, and they “weren’t dancing much anyway” for Swift. The dispute is mainly one of intent- Perry said she simply asked her friends and former dancers if they were available, and their choice to leave or stay was simply a business decision of their own.

Swift and her fans viewed it as a betrayal by a friend, and a breach of general etiquette to poach employees from a colleague and friend. By most accounts, this never led to a direct confrontation. Katy insisted later that she never even realized there were any bad feelings.

Theoretically, the beef faded, until Swift’s 2015 album “1989” and the single “Bad Blood”, a song which Swift announced in a Rolling Stone interview was about another popular singer who Swift accused of “sabotaging an entire arena tour”. Their history of dating the same men probably also came into consideration, along with Taylor Swift’s well-known propensity to pour hurt feelings into her song lyrics.

In the lead up to the release of “Witness” Katy was asked if she planned to include a response track by entertainment weekly. Her reply “‘One thing to note is: You can’t mistake kindness for weakness and don’t come for me,’ she said. ‘Anyone. Anyone. Anyone. Anyone. And that’s not to any one person and don’t quote me that it is, because it’s not. It’s not about that’,” sums up her intentions fairly succinctly.

The release of “Swish Swish” was Katy’s public reply to the track and the rumors going around the music industry. With Lyrics like:

For more than a minute, get used to it

Funny my name keeps comin’ out your mouth

‘Cause I stay winning”

Katy was making it clear that she was ready to deal with the rumors, accusations, and conflict directly. Her appearance on SNL to perform the song is also notable for introducing the world to the teen known as “backpack boy”, and his dance that became known as “flossing”, a move that has become infamous due to its inclusion in the hugely popular video game ‘Fortnight”.

With the slightly less warm reception for “Witness” and all of the drama surrounding her public feud with Swift, the last several years have been a mixed blessing for Katy Perry. 2018 saw Katy and Taylor Swift begin reconciliation on their 5 years of “bad blood”, with Katy sending Swift a congratulatory letter on the beginning of her new tour, and Katy’s 2019 appearance in the video for Swift’s “You Need to Calm Down” (an appropriate title, for all parties involved).

Katy was sued in 2019 for copyright infringement of Flame’s song “Joyful Noise”, with the singer alleging her hit “Dark Horse” took material elements from his original composition. A Jury agreed, awarding him $550,000 in lost royalties and penalties.

Katy was also accused of “pantsing” her “Teenage Dream” music video star in front of her male friends. She has denied his sexual misconduct claims, and so far there are no legal actions publicly filed.

On a positive note, Katie has continued her lucrative judging duties on American Idol alongside Lionel Richie and Luke Bryan. Katy released a stand-alone single titled “Never Worn White” in March of 2020 and followed that a few days later with the announcement that she and Orlando Bloom were expecting their first child. The first single from her most recent album “Smile”, titled “Daisies” was released two months later. The album was released in August of 2020.

Just a few days before the release of “Smile”, Katy was given a huge reason to smile, as she gave birth to her first child, Daisy Dove Bloom, with partner Orlando Bloom.

Katy Perry has been a source of controversy since the beginning of her career. While those controversies defined her career, they have kept her name on people’s tongues. Katy is a perfect representation of the old adage “there is no such thing as bad publicity”. Katy has built a multimedia empire- clothing, shoes, perfume, music, acting, and judging. She built this on a rare combination of talent, sex appeal, and managing to stay interesting enough that people will continue to watch her for a long time.