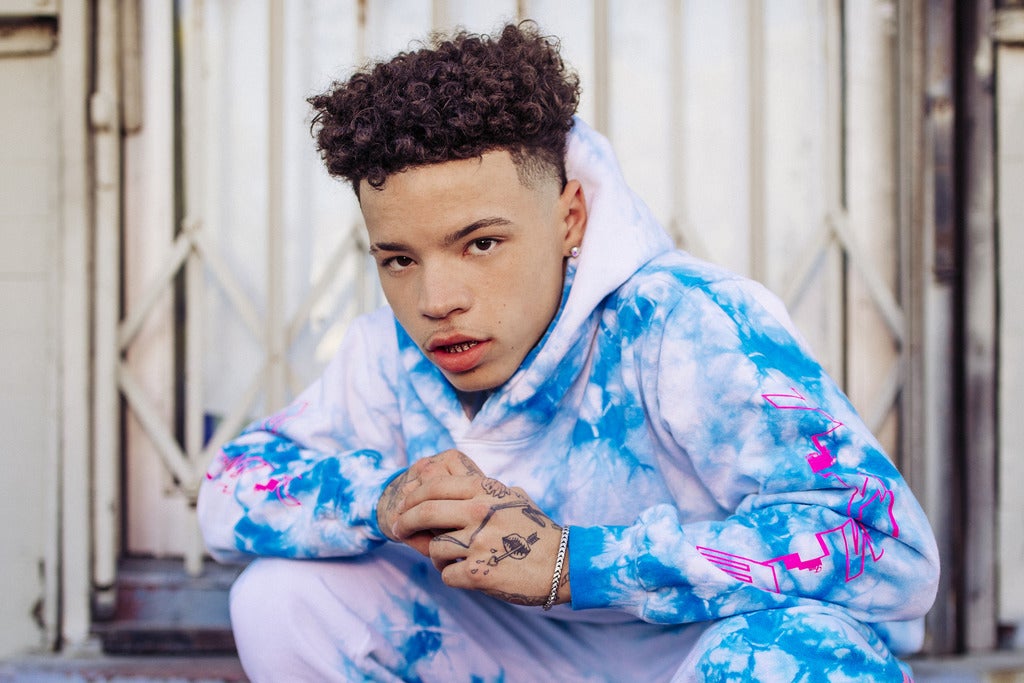 There is a whole new crew of fresh blood and young hip hop talent on the rise in the rap world. A stand out amongst this freshman class of artists is Lil Mosey, a Washington boy who chose to become a young man and a blossoming artist in Los Angeles, California. Though he has seen unprecedented fame at a very young age, Lil Mosey still holds a youthful charm and fun playfulness that emanates through his tracks. Read on to learn more about Lil Mosey, this sly, smooth newcomer who is bound to continue making waves on the scene.

Lil Mosey developed his stage moniker from the name he was given at birth: Lathan Moses Stanley Echols. He was born in Mountlake Terrace, Washington on January 25, 2002. He lived with his mother in Seattle on the north side of town. When he was in his early teens, he began his pursuit of hip hop music and a career as a rapper, beginning to create rap songs when he was in the eighth grade. His high school years started at Mountlake Terrace High School, but he later transferred in the tenth grade to Shorecrest High School. Lil Mosey would not graduate, though, as he dropped out of Shorecrest High School to move to Los Angeles in the interest of his recording career.

The Career of Lil Mosey

Lil Mosey’s first official song as a recording artist was uploaded to SoundCloud streaming in 2016. Entitled “So Bad,” the track quickly garnered popularity and got over fifty thousand streams. This track came out when Lil Mosey was just fourteen years old. Banking on his popularity and momentum, Lil Mosey decided to enter himself in the Coast 2 Coast Live Seattle All Ages Edition competition on November 13, 2016. He placed fourth place overall.

Commercially, the first properly released track for Lil Mosey was his debut single that came out in 2017, entitled “Pull Up.” The track was hugely popular on YouTube and garnered over 25 million views within the first year and a half of its release date, which took place in 2018. The second single, “Boof Pack,” came out on March 14, 2018 and also pulled a substantial social media following. Rolling on the success of the previous two singles, “Noticed” was released as Lil Mosey’s third commercial track, and within the first two weeks of the premiere of the video on YouTube (which features Lil Mosey with a group of his friends luxuriating and living the good life in a beach side apartment), it had just about ten million views.

Lil Mosey took party in an interview with XXL on August 9, 2018, during which he shared that he was in the midst of working on a studio album to follow up on his the mixtape that he dropped in 2017. Mosey stated that he planned for the album to be released in the fall. Subsequently, on October 15, 2018, Lil Mosey’s Instagram account featured a teaser post, once again referencing the upcoming album. The reveal of the album release date finally came on October 17, leading up to the album, which took place two days later on October 19, 2018.

Northsbest is the name of the  debut studio album that  Lil Mosey dropped that year. The album was released by Interscope Records as well as Mogul Vision Music. The album shared the name of Lil Mosey’s 2017 mixtape, as he had indicated in previous teasers. The album version of Northsbest included not only all three of the previously released singles, but it also contained eight other additional tracks, as well. The single other featured artist on the album is BlockBoy JB.

Overall, the album Northsbest garnered positive reviews from most critics, and it got a score of 4.3 out of 5 stars on average on the website HotNewHipHop.1

Of note are some sampled sounds from “Yo (Excuse Me Miss)” by Chris Brown that are used on the track “Greet Her.” Lil Mosey also released a clean version of the record, on which the track “Kamikaze” is labeled “Kamakaze.”

Making use of the young artist’s YouTube popularity, a video trailer for his second album was uploaded and shared on October 29, 2019, leading to the actual release a week later, Lil Mosey’s second studio album release came about on November 8, 2019.

Released through Interscope Records and Mogul Vision music, the rapper’s follow up to his debut was brashly entitled Certified Hitmaker, and its quick leap in numbers suggested this was no misnomer. Certified Hitmaker hit the charts on the Billboard 200 at the number 12 spot on the Billboard 200 and sold over twenty thousand copies within the first week of its availability.

The album got a fresh re-release and was issued for a second time on February 7, 2020. The reissue of Certified Hitmaker contained the single track “Blueberry Faygo,” a huge hit for Mosey with a fun, bright music video directed by Cole Bennett on the Lyrical Lemonade YouTube channel. The newly included “Blueberry Faygo” track became Mosey’s highest charting song on the Billboard Hot 100.

It went on to peak out at number eight on the chart, and the single also performed well on the international market. Other artists who are featured on the album include Gunna, Trippie Redd, Chris Brown, and AJ Tracey, with Lunay and Lil Baby featured on the deluxe cut of the album. The album’s deluxe version, which was marketed under the title Certified Hitmaker: Ava Leak, came out on August 14, 2020. It included not only additional artist features but also added three new tracks to the list overall.

While Lil Mosey has many influences and favorite artists, he specifically points to Meek Mill as being one of the most important artists to his musical career. In fact, one of Mosey’s favorite songs is Mill’s “Dreams and Nightmares.”

He has made note of the support he received from the late rapper Kari Cash, how he misses him being around, and the loss to the industry. This is also the reason why he is so connected to Bape. Of Kari Cash, Lil Mosey says,  “He was Bape from head to toe, so I’ll always be Bape from head to toe. And some Gucci, of course. He liked Gucci, too.”

Do not refer to Lil Mosey as a “mumble rapper;” in no uncertain terms, he is not down with that classification. He only thinks of his style of rap as his own authentic voice without any forced style on top of it.

He once stated as much in an interview, saying, “I wouldn’t consider myself a mumble rapper, because I don’t know what that is. But when I talk, I mumble. So it’s in my music because that’s how I talk. I’m not going for that sound. I tried to make myself be able to talk better than that and I couldn’t. That’s how I make music. It’s fire like that, though, so I don’t gotta change nothing.”

Mosey loves all sorts of musical instruments. Though he would not consider himself a professional pianist, he does admit that whenever he sees a piano, he cannot help but play on it.

His first real stage time took place at a talent showcase when he was quite young. Though it made him very nervous at the time, Mosey noted that with each performance getting on the stage gets easier and more comfortable for him.

For one so young, Lil Mosey has seen some real action on the stage. His first real, live onstage performance took place during a Seattle concert by Lil Xan, who brought Mosey up to do the show with him. He had a 2018 appearance at the Rolling Loud concert. Some of Lil Mosey’s other featured performances include Lil Tjay, Polo G, Smokepurpp, Bandkidjay, Suave, and Smooky MarGielaa. Additionally, he was the opening act in 2018 for Juice Wrld and YBN Cordae on the WRLD Domination Tour. His Certified Hitmaker Tour took him all over Europe, Canada, and the United States.

When asked about getting signed to the Interscope label, Lil Mosey stated, “I had a lot of meetings with labels back then. I chose Interscope because I like the people there and the environment that was there. And the fact that not a lot of people get signed to Interscope.”

Lil Mosey is a big fan of the beats made by his producer, Royce David, saying that he really understands the style that he is going for. Additionally, Royce David serves as Engineer for Lil Mosey, and so he knows the ins and outs of his sound and always finds the right amount of auto tune and other sound devices (which Mosey does not like to use a ton of). Lil Mosey has stated that he would like to get into the producing game himself someday when he has time away from performing.

Be on the lookout for Icee cups in Lil Mosey’s videos. According to him, it is a signature that he wants to be included in his visuals, signifying the frozen nature of being out there hustling in the hip hop game.

It is clear that this bright young star has a big future ahead of him, and there is no stopping in sight. Lil Mosey is a member of a brand new era of hip hop, and he has definitely earned his place of honor in the family of youthful rap royalty.