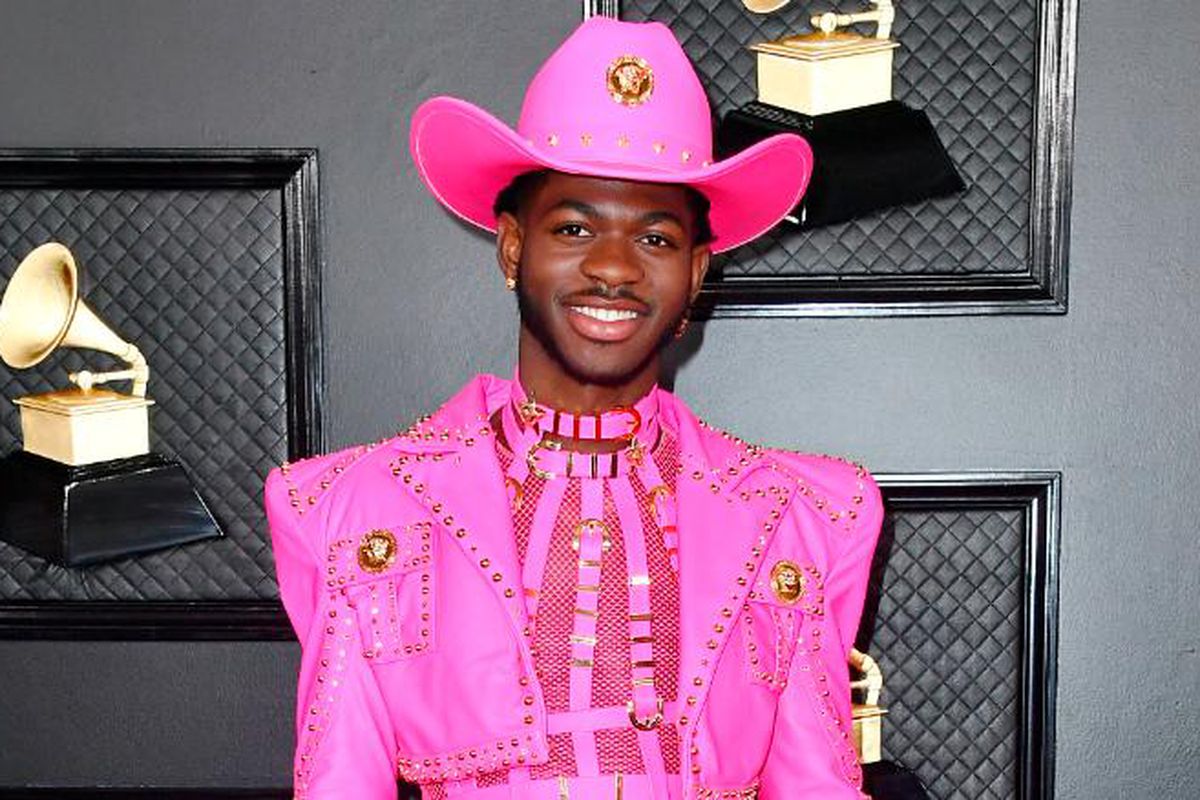 It still feels like it wasn’t too long ago that the name Lil Nas X meant nothing to us. If anything, we might have mistaken it for rapper Nas having a son that never announced who rocks a cowboy hat. But now thatLil Nas X is a full-fledged mainstream artist, how did he arrive at that name in the first place:

“It’s been my internet alias for a minute… The X wasn’t included at first. It was just Lil Nas. It was Lil Nas because when I first started rapping, I wasn’t as serious, so it was like, ‘Okay, every rapper’s name is starting with Lil lately.’ So, I kind of got stuck with it. I added the X later on after I was more serious.”

How did Montero Lamar Hill, who was born in Lithia Springs, Georgia, a small city outside of Atlanta, on April 9, 1999, wind up riding into the entertainment industry so quickly?

Before he became the Lil Nas X that we know today, he kept himself busy spending a bulk of his teenage years by alone and tuning into to the Internet, particularly Twitter, creating funny digital memes that displayed his hit and knowledge about popular culture, stating:

“I was doing Facebook comedy videos, then I moved over to Instagram, and then I hopped on Twitter … where I really was a master. That was the first place where I could go viral.”

At the time, it was hard for him to deal with being gay, even praying that it was just a temporary phase in his life. At about the age of 16 r 17 he finally accepted it.

Musically speaking, he started playing the trumpet during the fourth grade and was first-chair in the school band during his junior high years. But the social pressure of having to appear to look ‘cool’ made him back away from those passions. After graduating from Lithia Springs High School in 2017, he started out at the University of West Georgia. But this college transition for Lil Nas X would only last for one year before dropping out to take music seriously as a full-time driving force towards his future. At this point, he was living with his sister and supported himself with jobs at Zaxby’s restaurants and the Six Flags amusement park.

The Rise of “Old Town Road”

When Lil Nas X dropped out of college to pursue music in 2018, he was discouraged by his parents, so he moved in with his sister, promoting his music online, and only averaging three hours of sleep each night. He came across the beat for “Old Town Road” in October 2018, writing to it feverishly after his sister had let him know that he was going to have to move out soon. His family frustrations inspired the song’s chorus: “can’t nobody tell me nothing.”

Just a month after writing “Old Town Road,” Lil Nas X chose to alter the meaning of the song so that the “old town road” would be a symbol of success instead of stress. Lil Nas X recorded “Old Town Road” on December 2, 2018, at the CinCoYo Recording Studio in Atlanta and released it the very next day. Dutch record producer YoungKio is responsible for making the beat, who had never even met Lil Nas X at this point because it was bought by LNX from an online store for selling beats.

With its sample of Nine Inch Nails’ track “34 Ghosts IV” and just a $30 price tag, this beat didn’t even hit YoungKio ‘s awareness until he saw it in an Instagram meme in December 2018. There was nothing sketchy about the way that this unfolded because buyers of beats were anonymous, Trent Reznor from the Nine Inch Nails received a call from Lil Nas X’s manager about providing clearance for the sample, which he granted, labeling the song undeniably hooky.” This took place shortly after the song started showing signs of growing strong with listeners.

With complete confidence, on December 4, 2018, a day after the original version of “Old Town Road” was released, Lil Nas X tweeted out that he wanted Billy Ray Cyrus on the song, being aware of the older country singer from Bill Ray’s role on Disney Channel television series Hannah Montana. Before this materialized, country singer Jake Owen was originally asked to co-write and record the first remix of “Old Town Road.” Columbia Records executive Ron Perry actually stepped in and reached out to Cyrus’ wife, Tish Cyrus, expressing how much he would love for Billy Ray Cyrus to take the time to hear “Old Town Road.”

Billy Ray Cyrus first heard the song while having a cup of coffee on March 16, 2019, when Tish played it to him. What was the verdict, as if you didn’t already know? Cyrus’ reaction was feeling the original song from the very first time that he heard it, and he also mentioned that he related to the song as well, connecting the “old town road” idea in the song to the Old Town Bridge in Argillite, Kentucky that Billy Ray Cyrus used to play on as a kid. In response to Billboard taking “Old Town Road” off of the Hot Country Songs chart, Billy Ray Cyrus took to his Twitter account to show his support for Lil Nas X and stated that the removal of the song put him in the ranks of great outlaws.

But it wouldn’t actually be many months after the December 2018 release of the original version of “Old Town” Road,” April 2019 to be exact, before Billy Ray Cyrus actually joined a remix of “Old Town Road” and the song began its record-breaking run at No. 1, jumpstarting the music career of Lil Nas X like a car revived with jumper cables.

You could make the argument that “Old Town Road” was released at just the right time, during the popularity of the “Yeehaw Agenda” meme movement, a moment in time when people were going online appropriating cowboy fashion and culture online.

Lil Nas X began creating memes, putting all the years of practice in that department that he had already perfected to use to promote “Old Town Road” before it was picked up by TikTok users.

The song gained traction towards the end of December 2018, quickly becoming a focal point of the “Yeehaw Challenge” meme trend on the TikTok app, where users create short videos set to a song. This challenge is credited with launching the song to debut at number 83 on the Billboard Hot 100, the same chart where the song would eventually move up and peak at number one.

As a matter of fact, “Old Town Road” got so popular so quickly that radio stations had to download the audio from YouTube. With that one song, on March 22, 2019, Lil Nas X was able to sign a record deal to Columbia Records, which now distributes the single.

With a song this hot, you know that a remix was going to be on the way. That very first official remix of “Old Town Road” featured an American country singer legend – Billy Ray Cyrus and was released on April 5, 2019, by Columbia Records. This success-savvy remix made so much sense as it blends two different generations, two men of two different races, two different sexual orientations, and it merged two different genres of music – hip hop and country.

The remix got recorded in support of “Old Town Road” being recognized as a country song, complete with a limited edition 7-inch vinyl single that was available for purchase on May 1, 2019, featuring the remix on the A-side and the original on the B-side, with the remix also eventually getting included on Lil Nas X’s debut EP, 7. On May 17, 2019, the music video for the remix was rolled out. With a diverse array of cameo appearances from Chris Rock, Diplo, Vince Staples, Jozzy, Young Kio, Haha Davis, and Rico Nasty,

The mainstream onslaught of “Old Town Road” was rolled out in epic fashion, putting it front and center in as many aspects of pop culture as possible. Lil Nas X danced and moved to “Old Town Road” with the cheerleaders of his hometown NBA basketball team, the Atlanta Hawks at State Farm Arena on March 29, 2019, Then a month later on April 29, 2019, Lil Nas X and Billy Ray Cyrus performed the live debut of “Old Town Road” as an appearance during Diplo’s set at the Stagecoach Festival.

Then as if the song could explode any louder, on June 24, 2019, Lil Nas X and Billy Ray Cyrus performed the song together again on a saloon-themed stage for the 2019 BET Awards and the following year Lil Nas X was up on stage, performing “Old Town Road” during the 62nd Annual Grammy Awards with a bevy of big names like Diplo, BTS, Mason Ramsey, and Billy Ray Cyrus. To make the time on stage even more memorable, for those that thought rapper Nas might have hated Lil Nas X for borrowing his name a little bit, Lil Nas X finished his performance by performing “Rodeo” along with Nas himself.

Now that “Old Town Road” was the biggest song that Li Nas X had in his holster to bang audiences with, it was certainly time to put up or shut up with some new music before the wheels on the “Old Town Road” wagon completely rolled off. He also put out “Panini”, and “Rodeo,” but that wouldn’t hold listeners and fans over for long.

This necessary newness came in the form of not an album but an EP that was simply titled 7, preceded by the Billboard Hot 100 number one single, “Old Town Road” the original version, “Old Town Road” the remixed version with Billy Ray Cyrus, “Panini,” and “Rodeo.” This first offering featured guest appearances from Billy Ray Cyrus, Travis Barker, as well as Cardi B. Lil Nas X’s 7 received six Grammy Award nominations, including a nomination for Album of the Year.

While recording 7, Lil Nas X deliberately avoided producing this whole project with nothing but country rap songs in fear that it could be detrimental to his career by pigeonholing him because of the massive success that he already had with “Old Town Road.” Be that as it may, Lil Nas X still included one other country song, “Rodeo.” Multiple trap beats were submitted to the singer for consideration, which he rejected as he did not want to be considered a “trap artist.” He had already claimed that even though he was from Atlanta, he didn’t feel he fit in with the Atlanta style of trap music that his city popularized.

Lil Nas X announced the 7 EP on May 18, 2019, on all social media platforms, with the 8-song project eventually coming out June 21, 2019, on Columbia Records. This promotional teaser included a tidbit of a song that Spin’s Rob Arcand described as “singing a trap-pop hook through a slurred AutoTune drawl.” Lil Nas X had stated that the EP would include a collaboration with “one of [his] favorite artists ever.”

“Old Country Road” was laid out with gold for Lil Nas X, in the form of a whole lot of awards:

It seemed like anyone, and everyone, from YouTubers to A-List celebrities wanted to get close to Lil Nas X and take a stroll down the “Old Town Road” of riches in 2019. The fact that Lil Nas X hasn’t released a full-length album or EP collection of songs since might seem a little puzzling. What will be next on the wild frontier of the music industry for Lil Nas X?