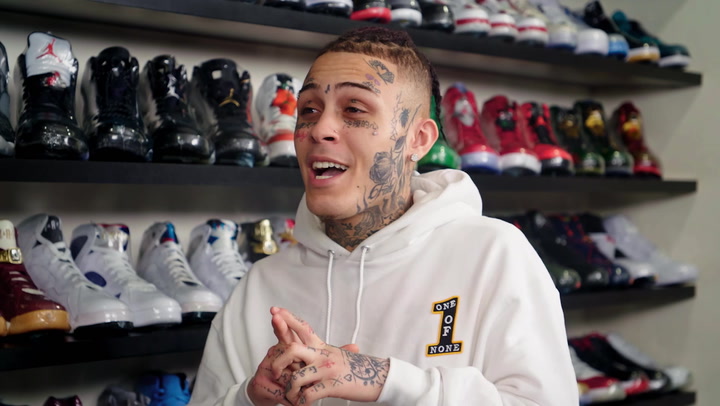 Lil Skies wasn’t from rap royalty. He’s not the son of a rapper like Jaden Smith, and he doesn’t get street cred from having an association with the Black Disciples like Chief Keef and his crew. But what he does have is a drive for music that extends back to his early years, a father who encouraged him to push as far as he could, and access to revolutionary new platforms like SoundCloud.

His tragedy may have not been born through the streets, but that doesn’t mean that Lil Skies’ music is authentic, or that it doesn’t speak to grief and loss. He may be a young talent, but he’s demonstrated himself to be a well-versed student of music, and he’s shown an interest in evolving into something bigger with each passing year.

Lil Skies’ first audience is still the most important to him, and his first audience was his father. He was born Kimetrius Christopher Foose on August 4. 1998 in Chambersburg, Pennsylvania. His father is Michael Burton Junior, a former rapper himself who went by the names Dark Skies and then BurntMan. The former was an inspiration for Kimetrius’ own sobriquet, and his father was arguably the most important unifying force in Kimetrius’ passion for making music.

Kimetrius would be exposed to music at a very early age. By his own reckoning, he was brought into the studio to record for the first time at age 4. He’s spoken at length about how music always seemed to be a part of his life and brought him a sense of satisfaction that he could never quite explain.

“My dad used to do music and shit, so basically growing up, I used to just watch him. That’s all I used to just see. When I would see my dad, that’s what our relationship was. I ain’t see my pops like that, but when I did, we would be at the studio or some shit like that.” But it would take a dramatic set of circumstances for Kimetrius to fully devote himself to the music business.

While he was in third grade, Lil Skies and his family moved to Waynesboro, Pennsylvania. Tragedy followed shortly thereafter. At age 11, Kimetrius’ dad was injured in a chemical explosion at the Rust-Oleum plant he worked at. Kimetrius has spoken in vulnerable terms about hearing about his mother coming to his school in the wake of the accident and how he stepped away from his friends to just cry.

The accident was serious, and his father would suffer second and third-degree burns over a significant portion of his body. That said, he’d manage to pull through. While Kimetrius’ father recovered from the accident, Kimetrius was left to live with his relatives. This could be seen as the genuine beginning of Lil Skies’ career. With both father and son experiencing the fragility of life personally, they were determined to start collaborating together musically.

Lil Skies and his dad would continue to collaborate throughout high school, and while these wouldn’t become hitmakers, they served as a critical bonding and recovery tool and a way for father and son to get closer. Lil Skies once had ambitions to live in the wild like Bear Grylls, but after the accident, he set his sights on a music career. Their first album would be entitled Birth of Skies, Volume 1, and it would be followed up by a second release a year later. Father-Son Talk would be deeply personal and focus on both Kimetrius and Michael working their way through the recovery process for the accident.

Kimetrius graduated from high school in 2016. After briefly attending college at the Shippensburg University of Pennsylvania, he dropped out to focus on his music career. It would turn out to be a smart decision. Within about a year, the rapper would have a dramatic stage to reach out to prospective fans and carve out a name for himself in the current music game.

Within a few months of graduating high school, Kimetrius would already see some early success. Impressed by the experience he developed while he was still in school and his diligent approach to the game, Fetty Wap chose him as an opening act for a performance at Shippensburg University.

It was an encouraging endorsement, but plenty of local acts have opened at a college show only to never see their popularity really develop. That wasn’t the case with Lil Skies. By January of 2017, he’d churned out his first mixtape. This early sound would come to establish his identity moving forward – a lyrical approach to hip-hop that emphasized mood over sick rhymes or clever lyrical sophistication.

Those catchy beats would begin to draw the attention of both prospective fans and industry figures. While Alone never reached wide release, it demonstrated the promise of Lil Skies’ talents and continues to be a hidden gem of formative late 2010s trap and cloud rap.

Hooking Up With a Label

In an interview with Billboard Magazine, Lil Skies talked at length about his iconic face tattoos. According to Lil Skies, getting tattooed was an act of commitment – both a daily reminder in the mirror of who he is and who he wanted to be and a practical decision to never pursue a regular 9 to 5 job. According to Lil Skies logic, it’s this or nothing. And while it may have been a gamble, it paid off.

The quality of Alone, along with smart publicity on SoundCloud, drew the attention of executives at Atlantic Records. By this point, he’d released a handful of other singles, but it was “Red Roses” performed with Landon Cube that would initially grab the attention of studio figures and capture the imagination of fans. In establishing a contract, Skies’ experience growing up with a musician father really paid off. He’d already established his own label – All We Got – and used that as leverage for an expansive deal with Atlantic.

With a record deal under his belt, he got to work on his first mixtape with serious distribution. Life of a Dark Rose was released on January 10, 2018. It would launch at 23 on the Billboard Top 100 and eventually rise to 10 – not bad for a freshman musician who was just a year out of high school. The initial hit “Red Roses” would anchor the album, and it would generally get praise from critics.

With a playtime of a lean 40 minutes, Life of a Dark Rose would be regarded as a pleasant and dreamy album that perhaps didn’t do enough to distinguish itself from other cloud rap of the era. Within two years, the album would be certified gold by the RIAA. The mixtape itself was light on guest performers, forcing the young rapper to carry the success of the album on the skills he developed from an early age and his own sense of confidence.

Tracks Listed on Life of a Dark Rose

A Round of Tours

With his freshman album under his belt and a career that was already under his belt, the next obvious move was to go on tour. Fortunately, he had the confidence of a big record label at his back. He toured with Lil Uzi Vert in 2017 as an appetizer for launching his own tour in 2018. Unfortunately, it would be a short-lived engagement. Despite wanting to push forward with the “Life of a Dark Rose” tour, a bout of pneumonia forced Lil Skies to cancel the tour early on.

That wouldn’t stop Lil Skies from getting some work done in the studio. The music video for “Lust” came out on May 4, 2018 and drew some added attention to the single. He’d also release a collaboration with Yung Ping named “I Know You” on May 31. It would eventually be certified gold and peak at number 79 on the Billboard Hot 100.

Hooking Up With Cole Bennett

It was clear from the jump that Lil Skies had an ear for catchy melodies, and everything about him seemed custom made for the house style of what a SoundCloud rapper should be: a charming and personality-rich young man with a musical heritage that traced back to his childhood and a prominent set of face tattoos.

But even in the age of social media, solid marketing is important for a rapper’s success. Cole Bennett, a videographer who got his start shooting videos for the Chicago rap scene while he was still in high school, had since developed a reputation as a wunderkind, and his Lyrical Lemonade brand had become one of the most prominent tastemakers in the world of hip-hop.

Lil Skies was a good fit for Lyrical Lemonade’s house style, and his tone fits solidly within Lyrical Lemonade’s lane. Bennett has expressed a talent for taking young artists and helping their sense of personality shine in music videos, and he applied that skill to Lil Skies as well.

Recognizing the kid’s raw charisma, he let Dark Skies’ identity come front and center, and the visual iconography (and promotion on the Lyrical Lemonade site) helped him stand apart from the pack in a market that was overflowing with up-and-coming wannabe teenage SoundCloud rappers. Cole Bennett even went to his own high school to capture that youthful energy and shoot Lil Skies’ video for “Nowadays”.

By 2019, Lil Skies wasn’t even old enough to drink legally, but he had reached the same level of success that many musicians wait years for. He already had a record deal with Atlantic, a series of successful mixtapes, and both a collaborative and solo tour under his belt. He was also awaiting the birth of his first child by longtime girlfriend Jacey Fugate.

The only thing that was left was a studio album. It would drop just a few months before Kimetrius’ son Kimetrius Jr. was born. The album Shelby was released on March 1, 2019. A video for lead single “I” would be released the same day. Shelby would release generally solid reviews – with some critics rating it as more of the same thing we’ve heard from other SoundCloud rappers but still commenting on the quality of polish on the freshman effort.

The success of Lil Skies happened practically overnight, and to many, he’s come to typify the polished realization of the latest trap sound. He isn’t a rapper who relies on clever wordplay, nor does he lean as hard into the emo influences as contemporaries like Juice WRLD. But Lil Skies’ career is just beginning.

This is a rapper who’s devoted to music since he was a kid, but he doesn’t have the years of experience that more seasoned musicians can rely on or the street experience that adds credence to the Chicago rappers in the drill scene. But that’s to be expected. Lil Skies’ career is just beginning, but he’s already begun collaborating with Gucci Mane and has spoken of him as he might discuss a mentor.

While his biography might seem a little slim for now, it’s important to recognize that Lil Skies is still barely 20. He’s a man anchored by his family and devoted to music above the drugs, flash, and glamor of the lifestyle. We’ll see whether he becomes a one-hit-wonder or a true star, but the skills he’s demonstrated so far show serious promise.