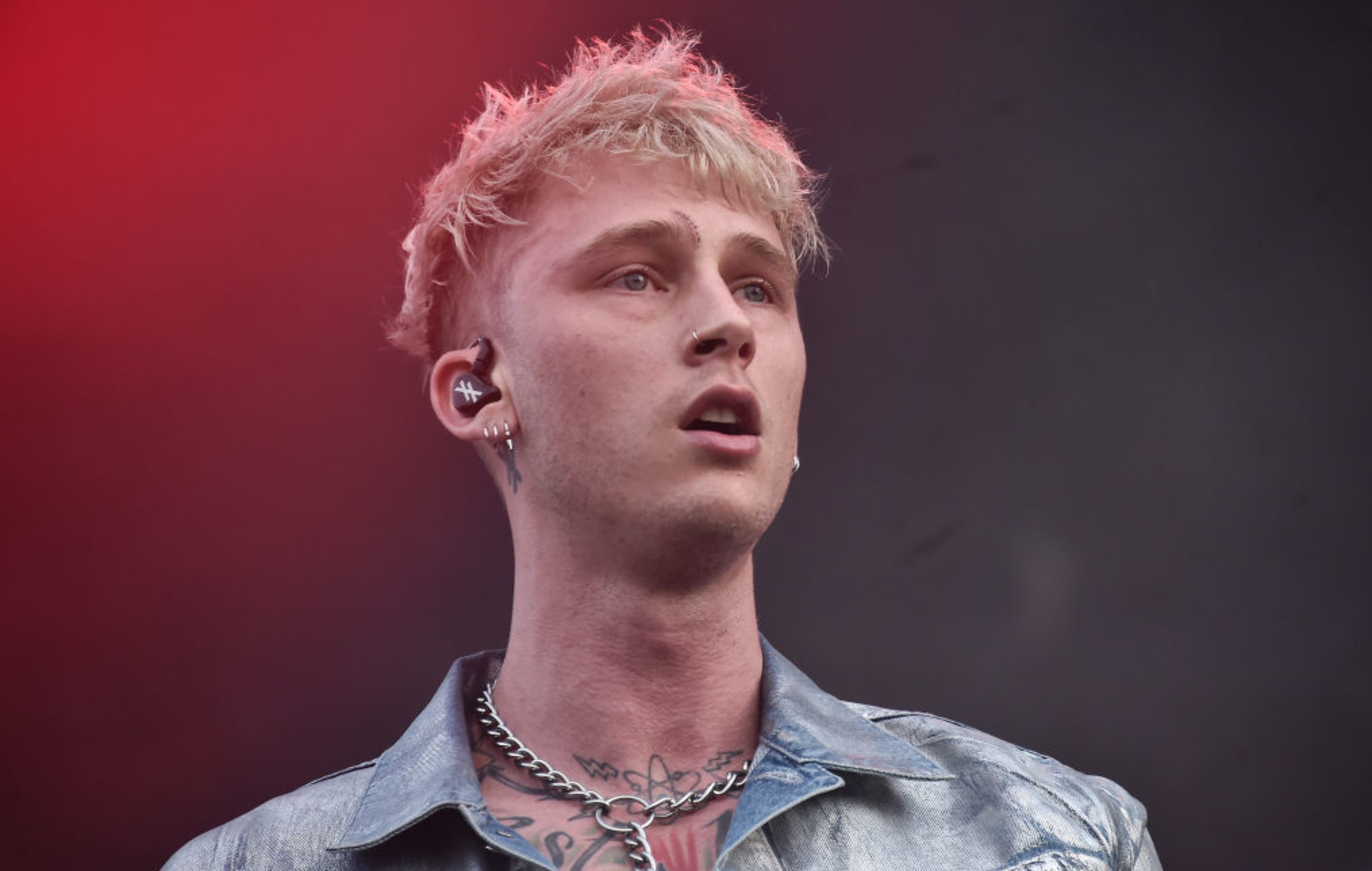 A rapper, actor, and soon-to-be rock singer, Machine Gun Kelly has filled many roles during his decade-and-a-half in the entertainment business. He has evolved from a mile-a-minute rapper that often saw comparisons to Eminem to a traditional pop punk singer with some minor rap leanings. This is an attempt to sum up his career.

Born in Houston, Texas on April 22, 1990, Richard Colson Baker had an eventful childhood, as while he grew up in Cleveland, his parents were missionaries. They would often live in other countries, Egypt and Germany being among them. Apparently, his first few years in Egypt led him to have a multilingual background; ‘“I spoke Arabic before I spoke English.”

He discovered rap sometime after his mother left his father and him behind, taking a particular liking to DMX’s “We Right Here.”

In 2005, his father briefly moved the two of them to Kuwait before they returned to Cleveland.

He received the moniker “Machine Gun Kelly,” a name that belonged to a notorious Prohibition Era gangster, from his first manager, a Cleveland-area t-shirt shop owner. His manager named him Machine Gun Kelly due to his rapid delivery of raps. Collaboration with this manager ultimately led to MGK’s first mixtape, Stamp of Approval.

While he would celebrate numerous good times, including becoming the first rapper to win at Harlem’s Apollo Theatre and featuring on MTV2’s Sucker Free Freestyle, MGK would face much adversity before success found him. He was forced to work odd jobs at places like Chipotle, his father evicted him from their home, and he had a daughter, Casie, with a woman named Emma Cannon, who appears to shy away from the public limelight.

He still pushed forward, though, releasing his next mixtape in February 2010, 100 Words and Running, which saw him debut “Lace Up,” his catchphrase.

He began his national push when his song “Alice in Wonderland” debuted on iTunes in May 2010. The song gained some traction and saw a Youtube video which eventually earned several million views. In November of the same year, he released yet another mixtape, Lace Up, which saw some Cleveland-area success with the song “Cleveland.”

By March 2011, his reputation had grown enough so that the festival South by Southwest gave him a slot. Bad Boy owner Sean Combs met him at the festival and was so impressed by MGK’s performance that he gave MGK a bottle of champagne; soon, MGK was signed to Bad Boy. The partnership would soon result in the song “Wild Boy,” which featured Waka Flocka Flame and saw MGK hit the Billboard Hot 100 for the first time, peaking at #98.

On March 20, 2012, he released his first EP, Half Naked and Almost Famous. An appropriate title, this would see his first entry on the Billboard 200, debuting at #46.

Somewhat ironically, considering the name of the EP, MGK signed a deal with Young and Reckless Clothing a few months prior, in 2011.

His next big push came with the song “Invincible,” which was released on iTunes on December 16, 2011. He performed the song with cowriter Ester Dean at Wrestlemania XXVIII, partially as a promotion of the event itself (as the song was Wrestlemania’s theme song for that year), and partially in support of wrestler and rapper John Cena in his bout against the Rock. He was roundly booed for his performance, though this is likely due to the virulent anti-John Cena feeling of the crowd that night as opposed to hatred of MGK’s performance or song.

Cool reception aside, MGK would continue to appear sporadically at events run by the WWE, including the following year’s Wrestlemania, Fastlane 2016, and Summerslam 2017. He also appeared at a taping of WWE’s flagship show, Raw, where he hosted an episode in his hometown of Cleveland; during this episode, MGK took his first wrestling “bump” (wrestling slang for a fall that looks painful, but is somewhat controlled) when wrestler Kevin Owens powerbombed him through a stage on which he had just performed.

MGK’s star continued to rise, as he was named the Hottest Breakthrough MC of 2011 by MTV. Later, in 2012, XXL would name him to their Top Ten Freshmen for the year, alongside French Montana, Macklemore, Future, and Iggy Azalea.

He would make public mention of his love for Eminem at this time when listing off acts on the album: “I got legends on there. DMX. Me, Tech N9ne, and Twista on one track, the song everybody wanted to hear. Fuckin’ Eminem, I’m just playing. That would have been certified platinum…”

The album debuted at #4 and has been certified gold by the RIAA, though not platinum as of yet.

While the album did not receive the same rave reviews that his mixtapes received, critics did eventually get behind him. He chose to follow this up with a mixtape, Black Flag, although he claimed, “Black Flag is not a mixtape, it’s an album we’re giving away for free.”

The mixtape released gradually over several days, with different components, such as the album booklet, tracks, and eventually the full album on June 26, 2013. The album continued his flirtation with rock that he displayed on the previous album when he did a relatively straightforward cover of Rise Against’s ballad “Swing Life Away” alongside Kellin Quinn of rock band Sleeping with Sirens. The album also saw collaborations with Meek Mill, Pusha T, and French Montana.

While he had released a steady torrent of new music since the beginning of the decade, MGK didn’t release much music in 2014. Instead, he began his acting career, playing as an arrogant MC named Kid Culprit in the film Beyond the Lights. While he didn’t have a large part, he did receive some praise for his supporting role.

Other film projects featuring MGK include Punk’s Dead (a sequel to the cult film SLC Punk), The Dirt (a dramatization of the career of 80’s rock band Mötley Crüe), and Bird Box (the Netflix psychological thriller which saw some memetic fame in 2018)

As filming was going on for the film, MGK was busy preparing his next album. Murmurs began shortly after Black Flag released, but for most of 2014, MGK didn’t release any new music.

MGK began promoting his second full album, General Admission, in early 2015 with the release of the first single, “Till I Die,” on January 5. The song would later see a remix featuring Bone Thugs-N-Harmony, French Montana, Yo Gotti, and Real Kid. While MGK expressed some frustration at how long the album had been delayed by Bad Boy (even releasing a mixtape prior to release called Fuck It that featured songs that were not included on the album), the album finally released on October 16, 2015.

General Admission featured fewer collaborators, with the rhythm guitarist/vocalist for Halestorm and Kid Rock among them; MGK took center stage, addressing darker themes than previously; critics noted the album as being more somber, especially near the ending tracks, than much of his previous work. The album became his first top 10 album, peaking at #4 on the Billboard 200, as well as topping the R&B/Hip Hop Albums chart. Like its predecessor, General Admission eventually went Gold.

MGK Enters the Top 10, and Beefs with Eminem

On October 14, 2016, MGK released the single “Bad Things” featuring former Fifth Harmony singer Camila Cabello singing the hook, an extrapolation of the Fastball song “Out of my Head.” For the second time in his career, MGK entered the Billboard Hot 100; for the first time, he earned a top 40 hit, peaking at #4. This was also the first top-5 hit for Camila Cabello.

The single would later be featured on MGK’s next album, Bloom. While the album would feature another minor chart hit with “At My Best” (a song that featured actress/singer Hailee Steinfeld, peaking at #60 on the Billboard Hot 100), Bloom ultimately peaked at 8 on the album charts and 3 on the R&B/Hip-Hop Albums charts, lower than the peaks for his previous album. Nonetheless, this album also went gold.

Around this time, a beef started between MGK and fellow white rapper Eminem. In 2012, MGK had tweeted an inappropriate tweet about Eminem’s daughter, Hailie, saying, “I have to say, she is hot as fuck.” MGK would ultimately admit his tweet was in poor taste after realizing she was 16 at the time and delete it at the behest of Eminem’s management, but Eminem still took offense to the tweet and chose to attack MGK directly on his surprise album Kamikaze with the song “Not Alike,” telling MGK that he didn’t think much of how MGK attacked him:

“If you wanna come at me with a sub, Machine Gun

And I’m talkin’ to you

But you already know who the fuck you are, Kelly

MGK, who had always respected Eminem prior to this, even saying “Em is king” in the same tweet where he talked about Hailie, released a response track, “Rap Devil,” where he accused Eminem of trying to take glory from younger, up-and-coming acts such as himself;

“Shout out to every rapper that’s up under me

Know that I’ll never do you like this fuckery.”

Eminem responded to MGK’s diss track with a second diss track of his own, “Killshot:”

“Your reply got the crowd yelling, “Woo!”

But I’m 45 and I’m still outselling you

“Killshot,” featured on Eminem’s tenth studio album Kamikaze, features another diss on MGK in the song “The Ringer,” in a verse dealing with his many perceived imitators:

I should aim at everybody in the game, pick a name

I’m fed up with bein’ humble.”

Binge, MGK’s second EP, featured the aforementioned “Rap Devil,” as well as 8 other songs. However, unlike his previous efforts, critics lambasted the album, accusing MGK of milking his feud with Eminem for album sales rather than progressing as an artist.

After receiving multiple criticisms from his former idol Eminem and poor critical and commercial performance for his most recent LP, MGK had a moment where he decided to start from scratch, scrapping everything he had created for his fourth album (including a duet with pop musician Lana Del Rey). Instead of performing more of the mumble rap that had permeated Binge, MGK focused on a rap rock sound and released Hotel Diablo on July 5, 2019.

While critical reception was lukewarm at best, the commercial performance for this album was much better than Binge, peaking at #5 on the Billboard 200 charts.

The album notably featured Travis Barker, the drummer for Blink-182, on the final track, “I Think I’m Okay;” the song had pop punk leanings, and ultimately had its greatest success on rock radio. The song peaked at #3 on the Hot Rock and Alternative Songs chart and was #8 on the year-end Hot Rock Songs Chart for 2019.

Travis Barker would go on to produce MGK’s next album, Tickets to my Downfall.

A complete departure from MGK’s previous work, Tickets to my Downfall features no rapping but is instead a punk pop album, similar to the pop punk bands that MGK had loved growing up.

Because the album has just released as of this writing (September 25, 2020 being the release date), commercial performance is not yet available, although one single from the album, “My Ex’s Best Friend,” featuring rapper Blackbear, did peak at 68 on the Billboard Hot 100, a relatively strong showing for an MGK single.