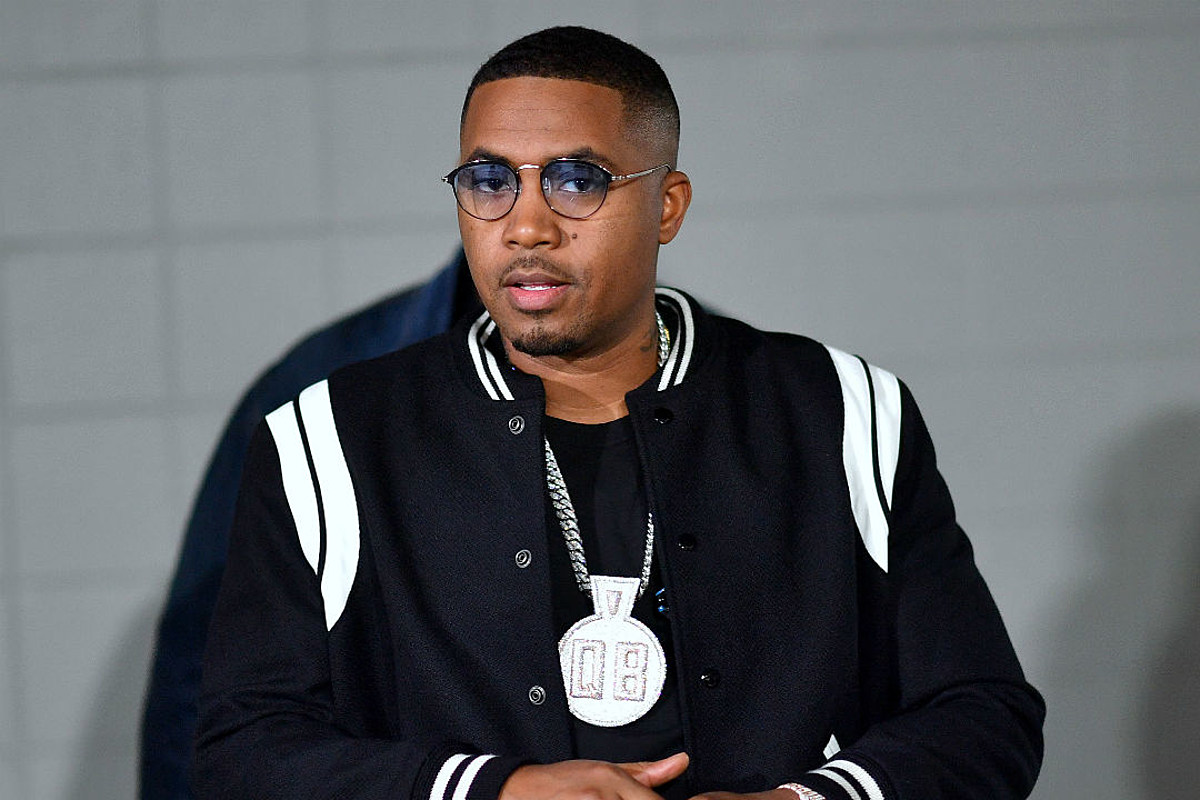 Nasir, a strong Arabic name that means “helper” or “one who gives victory.” When the veteran rapper with the still boyish face was born with the name Nasir Jones on September 14, 1973, his parents Olu Dara, a jazz and blues player and mother Fannie Ann, a U.S. Postal Service worker, gave birth to him in Brooklyn, New York (relocating later to Queens, New York), they could have along imagines how startling a dream Nas would realize in the world of hip hop culture, and it’s global expansion all over the planet.

How did this young man Nasir, whose father wasn’t around that often to raise him and his younger brother Jabari, a young man who never even attended high school, raise himself up out of the flames of economic hardship and be praised as one of the most complex and endearing poets that the hip hop genre has ever produced? Let’s take a walk back in time to discover the treasure that Nas has been leaving for the world to discover through his intricate words.

Nas came up in the chaos of Queensbridge Houses in the Long Island City, Queens section of New York City. This wasn’t just another low-income housing development that Nas survived, Queensbridge is a 3,142-unit complex that houses over 6900 people, and is the largest public housing development, nor just in the United States, in the entire Western Hemisphere. In this enormous fortress of families and financial struggle, hip hop was all-around ‘The Bridge’ just like the concrete barriers that operate like a city within a city.

Nas isn’t the only hip hop artist to come from Queensbridge. The 1980s’ super-producer in rap, Marley Marl, grew up there, as did many rappers he constructed beats for like MC Shan, Roxanne Shante, Tragedy Khadafi, Craig G, influential artists like Mobb Deep, Cormega, Capone from Capone-N-Noreaga, Nature, and even several NBA players like Metta World Peace, Vern Fleming, Sean Green, and Andy Walker.

When the bug bit Nasir to rap, his names for the stage went from “Kid Wave,” “Nasty Nas,” to just straight up “Nas,” the shortened form of his real name Nasir, speaking of when Nas was Nasty Nas, he blew away people’s imaginations in the explosion that he detonated on a song from the 1991 song “Live at the Barbecue” by Main Source. The lead rapper and producer in the group, Large Professor, was so taken by the young rapper from his same New York City location of Queens that he went out of his way to keep this kid getting recognized.

Large Professor would even produce some songs that would be key elements of Nas’ debut album, the ahead of its time Illmatic that heated up ears in the spring of 1994.

With just nine full songs, a tight, confident concoction like when Prince did the same on Purple Rain when Nas walked you through the dark corridors of dangerous project building hallways and through the street corners where your life can disappear just as quickly as it entered the earth, you don’t just believe Nas, she sees exactly what he is saying in vivid detail right in front of your face.

This is high definition rapping, like the song “N. Y. State of Mind” produced by DJ Premier where Nas spits:

“I got so many rhymes; I don’t think I’m too sane

Life is parallel to Hell, but I must maintain.

And be prosperous, though we live dangerous

Cops could just, Arrest me, blamin’ us; We’re held like hostages.”

Fear, anxiety, courage, rage… these are all emotions Nas all too well when he came out with the first album, popularizing the trend for rappers to put childhood photos on their album covers. When Nas put him up, you could like into that little kids’ eyes and see the horror that he had soaked up over the few years he had been alive in the mean streets.

It Was Written and Beyond

With Nas’ second album It Was Written in 1996, there wasn’t as much of the gritty, dark beats and the street corner philosophies. Nas was clearly a little older, and a little richer than last time he opened up his book of rhymes. His New York City all-star team of producers like Q-Tip (A Tribe Called Quest), DJ Premier (Gang Starr), Pete Rock (Pete Rock and CL Smooth), and Large Professor (Main Source) had all been replaced, except DJ Premier, with slicker beats by Trackmasters (Mary J. Blige) Dr. Dre (Snoop Dogg). But Nas was still just as vivid with his wordplay, not missing a step on the mic.

Nas’ next two albums I Am… and Nastradamus were more commercial endeavors than It Was Written was, experimenting with club anthems and R&B singers on the choruses. Nas still had his reflections back to Illmatic, like the hard-hitting “Nas is Like,” but as both of these albums dropped in 1999, it seemed like the clarity of Nas’ intentions were floating more in the party mode at times.

Out of the other albums that he would drop between then and 2019, Nas was really cooking with heat on Stillmatic, getting back to challenging the minds of listeners with joints like “Rewind.” On this song he tells an entire store backward, the intimate soulfulness of “One Mic,” and the scathing darts that he dissed Jay-Z with during their epic rap battle with Nas’ flame thrower of a song called “Ether.”

The Work is the Reward

After 13 Grammy Award nominations for Nas songs spread across seven different Grammy ceremonies, to this day, he has remained unacknowledged for his efforts. The same could be said for his six MTV Video Music Award nominations that never materialized into wins. But for a rapper like Nas, his level of lyrism is its own reward. His songs aren’t the type of bouncy, fast food that you can shake it to for a month, and then get tired of. You have to live with his music, and the longer you do it reveals new meanings to you.

Nas is a soloist through and through. He does all the heavy lifting with memorable metaphors and satisfying similes to show you life as he sees it. But that doesn’t mean the man is anti-social and can’t play nice with others. First, there was his 1997 group project with his four-part crew called The Firm, featuring Nas, Nature, AZ, and Foxy Brown. The first two from Queens and the second two from Brooklyn. The sound got even more off into the slick R&B beats, but still with slick street poetry provided.

Another team effort that Nas has in his loaded catalog is an album called Distant Relatives that was recorded in the tropical sun of Miami as a stand-in for the Caribbean island of Jamaica with none other than the gifted son of the reggae king Bob Marley – Damian Marley. There was a beautiful cross-section of hip hop and roots reggae here, with guest appearances that make sense, such as Stephany Marley, K’naan, Dennis Brown, Lil Wayne, and Joss Stone.

Nas is a very low-key private persona, not all that interested in oversharing his entire life with people he doesn’t know. But his mystique has been used for cinematic effect in a film, must note-worthy being Belly, the 1998 crime thriller that benefited from its hip hop cast of DMX and Method Man, and the delicious cinematography from music video director Hype Williams. Nas’ real life has also been captured on the screen with the 2014 solid documentary known as Nas: Time is Illmatic, directed by One9 and featuring real-life acquaintances of Nas like Q-Tip, Pharrell Williams, Alicia Keys, and Swizz Beatz.

Back on April 10, 2013, Nas invested an unidentified six-figure amount into Mass Appeal, the media brand that includes a magazine, a record label, and a full production company for film and television, and creative agency as well. Mass Appeal has been known for putting out some of the most eclectic forms of underground hip ho to surface above ground.

They have been responsible for putting out albums from such creative talents as Detroit’s favorite producer, the late and great J Dilla, the two-member new-aged interracial version of Public Enemy – the crew called Run the Jewels with political poetry by Atlanta’s Killer Mike and Brooklyn’s El-P, the Harlem street swagger of Dave East, and Long Island’s young and gifted word wizard Bishop Nehru.

Nas Jones has worn many business hats, like opening his own sneaker store in June 2013, investing in a technology startup company that September, putting some loot into a job search app-maker called Proven, as part of a $2.8M round of investment in a viral video startup called ViralGains with the strength of his own Queensbridge Venture Partners portfolio.

You probably have seen Nas as a spokesman for Sprite’s brilliant “Obey Your Verse” beverage campaign, Nas’ partnership with Hennessy and their “Wild Rabbit” campaign, his job placement startup partnership with Koru to fund a scholarship for 10 college graduates to go through Koru’s training program with Nas as a guest coach.

Nas is the co-owner of a Cloud-based service LANDR, which operates as a drag-and-drop digital audio post-production tool, which helps to simplify the post-production “mastering” process of recording music. Nas is in the food business in New York City with the soul food restaurant known as Sweet Chick, with plans to expand nationally.

If you need some cool casual clothes with the Nas stamp of approval, he owns and operated a clothing brand called HSTRY. He has dropped large sums of money into startups like Lyft, the ride-sharing competitor to Uber, Dropbox for your digital organization needs, and Robinhood, which is a financial services company that provides people with the ability to invest in stock, ETFs, and engage in crypto-currency trading.

If you want to know just how much Nas is on the money when it comes to his investment decisions, back in June 2018, he was reportedly paid $4 million when Amazon acquired Ring, the doorbell company that provides home security from your smartphone, and PillPack, which operates as an online pharmacy. PillPack was an investment that was executed through Nas’ Queensbridge Venture Partners organization.

Outside of the Studio

When it comes to his private life, he is a pretty quiet guy, not one for the public drama. He has two children, one with his ex-fiancee Carmen Bryan, who gave birth to their daughter Destiny back on June 15, 1994, about two months after Nas’ debut album Illmatic was first released.

There was a moment in time when Nas and Mary J. Blige were dating each other. Nas was also married to singer Kelis between 2005 until they were divorced in 2010. They have one son together named Knight.

Back in July 2013, Nas received the prestigious honor from the Ivory League Institution Harvard University of having a financial fellowship put in his name to fund scholars and artists who prove they have the potential in the arts in the form of hip hop. It is called the Nasir Jones Hip Hop Fellowship.

By looking at the legacy of Nas, as previously stated, he never went to high school, but he has a scholarship fund in his name at arguably the most famous university in the world. It all began with the power of hip hop, how it provided a means for Nas to express his frustrations with the hardships of life in a productive manner, through his music.

Nas also inspired many of the great hip hop artists that have followed in his footsteps, such as J-Cole from North Carolina, Common and Lupe Fiasco from Chicago, Kendrick Lamar from Compton, Mac Miller from Pittsburgh, and Jay Electronic from New Orleans. Just imagine, Nas has accomplished all of this, and the man is still only in his 40s, and he is still putting out music, an artistic man that creates with purpose, from a street disciple to a living legend.