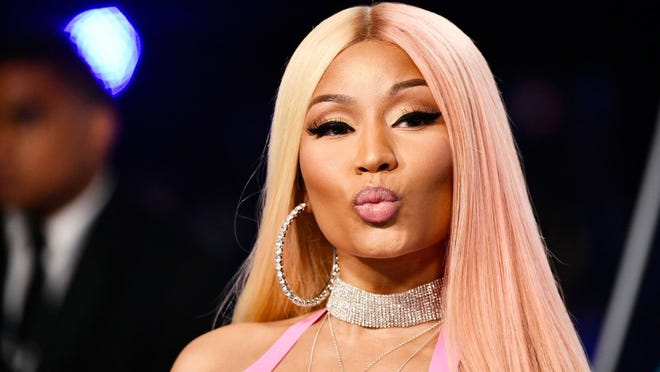 Onika. Nicki. Harajuku Barbie. Martha. Roman. The Queen of Rap. No matter how you address her, there is no doubt that you recognize how influential she has been to rap music. How did Nicki Minaj go from being another kid growing up in Queens, New York to the rap supernova we know today?

Here’s a timeline of the phases and the history of her career. The struggle, the losses, the victories, all of it. How it all came together to lead her to signing to one of rap music’s hottest record labels, winning Teen Choice Awards, People’s Choice Awards, countless nominations for Grammys, and becoming someone that, love her or hate her, you know her.

Nicki Minaj, born Onika Tanya Maraj, was born in Saint James, Trinidad and Tobago on December 8th, 1982. She and her family moved to Queens, New York when she was 5 years old.

She grew up in the home with both of her parents, and four siblings. Her father was an abusive, raging drug addict, and even set their family’s home on fire in an attempt to kill his wife. Nicki would go on, in her adulthood, to be very candid about her experiences she had with her father, and how it affected her. She reminds us that little girls don’t stay little forever, and they can and will use trauma imposed on them as fuel to make them strong and empowered. She found ways to get herself by, while coping with her parents fighting. Mostly, she began imagining that she was someone else. It was also then that she began developing alter-egos and made up personalities.

By the time she was twelve, Nicki had decided that she was going to make something of herself. She realized early on, that she had the talent and the drive to become larger than life. That’s when she auditioned for, and was accepted to LaGuardia High School of Music and Art, and began writing her own raps and pursuing acting.

She met her first career setback when she wasn’t successful with acting and, instead, worked as a server at Red Lobster, where she was later fired for having a bad attitude and being rude to guests. Although her acting career wasn’t working out very well, she did land a spot in an Off-Broadway production, In Case You Forget in 2001 before going back to doing restaurant and retail jobs, which she also got fired from for being rude to customers and having a generally unpleasant attitude.

Nicki started dating Safaree, a member of the New York hip-hop group, “Full Force”. Soon, she joined the team, and started writing her own verses. Performing with Full Force came to a halt when they tried to hire ghostwriters for her. She was adamant that she would write her own rhymes. No amount of attention was worth her creative integrity, and if it meant parting from the group…so be it.

After moving on, Nicki began uploading her music to MySpace. She also started sending her music directly to record labels. MySpace is where she was discovered in a big way, for the first time. CEO of Dirty Money Records, Fendi, saw her on the social media site, and immediately signed her to his label.

He is also credited for giving her the name “Nicki Minaj”. In 2007, while she was signed with Dirty Money Records, she dropped three mixtapes:

Shortly after the release of her third mixtape, Lil Wayne, who had already noticed Nicki and collaborated with her on a few songs from her mixtapes, decided he wanted her on his team and officially signed her to Young Money Entertainment. Young Money is also the label that produced Drake, Gudda Gudda, Tyga, Chanel West Coast. Lil Wayne is the president of the label, alongside Mack Maine.

As soon as she began making music with Young Money, she garnered the attention of other prolific rappers such as Yo Gotti, Gucci Mane, and Ludacris.  In 2009, she released her first single, titled “Massive Attack”. This track was meant to be the first single on her debut album, Pink Friday, but it was dropped from the record. The other songs on the album gained popularity very quickly among hip hop fans. Especially tracks that featured more well-known artists, such as Eminem’s verses in “Roman’s Revenge”. Roman Zolanski is one of Nicki’s alter egos, and we meet him first, on this album.

Roman is said to be a very mean, rude gay man from London.  He is the voice inside Nicki that delivers some of her most savage lyrics. We also meet Martha, Roman’s mother and one of Nicki’s personas. Martha can be heard at the end of “Roman’s Revenge”, and she can also be seen at the beginning of the music video for “Moment 4 Life” featuring Drake.  Nicki, Roman, and Martha would go onto sell over three million copies and go triple platinum.

She also became the first female solo artist to have seven singles simultaneously charting in the  U.S. Billboard Hot 100.

After the success of her first major studio album, Nicki Minaj started really coming into her own. Not only would she have another album coming up shortly, but she did some really influential and groundbreaking features on songs for other artists, most notably, her verse in “Monster” by Kanye West. Nicki’s verse in this song would go down in history as one of the best, most memorable verses by a female rapper.

If you were listening to hip-hop in 2010, chances are you will never hear the phrase “First things first” without Nicki Minaj’s voice in your head saying, “I’ll eat ya brains!” She really snapped on that track.  Her feature in this song would be only the beginning of a new Nicki Minaj era. The 2012 release of Pink Friday: Roman Reloaded , produced by Young Money/Cash Money Records, is where we find out that all of the sweeter, more romantic songs on her first album were just her way of easing us into her bold, quirky personality.

The sound was slightly less hip-hop, and a little more pop, electronica, and dance. Nicki seemed to just be having fun on this record, and honestly? This whole album is the anthem for summer 2012. “Beez in the Trap” and “Pound the Alarm” could never fail to get you going, whether you care to admit it or not. These tracks were, objectively, “bangers”.

Features on this album include:

The same year, Nicki made her film debut in Ice Age: Continental Drift. She voiced Steffie, a wooly mammoth. Her next silver screen appearance would be in the 2014 film

The Other Woman, in which she portrays a quick-witted and empowered assistant to a lawyer (Cameron Diaz). Her film career didn’t expand very widely, though.

She kept herself focused on her music. The 2012 tour for the album Roman:Reloaded lasted for a few months before she started working on her third studio album.

In December of 2014, Nicki Minaj released her third studio album, The Pinkprint. And this is where it all comes together. By now, we’ve seen a loving, and soft side of Nicki Minaj. We’ve seen the bizarre and unhinged part of her personality. But, The Pinkprint is the album that showcased her most notable quality. Her fierceness.

This is the album where Nicki’s lyrics were the most empowered and sometimes, the most savage. The singles from this album include:

The Pinkprint is said to have been inspired by Jay-Z’s Blueprint album. Nicki wanted a female version of that album, so she made one. Her third album went on to sell over three million physical copies, and a whopping 1.5 billion streams on Spotify.

This was also the album where Nicki proved to all the naysayers out there that she can, in fact, spit with the best of them and that her mouth can be absolutely reckless. She released a song called “Lookin’ Ass”, and it became one of the most popular tracks of pure savagery rap music has seen. She also collaborated with Queen Bey herself for their song titled, “Feelin’ Myself.”

Her fourth studio album with Young Money/ Cash Money Records, titled Queen was released in 2018, and sold over a million copies and peaked at number two on the Billboard Hot 100 list. Singles from this album include:

This album was said to be her worst selling album, although “Chun Li” is one of her most popular songs and music videos. But, it takes more than one single to carry an entire album, and the rest of the songs on Queen just simply are not some of her most memorable. This album has tracks featuring Ariana Grande (“Bed”), Eminem (“Majesty”), The Weeknd (“Thought I Knew You”), Lil Wayne (“Rich Sex”) and Foxy Brown (“Coco Chanel”). It was after the release of this album that critics really started to believe that Nicki was a better feature artist than solo artist.

Her fourth album even got criticism on the fact that it was “too long”, as if she could only be taken in small doses. She had already proven that she can definitely write her own rhymes, and she has her own very unique style, but can she stand alone on an entire album by herself? For many, it remains to be seen. For some, her albums have all been perfect just the way they are, and they could never get enough of Nicki. To each his own.

Influence and What’s to Come

It would be simply untrue to say that Nicki Minaj hasn’t been influential to the rap game, especially female rappers. However, what is the legacy she’s leaving behind as a woman? That seems to have been a question on everyone’s lips from the beginning. She owned, and flaunted her sexuality with ease and confidence that goes totally unmatched.

If I could package up and sell the kind of confidence Nicki Minaj carries, I’d be a trillionaire. And that’s so important to see coming from a woman. However, what’s also important is integrity, and the courage to say “no”, and to stand alone as opposed to seeking the companionship of those who are truly unworthy. Nicki doesn’t seem to have taken much into consideration when it comes to the company she keeps.

She remains very close with Drake, in spite of his scandals with teenage girls. She collaborated with 6ix9ine, in spite of him being a snitch. And, now she’s married to and expecting a baby by a man who is a registered sex offender. Her reputation, lately, hasn’t been too good. Does her past make up for it? Can we separate the art from the artist? Is Nicki an artist we’re separating from at all? I suppose the next couple years will tell us what we need to know about who she is, and where her career will end up.

Since her pregnancy, she has been very low-key, and we can expect to hear some crickets for a while, until the child is a bit older. For now, she lives on as an incredible rapper, songwriter, performer, and fashion icon.