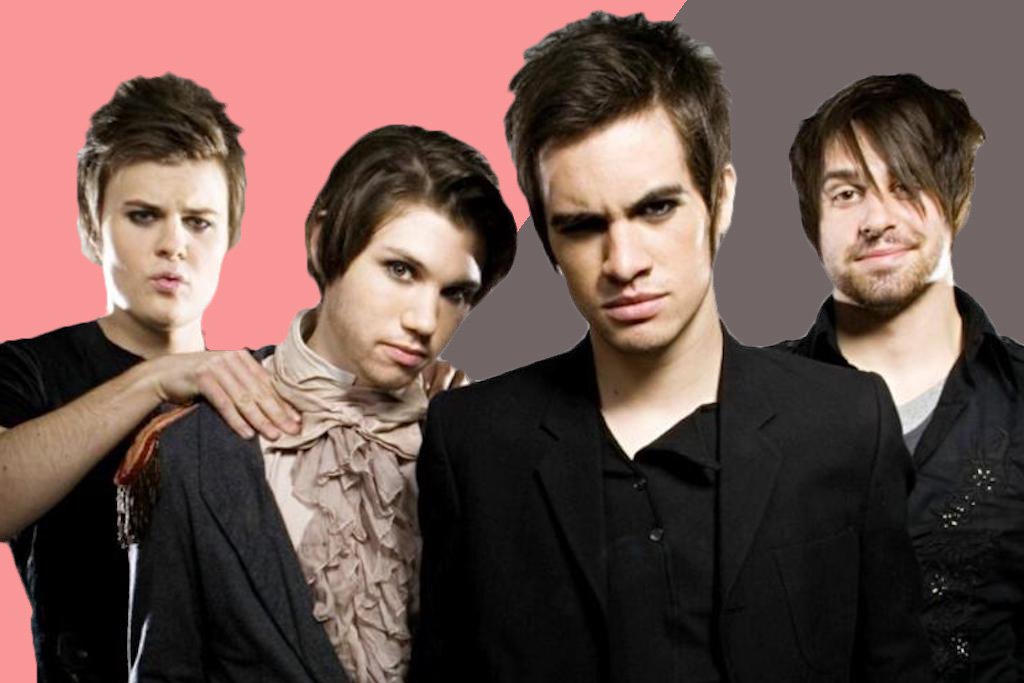 Considered one of the biggest acts to emerge out of the mid-2000s emo movement, Panic! At the Disco came to fame with a style that combines a powerful pop-rock sound with unique storytelling. Mentored and championed by fellow emo-pop favorites Fall Out Boy, Panic! At the Disco found early success on MTV with catchy anthems such as “I Write Sins Not Tragedies” from their 2005 debut, A Fever You Can’t Sweat Out.

While their initial album helped swell their fan base, some of their follow-up albums split fans and critics down the middle. Over the course of the band’s history, Urie has cited a number of musical influences such as soloists like Frank Sinatra and David Bowie, and groups like Queen, Weezer, Green Day, and My Chemical Romance. With four official releases by the band, and two solo projects, Panic! At The Disco has certainly had a storied history as one of pop music’s most well-known pop-rock groups.

What exactly was the nature of the band before Panic! At The Disco would primarily become known to the mainstream as a solo act? To find out how the band has changed forms and so much more about their complicated history, come follow us as we dig back into their archives to learn the entirety of their story.

Panic! At the Disco was formed in the suburban area of Summerlin, Las Vegas, in 2004, founded by friends Spencer Smith, the band’s drummer, and guitarist Ryan Ross. In their youth, the pair attended Bishop Gorman High School, where they were well known to their classmates for covering Blink-182 tunes.

“I was willing to do anything. Play tambourine, sell merch. I was just desperate to be involved.”

Panic! At The Disco slowly became known for their skill of crafting pop-influenced songs with theatrical touches, quirky techno beats, and reflective lyrics. As the band began cultivating their unique sound, they decided that they wanted different from the many death metal bands in Las Vegas.

While they were collectively working on music and building their career, Urie began working at Tropical Smoothie Cafe in Summerlin so that they could have enough money to afford the rent for the band’s new practice space. Urie claims that one of the things he did to fundraise their rent was sing for tips.

As the group began to focus more explicitly on building their careers, the four members decided to leave their educations behind so that they could pour all their energy into their music. In particular, Ross had a falling out with his father when he decided to drop out of college, and when Urie informed his parents that he was dropping out of high school, his mom and dad decided to kick him out of the house. Urie would eventually graduate in May 2005, and Wilson and Smith would finally finish school online.

After hearing Urie sing back-up during rehearsals, his band members decided that he should be made the Panic lead vocalist! At The Disco. The band began preparing demos and even sent music to Fall Out Boy’s bassist Pete Wentz who had just set up Decaydance Records. While the band had not yet played a live show, Wentz was impressed by their talent and decided to sign them to his new label – and so the band subsequently became the first band signed to Wentz’s label.

As soon as the general public began to find out that Wentz had signed the group, Fall Out Boy’s fans began to bash the group on the internet. In a 2006 interview Ross admitted:

“We knew what was going to happen. We had two songs online, and people were already making assumptions on what kind of band we were.”

By 2005, the band had been officially introduced to the music scene, and their debut album A Fever You Can’t Sweat Out went double-platinum. Wentz would work overtime to promote the band wherever possible. He was known to wear “Pete! At the Disco” T-shirts, while he would play onstage, and he would frequently mention and discuss the band while in his band interviews.

One such example was when Wentz was giving a press junket prior to the 2005 MTV Video Music Awards. He was captured on camera telling the press:

“I’ve got a couple of bands coming out soon on Decaydance, one being this band called Panic! At the Disco. Their record is going to be your next favorite record.”

In 2005, the band would relocate to College Park, Maryland, to record their debut album. While they only had preliminary versions of many of the recordings once they arrived in College Park, they would soon fill out those recordings by engaging in marathon sessions.

He claimed that while the group was working on completing the album, they were also getting on one another’s nerves – likely from having to live all together in a one-bedroom apartment sleeping on bunk beds.

On September 27, 2005, the band released its debut album, A Fever You Can’t Sweat Out. While the sales were relatively slow in the beginning, this pattern would begin to change. The album debuted quite low on the Billboard 200 album chart (in position 112), though it charted at number 6 on the Billboard Independent Albums chart.

By the time the group finished their first week on the charts, they had sold nearly 10,000 albums. Fans would eventually get to see the band in a music video four months later with the release of the video for their first single, “I Write Sins Not Tragedies.” With the release of this music video, the recording soared up the Billboard Hot 100 with the sales for this recording passing the 500,000 mark.

By the end of March 2006, the band announced that they would be headlining a tour, and in August of 2006, the group’s debut record was certified platinum by the Recording Industry Association of America (RIAA).

But, some members of the group had mixed feelings about all the fame that they were experiencing.

The band found tremendous fame by the second half of the 2000s – finding their way into the Billboard Top 40, appearances at Lollapalooza and the Reading and Leeds Festivals, and also receiving a Video of the Year award at MTV’s annual VMA ceremony among other notable moments. And yet, within the band, difficulties were slowly brewing.

In May 2006, Jon Walker replaced Brent Wilson as the band’s bassist. Wilson told MTV News that the group had kicked him out of the band via a phone call, and the one to make the call was Spencer. Wilson claimed that Brendon and Ryan were on the speakerphone as well though they did not utter a word or say that they were sorry for kicking him out.

Smith also revealed that Wilson did not write or play any bass on the album. They were instead recorded by Urie. Wilson then demanded a cut in royalties and threatened to take his former band to court.

In 2009, Walker and Ross became the next band members that left as well, citing creative differences. In the place of the band, Walker and Ross formed their own group, The Young Veins. Nearly nine years later, Urie recalled that the band’s breakup made it hard to leave his house at times because of how depressed he was.

Panic! At The Disco’s third album, Vices & Virtues, with the remaining duo singer/multi-instrumentalist Brendon Urie and drummer Spencer Smith. For the fourth album, Too Weird to Live, Too Rare to Die! Bassist Dallon Weekes joined the duo as well.

Once the band created Too Weird to Live, Too Rare to Die!, Urie was able to showcase the breadth of his eclectic taste in hip-hop and electronic music. By the fifth record, Spencer Smith decided to leave on the grounds that he needed to settle his drug issues. Bassist Dallon Weekes also departed from the official line-up and decided to remain a touring member only.

This meant that Urie was now at its helm as the sole original member and mastermind behind the band’s sound. By the fifth album, Urie was writing and recording the entire project as a solo artist with the help of some external writers.

On September 22, 2018, the band also announced that their long-time touring guitarist Kenneth Harris would be dismissed from the band. The reason for this dismissal, they admitted, was that he had been accused of sexual misconduct involving a number of underage fans. In Harris’ place, the band hired former Sparks the Rescue guitarist Mike Naran.

While Urie married Sarah Orzechowski in 2013, he would later admit that he identified as pansexual.

In an interview with Paper Magazine, Urie stated:

“I’m married to a woman, and I’m very much in love with her, but I’m not opposed to a man because, to me, I like a person. I guess you could qualify me as pansexual because I really don’t care. If a person is great, then a person is great.”

Love For the Environment

Activism is something that Panic! At the Disco is also well known for, particularly as it impacts the environment; for example, the group has worked really hard to remain environmentally conscious by working with two non-profit eco-organizations. The first was Reverb, an organization known to facilitate environmentally friendly touring. The second organization was Global Inheritance, which helped the band to become more active in their eco-activism.

The band also told MTV News that they decided to print their tour booklets on recycled paper using soy ink as an effort to think of the environment. They also contributed a share of their tour profits to charitable organizations that support the environment.

While on tour, they also changed their travel details so that they could move across the country on a bio-diesel fueled bus that also had increased opportunities to recycle, which included recycling plastics and encouraging people to recycle backstage as well.

The band also organized an “eco-contest” while on tour, and they disclosed that all the profits of that contest would go to a number of environmental organizations. A few years later, in 2011, the band decided to bring a Tesla coil on tour – specifically on stage. Tesla coils allow people to wirelessly transfer electricity, and it definitely allowed the band to think outside the box.

As far as touring is concerned between 2005-2019 Panic! At The Disco headlined a whopping nine tours, co-headlined four tours, and were an opening act for five tours, all the while promoting and performing the music that has been released across four albums as a band and the two solo project releases that have come out thus far.

Between starting out as a multiple-person band and then distilling down to one member, Panic! At The Disco have earned their place in rock music history. No matter which era of their discography you prefer to listen to, or which version of the band that appeals to you must, they have made their mark in mainstream music to last longer than the rumors and gossip.