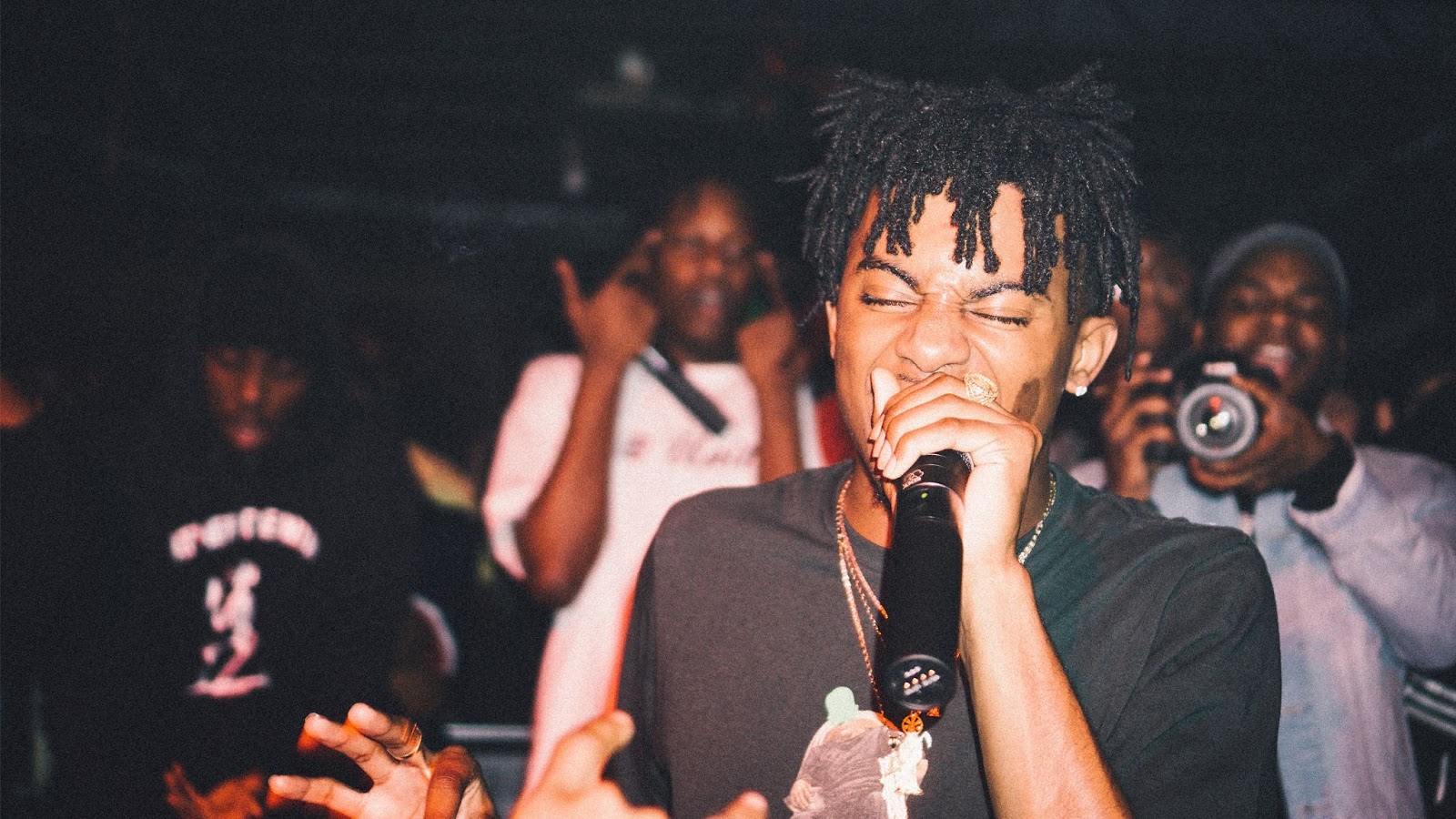 A rapper with a distinctive voice and brand, who has built an audience through jobs crossing over fashion, modeling, music, and his personal life, Playboi Carti has proved that anticipation is key, and he isn’t going anywhere.

Playboi Carti was born on September 13, 1996, in Atlanta, Georgia, under the name Jordan Terrell Carter. He grew up in Fairburn, Georgia, and recalls getting into trouble often as a kid. His first dream was to be an NBA player, so he strongly pursued basketball for a while, but a fight with his coach caused him to quit and led to his already spotty attendance record at school plummeting even further.

With a dislike for formal education all his life, Playboi Carti would skip school to work on music or make money at his H&M job. He was barely able to graduate, to the surprise of nobody that knew him, but managed to just make it.

The Career of Playboi Carti

A career built on hard work and quick fame due to a unique sound and image, Playboi Carti has climbed the charts for years now. However, although he does relentlessly control his image, pay close attention to his fashion and pursuits outside of music, and release original, featuring, and collaborating hits, the secret to his success has perhaps been the anticipation of what’s next.

Name Changes and the Beginning of Playboi Carti

Playboi Carti wasn’t Jordan Carter’s first stage name. First, it was Sir Cartier. A mixtape called Young Misfit was even released under the name Sir Cartier in November of 2012. The next year he decided to change the name to Playboi Carti and released songs on Soundcloud with the help of the label Awful Records, based in Atlanta.

In 2015 he decided to move to New York City. Although originally he stayed with family and friends, Playboi Carti soon moved into his drug dealer’s house. There, he met members of the ASAP group and was connected to ASAP Bari and finally, ASAP Rocky.

Carti made the decision to stay with ASAP Rocky and treat him like a mentor. With his new mentor, Carti really began gaining attention. After his song “Broke Boi” and a few collaborations did well, he toured with Lil Uzi Vert and ASAP Ferg. Eventually, he signed with Interscope Records.

2017 was the year when Playboi Carti really hit his stride. He released his first mixtape (named after himself), and it blew up, reaching 12th on the Billboard 200. Two songs, “Magnolia” and “Woke Up Like This,” did particularly well, and both ranked on the Billboard Hot 100. He promoted his mixtape while touring with Dreezy and Gucci Mane and worked on a few other popular collaborations to round out the year.

The following year of 2018 marked a shift in Playboi Carti’s career. He released his first studio album, Die Lit, in May and saw it hit 3rd on the US Billboard 200. Soon after, he began work on his next studio album and announced its impending creation to his fans. However, two years passed before anything else about the album was heard or any original content was released. During those years, he stayed relevant due to features on popular songs and press about his dating life.

Finally, in 2020, he dropped some original content with his song “@ Meh” and was featured on Drake’s song “Pain 1993”. Then came the promised album, Whole Lotta Red, which dropped on Christmas Day and was produced by Kanye West. The building anticipation for more work from Carti paid off, and the album hit number 1 on the US Billboard 200.

Playboi Carti’s music style has been described as mumble rap, as has the rap of many musicians of the newer generation who get their start on SoundCloud.

Similar to the other SoundCloud rappers of his generation, Playboi Carti’s style is focused on fun and catchy beats and lyrics. But unique to him is the high-pitched technique that he employs in many of his songs. This technique has been called “baby voice,” defined by words that aren’t quite enunciated with a stretched, whiny tone.

With the release of his latest album, Whole Lotta Red, Carti’s tone has stayed true to its roots but has become distinctly aggressive and dark with lots of voice distortion. Overall, he uses his voice to make his point rather than his lyrics. To him, it’s about the overall feeling of the song rather than the actual words.

Playboi Carti is a self-proclaimed introvert with a deliberately chosen public image, and yet, what he wants to portray to the public remains somewhat unclear.

As a man with a recognizable brand and face (namely his signature oval-shaped birthmark on his cheek), image has been important to Playboi Carti from day one. In fact, some have accused him of being more interested in the lifestyle of a rapper than in the actual music. Whereas his success in the music business seems to contrast that claim, there is some merit to it.

His first choice regarding public image came when he was working in Atlanta at an H&M and started to get recognized for the work he did on SoundCloud. He realized that he didn’t like how working at H&M made him look as a rapper and quit immediately, completely devoting his time to music instead.

Since his career has taken off, any misstep in the press has usually been directly addressed by him, such as the drama surrounding his leaked music during his two-year hiatus, where he immediately responded that it wasn’t intended. Anything else, especially issues with the law or with public relations, has been taken care of quietly behind the scenes. For example, his altercations with a girlfriend were paid off, and a punch at a driver in Scotland was also paid off.

The only thing Playboi Carti can’t seem to control is the other famous people he surrounds himself with – namely, his ex Iggy Azalea who has repeatedly voiced her frustrations on social media about his involvement in their shared child’s life.

Delivering a child alone, raising him with little involvement from the father, and celebrating the first Christmas without that father because he released a mixtape the same day – all claims of hers. Whether or not they are true will be debatable for all. After all, who can really know the details? However, either way, it’s press that Playboi Carti typically tries to avoid.

Perhaps this is why during quarantine, he claims to be in his element, talking to few and answering to even less. When you surround yourself with very little, there’s far less mess to deal with.

Playboi Carti has had a longstanding and well-publicized interest in fashion and the world of design. His style is youthful and playful, with a slight punk feel and a sheen of high fashion.

Modeling has had a large impact on his social media following. He’s walked runways, done editorials, and voiced commercials, some with large names in the business like Louis Vuitton and Givenchy. He has modeled in Kanye West’s Yeezy Season 5 Show, walked the runway for the brand Off-White and its creator Virgil Abloh, and done commercials for Nike.

Carti describes ASAP Rocky and Kanye West as two big influences in his life, both through fashion and music. This admiration likely stems from ASAP Rocky’s mentorship and Kanye West’s helping hand in the industry, as he helped produce Playboi Carti’s last album.

Additionally, Carti claims that Balmain is his favorite fashion label and has developed a close relationship with the creative director of Prada Raf Simons at the behest of the ASAP Group, who featured him in a music video.

Although Playboi Carti has received less recognition for his music in the way of actual tangible awards and nominations, his brand has become instantly recognizable to the public and has landed him a myriad of different jobs across the media sphere. All of this has led him to a net worth of around nine million dollars.

As someone who is very careful about the image he maintains, Playboi Carti tries to keep a relatively low-key personal life. However, issues with the law and famous girlfriends tend to keep him more in the media he tries to avoid.

In 2017, Playboi Carti was arrested for domestic abuse charges against his girlfriend after a very public argument outside LAX that resulted in Carti forcefully pulling her out of the airport. Eventually, the charges were dropped.

When on his 2018 tour in Scotland, Carti punched a driver and faced a fine after trial. In 2019, he and then-girlfriend Iggy Azalea were robbed of hundreds of thousands of dollars worth of jewelry after a break-in.

Most recently, in 2020, Carti was arrested on gun and drug charges after being pulled over for an expired tag on his car. The police found multiple bags of marijuana, oxycodone, Xanax, codeine, and three guns when searching the car. He was released on bail the next day.

Although he has had rumored relationships, including one with a public physical altercation in LAX with a nameless girl, Playboi Carti has only had two publicized relationships.

The first was a brief fling with the model Blac Chyna in 2017, who’s most known for her relationships with the rapper Tyga and Rob Kardashian, brother to the Kardashian sisters (to which she has a child from both relationships). The most recent relationship has been an on-again, off-again relationship with fellow rapper Iggy Azalea that started in 2018. The two had a baby together in 2020, a son named Onyx Kelly, and have since confirmed that they are no longer in a relationship.

What Does the Future Hold for Playboi Carti?

For now, the future for Playboi Carti involves promoting and playing his new album wherever and wherever Covid-19 will allow it. As an album only less than two months old, promotions on talk shows, radio shows, and general media have yet to be concluded and can only help Playboi Carti’s exposure.

A fervent hope that Playboi Cardi has always expressed is a desire to design his own clothes one day. Due to his clear interest in fashion, it seems likely that fans can look forward to this relatively soon, even without confirmation from the rapper himself. In the meantime, they can be sure that his passions for fashion will continue to manifest in modeling in various forms.

Another desire that Playboi Cardi has expressed is a want to help mentor younger artists and rappers, just like he was mentored back in the day by the ASAP group and specifically ASAP Rocky. With his constant collaborations and features, this seems like something that’s likely to happen eventually.

Beyond that, he is still a new father to his son Onyx (Onyx’s birthdate is still not clear) and is likely to be caught up in the new milestones of fatherhood and the pressures of co-parenting with his rapper ex Iggy Azalea.

How Playboi Carti Emerged from the Atlanta Underground | GQ

Cover Story: The Secret Life of Playboi Carti | The Fader