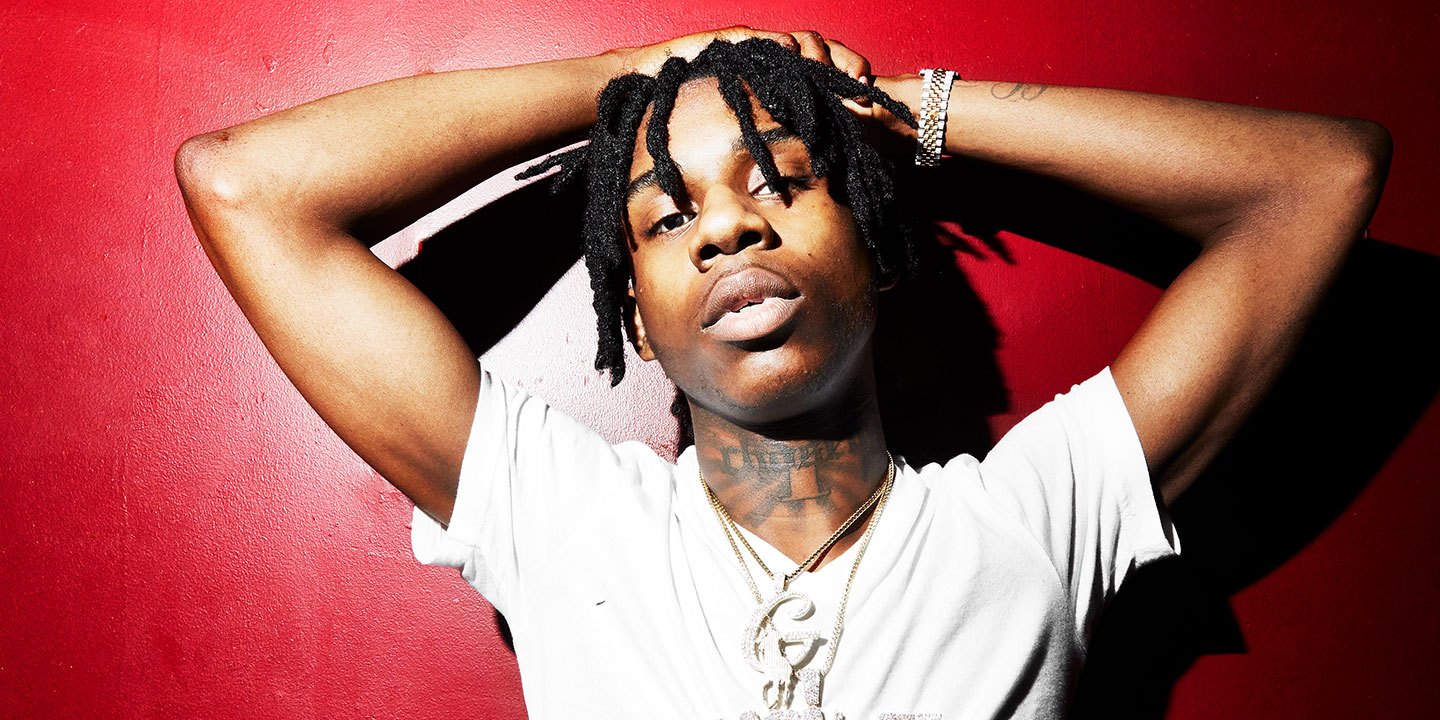 Chicago is a big city known for being a home to comedy, baseball, deep dish pizza, and without doubt, some of the most prominent rap and hip hop artists in the game. Many generations of rappers have hailed from the Windy City and taken the world by storm, and the newest batch of artists from Chi-town are no exception.

Chicago is a big city known for being a home to comedy, baseball, deep dish pizza, and without doubt, some of the most prominent rap and hip hop artists in the game. Many generations of rappers have hailed from the Windy City and taken the world by storm, and the newest batch of artists from Chi-town are no exception. At their forefront is an up and coming young man whose maturity of sound and sensibility belies his years: Polo G.

He may be young, but make no mistake: Polo G is not here to play. The hip hop artist demands to be listened to and taken seriously, and with a series of hot tracks and two albums under his belt already, there is little doubt that he is earning his place in the world of hip hop notoriety. Read on to get the full scoop on the Polo G story, past and present.

The Early Years of Polo G

The artist we now know and love as Polo G was born under the auspicious name of Taurus Tremani Bartlett on January 6, 1999. He was born and bred in the Old Town neighborhood of North Chicago on the 1300 block of Hudson Avenue. Taurus Tremani was raised in a fairly large family, with three other siblings and both parents around. They lived in an apartment complex named Marshall Field Garden Apartments, which was a small low income projects building.

When asked how his upbringing in Chicago impacted his artistry as a rapper, Polo G commented, “We [Chicago rappers] have a different story to tell. As black men from impoverished areas, we all experience the same struggles.

Growing up in Chicago, it’s more extreme. We live a fast-paced life at a young age and go through a lot.”1 All of his music is rooted in his past and the events, people, and places that shaped him. His Chicago roots provided the grounding for Polo G’s original drill sound, but over time, his sound has evolved to be more musical and melodic.

Growing up, Polo G had a number of favorite rap and hip hop artists that would later be influences on his own work. He was big into Lil Wayne as well as Gucci Mane, and he also strongly identified with other upcoming Chicago rappers like Chief Keef, G Herbo, and Lil Durk. Polo G also cites legendary hip hop artist Tupac Shakur as one of the main inspirations for his work. His more melodic work takes on its own quality, but it definitely draws comparisons to the work of his compatriot G Herbo.

The Life and Music Career of Polo G

Polo G cites the first song that he ever recorded as a track entitled “ODA.” The first experience of recording terrified and electrified him, but he soon found his groove and became comfortable in the studio. It was in 2018 that the budding artist made his first account on SoundCloud, leading to the subsequent release of his song “Gang with Me,” a single that rapidly garnered plays in the millions.

While he was rising in prominence and becoming a name in the game, Polo G spent a string of visits in the prison system, serving time being locked up in the Cook County Jail in Chicago. It was during his incarceration that Polo G came up with his 2018 single “Finer Things,” an inspirational rap with words to motivate and support others caught up in the thug struggle. The song holds mass appeal and caught the attention of people from all walks of life, garnering upward of 25 million YouTube views since its debut.

Also in the years of 2018 and 2019, Polo G had some developments in his personal life. He began dating a young woman by the name of Crystal Blease. In July of 2019, Polo G’s son Tremani was borning. Shortly thereafter in August of the same year, the rapper was sent to the hospital in nearly fatal accident when he almost overdosed on substances at a party.

In the midst of it all in 2019, Polo G released the track “Pop Out,” a song that featured fellow rapper and XXL 2020 Freshman Class member Lil Tjay. The official release took place on February 1; the music video, however, came out on January 13. This track would be the impetus for Polo G finally getting a record deal, signing on with Columbia Records. Billboard magazine ranked “Pop Out” as number 35 on its list of the 100 Best Songs of 2019 and referred to it as a “hard-nosed anthem.” The song climbed up to the number 11 spot on the United States Billboard Hot 100 chart.

2019 also marked the release of Polo G’s first studio album, entitled Die a Legend. The album was announced on a post through Polo G’s Instagram account on May 26, 2019, with a listing of the tracks coming out a week after that.

The album itself was then released on June 7, 2019, and Die a Legend would go on to rise on the Billboard 200 chart to the number 6 spot. This was Polo G’s first ever top ten album. A number of fellow artists featured on Die a Legend, including Gunna and Lil Baby on the “Pop Out Again” remix to the original “Pop Out” track.

Critics gave the debut album positive reviews and acclaim overall. Many were impressed by the artistry and heavy lifting on the album’s front end. One review stated, “Chicago rapper Polo G is a writer in a world full of freestylers. In the data-dump era, where artists churn out as much music as they can, he makes two songs in the time it might take others to make 20. He is careful and meticulous, malleable and introspective. His sound totters between drill and pop, sometimes hard, sometimes smooth. Eventually, he blurs the lines between them.”2

Die a Legend was certified Platinum for sales of over one million units in the United States by the Recording Industry Association of America (RIAA).

Tracks Listed on Die a Legend

The second album by Polo G, proudly entitled The Goat, was announced on the artist’s Instagram on May 5, 2020, along with imagery of the album cover. Prior to the debut of the album, the singles “Go Stupid”, “DND” (both of which featured Stunna 4 Vega, NLE Choppa, and Mike Will Made It) and “Heartless” (which featured Mustard) were made public.

An announcement for the track “Go Stupid” was made public via an Instagram post by Polo G that took place on Febryary 7, 2020, which was then followed up by a teaser post in which a small sample of the song was posted on February 12. Finally, “Go Stupid” was released on February 14, 2020 (a special Valentine’s Day debut) and would go on to hit number 60 on the United States Billboard Hot 100.

The music video is set in a public high school and features all of the artists dancing around. The video for “Go Stupid” has since become hugely popular on the app TikTok and is often used for tutorial creation videos by fans. It is interesting to note that the song contains no actual chorus. Rather, it is a constant stream of the three rappers going verse to verse with each other against the beat. The track highlights Polo G’s ability to lay down a series of fast and precise bars, demonstrating his skill in the game.

The release of the album then took place shortly thereafter on May 15 and was handled by Columbia Records. Upon its release, the album debuted at the number two spot on the Billboard 200 chart. Also notable are the ten Billboard Hot 100 singles included on the record, which included “Be Something” (which climbed to 57) and “Flex” (coming in at number 30). These tracks featured performances from Lil Baby and Juice Wrld, respectively. The Goat went on to be certified gold for selling over 500,000 units by the Recording Industry Association of America.

It was not long after The Goat’s debut – about a month later, in fact, on August 11 – that XXL came out with the 2020 Freshman Class list. Polo G was included on this lineup along with fellow artists Chika, NLE Choppa, Jack Harlow, Lil Keed, Lil Tjay, Fivio Foreign, Calboy, Rod Wave, Baby Keem, 24kGoldn, and Mulatto.

Overall, the second album garnered favorable reviews from the critics. It was given a total of 79 out of 100 overall from Album of the Year, and writer for Pitchfork Paul A. Thompson wrote of Polo G that “The Chicago rapper’s follow-up to his riveting debut LP argues for him as an adaptable and unmissable talent, an unlikely star in a new major-label system.”4

Tracks Listed on The Goat

Samples used on The Goat include bits from the song “Changes,” which was written by Tupac Shakur, Deon Evans, and Bruce Hornsby (performed by 2Pac with a Talent feature) as well as from “The Way It Is” by writer Bruce Hornsby.

Polo G has multiple singles to his name, both listed as the main artist and as a feature. A listing of his single tracks includes the following:

“Wishing for a Hero”(featuring BJ the Chicago Kid)

Polo G’s artistry has given him the chance to earn major notice and credibility already. He received the invitation and was given the opportunity to perform as the opening act for Cardi B and other artists in Chicago at the WGCI Big Jam, a huge event and moment for the young artist which he credits as one of his best to date.

He cites the buzz that he has garnered in the city of Chicago as the reason he was able to achieve this massive honor, mentioning that all of his YouTube views, radio play, and interviews were a huge part of his success.

He is in no way slowing down, though, and he wants to continue wracking up accomplishments and accolades by keeping his fans on their toes. He seems to walk the line of constantly experimenting with new sounds and reinventing himself while sticking to his roots.

As one who plans to be the biggest name in hip hop, Polo G definitely has the hustle mentality. He stated in an interview, “I got a message to convey to the world. I have much more listeners that can tap in and get connected with me. I’m versatile with my sound. I can switch it up a lot. I can produce a rock record; if you want me to produce a street record, I can do that as well. It’s like whatever lane I’m put into, I’m going to flourish.”

He even says it himself when asked for words of advice to his fans who are in search of the path to their own dreams: “Never give up no matter who believes in you or supports you. Believe in yourself and focus on your dream. Show those who doubted you that you can do all the things they said you couldn’t.”