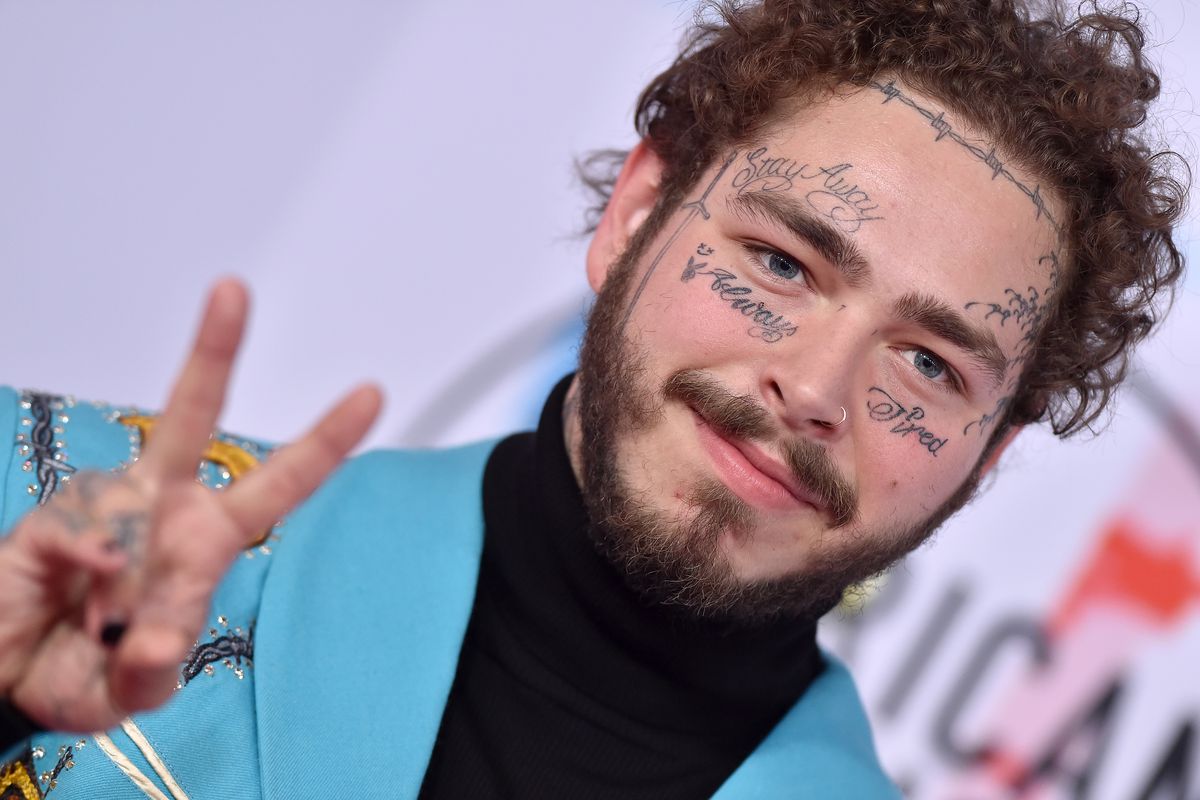 When a new white rapper enters the scene, there’s a natural tendency for hip-hop heads to look askance. But regardless of how some people feel about him, Post Malone is one of the biggest success stories of rap in the 2010s. By building a fanbase of listeners who might not traditionally be inclined to listen to rap – and by blurring the lines between different genres – he’s arguably changing the popular hip-hop game.

Despite being born on the Fourth of July (of 1995), Malone’s early life was relatively inauspicious. His given name is the far more ordinary Austin Richard Post, and he’d spend the first nine years of his life in suburban Syracuse, New York. Malone’s father had DJed when he was younger, and he was conscientious about making sure that young Austin was exposed to as much music as possible.

By the time his family left for Grapevine, Texas, Malone listened to everything from country to hip-hop to rock music. While his father worked as the concessions manager for the Dallas Cowboys, Malone’s interest in music developed into a passion for making music. But his pathways were conventional for young men his age. Preteen Malone first considered learning guitar thanks to Guitar Hero.

When Post Malone first came onto the scene, there was a lot of speculation about his name. The most popular theory was that he named himself after Karl Malone, but that couldn’t be further from the truth. By age 14, Malone had decided to try and make a name for himself in the hip-hop game, and it was at that age that he used an online rap name generator to develop the Post Malone identity. It’s a name that would stick.

His first forays into music were on the opposite musical spectrum from hip-hop. His audition for the metalcore band Crown the Empire fell apart when his guitar strings broke, and he took that as an opportunity to explore more solo work. His first mixtape, Young and After Them Riches, was made when he was only 16 and made with free software platform Audacity. Unfortunately, only a couple of songs from the mix remain.

The College Years and Early Success

After high school, Post Malone made a brief stab at a more conventional career path. A short stint at Tarrant County College ended with him dropping out and leaving for LA with his longtime friend (and competitive gamer) Jason Probst.

It was in Los Angeles that Post Malone first immersed himself into a truly committed artistic community. He joined with other musicians and aspiring producers to start the group BLCKVRD. Together, many of the members rented a house in the San Fernando Valley. It was a creatively prolific period for Post Malone and helped him shape the themes that would come to define his music.

This is also where he met Rex Kudo and 1st Down of the group FKi. The two would go on to produce a handful of tracks, but it was “White Iverson” that was the one real breakout of the bunch. It would receive praise from luminaries like Wiz Khalifa and Mac Miller but earned some disdain from others. But the song – in which Malone compared himself to all star player Allen Iverson – demonstrated Malone’s swagger and provided him with access to some of the biggest names in the business.

The Rise to the Top

Post Malone’s ascendancy happened practically overnight. Within a month, the video for “White Iverson” had hit over a million views, and Malone was courting deals from some of the biggest recording companies in the world. Even more important, he was getting offers from artists and other celebrities who saw a rising star in him.

2015 saw Post Malone performing at the 18th birthday party of Kylie Jenner, and he’d also find the time to record with her brother-in-law Kanye West. Other big names Post worked with in these early days included Young Thug and 50 Cent. But his friendships extended well beyond the hip-hop game. Around this time, Post Malone would befriend Justin Bieber and even tour with him.

May 12, 2016 saw the release of Post Malone’s first mixtape – entitled August 26 – and while that’s often a way for artists to get a foot in the door, Malone didn’t have to worry about publicity. He’d have his television debut a mere month later. Even the name was a form of self promotion. The date in question was a reference to his then-upcoming debut full album Stoney.

Reaffirming His Commitment to the Game

As his mainstream celebrity was coming into its own, there were questions about what Post Malone’s intentions were. As a white rapper with influences that spanned genres and people close to Malone stating that he wasn’t interested as much in hip-hop as he was in country and rock, there were questions about whether he had aspirations to become a rap legend or a pop star. Fans wouldn’t have to wait long. While it would take a few months longer than expected, it would finally be released in early December.

Stoney made clear his intentions, although it didn’t earn him an immediate place in the annals of hip-hop history. His song “Congratulations” earned Post Malone his first spot in the top ten of Billboard Hot 100, and Stoney was certified double platinum within a year. But Post Malone himself has expressed his concerns over the artistic merit of Stoney.

While Stoney solidified Post Malone’s staying power as more than just a one trick pony, it also proved his potential as a pop music mainstay, and his closeness with other celebrities meant that he could continue to be a presence in the pop culture milieu for years to come.

But Malone wasn’t content to rest on his laurels. Beerbongs & Bentleys was announced in February of 2017 and would be released the next year. The pause didn’t do anything to cool down the appeal of the white rapper. A single released with Ty Dolla Sign, “Psycho”, debuted immediately at number two on the Hot 100 – his third to chart in less than three years. When the album finally dropped, the success was immediate. It went platinum over the course of just four day.

And while there had been a lot of hype surrounding Malone in his first few years as a breakout star, Beerbongs & Bentleys brought with it institutional credibility. The album earned him four Grammy nominations (including one for both the best album and the record of the year. He wouldn’t take away any statues, but he would end up performing at the awards ceremony.

Further Into the Mainstream

Malone may have not won any awards at the Grammys, but he performed alongside the Red Hot Chili Peppers. It would just be one of many moves that would integrate him further into the mainstream. Even months after the release of Beerbongs & Bentleys, Stoney remained in the top of the charts – breaking the record for Michael Jackson’s Thriller with a total of 78 weeks.

Ultimately, Hollywood is Burning didn’t prove to be as successful as earlier records, but that doesn’t mean it wasn’t important. With appearances by figures as varied as Ozzy Osbourne and Young Thug, it reinforced his credibility as a chameleon capable of moving seamlessly between genres. The album also seeped through to a variety of different radio stations – including those targeting alternative, rhythmic contemporary, and contemporary hit markets.

The single “Sunflower” was a major accolade, as it was Post Malone’s first song to reach number one on the Billboard US hot charts. Collaborator Swae Lee returned for “Sunflower” following her appearance on Beerbongs & Bentleys. “Sunflowers” would also be released as part of the Spider-Man: Into the Universe soundtrack.

Diversions into either acting or broader business interests isn’t at all unusual for hip-hop artists. In fact, it’s practically expected once an artist reaches an appropriate level of fame. Post Malone just began to make the transition earlier than many. The release of “Sunflowers” on Spider-Man: Into the Spiderverse was accompanied by a small voice acting role for Malone. And while Malone has yet to break out into Hollywood the way Will Smith and Common have, he’s seeded the past few years with smaller roles in both TV and film.

But if developing ventures are any indication, Malone’s auxiliary interests fall mainly behind the scenes. Plans are already in place to develop his own film production company and record label, but he’s also found success in the world of wine and spirits. Maison No. 9 – Malone’s unique brand of rosé wine only lasted two days on the market before selling out.

Today, the world is Post Malone’s, and he’s so comfortably positioned that he could pivot his career practically any direction he wanted. With a main home in Los Angeles and a multimillion secondary home in Cottonwood Heights, Utah, he could comfortably retire today if he wanted to.

But Malone’s plans to continue to expand his career in the world of music are clear and present. A concert in March – during the early days of the Covid-19 epidemic – sold out to a total of 20,000 attendees. At the time, he drew some backlash thanks to rising concerns about a pandemic. Later shows were cancelled in the wake of the controversy. But with lockdown measures in full swing, Malone has kept busy with his musical interests. He appeared on “Tommy Lee” by Tyla Yahweh, and he’s already announced his plans to release a new album before the end of the year.

If you want an idea of how broad Post’s influences are, all you have to do is take a look at his knuckles. That’s not a threat. The tattoo portraits on his fingers celebrate musical luminaries that include half of the Beatles, Bankroll Fresh, and Stevie Ray Vaughan. That could begin to explain the diversity of different genres his music often flirts with.

But the two portrait tattoos on his arms perhaps best typify Post Malone’s heroes – even if they couldn’t be further apart in terms of influence and position. Malone has spoken often about how folk singer Bob Dylan and president John F. Kennedy are heroes of his, thanks to the roles both men played into fighting government corruption and creating a more equitable view of America.

That vast amount of influence, as well as his meteoric rise to the top of the charts, has convinced many in the hip-hop community that he’s a “culture vulture” for his own fame and wealth. It’s an argument he’s defended against, and he’s even lobbied against the current trends in hip-hop, arguing in favor of the sort of socially conscious lyrics that used to be prevalent in the genre.

Despite his diversity of interests, rap has remained the core of Post Malone’s musical oeuvre. Trap, rap rock, and cloud rap are all immediate influences on his first three albums, and he’s come to be defining influences in those sub-genres.