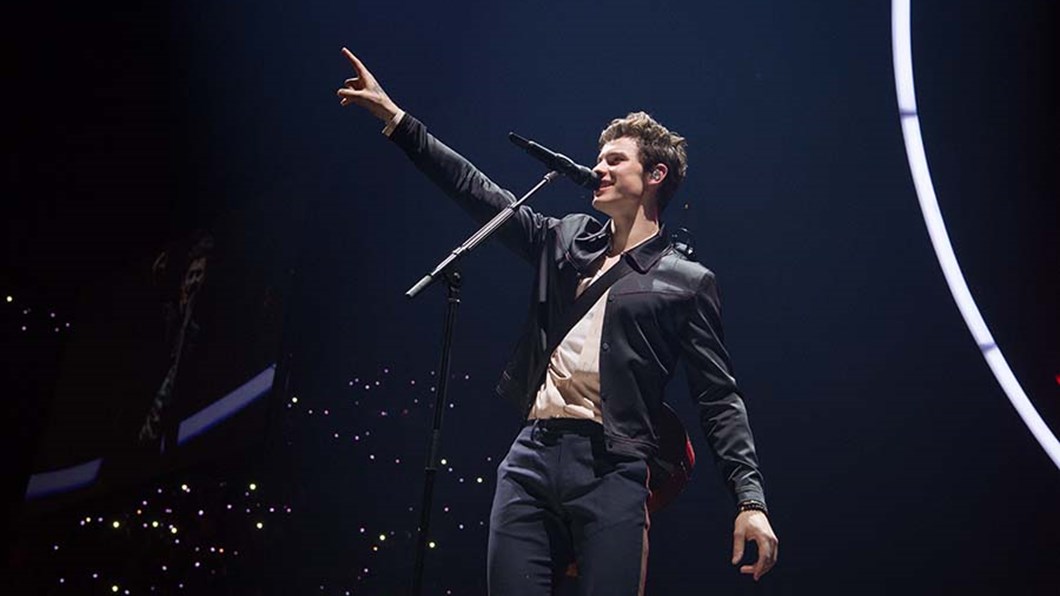 Shawn Peter Raul Mendes was born in Pickering, Ontario. Unlike a lot of musicians, he didn’t have to wait long for his big break. He loved music from a young age and taught himself to play guitar at age 14, then started posting cover songs to various sites. His love of music has extended throughout his life. Less than a year after learning to play guitar, he hit it big. He entered a cover song contest sponsored by Ryan Seacrest in April of 2014 and won by covering A Great Big World’s “Say Something”.

His desire to be a singer guided him in his youth to begin making music. Although he was very young at the time, his wavering, soulful voice, and raw talent propelled his career from there. Island records did not hesitate and signed him on their label in 2015. In June of the same year, he released his debut single “life of the party”.

At the young age of only 15 years old, he was already signed with one of the biggest labels in the industry and would go on to top Billboard’s Top 100 and became the youngest artist to ever get a single in the Top 25 position. Although it must be said that his perfect smile and good guy persona couldn’t have hurt him in his achievements. He was known as a charmer and a heartthrob in the industry he was dominating at such a young age.

He continued his claim to greatness—releasing the album Handwritten to a warm welcome at number one in the United States, his home country of Canada, as well as, Norway. This debut album included “Stitches”, his first song to absolutely dominate radio airplay. It seemed evident to everyone but Mendes that he was destined for greatness.

Mendes continued to work steadily throughout the next year toward a new album, and in September of 2016, Illuminate was released with fanfare to an even wider fan base. It was instantly well received and sold 145,000 copies. The entire album is filled with tender ballads, which only further cemented his flawless, “good guy” image.

He then took the opportunity to again showcase his soulful, raw voice and began performing  “Mercy” on piano. He continued posting videos of sold-out stadiums on Youtube, including two more huge hits from Illuminate–‘Treat you better” and “There’s nothing holding me back”.

Who has Shawn Mendes Dated?

Becoming famous overnight might sound amazing, but going through your adult transition and first romances with the entire world watching is no piece of cake. One of the worst parts of being so busy for Shawn was the fact that he could not date like a normal teen. Tabloids immediately took the opportunity to attack his sexuality. Shawn himself admitted in a Rolling Stone interview that “I’d like to say I don’t care about it, but that’s not true” in response to the multiple media allegations that he was gay.

In 2018, he attended the Met Gala with Hailey Baldwin. I know what you’re thinking, Justin Bieber’s wife? Well, not at that moment. Photographers snapped candid photos of the “couple” holding hands and pictures of them hugging outside his home in Toronto. Rumors flew, but when Shawn was questioned in the same Rolling Stone interview, it seemed like an earnest response; He stated “I don’t even wanna put a title on it. I think it was more of a zone of limbo”. And that’s a lot of what navigating the world of dating really is anyway, right? Limbo. He just had to go through it with every person on the planet throwing their opinion, no pressure.

Unfortunately, the controversy didn’t end there. Rumors flew that it had been that Shawn was rejected because as soon as Hailey Baldwin rekindled her Bieber fever, fans immediately noticed Shawn Mendes was no longer on her Instagram. It didn’t end there, tabloids started reporting that Bieber’s comeback song was another hit directly aimed at Shawn—stating his lyrics “Him or me, be real, baby, it’s a no brainer” were a final jab regarding Shawn’s former relationship with Mrs. Bieber.

If that wasn’t enough, his friendship with Camilla Bello has been under constant scrutiny. The gay rumors continued despite the evident sparks. Shawn and Camilla actually wrote a duet in 2015 while touring with Taylor Swift called “I Know What You Did Last Summer”. Somehow this flew under the radar as anything other than a song for almost two years. Then in March of 2017, they covered Ed Sheeran‘s “Kiss Me” and uploaded it to Youtube. At this point, speculations and opinions started flying. In May of 2017, Shawn gushed over Cabello’s “Crying in the Club” on twitter. He went all the way, saying “speechless.. goosebumps all over. You’re incredible”.

But everyone was still in the dark, as both parties were still only claiming that they were good friends. The world would have until April of 2018 for Shawn to open up in an interview about Cabello. He candidly said “She’s my” favorite person in the whole world”. How adorable is that? Seriously?

Camila Cabello is an energetic young singer who began in 2013 with the girl group Fifth Harmony. Camila Cabello was born in Cuba and spent her youth there; “her family shuttled for the first five years of their lives between Havana and Mexico,” MTV said in a bio of her life, before moving with her mother to Miami in the year 2003. Cabello then attended the Palmetto High School in Miami in 2012 when she threw her hat into the ring when she competed in the X-Factor for the TV Talent Competition.

Though she went into the competition as a solo act, show creator Simon Cowell then decided to put her together with four other contestants (Lauren Jauregui, Normani Hamilton, Ally Brooke, Dinah Jane Hansen) to create the ready-made girl group Fifth Harmony. They didn’t win the X-Factor grand prize (eventually losing to working-class country singer Tate Stevens), but with Cowell’s gracious backing, Fifth Direction soon took off and Cabello quit high school to pursue her musical career and pursue her professional dreams of becoming a pop sensation. Fifth Direction’s first EP, Better Together, was released on 22nd of October 2013 with the single “Miss Movin’ On.” They then spent much of 2014 on tour and doing a number of promotional appearances for their music and were named “Artist to Watch” at MTV’s 2014 Music Video Awards, and late that year got their own personalized line of Barbie dolls. The franchise was very successful and the dolls became collectibles for their fans.

Cabello was a vibrant presence of the group and kept it alive with goofy laughter and her patented sensual Latin flavor that she added to the group.

Her extreme popularity was boosted by the news that Austin Mahone dated (and then ruptured with) YouTube pop star. In January 2015, the first full album of Fifth Harmony, Reflection (with the singles “Boss” and “Sledgehammer”), was released.

At the 31st annual SOCAN Awards, Shawn Mendes set a new milestone for his career, winning five awards within a single year.

He took songwriter of the year for the second time and also won the international song award (for “Señorita,” his megahit collaboration with then-girlfriend Camila Cabello), an international achievement award, and even two pop music awards for “Señorita” and “If I Can’t Have You.”

The SOCAN Awards were initially planned for 30 March but were then later postponed because of the COVID-19 pandemic this year. The awards have been moved to a simulated ceremony and introduced this week.

Shawn Mendes, the pride of Pickering, Ontario, Canada, was also a big winner at this year’s Juno Awards, which were unfortunately likewise delayed because of COVID. The show was expected to take place on 15 March. The winners were officially announced on June 29th at an online exhibition for the event. Shawn Mendes also won Junos for the “Señorita” artist of the year and also for song of the year. He is one of the first artists in the history of the Juno Awards three years later to win each song.

And the awards and nominations just keep on coming for the famous and talented Shawn Mendes. He is currently nominated for three Billboard Music Awards: Top Hot 100 song and top collaboration (both for “Señorita”) and top radio songs artist. His continued success in the music industry has led many observers to suspect that he will continue to be a rising star within the industry and a mover and shaker in the pop culture sphere in general.

In May of 2018, Shawn released his self-titled album. This can be seen as a nod to coming into his own as an artist in his own right, finally finding security from the young man he was just four years prior. It was a difficult journey for him, he has said. He has stated in recent interviews that he was afraid that this album would not seem “cohesive” enough to his fans and to critics, stating that he was apprehensive and that he had wanted to embody several different musical genres into the work, including Rock and Blues. Little did he know how unfounded his hesitation truly was. This self-titled third album was the ultimate tribute to his dedication to music, and both fans and critics agreed that it was a smash hit.

He has also collaborated with the talents of Khalid and Julia Michaels and the album outsold both previous albums within the first week of its release. Surely, 182,000 was enough to finally give Shawn Mendes the confidence to feel that he is finally worthy of his momentous success—a victory that was hard-won over his long past of negative gossip and criticism.

He confessed a major source for his inspiration to Rolling Stone when he stated that he “love (s) weed,” but “wouldn’t tweet that—not yet, at least”. He also went on to reveal that when he’s home he likes to ”smoke and then play guitar for seven hours”.