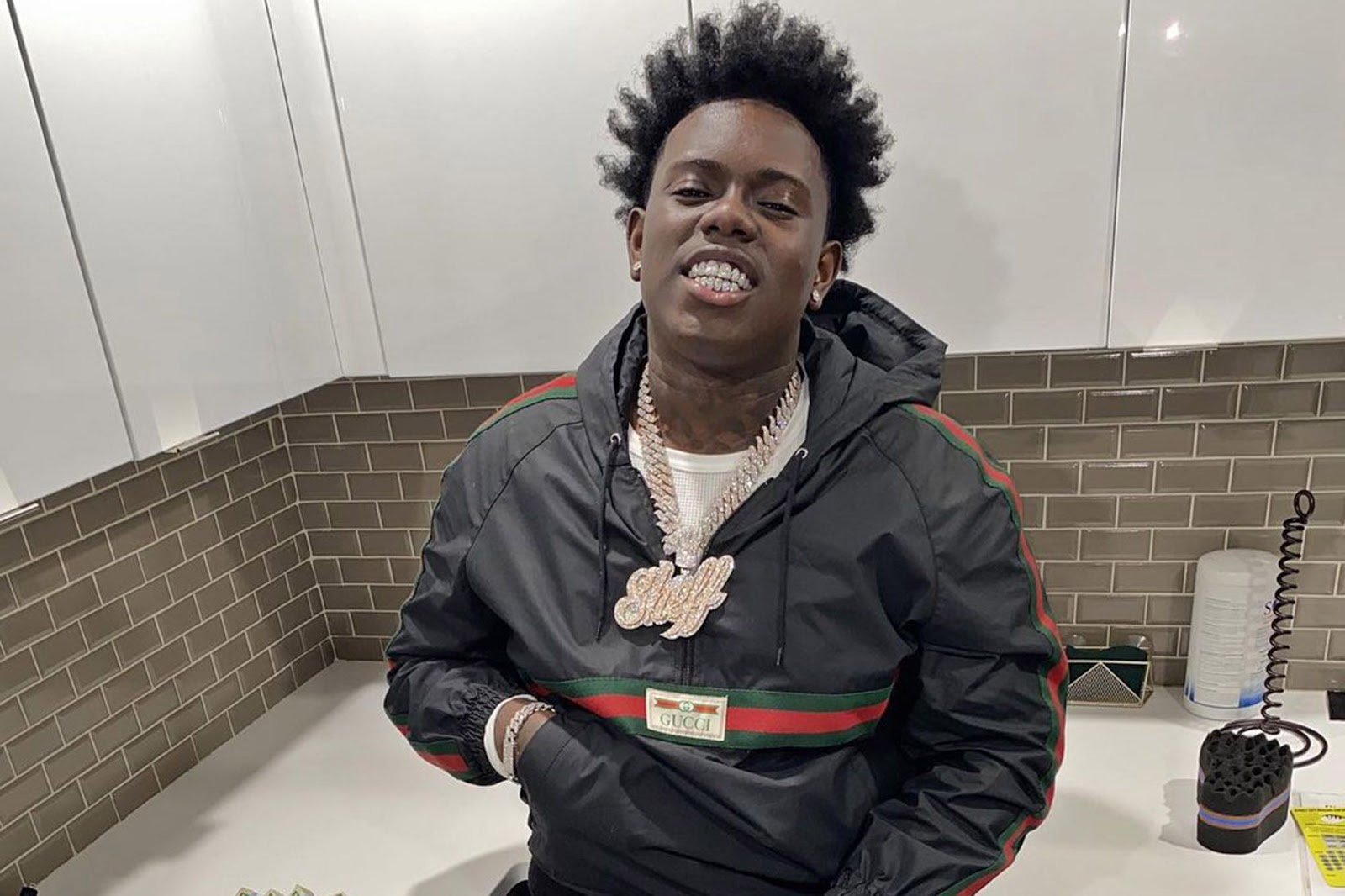 A gang-affiliated rapper and one of the pioneering leaders of the Brooklyn drill scene, Sheff G is a crucial voice in the new generation of hip hop, and he knows it. Between run-ins with violence growing up and constantly feuding with the NYPD, Sheff G uses his experiences to create lyrics and an atmosphere that both reflect his upbringing and the need for change in the United States.

Michael Williams, also known as Sheff G, was born on September 23, 1998, in Brooklyn, New York, to a father from Haiti and a mother from Trinidad.

Sheff G grew up in the Flatbush neighborhood of Brooklyn, where violence, poverty, and homelessness were all too familiar to him. At the age of 12, he joined the 83 Gangsta Crips and was arrested multiple times, guns and other substances passing through his hands all too often. He eventually dropped out of high school after his arrests starting stacking up.

One day, Sheff was told by his gang to jump a man called Tegan Chambers. When he confronted Tegan, they both saw a kindred spirit in each other and decided against fighting, becoming fast friends instead. Tegan Chambers soon became known as Sleepy Hallow, and the two have become an unforgettable duo in Brooklyn’s hip hop scene.

Although young and relatively new to the hip hop scene, Sheff G is not to be underestimated. With his mother’s name tattooed above his eyebrow and his upbringing held close to his heart, he reminds us about what life is like for so many kids brought up in violent neighborhoods and reflects his own pain and hardship in his lyrics. However, he also reminds us how he’s overcome such situations, coming out on top as an inspiration to others.

Ironically, Sheff G never planned to become famous or go into the music business. His first song, “No Suburban,” was made in 2017 as a response to 22Gz’s song “Suburban,” so as to further heighten the feud between them.

However, “No Suburban” went viral and became a big enough success to be re-recorded as a remix with Corey Finesse. The viral success made Sheff G’s life change overnight, making him the breadwinner of the family within weeks.

To capitalize on this newfound fame, Sheff G quickly released a mixtape Chase A Bag with “No Suburban” as the main feature. Soon, people started referring to him as one of the men who established Brooklyn drill music in the music industry. His success made him become a hero in the eyes of the people who grew up in similar situations to him, someone who could turn a bad hand in life around and make a profit from it.

Settling Into His Sound and Newfound Fame

Riding on this new hype for his music, Sheff G released a mixtape called The Unluccy Luccy Kid. The album uses a lot of the themes that permeate Brooklyn drill music: poverty, violence, and overcoming the shortcomings that life throws at the downtrodden.

He released three projects in 2020. The first, a mini-album called Just 4 Y’all. The second,  an album called One and Only, which hit 20th on the Billboard 200 and had a single, “No Suburban 2”, go viral on social media. Later in August, he, along with childhood friend Sleepy Hallow, signed a deal with RCA Music through Winners Circle Entertainment.

His third project of 2020 was another album called Proud of Me Now. It has 11 tracks, with the main standout song from the album called “Eeeny Meany Miny Moe.” The album continues to talk about his life on the streets, but now also talks about how he made himself into a successful businessman. As the album hits a more personal note with Sheff G, there are no features on it.

Music Style, Influences, and his Impact on the Brooklyn Drill Scene

A clear leader of the Brooklyn drill music scene, Sheff G has helped define the movement and yet continues to push to re-define it, expanding the understanding of what the movement is into what it can be.

American drill music originated in Chicago as trap music for gangs. The word drill, when used as slang, can mean kill in Chicago. Gangs would use the music to taunt other gangs or brag about their own (this can be seen in Brooklyn as well, notably with Sheff G’s first hit, “No Suburban,” as a response to 22Gz’s “Suburban”). Drill music reflects the palpable tension in daily life and calls for revolution, a call to make way for the young and the new.

Brooklyn drill music is a hybrid of trap music and the already existing drill sound in Chicago and the UK (the UK uses influences of garage and grime, with a more dazed bass line). More specifically, it draws from the style of Chicago’s trap, the UK’s beats, and the distinct Brooklyn accent.

However, Brooklyn drill music stands apart from the rest in that it’s thematically a lot darker and hostile, with dynamic, violent lyrics. This is especially noticeable when it is compared to New York drill music, which seems to be made exclusively for parties and clubs due to its catchy, upbeat, and sexy vibes.

So where does Sheff G come in? Well, Sheff G and 22Gz and their songs “No Suburban” and “Suburban” are credited for Brooklyn drill’s rise in popularity. They, and AXL Beats (a UK producer who worked on both viral tracks), have pushed Brooklyn drill forward and really established it in the hip hop scene.

From there, fellow rapper and friend Pop Smoke took Brooklyn drill and made it mainstream with songs such as “Dior” and “Welcome to the Party.” However, as Pop Smoke sadly died during a home robbery in February of 2020, Sheff G is again at the forefront of everyone’s mind when they think of the Brooklyn drill scene.

As a baritone with a distinct Brooklyn accent, Sheff G has often been mistaken to be a British rapper over the years. He thinks this could be in part to the UK-influenced beats he uses in his songs or that a deep voice with any kind of accent can be mistaken as a myriad of things.

Sheff G is known for having a hard, sharp tone with drill beats punctuating his songs and lyrics that are to the point, covering the issues he’s grown up with his whole life – violence and poverty being amongst the most prevalent themes. However, he also talks about how he’s overcome his background, and his recent raps have taken on a slightly more relaxed and emotional tone.

Sheff G has named a few of his musical influences over the years, namely Chief Keef, 50 Cent, G Herbo, and Notorious BIG. He listened to a lot of Chicago drill growing up, clearly influencing his future beats and lyrics.

Sheff G is notoriously private about his personal life. He doesn’t share much about his family, who he’s dating, or even if he’s dating. He’s had a few rumored girlfriends and even a rumored baby, and yet the public is still in the dark about Sheff G’s life outside of music. That is, everything except what information he uses for his lyrics and what’s on public record in the NYPD’s database.

Gang Life and Being Arrested

After being inducted into the Crips at the age of 12, Sheff G found himself embroiled in a life of violence, guns, and criminal activity. He was arrested for fighting, then for shooting a gun in a shopping center, then again for armed robbery in 2015, which led to more than a year’s sentence in jail.

Most recently, in 2021, Sheff G was arrested for reckless driving and possession of a loaded weapon. He was released after posting bail.

An Ongoing Feud with the Police

Sheff G has long been a very vocal critic of the NYPD.

As a man with a long criminal history, Sheff G has been branded as “dangerous” by the NYPD, and anywhere he’s advertised to appear publicly is met with resistance by them. In 2018, his music video shoot for “Panic Pt. 3” featuring Sleepy Hallow and Fresh G was shut down by the NYPD, resulting in Fresh G being temporarily locked up for unknown reasons.

Then, in 2019 he was one of five musicians that were removed from Rolling Loud’s October lineup after the NYPD claimed the artists could incite violence with their performances. A show in Long Island was also shut down by the NYPD for similar reasons. Most recently, in 2020, Sheff G performed at King’s Theater for BK Drop Fest, but the NYPD shut him down mid-set after his fans got on the stage.

As a result of his longstanding feud with the NYPD, Sheff G has advocated for more youth programs in inner cities. He claims that the violence and other issues he experienced growing up could’ve been avoided or negated if there had been interference. This interference could be anything from sports programs, to clubs, to school events – anything that provides access to better, more equal opportunities.

The unforgettable duo with the movie-like first meeting (almost being jumped by the other and, instead, becoming best friends), Sheff G and Sleepy Hallow show no signs of slowing down and every intention of moving forward in the business together.

Inspiring each other with new lyrics and beats, the two have done multiple collaborations and features with each other. These include Sheff G’s song “Eeny Meany Miny Moe” featuring Sleepy Hallow, the collaboration of “Tip Toe” where they sample from the song “Tiptoe Through the Tulips” by Tiny Tims, the collab “Head Tap” with Pressa, and their joint feature on the track “2020 Vision” by Dj Drewski.

In fact, Sleepy Hallow’s first-ever viral hit was with the song “Flows,” which featured Sheff G. Sheff G even helped assist Sleepy on his second album Sleepy for President. The two remain inseparable and thirsty to achieve more in the business.

As with many musicians during the time of Covid-19, Sheff G has announced very little about upcoming projects. This is likely in part due to the fact that scheduling anything right now has to be taken with a grain of salt, as nothing is set in stone while the virus still looms at large.

However, he is scheduled to appear at Rolling Loud 2021 in both Miami and Portugal. The dates are in May and July, respectively, so talk of cancellations because of Covid-19 may be a month or two away still.

Either way, he is still basking in the release of his latest album, Proud of Me Now, which has only been out for a few months. Although his fans are thirsty for more, they can still ride out the wave of his newest singles and wait a little longer.

Inside the NYPD’s War Against Drill Rap | Vice