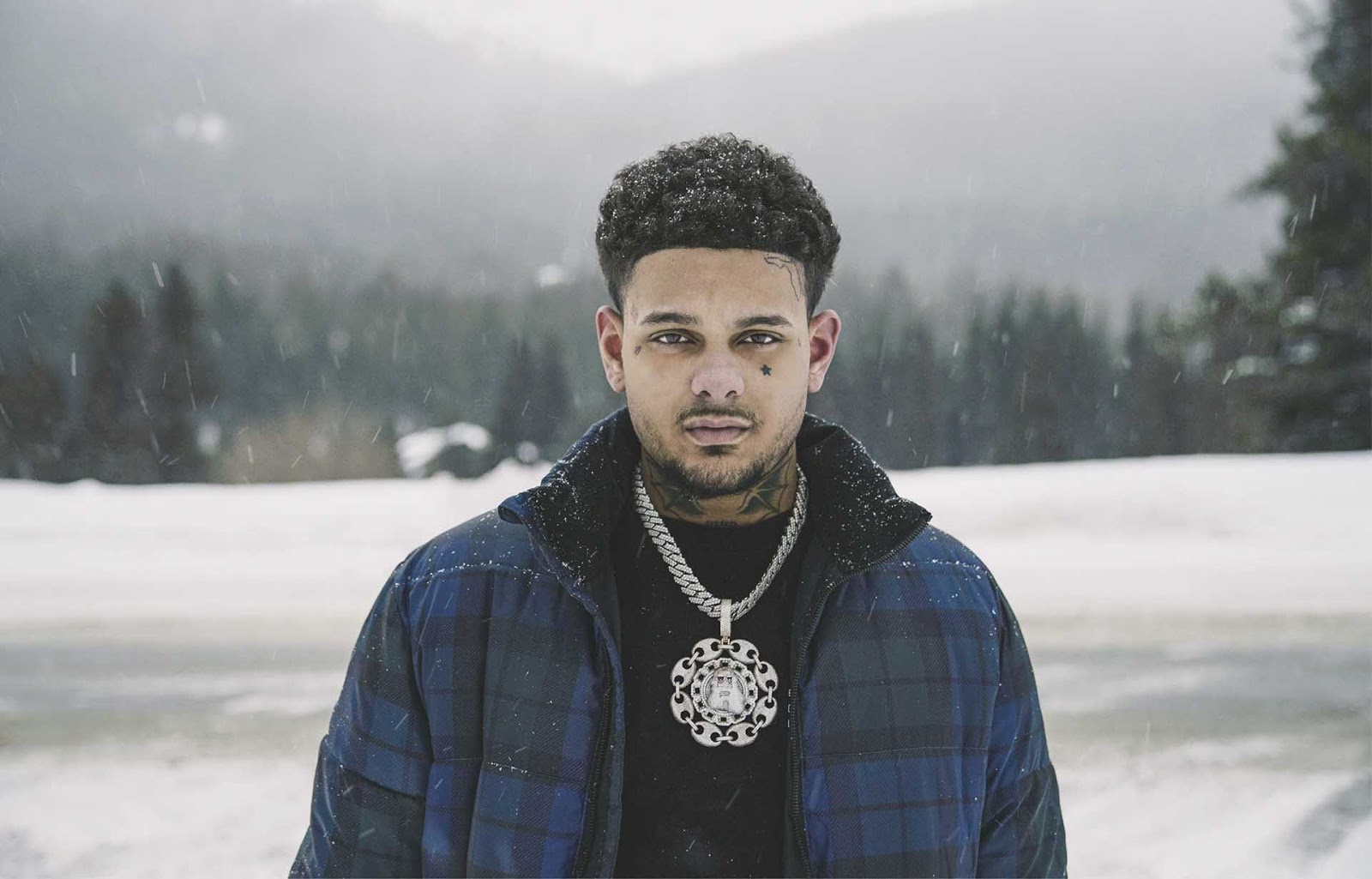 A rapper from South Florida with a dedicated fan base and more than a few critics, Smokepurpp is just happy to be along for the ride… and gain some riches along the way. With his childhood friend and fellow rapper Lil Pump by his side, he moved to LA to pursue the high life that comes with hip hop fame.

Omar Jeffrey Pineiro was born on May 15, 1997, in Chicago, Illinois. At the age of three, he and his family moved to Miami, Florida, where he met a young friend who would soon become a lifelong collaborator, Lil Pump.

He always liked music and liked the idea of getting rich off it. To this end, he started designing beats and other instrumentals. However, nobody bought his music. So, he used his music instead and began rapping to his own beats and uploading them to SoundCloud with Lil Pump. Together they would skip school and work on music, which led to two things. First, local fans and gained traction on Smokepurpp’s songs. The second, he dropped out of school to pursue what he hoped would be his career.

In later interviews, Smokepurpp claims that he was kicked out of a few schools before his last high school and that the last high school wanted to kick him out for a while because after he started getting SoundCloud famous, he became a distraction in class. As a result, he said he dropped out first before he could kick him out.

Smokepurpp also has a younger brother named Jaylier Pinero, who is following in his footsteps. A producer and rapper, Jaylier (or Jay), put beats on SoundCloud under the name YUNG BOO$T before adapting to the name DSC Sunny. Smokepurpp has spoken about how he wants to take his brother under his wing and make him the next big thing.

The Career of Smokepurpp

A young rapper with a fervent fan base, Smokepurpp has shown that if you have dedicated fans, you can get through anything. They’ll take you to the top by helping you go viral on social media, and they’ll carry you through the bottom when your album sales (more like, last two album sales) are less than satisfactory.

After gaining local fame with the tracks “Ski Mask,” “Sam$ung Jumping,” and “Live Off a Lick” featuring XXXTentacion and “It’s Nothin,” a collaboration with his cousin and fellow rapper Lil Ominous, Smokepurpp signed a joint record deal with Interscope Records and Alamo Records.

Soon after, he teased the release of a new mixtape that would be titled Deadstar. Before its reveal, he released two singles that would be included on the album later. The first, in May of 2017, was named “Audi.” This has been his most successful single to date, certified gold with millions of streams on multiple platforms. The second single, released a few months later in September, was called “Bless Yo Trap.”

The year 2019 was no less filled with content, but the hype around Smokepurpp seemed to lessen somewhat. He released a mini-album called EP Lost Planet and a full studio album, Deadstar. Both were received well by his fans but didn’t do as well in the music industry as a whole.

His luck (or lack thereof) continued in 2020. Whereas Covid-19 brought the United States into a lockdown and had more people looking at their phones and listening to music more than ever, it did nothing to help the sales of Smokepurpp’s 2020 album Florida Jit.

The album was released on June 19th and had all the makings to be a great album, with the well-known producer Ronny J and multiple guest features included, but sadly it couldn’t find a foothold in terms of streaming or actual sales. In fact, the album performed so poorly Smokepurpp took to social media to joke about his shortcomings with music lately.

Among the new rappers of the Gen Z SoundCloud generation, it can be hard to stand out. So how does Smokepurpp do it?

With no real defined music style in the rap genre other than being trap-ish, Smokepurpp is slowly having a hard time standing out from the crowd, in good ways, at least.

His lyrics aren’t unusual to rap but seem ingenuine. He talks about drugs (although he claims to be somewhat more anti-drug now), and he raps about poverty and violence in poor neighborhoods, but mainly he seems to rap about being rich, having expensive cars, living it up, and having sex with pretty women.

In terms of his voice, it isn’t a standout voice amongst SoundCloud rappers, but his newfound popularity has caused him to start to have vocal strain. He comments that constantly touring is giving him a hard time with his voice, and he’s started to take mini-breaks in between to help.

Smokepurpp’s impact on rap has always been called into question. He gets accused of making rap look negative in the public eye, something that shouldn’t be popular or influential. Rappers accuse him of using rap music as a marketing tool for fame and fortune rather than for the love of the music itself.

Just this last year in 2020, one of Smokepurpp’s freestyle raps went viral for how bad it was, continuously offbeat and with weak lyrics. Rappers, critics, and fans alike made fun of him for it. Smokepurpp has since blamed the blunder on the weed he was smoking, ironic, in that he’s been trying to promote himself as someone who’s become more anti-drug.

Smokepurpp’s image is mainly clouded in controversy, with his ego standing front and center.

He’s someone who likes his new fame and likes to talk about it. In an interview, he says that he doesn’t want people to know where he lives, but then later says he just moved to Calabasas next to a lot of famous neighbors and is only a short drive away from Lil Pump. He’s interested in fashion, but only to an extent, as he buys clothes seemingly exclusively from his stylists because he trusts them to make him look expensive.

After a move to Los Angeles, Smokepurpp finally got the lifestyle he had always dreamed about – extreme opulence. He describes himself as someone who likes weed and partying and is not shy about posting about them on social media. However, is there any more to the rapper than what he portrays on social media?

Smokepurpp, as his stage name might reflect, has a long history with drugs and addiction.

As someone who was diagnosed with an extreme anxiety disorder at a young age, Smokepurpp was prescribed Xanax for most of his life. Unfortunately, he became reliant on it and even began dealing it to others in Florida’s young rap scene.

However, after his friend and fellow rapper Lil Peep died at the age of 21 due to an accidental overdose, Smokepurpp realized he needed to change. He had stopped taking Xanax, but had started taking Oxytocin and Percocets and was spiraling down a dark hole where he didn’t care about anything, including his music. But after Lil Peep’s death, he cut it all out at once and reportedly now only smokes weed.

Although he has stopped taking drugs (other than weed), he still says that he will talk about it and substance abuse in his lyrics, as it will always remain a large part of who he was and who he’s becoming. Such lyrics are easier to write now, as his head remains just a bit clearer than before.

Although Smokepurpp’s lyrics often refer to women and what he likes to do to them or have them do to him, he’s only been in one confirmed “official” relationship. This was in 2020 with singer Noah Cyrus, sister of Miley Cyrus and daughter of Billy Ray Cyrus. The romance blew up on social media but reportedly only lasted a few months.

In terms of other romantic relationships, Smokepurpp says that he has girls around, but he never goes official because he either gets his heart broken or the girl in question starts acting like his fan, which is a turn-off for him. In general, he says nothing lasts because he likes to switch it up anyways. In an interview where he got into specifics, he said he wouldn’t care if a girl had tattoos, even face tattoos, but she shouldn’t have been around a lot of other guys and shouldn’t be a “hood” girl.

As mentioned, Smokepurpp is often criticized for giving the new generation of rappers and SoundCloud rappers a bad name. Instead of focusing on the music and what he wants his music to mean to others, Smokepurpp seems more focused on the lifestyle that viral fame can give him.

One such rapper, Russ, goes into detail about how he thinks Smokepurpp sees rap only as a marketing tool for fame, not as an art form. He even claims to have beaten up Smokepurpp once, something that hasn’t been proven yet.

Russ took to Twitter to vent about his frustration with Smokepurpp’s stance on drug use after Lil Peep died, claiming that Smokepurpp was part of the original problem, glorifying drug use among rappers for years. Smokepurpp responded that Russ was using Lil Pump’s death as a platform to gain more followers, and yet soon after, he and Lil Pump decided to join the anti-drug movement. Even so, a few months later, the public saw Smokepurpp back on weed and clearly showing he was enjoying it.

Additionally, although he has a rabid fan base that consists of a lot of women, Smokepurpp still continuously talks down to women, calling them either girls or bitches. He seems to think of them as mainly interchangeable, and in an interview, he even asked girls to send him videos on social media of dirty things they did to his cardboard cut out.

Similar to other rappers during our new Covid-19 world, Smokepurpp has many projects and other content on pause. Touring, in particular, had to be paused in 2020, which was especially hard for Smokepurpp, who has said that he had planned for his tour to be huge. However, there seems to be some hope that it could restart again in 2021.

Smokepurpp Video Interview: Get To Know The Rapper | Billboard