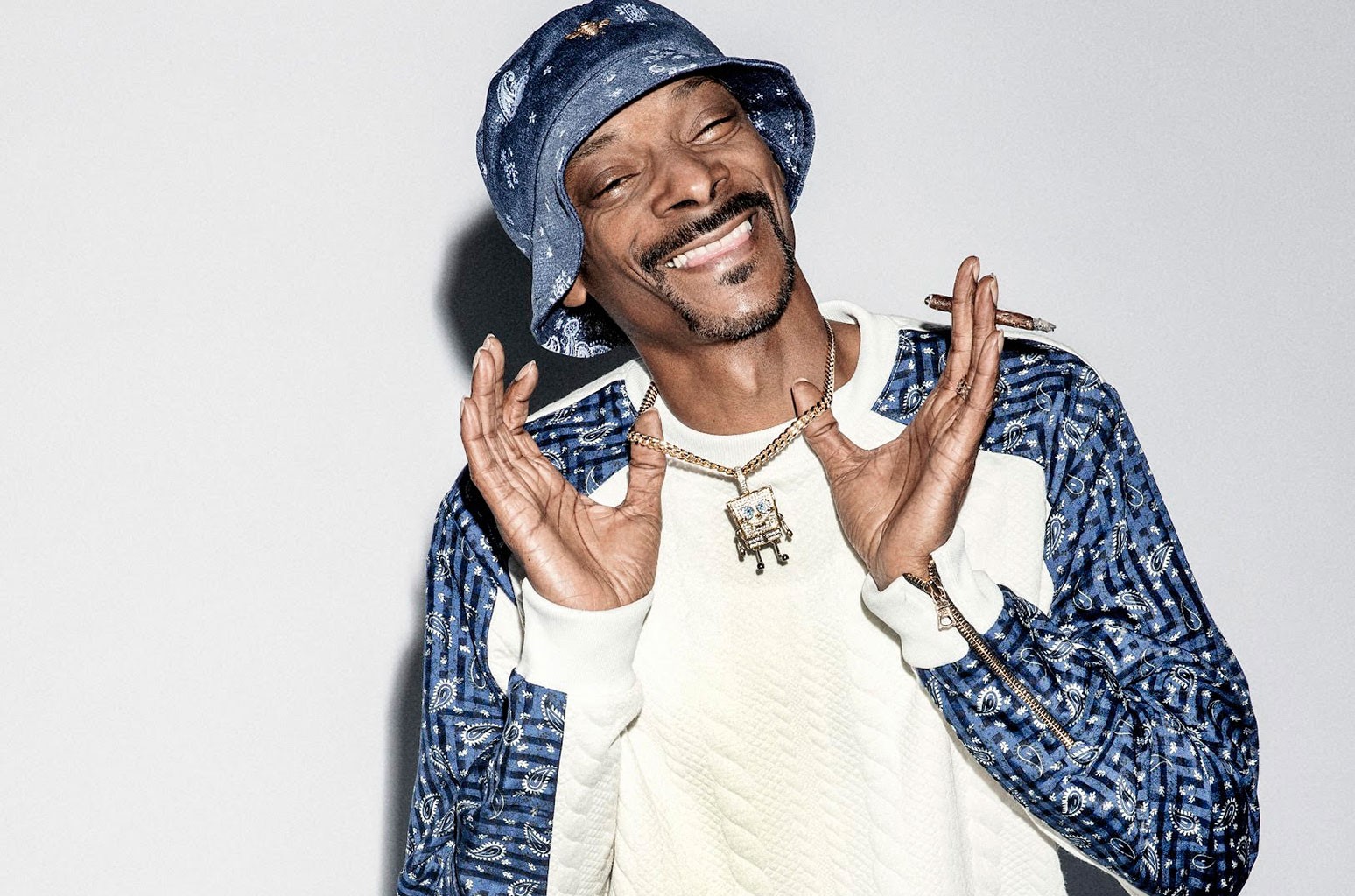 When Calvin Cordozar Broadus Jr. was born on October 20, 1971, a star was born by the stage name of Snoop Dogg as well as Snoop Doggy Dogg and Snoop Lion at some points of his career. This rapper, singer, songwriter, producer, media personality, entrepreneur, and actor began in 1992 when a super producer from N.W.A., Dr. Dre, discovered his silky voice mixed with street chronicle raps.

Snoop Dogg was featured on Dr. Dre’s song, “Deep Cover,” and on Dre’s classic debut album as a solo entity, The Chronic. How many albums is Snoop responsible for selling? The answer is over 23 million albums in the United States and 35 million albums worldwide. But his story doesn’t begin and end there. Get ready for the road to how Snoop Dogg became an icon.

Young Snoop was born in Long Beach, California, to Vernall Varnado, a Vietnam War veteran, singer, and mail carrier left the family three months after Calvin’s birth, and Beverly Broadus Vernall, a singer, mail carrier, and Vietnam veteran who left the family only three months after Calvin’s birth. This is the reason why Snoop carries his stepfather’s name, Calvin Cordozar Broadus Sr. But the Snoopy reference to his stage name came from his parents nicknaming him “Snoopy” due to his fondness and similarities to the cartoon character from Peanuts.

He started off singing and playing piano at the Golgotha Trinity Baptist Church, then rapping came along in the sixth grade. As a pre-Snoop Dogg child, Calvin sold candy, delivered newspapers, and bagged groceries to help his family out economically, and still remained a dedicated student and churchgoer. Unfortunately, his mother’s efforts to keep him singing in the choir and playing football weren’t able to save him from gang banging in his teenage years.

Snoop Dogg, as a teenager, ran into trouble as a member of the Rollin’ 20s Crips gang in the Eastside section of Long Beach, California. Not long after graduating from high school, Snoop was unfortunately arrested for cocaine and was frequently incarcerated. But hip hop came as a saving grace, with his cousins Nate Dogg and Lil’ ½ Dead along with friend Warren G, Snoop began recording homemade songs as a group called 213 after the area code for Long Beach.

One of Snoop’s solo freestyles over “Hold On” by En Vogue made its way to Dr. Dre, prompting the legendary producer to give Snoop an audition, and former N.W.A-affiliate, The D.O.C., assisted the young Snoop Doggy Dogg in learning how to structure his lyrics and separate them into verses, hooks, and choruses.

Snoop Dogg‘s second album, Tha Doggfather came out in November 1996, and what was occurring all around him was the gangsta lifestyle of Death Row Records grew more and more obvious in the media, with labelmate Tupac Shakur’s death, and the growing music industry fear of Death Row co-founder Suge Knight. Dr. Dre had left Death Row altogether, getting away from the drama even though he was a co-founder of Death Row Records as well.

Snoop Dogg still has a heart filled with love that wasn’t totally frozen by the cold streets. Snoop got married to his high school sweetheart, Shante Taylor, on June 12, 1997. The couple would file for a divorce on May 21, 2004, citing irreconcilable differences. But they managed to renew their wedding vows on January 12, 2008. Their family blossomed to include three children: their son Cordé (born August 21, 1994), another son Cordell (born February 21, 1997), who stopped playing football to pursue a career as a filmmaker, and their daughter Cori (born June 22, 1999).

Even after parting ways with Death Row Records, Snoop Dogg was always able to stay situated with a deal on the table. He signed with Master P’s No Limit Records, distributed by Priority/EMI Record, in March of 1998 and kicked things off on the label with Da Game Is to Be Sold, Not to Be Told. Other Snoop Dogg albums on No Limit included No Limit Top Dogg in 1999 (over 1,510,000 copies sold) and Tha Last Meal in 2000 (over 2,100,000 sold). Also, a year before in 1999, his autobiography, Tha Doggfather, was published, telling his life story for fans and curious observes to read.

Back in 2002, Snoop released the new album Paid tha Cost to Be da Bo$$, on Priority/Capitol/EMI, selling over 1,310,000 copies, featuring the hit singles “From tha Chuuuch to da Palace” and “Beautiful,” featuring guest vocals by super-producer of The Neptunes – Pharrell Williams.

For his next record deal, Snoop signed to Geffen Records/Star Trak Entertainment, both distributed by Interscope Records, with Star Trak being headed by producer duo The Neptunes that consisted of Pharrell Williams and Chad Hugo. “Drop It Like It’s Hot” featuring Pharrell was the first single released from the album and became Snoop Dogg’s absolute first single to reach number one. His entire album sold 1,730,000 copies in the U.S., and Snoop Dogg expanded his exposure by joining Warren G and Nate Dogg to form the group 213, releasing The Hard Way in 2004.

In 2009 Snoop Dogg claimed to be a member of the Nation of Islam, and in 2012, he converted to the Rastafari movement, pushing his music in a reggae direction and switched up his name to Snoop Lion after going on a trip to Jamaica. Snoop Lion, as he was now called, released a reggae album, Reincarnated, saying: “I have always said I was Bob Marley reincarnated.”

“La La La” was a big song released under his Snoop Lion name. Other songs from the Snoop Lion’s den included, “No Guns Allowed,” “Ashtrays and Heartbreaks,” and “Harder Times.” Snoop Lion’s marijuana smoking was definitely not a branding stunt. Snoop was banned from entering Norway for two years in July 2012 when he tried to come into the country the month before with a total of 8 grams of marijuana and an undeclared 227,000 kr in cash, which is equivalent to approximately $24,900 in United States currency as of August 2018.

Reincarnated was also the name of the documentary film about his Jamaican experience that came out in 2013. Snoop Lion would prove to be a short-lived conversion, with his 13th studio album, Bush released in May 2015, marked a return of the Snoop Dogg name. Snoop, the Rastafari member, would also prove to be temporary as well, with Snoop announcing that he was “a born-again Christian” and releasing yet another new genre of Snoop music, his first gospel album, Bible of Love.

On November 19, 2018, Snoop Dogg was celebrated with his own star on the Hollywood Walk of Fame, and he would release his seventeenth solo album, I Wanna Thank Me, in 2019. Throughout his career, he has collaborated with a number of different lyricists including Ice Cube, Eminem, Jay-Z and Beyonce, Wiz Khalifa, LL Cool J, Bow Wow, Rakim, Big Daddy Kane, Diddy, Daz Dillinger, DMX, Kurupt, KRS One, and more.

In January 2013, Snoop Lion received swift criticism from authentic members of the Rastafarian community in Jamaica, including reggae artist Bunny Wailer. This controversy stemmed from Snoop’s alleged failure to meet his commitments to the culture. Snoop Lion would roar back, dismissing later the claims and stating that his beliefs were personal and not up for outside judgment. Bunny Wailer is credited as being the one who gave Snoop the name “Lion.”

It is interesting to see this spiritual phase of Snoop Dogg’s life, as he shifted between the Christianity that he was raised with, his dappling in the Nation of Island in the late 2000s, and how he shifted a few more times in the early 2010s, bouncing between Rastafari and back to Christianity again. There are people that may view this as a lack of focus and loyalty to one religious sect in particular. But from another point of view, it shows Snoop Dogg as a hands-on searching of truth, spiritual fulfillment, and a strong bond with God.

Instead of just reading about these different belief systems, Snoop felt the next to get involved directly and check them out himself without relying on second-hand explanations. This shows a man looking to come to terms with the hard times he experienced, the violence that was all around him, and an ability to embrace love as a guiding force for higher understanding.

Cordell made the commitment and signed a letter of intent to play for UCLA on February 4, 2015, but months later had a change of heart on August 14, 2015, leading to UCLA announcing that Cordell had left the UCLA football team “to pursue other passions in his life.”

In October 2015, Snoop Dogg continued his journey from the entrepreneur angle launching a new digital media business, Merry Jane, that emphasizes the delivery of news about marijuana, or in Snoop’s own words:

Snoop Dogg announced his new brand of cannabis products, Leafs By Snoop, in November 2015, with his line of branded products, including marijuana flowers, concentrates, and edibles. Snoop stated:

“Leafs By Snoop is truly the first mainstream cannabis brand in the world and proud to be a pioneer,” Snoop Dogg said. “LBS is blazing a trail for the industry.”

This showed once again that Snoop Dogg was never afraid to be at the forefront of innovation or new frontiers being that he became the first major celebrity to brand and market a line of legal marijuana products.

Snoop also works with city officials to annually give away turkeys to the less fortunate in Inglewood, California, at Thanksgiving, with 3000 turkeys given out in 2016. Philanthropy is something the many people don’t realize is close to Snoop Dogg’s heart, being that it is easy to get fixated on his witty sense of humor, his effortless rap delivery with an unending supply of hit songs, or the distraction of the cloud of smoke that he may casually exhale at any given the time of day.

Whether you called him Calvin Cordozar Broadus Jr., Snoopy, Snoop Doggy Dogg, Snoop Dogg, Tha Doggfather, Snoop Lion, Coach Snoop, or just plain old Snoop, he has remained a man of many income sources since entering the music game in 1992. Now that he is getting closer to his 30-year anniversary of success, it is amazing to see how many sides of his personality, his lived experience, and his personal taste that he has been able to reflect in his music.

Snoop gave us the inside scoop on what it is like to be in a Crip gang neighborhood, the street politics of sex workers and pimps, the family man that coaches his son’s football team, the cannabis spokesman before it was even legalized where he lived, the tourist birds-eye-view of Jamaican Rastafari culture, and enough music to never have to play the same Snoop Dogg song for weeks.