The Chainsmokers: The Full Profile 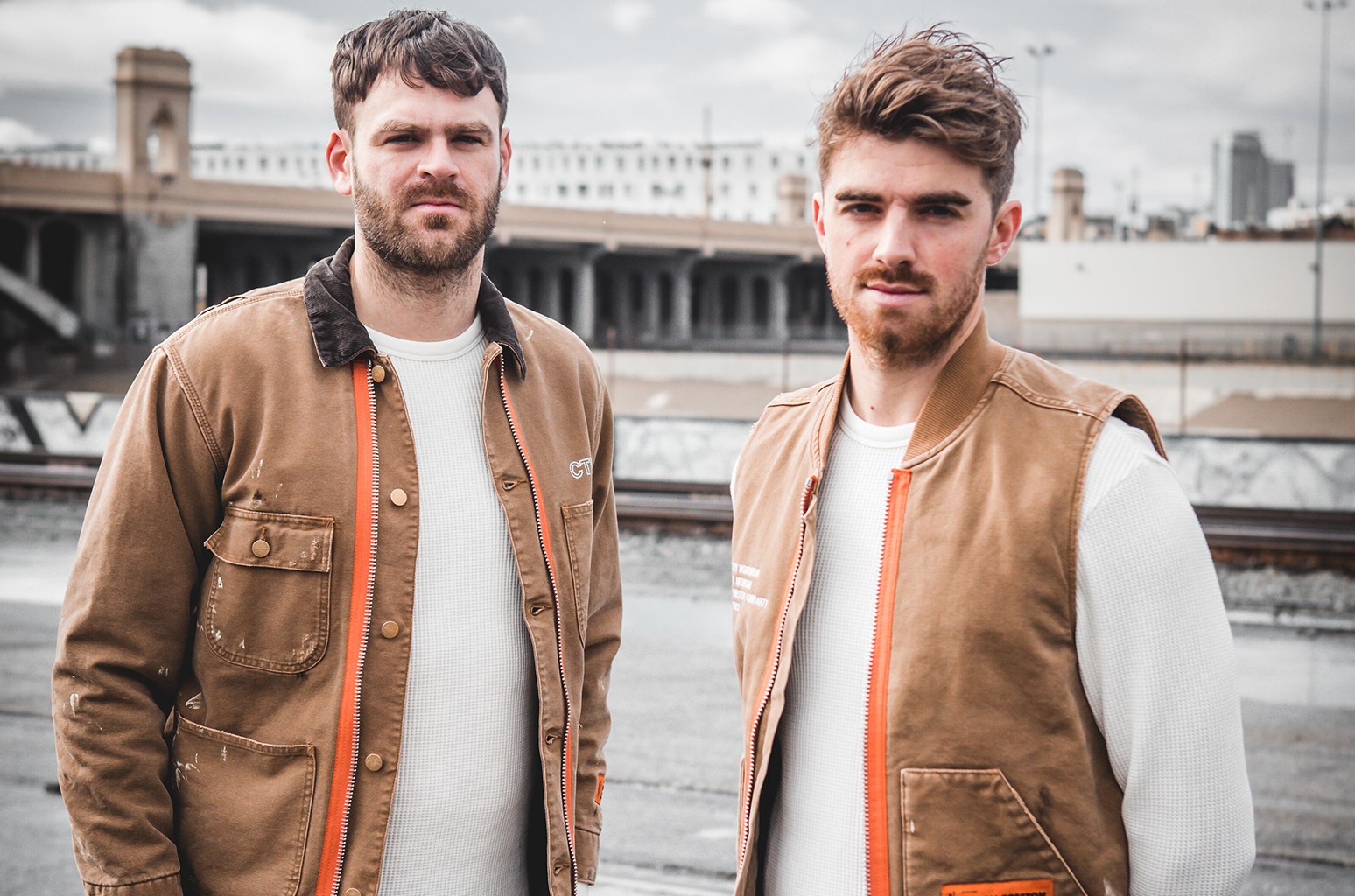 If you aren’t completely clear on who The Chainsmokers are, the gist of it is that they are a celebrated electronic dance music DJ duo that makes time to produce and sing their own music and tour like crazy. The group members include just two gentlemen, Alexander “Alex” Pall and Andrew “Drew” Taggart, who have managed to win a Grammy award, two American Music Awards, seven Billboard Music Awards, and nine iHeartRadio Music Awards.

Just how much did Alex Pall and Andrew Taggart take in? How about $46M, with their international touring and lucrative residency deal with Wynn Nightlife in Las Vegas. That is a fantastic life situation, but how exactly did these two guys become The Chainsmokers, and creators of some blockbuster beats and songs to rock the mainstream radio waves over the last five years?

From College to The Chainsmokers

Drew Taggart, the younger member of The Chainsmokers, wasn’t exactly a founding part of their formation. His buddy Alex Pall was, and he had parted ways from the formerly involved DJ Rhett Bixler.

The current lineup came together as the EDM DJ duo The Chainsmokers that we all know of now back in 2012 under the management of Adam Alpert in New York City, where Alex Pall was attending New York University for art history and music business.

With Drew Taggart being from Portland, Maine, and attending Syracuse University and being an intern at Interscope Records prior to meeting Alex, how did the musical bromance begin?

Taggart was psyched up to be a DJ, releasing original songs on the SoundCloud online platform. Taggart was informed by someone working for his future manager Adam Alpert that a duo had an open slot for him after discovering Taggart’s music online.

Before you know it, there was Drew, leaving Maine and heading down to New York City. Alex Pall had grown up as a DJ and split his time working at an art gallery in Chelsea, Manhattan at the time. To get to the point, they got along fabulously and Drew wound up staying in NYC.

They began their production work by crafting remixes of indie bands that they were interested in. In 2012, they worked with musical artist and actress Priyanka Chopra on the single “Erase,” which was followed by “The Rookie” in early 2013. April 2013 marked the calendar for when The Chainsmokers released a remix of “Medicine” by Daughter, and it broke into the number 1 spot on HypeMachine.

The Chainsmokers had what Alex Pall describes as a “life-changing” song even if it doesn’t really represent where the group is at today, and that is their viral joint called “#Selfie” released for free in December 2013 then picked up by Dim Mak Records who re-released it in January 2014 and eventually #Selfie made its way over to an even bigger label platform,  Republic Records. The single charted internationally, and on August 5, 2014, they released another pop culture moment, their cheeky song “Kanye,” featuring sirenXX, and seven months later, they released “Let You Go,” featuring synthpop sensations, Great Good Fine Ok. Now it was time to level up. Alex and Drew signed with Disruptor Records, a joint venture label between Sony Music Entertainment and their day-one manager Adam Alpert.

They geared up in 2015 to release their first EP entitled Bouquet full of original music that wasn’t a collection of remixes either. After releasing the first single “Good Intentions” on May 18, 2015, they released what would be their biggest commercial banger to date, “Roses” featuring singer Rozes, on June 16.”Roses,” going multiplatinum in several countries, including at home in the United States. Drew Taggart explained to Billboard the songwriting process for “Roses”:

“We wrote and produced the entire track in about 8 hours. It’s cool how quickly and sloppy some of the pieces are to this song.”

There was no fat to trim on Bouquet. It was just five robust sonic flowers, with nothing wilting away – all five songs were separately released as singles. The Chainsmokers were beginning to develop their own sound, and Alex Pall talked to Harper Bazaar about what that entailed:

“We didn’t want to just take pop songs and make them EDM, that was not interesting to us, it didn’t come naturally to us. We liked picking indie songs, adding this cool dance side to it that also felt organic and natural with the song.”

The year of 2016 would be a time of bigger and bigger singles for The Chainsmokers with their next EP called Collage, which followed the same five solid singles format of Bouquet. On February 5, 2016, they dropped a huge one with “Don’t Let Me Down,” featuring vocals from Daya, which went on to take home a Grammy Award for the group.

Wasting no time, they released the single “Inside Out,” featuring the Swedish singer Charlee. But then there was that special day for the boys, July 29, 2016, when they gave the world “Closer,” featuring singer Halsey. How big did this one get? How about 12 times platinum. “Closer.” had got them even closer to the top of the pop world.

In 2017, it would be the year that The Chainsmokers would skip the EP format for a minute, and do the deep dive into their first full-length album called Memories… Do Not Open, which was released on January 3, 2017, announced an exclusive three-year residency deal with Wynn Nightlife in Las Vegas. This agreement would have them performing exclusively in Wynn-owned nightclubs XS Las Vegas and Encore Beach Club until the year 2019, which the group was thrilled about.

On Valentine’s Day of 2017, The Chainsmokers’ made an amazing announcement; their debut album would be called Memories…Do Not Open and would be available on April 7, 2017. Their next single was with Coldplay. You probably heard of it… “Something Just Like This” was released in February 2017 and was a monster, smashing the record for the number of views of a lyric video in one day with 9 million plays.

January 17, 2018, was the date that they released their single, entitled “Sick Boy,” setting off their monthly single strategy of fiving the album out to listeners only one song at a time per month until

December 14, 2018, when the whole project arrived. Sick Boy would be the album where Drew Taggart would step up to the microphone on a regular basis and sing the songs.

The duo also didn’t keep their fans waiting for new music in 2019 either, releasing “Who Do You, Love,” with some collaboration from Australian band 5 Seconds of Summer, and it came out on February 7, 2019. The lyric video was available for listeners on the same day on YouTube. The song was certified 2× platinum in Canada and platinum in the US.

“Who Do You Love” would mark the beginning of The Chainsmokers’ third album, World War Joy, using a similar music release strategy at Sick Boy. Instead of dropping the album on one day with all the songs all together in it, they build it up one song each month, skipping the months of May and June (maybe because their younger audience is studying for final exams or preparing for graduation during those times), until all ten songs arrive in December, completing the tracklisting.

This is how it was done during the 2018 months of January, February, March, April, July, August, September, October, November, and December for their second album Sick Boy. But for World War Joy, the started their one-single-a-month strategy in February, then continued in March, April, May, (skipped June), July, (skipped August-September-October), resumed with a new single in November, then on December 6 of 2019, they unloaded the last four songs to finalize the tracklisting for World Wide Joy.

They embarked on a 41-city North American arena tour through the United States and Canada with Australian band 5 Seconds of Summer and Nashville star Lennon Stella, taking place between September 25, 2019, through December 6, 2019 – the day that their full album for World War Joy finally came out.

The singles from World War Joy and when these were released consist of:

The Chainsmokers are going to make a move deeper into television and film with their production company Kick The Habit Productions in partnership with their manager Adam Alpert, who is the CEO and Dan Marcus, a former digital media agent, who is serving as the COO and president. The Chainsmokers have stated to the press:

“The age of being only a musician is over, and we’re excited to go all-in on this venture to curate, produce, and create meaningful projects.”

On November 25, 2019, The Chainsmokers announced that they are making a TV drama for the Disney-owned cable channel Freeform called Demo, whose main character has been described in the promotion as being a musician in her 20s “who dares to leave behind her struggling indie rock band and working-class family” in order to move to the big entertainment city of Los Angeles to try and wrote pop songs. As an up-and-coming artist, she will have to learn how to accept her past and incorporate it into her music to better her future.

Alex Pall and Drew Taggart are set to executive produce the show through their Kick The Habit company and are working alongside writer Joy Gregory. The Chainsmokers also have an upcoming feature film version of their massive hit song “Paris.”

One thing that has remained exciting about watching The Chainsmokers grow in the industry is how they have built solid relationships with many of their collaborators, and have continued to work together extensively as the stakes get higher and the levels get bigger.

For instance, their manager Adam Alpert who was there before Drew Taggart joined Alex Pall in The Chainsmokers and after continues to be right there, running the label they are on called Disruptor, and creating new opportunities for the band to expand.

There is also singer/songwriter Emily Warren who is an acquaintance that they have been friends with back in New York City when they were getting started. She has been involved in multiple songs for The Chainsmokers, such as “Side Effects,” Until You Were Gone,” “My Type,” “Don’t Say,” and “Wake Up Alone” to name a few. The band has even built a rapport with touring musicians along the way. The trust and creativity that emerges when you have a consistent crew of people in your life is proven time and time again as the career of The Chainsmokers progresses.

The Chainsmokers have recently been embroiled in a controversy surrounding the COVID-19 pandemic. In fact, the New York Department of Health and Health Commissioner Howard Zucker have opened an investigation into the Chainsmokers concert held in the town of Southampton, New York, on July 25. The concert was a part of the Safe & Sound drive-in mini-festival — but the attendees were seen leaving their cars and not social distancing. The Governor of New York, Andrew Cuomo, has expressed concern about the event being an obvious public health threat and violating Coronavirus restrictions in the state. While it doesn’t look like it was necessarily the band’s fault since the event was organized and approved by the town supervisor, Jay Schneiderman, it’s definitely bad press during such a trying time.