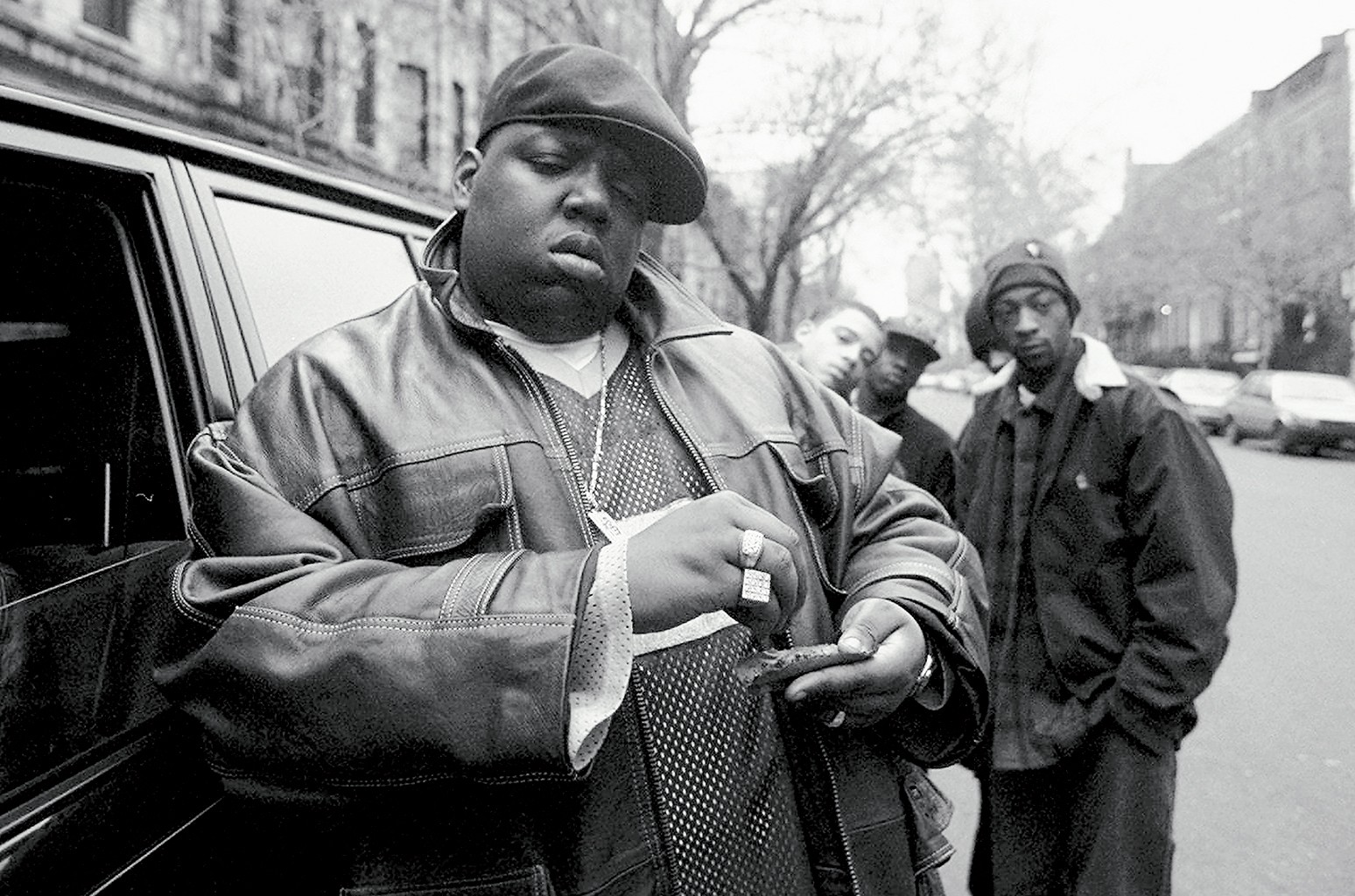 The world of hip-hop is filled with artists who desperately want you to know that they’re legends. In actuality, very few are. But it would be impossible to call the Notorious B.I.G. anything other than a legend.

His rhymes would come to define the 90s East Coast hip-hop scene, and his beef with Tupac would transform a musical rivalry into a schism that would become internationally known. Today, kids who have never even heard a line from Biggie wear shirts with his face on them, and Biggie murals occupy the walls of major cities from throughout the world.

Even if you’ve never heard of him, there’s a major chance that he’s had some influence on your life. But Biggie wasn’t born with the promise of success, and the circumstances that led to his success are fascinating in their own right.

Christopher George Latore Wallace was born May 21, 1972, in Brooklyn, New York City at St. Mary’s Hospital to Jamaican parents who had recently just immigrated to the United States from Jamaica.

His mother Voletta was a preschool teacher and his father Selwyn George Latore dabbled in politics but ultimately became a professional welder. When Wallace was just two-years-old, he decided to leave the family leaving Voletta completely in charge. To support the family Voletta had to work two jobs in order to make ends meet and feed her kids.

However she states that she tried her best to give her son a great life. She told Cheo Hadari Coker, who is the co-writer for the screenplay of the movie “Notorious” “My son wasn’t the pauperized kid he made himself out to be.”

Run-Ins With the Law

After a failed attempt at his first high school, Wallace requested a transfer to George Westinghouse Career and Technical Education High School in Downtown Brooklyn where DMX, Busta Rhymes and Jay Z also attended at the time before they were famous. According to his mother, Wallace did well in school until he decided to drop out and pursue criminal activity in order to make ends meet.

That criminal activity included getting arrested on a weapons charge in 1989 in Brooklyn. He was also arrested in 1990 for violating his probation. Eventually he got arrested for dealing drugs which included crack cocaine. Due to the dealing charge, the rapper experienced his first jail stint.

When Wallace was released from jail, he made his first demo tape “Microphone Murderer” and called himself at the time Wallace.

He decided on that name to mock his obesity and give tribute to Calvin Lockhart’s character in the movie “Let’s Do It Again.” Considering the fact that Wallace didn’t want to pursue music seriously, what came next was a huge shock. A local DJ in Brooklyn discovered his mix tape and an editor at The Source magazine heard it.

In 1992, The Source wrote a column entitled “Unsigned Hype” and mentioned the mixtape which caught the attention of A&R representative Sean “Puffy” Combs who had was still with Uptown Records at the time. Right after signing Biggie, Combs got fired from his position and week later bought what is now Bad Boy Records and Biggie was his first artist he signed.

Wallace became a father on August 8, 1993 after his girlfriend gave birth to their first child. Considering that he was a high school dropout, Wallace decided to make a promise and give his daughter everything.

He believed that his daughter deserved more than he did so she would be inspired to succeed in life instead of dropping out of school like he did. While he continued to deal drugs, his music career began to gain some traction. He was featured on a Mary J. Blige track entitled ‘Real Love” that saw commercial success.

Wallace decided that he should change his rap name from Biggie Smalls considering it had already been taken at the time to the Notorious B.I.G. That year Wallace released his track “Party and Bullshit” that was featured on the “Who’s the Man” Soundtrack. In 1994, Wallace was featured on the Craig Mack’s remix of “Flava In Ya ear” that soared to the top of the charts and landed on number 9.

In August of 1994, Wallace married fellow rapper Faith Evans five days before the release of his songs “Juicy” and “Unbelievable” which had its debut on the charts at no; 27. Wallace met his wife while they were subjects of a photoshoot at Bad Boy Records.

His debut album “Ready to Die” was released September 13,1994. Eventually the album reached number 13 on the Billboard charts. His song “Big Poppa” reached number 1 on the rap charts that year in the United States.

During the time of his first album release, Wallace met and became friends with fellow rapper Tupac Shakur. Shakur and Wallace became really close friends during that time with Wallace spending quite a bit of time at Shakur’s residence.

Shakur wasn’t Wallace’s only famous friend at the time. It has been noted that he also spent a lot of time with basketball legend Shaquille O’Neal after O’Neal listened to his song “Gimme the Loot.” O’Neal even requested that he work on a song with Wallace and that lead to the recording of “Can’t Stop the Reign.”

In 1995, the rapper formed a group called Junior M.A.F.I.A and they released their debut album, Conspiracy later that year. This group consisted of the rapper’s famous friends, Lil Kim and Lil Cease who both went on to see singular fame on their own.

The record saw some success with singles “Party Anthem” and “Get Money” which resulted in it going gold. During that same year, Wallace got involved in the infamous West Coast vs. East Coast hip hop rivalry. This resulted in Shakur completely distancing himself from Wallace and they then started a feud that resulted in not only drama, a stint in jail and death.

While serving a sentence in the Clinton Correctional Facility, Shakur accused Uptown Records affiliates of having knowledge to a robbery that caused the rapper to get shot up to five times that added fuel to the fire of this rivilary.

Working on a Second Album

While recording his second album, in 1995 Wallace suffered an injury as a result of a highly publicized hip hop disupte. Later that year, he collaborated with Michael Jackson on his album HIStory.

Wallace started that Jackson made him very uncomfortable and said at the time that he wouldn’t trust Jackson with his kids. In the spring of 1996, Wallace was arrested for chasing two fans and threatening to kill them after they begged for an autograph.

In June of 1996, Shakur released his first diss track entitled “Hit ‘Em Up” where he claimed to have had sex with Wallace’s wife Faith Evans. In response to the track, Wallace decided not to respond citing in a magazine view that responding is “not his style.”

In September of 1996, Shakur was shot outside a Las Vegas nightclub and died in the hospital six days later. For years, there were rumors going around that Wallace was involved in the murder. Reports have surfaced that Tupac was probably killed by a Compton gang and that Wallace was the one that bought the gun. According to Wallace’s family, the denied the rapper’s involvement in the murder of Tupac Shakur.

Wallace’s wife Faith Evans recalled the night that Tupac was killed changed his life. She states that he was crying and afraid that he may be next. Later that year, Wallace and Evans gave birth to their first son, Christopher ‘C.J” Wallace Jr.

While in the process of recording his second album, “Life After Death” Wallace and rapper Lil Cease were taken to jail for smoking marijuana in a public place. Due to the arrest, their car was impounded and they were forced to rent a car instead.

Wallace decided to rent a Chevorlet Lumina with brake problems. Later that night, the car was involved in an accident where it collided with a railing. The wreck caused a Lil Cease’s jaw to shatter and Wallace to completely break his left leg. The injury caused Wallace to have to use a cane and remain hospitalized. He didn’t let the hospitalization stop him however, instead he continued to work on his music.

While promoting the release of his album “Life After Death” the rapper flew to Califonia in Feburary of 1997. He gave an interview that he is afraid for his life and often has to travel with security. He didn’t state that he was afraid for his life due to the incident with Shakur. Instead he said he feared for his safety because he was a celebrity.

In early March of 1997, Wallace presented Toni Braxton at the 11th Annual Soul Train Awards where he received boos from most of the audience. The dam had begun to break, and the East Coast vs. West Coast feud reached the tipping point of turning Biggie into a messiah.

After the ceremony, he went to an after party that was closed in the early morning of that next day by the fire department due to overcrowding. According to reports, guest included Aailyah, Sean Combs, and members from the Crips and Blood gangs. He and his crew were followed by a Chevrolet Blazer with Paul Offord, Bad Boy Records’ director of security.

A Death Leading to Infamy

The increased security detail wasn’t enough to prevent Wallace’s death. While Wallace was stopped at a red light on crowded streets, a Chevy Impala pulled alongside his vehicle. A still-unidentified man emptied the round from a pistol into the car. Four rounds struck Wallace, and while his entourage quickly delivered to the hospital, he died before he could receive treatment. Despite taking four shots, it was discovered that only the final round was fatal.

Biggie may have died in early 1997, but his legacy would last well beyond that. His funeral was attended by practically every luminary in hip-hop circles. Mary J. Blige, Foxy Brown, Run DMC, and Busta Rhymes were just a few mourners at the ceremony. And his music continued to live well beyond his last breath. For a man who was one of the biggest influences on modern hip-hop, Biggie actually released more albums after his death than during his life.

Life After Death was only Biggie’s second official release, and it was released 16 days after he was murdered. It was a massive hit, and the vast selection of notable featured artists was possibly the most fitting eulogy possible for his life. And since his death, Biggie has become one of the most sampled artists in hip-hop. His samples have appeared in songs from names as varied as Michael Jackson, Usher, and Lil Wayne.

If Christopher Wallace hadn’t died at the height of his career, would he be seen today as the savior of hip-hop? It’s hard to say, but his unique style of delivery and his lyrics speak for themselves. Biggie may have died before he could have reached his potential, but it’s hard to say that his natural talent isn’t appreciated.

And despite his relatively short life, real talent talks. Biggie’s mural in New York City has become legendary, and the man exists today as one of the few true patron saints of rap music. And then there are personalities who grew up in his personality orbit like Lil Kim who earned the success they deserved in some part due to his influence.

For better or worse, Biggie’s name will always play a major role in what hip-hop means. And his influence is known throughout the world. Countless publications have named Biggie the best rapper of all time, and it’s unlikely that’s going to change any time soon.