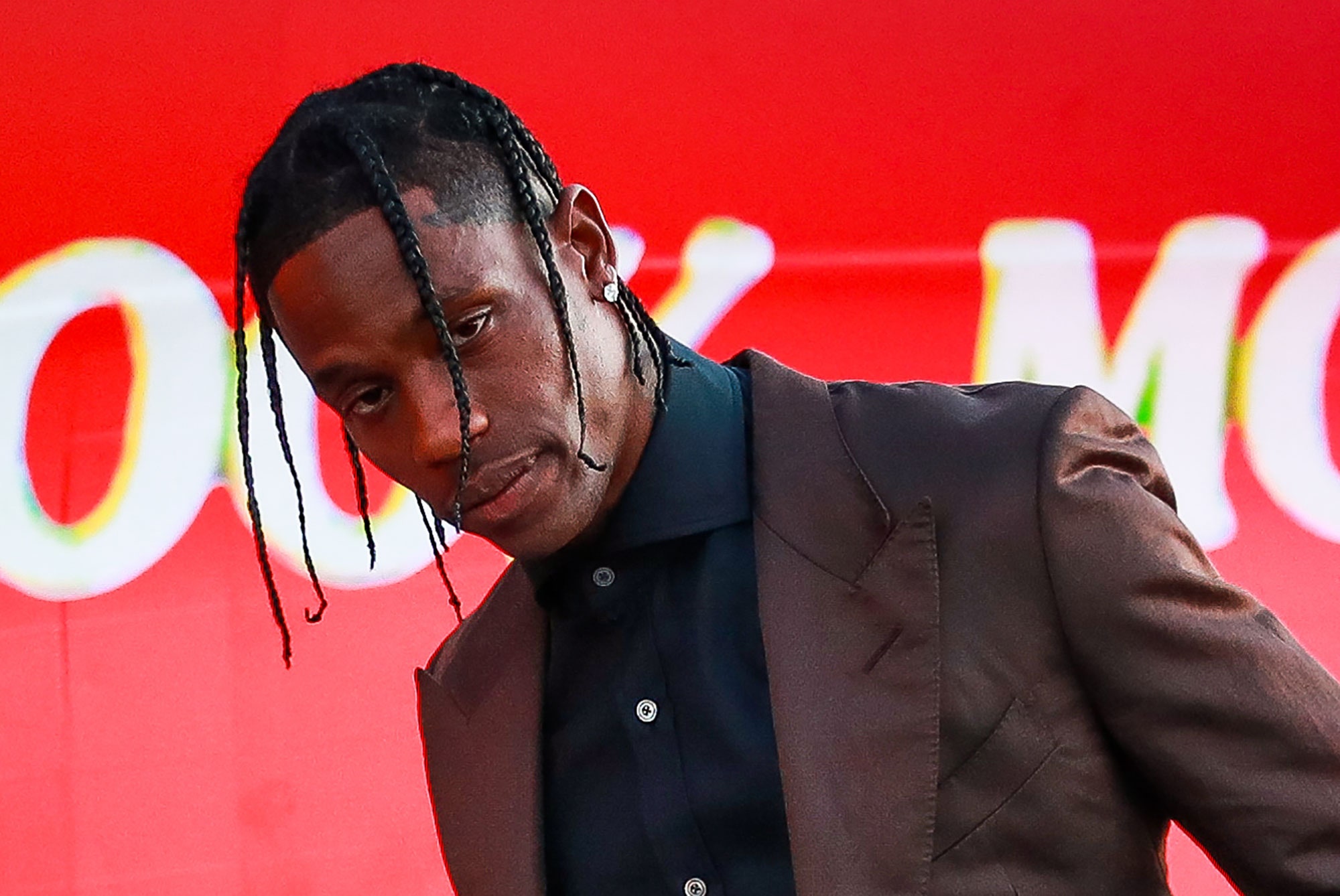 Do not make the mistake of labeling him as a rapper or a hip hop artist; Travis Scott insists that his music and star persona transcends those genres to become something more. Whether you agree, it is indisputable that Travis Scott has taken the music scene by storm, quickly carved out his own place, and earned the right to a little clout. From the streets to the stage, Travis Scott’s authentic story shows a rise worthy of the beats he lays down.

Travis Scott (name also styled as Travi$ Scott) was originally born Jacques Berman Webster II on April 30, 1991, in Houston, Texas. As a child from age one to age six, he grew up living in the south central South Park neighborhood of Houston with his grandmother. South Park was a dangerous neighborhood that was very well known for crime at that time.

As a young man, this played a strong part in influencing Webster’s outlook on life. He has spoken about his upbringing and how it shaped him, saying, “Growing up, my grandmother stayed in the ‘hood so I seen random crazy s***. [I saw] mad bums and crazy spazzed out motherf***ers, I saw people looking weird, hungry, and grimey [sic]. I was always like, ‘I gotta get the f*** out this s***.’ It gave me my edge—[it made me] who I am right now.” 1

Webster then moved out of Houston and on to Missouri City to live with his parents, which was in great contrast to his time in South Park. Though it was still part of Houston, bordering the southwest part of the city, Missouri City was much more suburban and middle class. Both of his parents worked, with his father running his own business and his mother as a representative of Apple.

It should also be noted that Webster had musical influence at home in his family, as his grandfather was a composer of jazz tunes and his father played soul music. Having two musical father figures in his life and also learning to play both piano and drums at the very early age of three jump started his career in the profession. In fact, Webster is said to have made his first beat when he was just five years old.2

As a teenager, Webster studied at Elkins High School and graduated at the age of seventeen. He then went on to continue his education at the University of Texan in San Antonio, but his college career did not last. He dropped out during his second year at university upon deciding to pursue his musical career to the fullest. It was then that Webster left Texas altogether to make the move to New York City and jump start his profession in music. This decision greatly upset his parents, who wanted him to stay in college. In response, they cut Webster off financially, and he was left to his own devices in the big city.

And how did he make the transition from Jacques Berman Webster II to eventually become Travis Scott? He tried several other names before settling on his current moniker, such as Cactus Jack and La Flame. When he first began to use the name, it was originally styled as Travi$ Scott; however, he decided later on to spell it without the additional flourish. The name “Travis Scott” was created as a combination of influential names from his childhood. “Travis” was the name of one of Webster’s late uncles, and “Scott” was adopted as a tribute to artist and personal hero Kid Cudi, whose full name is Scott Ramon Seguro Mescudi. Kid Cudi was such a hero, in fact, that Webster confessed to breaking into tears upon meeting him for the first time.

Travis Scott: The Music, The Career

While his beat making started very early on, Travis Scott’s rise to professional musician had a somewhat slower burn. In 2008, he formed a duo with his friend of many years, Chris Holloway, which was known as The Graduates. The two released an EP on the then popular social media website, Myspace. He also had a project in 2009 through 2012 called The Classmates with some school friends that ultimately broke up due to some personal issues.

Upon dropping out of college and leaving Houston behind, Travis Scott then moved up to New York City, where he lived in the Washington Heights neighborhood on the north side of Manhattan. After a few months of living in NYC and staying at his friend’s place, Scott became frustrated with the city and decided to move again, this time to Los Angeles.

Unfortunately, Scott did not at first have much luck out in the City of Angels, either. He spent a tumultuous time without having a steady place to live, causing him to move temporarily back to Houston. He was not welcomed back by his parents, though, and so he returned again to Los Angeles, this time couch surfing with a friend who was a student in the area at the time. It was during this period that one of his tracks, “Lights (Love Sick)” got a listen by T.I., the Atlanta-based rapper and Grand Hustle Records owner.

After this, a representative of T.I. got in touch with Scott and invited him to come to a studio meeting. It was during this meeting that T.I. heard another of Scott’s productions, “Animal,” and freestyled on top of it.

The release of Travis Scott’s first extended play, Owl Pharaoh, was originally announced as slated for 2011, but it was subsequently delayed in order to recreate and rework the project. Scott went under advisement of both T.I. and Kanye West during this relaunch period, and the release date was then set for 2012. However, this release date also came and went, and another reworking and release announcement came for February 22, 2013 – and again, this date came and went without the drop taking place.

The album received acclaim from music critics overall. It was nominated that year for the BET Hip Hop Awards “Best Mixtape” category. Other highlights include a number 21 ranking by Spin on the “Forty Best Hip Hop Albums of 2013” list and a nod from XXL who called Owl Pharaoh the fifth best mixtape of the year.

It was met with positive reviews from critics; XXL stated “The 12-track effort displays the Houston rapper’s eclectic production style, as well as his boastful raps that are similar to his mentors Kanye West and T.I. Overall, it’s some great new material that we’ve been missing from him since his excellent debut, Owl Pharaoh.” 3

Tracks Listed on Days Before Rodeo

The debut studio album from Travis Scott, Rodeo, came out on September 4, 2015 through Grand Hustle Records and Epic Records. Two singles tracks stood out in the album, “Antidote” and “3500,” and an even more high profile list of contributors made guest features on the album (notably, Kanye West, Justin Bieber, Future, Quavo, among others). After a United States Billboard 200 debut at number three, Rodeo would then go on to be certified platinum by the Recording Industry Association of America. The title, Rodeo, reflected Travis Scott’s feelings on his life – that it was like a rodeo, and he was just trying to hang on to a wild animal.

Birds in the Trap Sing McKnight

On September 2, 2016, Scott released his second studio album, Birds in the Trap Sing McKnight. The album name was a tribute to his childhood friends and growing up in Missouri City, referencing specifically the social trap in which they all felt stuck during their lives there. Big name features on the album include Travis’s namesake, Kid Cudi, along with Andre 3000, The Weeknd, Nav, 21 Savage, Kendrick Lamar, and Bryson Tiller.

Birds in the Trap Sing McKnight debuted on the United States Billboard 200 at number one, making it Travis Scott’s first number one album. It then went on in 2017 to be certified platinum.

Tracks Listed on Birds in the Trap Sing McKnight

A collaboration project of Travis Scott and Quavo, the Huncho Jack, Jack Huncho album dropped as the debut of the pair as Huncho Jack on December 21, 2017. This was followed up by the release of Astroworld, Travis Scott’s third solo studio album, on August 3, 2018. The album name was derived again from Scott’s youth in Houston, Texas and is in reference to the now nonexistent theme park, Six Flags AstroWorld.

The album was both a critical and commercial success. It hit triple platinum status through the RIAA and garnered three separate Grammy nominations for the year 2019 (Best Rap Album, Best Rap Performance, and Best Rap Song for “Sicko Mode”).

Additional production from Cyhi the Prynce

Scott has continued to produce a number solo and collaborative projects, including a Netflix documentary entitled Look Mom I Can Fly (August 2019), a compilation album consisting of the members of the Cactus Jack label (Jackboys, December 27, 2019), and a duo number with Kid Cudi under the combined name of The Scotts. His most recent single, “The Plan,” was released on August 22, 2020, and the track also serves as the movie theme of Tenet, directed by Christopher Nolan.

The Man Behind Travis Scott

As for the personal details of his life these days, it is well known that Travis Scott and Kylie Jenner, the reality television star, became a couple in the spring of 2017, leading up to the birth of their daughter, Stormi Webster, on February 1, 2018. As of now, the couple has reportedly split up (as of September 2019), but rumors of their reuniting are on the rise.