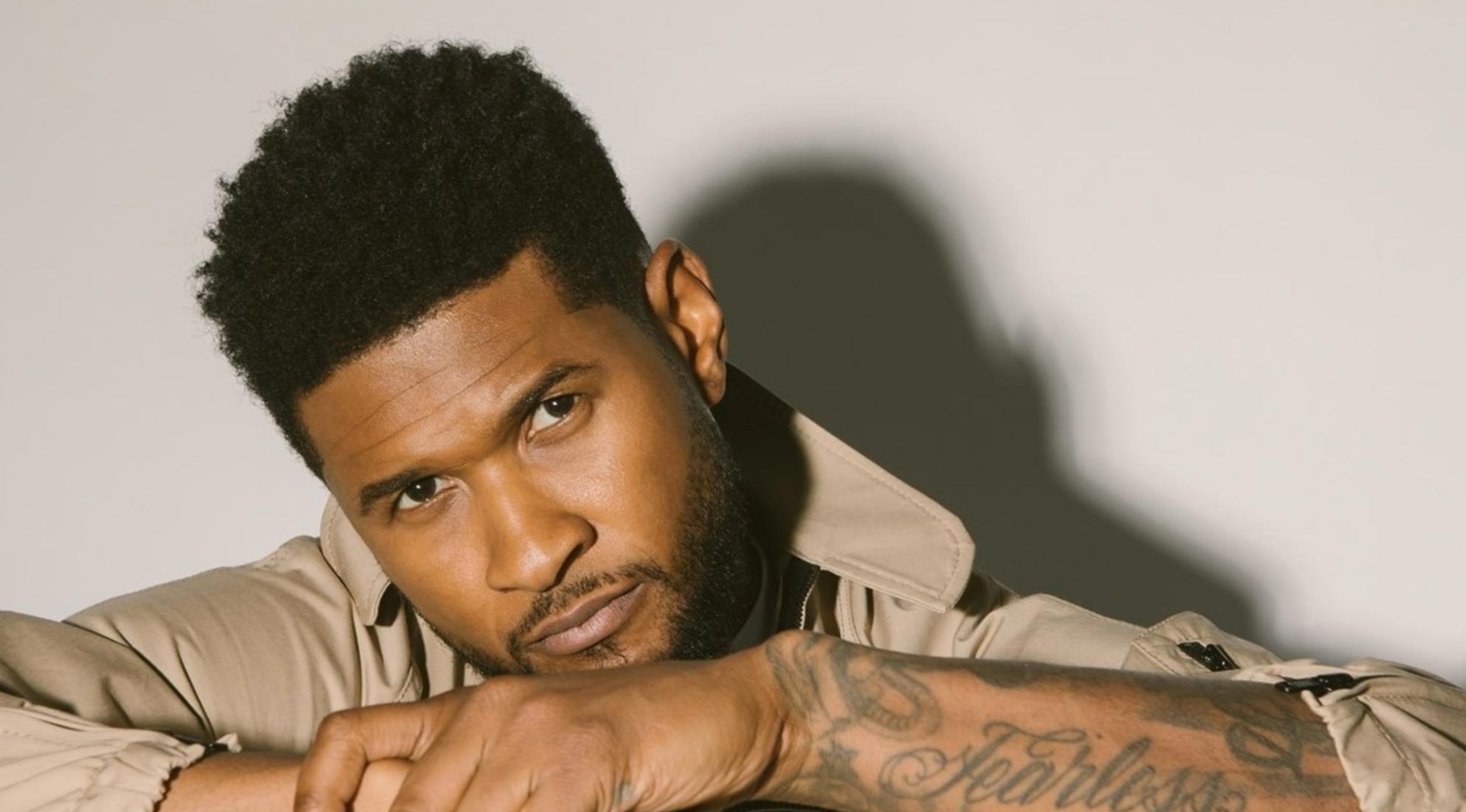 Crooner, producer, actor, activist, coach: Usher is the definition of celebrity. Read on to get the scoop on this prolific artist’s rise and continuously evolving career.

“Usher” is no stage name; in fact, it is a family name several generations deep. Born Usher Raymond IV on October 14, 1978, the artist that we know today inherited his name from his father, Usher Raymond III. Young Usher was born to his father and the family matriarch, Jonetta Patton (nee O’Neal) in Dallas, Texas.

The family moved early in his life to Chattanooga, Tennessee, where Usher would spend the majority of his childhood. As his father left when Usher was only one year old, he then grew up under the watch of his mother and then step-father, later to be joined by a half-brother, James Lackey, in 1984.

Singing came naturally and early in Usher’s life. At the age of nine, Usher joined a local church choir for youths in Chattanooga. It was here that he truly began to shine, and his grandmother encouraged him to pursue his talent further. This led the family to seek more opportunities for his professional growth and development, and they decided to move to Atlanta, Georgia.

His musical career began to pick up speed very early on. He joined an R&B five man group called The NuBeginnings when he was ten years old, leading to a ten track album with the quintet. While originally the album was only available through mail order, it was later released again in 2002 by Hip-O Records. His time with The NuBeginnings came to a final end when his mother then began putting him into singing competitions. At the time he was twelve years old, and this would continue as he attended the Atlanta area high school, North Springs.

During a local talent show in which he performed at age thirteen, Usher was introduced to Bobby Brown’s bodyguard, A.J. Alexander. Alexander then began taking young Usher to various talent shows to exhibit his talent, eventually leading him to a performance on the television scouting show, Star Search. This particular episode was seen by an Artist and Repertoire representative of LaFace Records by the name of Bryant Reid. Bryant set Usher up with an audition for L.A. Reid, LaFace’s co-founder.

For his audition, Usher performed the hit single by Boyz II Men, “End of the Road,” and his rendition so impressed Reid that he was given a contract immediately. From there, Usher recorded a movie soundtrack song for the film Poetic Justice,  the 1993 tune “Call Me a Mack,” and his career was officially off and running. His mother, forever and always a supporter, resigned from her career and took over as Usher’s manager.

Of course, an early teenage rise in the music profession as a singer came with its own set of challenges.

As Usher continued to grow into his teens and go through puberty, he struggled to keep his voice in check and often lost control of it. In 1994, with the threat of losing his place on the label, Usher left Atlanta to go spend some time living under the mentorship of Puff Daddy in New York. He called this period of time some of the “hardest days” of his life. “I had to knuckle up, figure shit out in New York” he said in an interview, reflecting on that time. 1

After a great deal of back and forth and worry from his label, Usher was finally able to release his self-titled debut album on August 30, 1994. Even as the album experienced some success and climbed the Billboard Top R&B / Hip Hop Albums list to number twenty-five, again Usher experienced some growing pains – quite literally, in this case.

There was a great deal of public dissent against the album due to the sexual nature of the songs being sung by one so young (at the time, Usher was only fifteen years old). When this again caused issues with LaFace and potentially threatened his career, Usher’s mother took the reins on his professional direction. She had him return to performing in more live talent shows, which allowed him to gain more popularity and fans.

Ushering In a New Era

Usher graduated high school and continued to work on building his musical career while also preparing to release his second album. Co-produced by friend and fellow Atlanta hip hop artist Jermaine Dupri, the second studio album, My Way, came out on September 16, 1997. The album singles, “My Way,” “You Make Me Wanna…,” and “Nice & Slow,” all hit platinum sales, and the album itself went six times platinum. My Way eventually hit the number one spot on the Billboard R&B/Hop list. Though iit earned him a Grammy nomination that year, critical response to the album is somewhat mixed. Nevertheless, this album is considered Usher’s breakthrough.

Tracks Listed on My Way

It was also around this time that Usher began to take to the silver screen. He made a few appearances in the UPN sitcom Moesha (which starred R&B singer Brandy), developing his character into a recurring role, and later had a part in the suspense film The Faculty.

Originally planned for release under the title All About U, the third studio album from Usher was delayed due to re-working and edits, eventually to be put out under the name 8701 on August 7, 2001. Usher took the Grammy award in 2002 and 2003 for Best Male R&B Vocal Performance for his singles “U Remind Me” and “U Don’t Have to Call,” respectively.

On March 23, 2004, Arista Records released the fourth of Usher’s studio albums, Confessions. The album was already highly anticipated in response to the hit single, “Yeah!” a collaboration with hip hop star Lil’ Jon that had previously been released in January of the same year and taken the charts by storm.

Usher took several Grammy awards that year, including Best Contemporary R&B Album, and Confessions stood as one of the top selling albums of the 2000s. Many speculated that the album and its contents contained insider information on Usher’s personal life, but producer Jermaine Dupree quashed these ideas, stating that the album was actually about his story and experiences.

Usher’s fifth studio album, Here I Stand, debuted in the number one spot on the Billboard 200 on May 13, 2008, and is largely seen as a tribute of love to Tameka Foster, his new wife, and their son. The album also has themes of loss reflecting his dealing with the death of his father, which occurred shortly before the album dropped. This is also around the time that Usher broke out from under the management of his mother to seek new representation. While the album was originally set to be titled Measure of a Man, Usher decided to change the name to Here I Stand as a symbol of the new place he had arrived in his personal life.

The album garnered overall praise critically but paled in comparison commercially to its predecessor, Confessions, selling only two million copies in the first few months versus the latter’s fifteen million in the same amount of time. Many attributed this decline in sales to fans being upset over Usher’s new marriage. 2

Tracks Listed on Here I Stand

In contrast to Here I Stand, Usher’s sixth studio album, Raymond v. Raymond, marked Usher’s divorce from his wife, which took place only a few months before the release on March 26, 2010. Critical response and reviews were generally mixed, but Usher still came away with multiple awards, including the year’s Grammy Awards for Best Male R&B Vocal Performance and Best Contemporary R&B Album.

As a follow up to Raymond v. Raymond, Usher later released his first extended play, entitled Versus. The EP came out on July 20, 2010, and it is considered an extension of the album preceding it – marking the final chapter in this point in Usher’s life.

As Usher moved forward with his personal life and career following his divorce, he took a position as a coach on the hit American talent scouting television show, The Voice, coming in as a substitute for fellow crooner Cee Lo Green. Usher coached several different contestants, finally landing a winner with Josh Kaufman. 3

Additionally, his seventh studio album, entitled Looking 4 Myself, came out on June 8, 2012. This album was intended to take on a new tone and sound musically, moving into a more experimental mode of R&B and incorporating inspirations from electronica and other world music.

Tracks Listed on Looking 4 Myself

Usher continued to push the envelope and explore different media alongside his music, including an interactive music video for Tidal, a music streaming platform. The song, “Chains,” addressed issues of racism and police brutality in a manner that was provocative and tied to the user’s experience; it used facial recognition technology to implement a rule for keeping the viewer’s eyes on the screen by pausing the video every time he or she looked away.

He also starred in the sports biography film Hands of Stone, in which he portrayed Sugar Ray Leonard and acted alongside Robert de Niro, Edgar Ramirez, and others. In addition to furthering his acting career with this project, Usher cut singles for the motion picture soundtrack.

His music career also continued to develop with the release of his either studio album, Hard II Love. The album came out on September 16, 2016 after first being made available for online streaming through Tidal on June 16 of the same year.

2018 marked the release of Usher’s ninth studio album, simply titled A, which came out on October 12. The project was a collaboration album with producer Zaytoven. A served as a tribute album to Atlanta, Georgia, as both Usher and Zaytoven spent a great deal of their childhoods growing up there.

Tracks Listed on A

On January 26, 2020, Usher performed a special tribute to Prince alongside Sheila E at the 62nd Annual Grammy Awards. He was scheduled to host the 2020 iHeartRadio Music Awards a few months later, but the event was put on hold as a result of COVID-19.