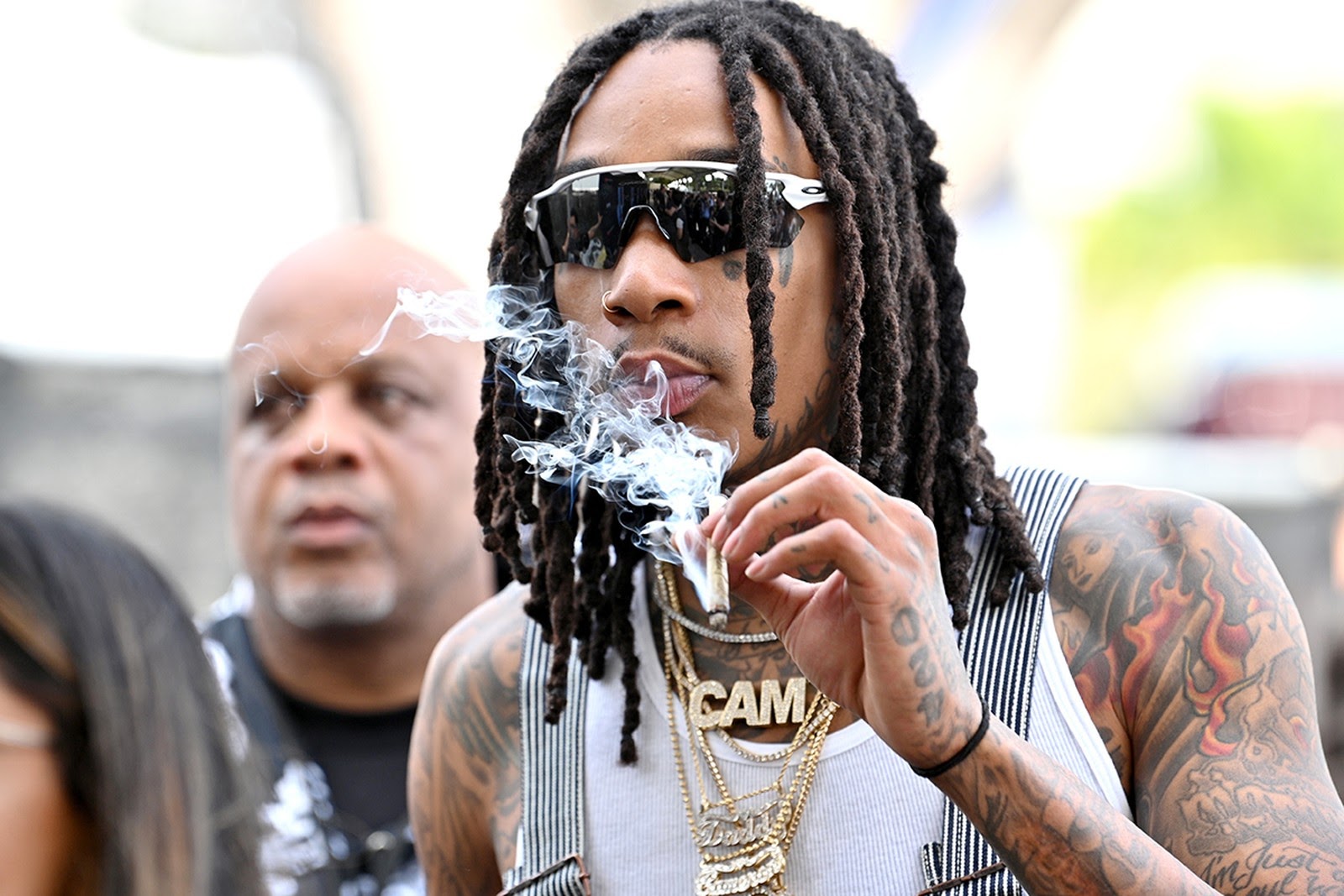 Wiz Khalifa is a successful rapper with hit after hit under his belt, gaining him thousands of fans and even more dollars. It all seems a dream, and yet he is able to maintain a charming and mellow manner while capitalizing on all new adventures and opportunities that come his way.

Born Cameron Jibril Tomaz on September 8, 1987, in Minot, North Dakota, Wiz Khalifa had to adapt to change at an early age because of his father’s job and his parent’s divorce when he was three.

With a father in the military, Wiz Khalifa lived in Japan, Germany, and the United Kingdom before finally settling down in Pittsburgh, Pennsylvania, with his mom in 1996. He started writing lyrics at a very young age and began to record his songs as he went into High School.

Wiz Khalifa’s long-lasting career has been so successful due to two main things. The first, how easily Khalifa is able to identify trends and stay relevant while also staying true to himself. The second, his fervent fans (also known as the taylor gang). These two factors, along with his extensive network of famous friends that he’s built up over the years, have made Wiz Khalifa a household name for many.

Local Fame and Getting Signed

After gaining some local traction around his songs and collaboration on mixtapes with other rappers, the label Rostrum Records had Khalifa sign a contract. Soon after, his mixtape Prince of the City: Welcome to Pistolvania was released in 2005. This mixtape led to a full-length album, Show and Prove, and projected Khalifa into the eyes of the big shots in the music business.

Soon, Wiz Khalifa signed to Warner Brothers Records and released two mixtapes: Grow Season and How Fly with Curren$y. However, his biggest hit was the single “Say Yeah,” which charted twice on the Billboard music charts. Interestingly, soon after signing with Warner Brothers, he decided to leave them over differences in opinion regarding his new album.

After, he released a few singles and mixtapes, but was mainly focused on collaborations with other artists and touring as much as possible. The touring, in particular, was a huge success and led to multiple sold-out venues.

Khalifa likely thought it couldn’t get much better, until he released his song “Black and Yellow,” an homage to the Pittsburgh Steelers. The song went viral (viral for 2010), hit the Billboard charts with a bang, and gained him his first nominations and wins at various music award ceremonies.

After “Black and Yellow,” Khalifa hit the ground running with albums, mixtapes, singles, collaborations, and features. He released three albums, Rolling Papers, O.N.I.F.C., and Blacc Hollywood, in 2011, 2012, and 2014 respectively. All of these performed very well and included collaborations and features with artists like Akon, Pharrell Williams, The Weeknd, Juicy J, Curren$y, Nicki Minaj, Snoop Dogg, and Ty Dolla Sign.

Although Wiz Khalifa had by this time established himself as a well-known and respected rapper in the hip hop industry, it wasn’t until his collaboration with Charlie Puth on “See You Again” was he really seen by the public as a whole. The song was a tribute for actor Paul Walker to be used in the movie Furious 7, part of the Fast and Furious franchise. Walker had died in a car crash during the days off he had from filming Furious 7. The song blew up and remains his most popular and awarded single. It topped charts around the world and was even nominated for a Golden Globe, Khalifa’s only nomination in this category to date.

Since his major success with “See You Again,” Wiz Khalifa released another album in 2018 called Rolling Papers 2, which was certified gold. He’s released a compilation album, Khalifa, two collaborative albums, Rude Awakening and 2009, an extended play: The Sage of Wiz Khalifa, and ten mixtapes. He’s also done dozens of collaborations and features, with each including people more and more famous as the years go by.

Wiz Khalifa’s impact on music and the style in which he goes about making his songs is well-reflected in his stage name. His stage name Wiz Khalifa was, in part, given to him by his grandfather. His grandfather was Muslim, and in Arabic, the word Khalifa means “spread the word.” Wiz Khalifa keeps that meaning close to his heart and wants to spread his word and his message to his fans.

Not someone to stick with the old, Khalifa has been able to make so many hits due to his ease in staying relevant. He knows who to talk to, who to make friends with, and how to post on social media. This easy-going nature and charm he has spread to his music, where his raps seem a little more light and fun than other rappers of the age. That’s not to say that he can’t deliver hard-hitting themes, as we’ve seen him do in “See You Again,” it’s just that he’s able to deliver his message with a more mellow approach.

His way of staying relevant is easily seen in his songs and the collaborations he chooses, in that he always seems to keep with the trends and know what’s popular at the moment. His song choices are more diverse than many other rappers.

He’s a man who loves a catchy hook, thus appealing to pop-lovers, the rapping stoners, the clubbers, and maybe in the future, even R&B lovers.

Wiz Khalifa is a man who loves weed, women, and working out. He loves posting about his life and constantly live streams his day-to-day comings and goings, and yet remains mellow about it all, no matter how luxurious or somewhat awkward it can be.

As a rapper who’s been in the game for a while now, Wiz Khalifa has had his share of romantic entanglements. Some of his girlfriends include Winnie Harlow, Isabella Guides, Natalie Nunn, Indue Marie, and Sara Dastjani.

The most famous relationship of Wiz Khalifa has been with the model and influencer Amber Rose. They started dating in 2011, were engaged by 2012, and were married by 2013. In 2013 they conceived a son, Sebastian Taylor, and the next year in 2014, they filed for a divorce that was finalized in 2016. Currently, Wiz Khalifa has been confirmed to be dating the model Aimee Agularr since 2019.

An avid and vocal supporter of marijuana, Wiz Khalifa was arrested after a concert for possessing around 60 grams of weed in 2010. Then in 2014, he was arrested at the El Paso International Airport, also for weed. In a 2014 interview, he claimed that he had been arrested around 21 times just for marijuana.

Another arrest for Khalifa came in 2015 when he was arrested at an LA Airport for not getting off his hoverboard.

One of Wiz Khalifa’s biggest hobbies is staying fit, and he’ll try anything that’ll keep him active. First, it was jiu-jitsu, then it was muay thai, then, it was MMA. So far, MMA fighting has stuck the longest and achieved the most results in terms of muscle. But will we see him in the ring anytime soon? He says probably not… unless there’s enough money involved.

As an established member of the hip-hop community, Wiz Khalifa has been nominated for numerous awards and has been able to pursue other projects in the entertainment sphere.

Wiz Khalifa has been in three movies: Gangs of Roses 2: Next Generation, Mac & Devin Go to High School, and Demi Lovato: Simply Complicated. There is a possible fourth movie coming out at an unknown date.

He has been on eight television shows: Duncanville, Dickinson, American Dad!, The Eric Andre Show, Ridiculousness, This Is How I Made It, Punk’d, and Master or the Mix.

Pittsburgh, Pennsylvania, had an official “Wiz Khalifa Day” on 12-12-12 as a way to honor the rapper for his contributions towards promoting Pittsburg.

His love of weed is well-documented, and as a result, he is sponsored by the weed company, The Cookie Company, and even has a strain of weed named after him – Khalifa Kush.

Wiz Khalifa started 2021 with a bang with his mixtape #FUCC2020, an aptly named mixtape if ever there was one. His songs “Chicken With the Cheese” and “Ain’t Shit Free” are standouts on the tape, and he promises there’s more to come.

In addition to his mixtape, he’s done other features and collaborations such as a feature on the song “Everything New” by DJ Pharris with Chance the Rapper and Rockie Fresh and a collaboration with 24hrs on a song called “Dreams.”

So far, with Covid-19, he hasn’t been able to tour with his songs, but his fans can tune into the Rolling Loud festival in Portugal in July of 2021 to see him perform his new songs live.

Other than his new music content, Wiz Khalifa debuted a takeout-only restaurant last year in 2020 named Hotbox by Wiz. The restaurant specializes in comfort and stoner food, with a focus on meats, cheeses, potatoes, and heavy desserts. Available in cities like LA, NYC, Pittsburgh, and more, it has been well received so far and is currently expanding to be available in new cities soon.

Wiz Khalifa Gained About 35 Lbs. with MMA Training: ‘I Like Myself with More Weight’ | People