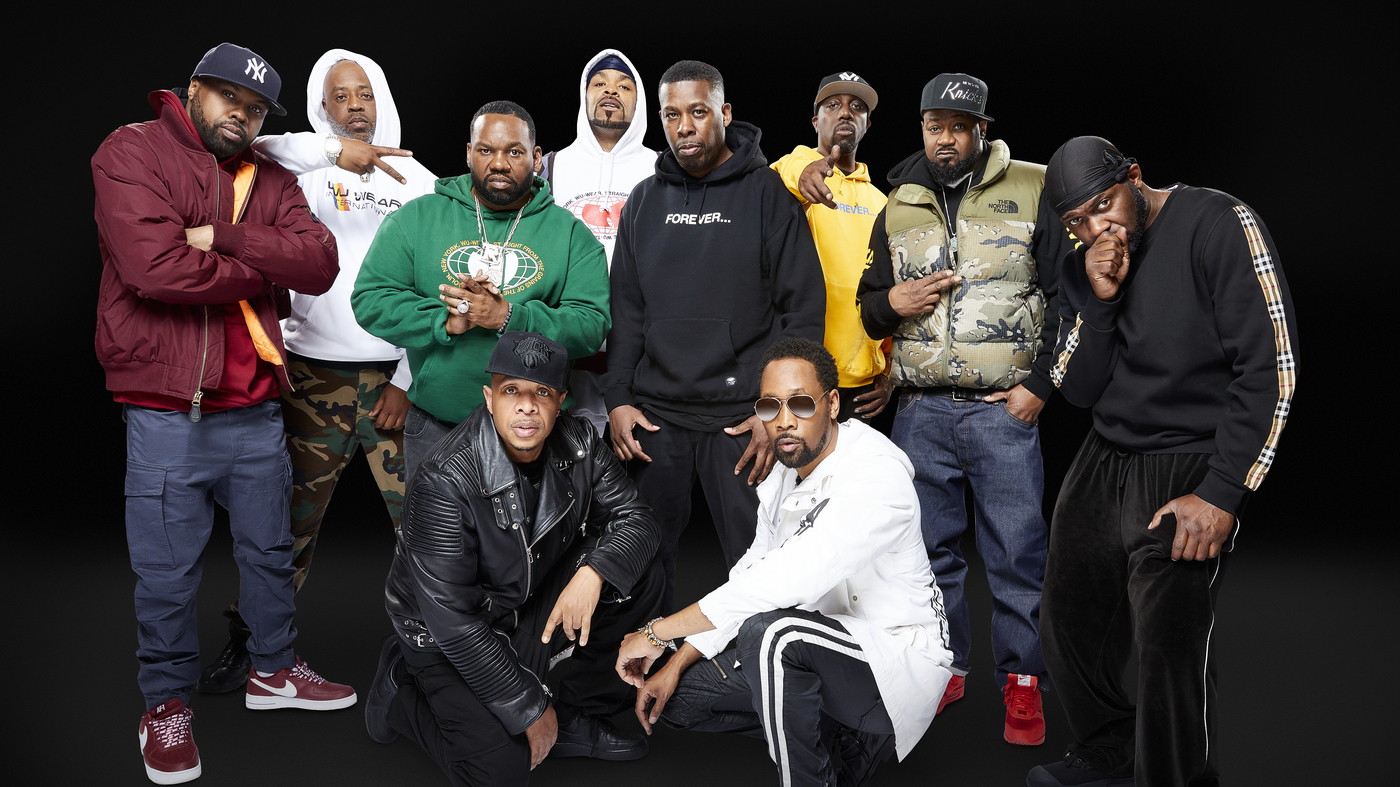 The Wu-Tang Clan has been around since 1992 and rose to prominence in the mid and late 90s. Considering their unique and cohesive sound, the group is still a force to be reckoned with. Many of their group members went on to have successful solo careers all on their own. But before they started selling millions of albums worldwide and going platinum and gold four times, the hardcore hip hop group came from humble beginnings.

In the late 1980’s the cousins Robert Diggs, Gary Grice, and Russell Jones got together and formed a group they called Force of the Imperial Master and the All Together Now crew. They were all known to use an alias while performing which were Grice as The Genius, Diggs as Prince Rakeem or The Scientist, and Jones as The Specialist. They gained a lot of traction in the boroughs of New York without being signed to any many major record labels. Even Biz Markie praised the group for their talents and cited them as an influence on his music.

In 1991, The Genius and Prince Rakeem were signed to separate record labels but were still making music together. Through Cold Chillin Records, the Genius released “Words from the Genius.” And through Tommy Boy Records, Prince Rakeem released “Oh I Love You Rakeem.” Unfortunately for both artists, they were both dropped from the labels shortly have their albums dropped. Being dropped from a label was a huge hit to both of their collective egos.

But if they wanted to make it in the music industry, they couldn’t allow setbacks to define their careers. Determined, both artists decided to pursue their musical endeavors. Prince Rakeem decided that his stage name wasn’t appropriate for him anymore and decided to simply be referred to as RZA professionally. The Genius followed suit and decided that a more sufficient stage name for him would be GZA.

When RZA met Dennis Coles, the two became inseparable and discussed their love of rap music. Coles had previously served a prison sentence when he was 15 and had the personality at the time that attracted RZA. Eventually, RZA convinced Coles to adopt a stage name into his persona and he decided on Ghostface Killah the two decided that they wanted to create a hip-hop group that was composed of members who blend Eastern philosophy and Kong Fu movies. They ended up forming the Wu-Tang Clan in 1992 with RZA as the frontman. RZA and Wu-Tang group member Ole Dirty Bastard named the group after the film, Shaolin and Wu-Tang.

In 1993, the group released the song “Protect Ya Neck” which got the group a hefty underground following due to its popularity. Even though the track was well received the group was having some trouble signing to a major record label. So each member was recording music on their own with their tracks topping the charts. The group released “Enter The Wu-Tang (36 Chambers)” in November of 1993. It is still considered one of the greatest hip-hop albums of all time. Considering each member collectively was signed to a major record label but couldn’t get a deal together, it was as if they changed the structure of hip hop completely at the time. The influence of the album allowed members Ol’ Dirty Bastard, GZA, RZA, Raekwon, U-God, Method Man, and Ghostface Killah all to negotiate solo contracts.

RZA followed up his success with the album, by founding the group the Gravediggaz with Prince Paul and Poetic. The group then went on to release 6 Feet Deep in August of 1994 which became one of the best works of the time known to emerge from the horrorcore scene. He then went on to produce the second wave of artists that were a part of the group. Method Man’s “Tical” was released in November of 1994 which was also produced by the rapper.

Considering each member of the group all had their successful careers, Wu-Tang worked together to release their second album, Wu-Tang Forever which was released in June of 1997. The album was released to generally positive reviews and even landed at number one on the Billboard Charts. Following the release, each artist began to focus mainly on their solo careers.

In the early ‘00s, the group came together and began work on The W. O.D.B. who was currently serving a jail stint for violating his probation even made it onto the track, “Conditioner” which featured Snoop Dogg. He was able to use the two well telephones that inmates use to communicate with visitors to record his vocals for the track. The album was released in November 2000 and critics mostly praised the album. They particularly admired RZA’s production on the hit single “Gravel Pit”.

In 2001, the group released its album Iron Flag which was a bunch of songs the group recorded that didn’t make it to any album. The album consisted of many tracks that were collaborations with already established artists. Around the time, Wu-Tang member Method Man began his acting career appearing alongside his co-collaborator Redman for the stoner comedy movie, How High.

The rapper Ol’ Dirty Bastard had an erratic experience with the group. His rise to fame was not only drastic but very quick and he wasn’t ready for it. One notorious instance happened at the 1998 Grammy awards. Puff Daddy beat the Clan out in the category they were nominated for. Instead of remaining seated, the rapper went on stage and interrupted Shawn Colvin’s acceptance speech for winning the award for the Song of the Year. The rapper’s time in the press for breaking the law was also highly publicized and a well-known fact at the time.

The rapper was arrested several times for shoplifting, assault, wearing body armor after being convicted of a felony, and possession of cocaine. He also missed a few court appearances which landed the troubled star in rehab. He then proceeded to escape rehab near the end of his long sentence. Ol Dirty Bastard ended up spending one month on the run from the law as a fugitive. Unfortunately for him, the law caught up to him and he was again sentenced to more prison time. Considering he had a bunch of street credentials and was a well-known rapper, a bunch of record companies began to flirt with the idea of him signing with their label. The rapper decided to be represented by Roc-a-Fella Records.

Unfortunately, the rapper’s life was cut short on November 13, 2004. He was in the recording studio with the Wu-Tang Clan and collapsed unexpectedly. Later that night, he was pronounced dead shocking many of his fans. Over the years the Wu-Tang Clan has paid homage to the fallen rapper. In August of one of his sons came out to a Wu-Tang show and he rapped “Brooklyn Zoo” as a tribute to his father. The Clan also brought the rapper’s mother onstage for a rendition of the song “Shimmy Shimmy Ya.”

In 2005, RZA released his first book “The Wu-Tang Manual which sold well in bookstores worldwide. GZA and the producer DJ Muggs released their long-awaited collaboration “Grandmasters” to great reviews by critics and fans alike. At the time, the fans had made many complaints about the quality of their releases wanting something pure and raw. This seemed to do the trick for some of the artist’s biggest fans.

People began to speculate that the Shaolin vs. Wu-Tang would be released considering it had RZA’s input. Around that time Wu-Tang Members Method Man and Raekwon announced that they were working on the upcoming release Wu-Massacre. In February 2011, the album Wu-Tang Live At The Palladium was released. The group decided to release it on their official Facebook page. The song was available to the first 100 people that downloaded it. Fans could enjoy unreleased freestyles and songs by the group. Once the 100th person downloaded the album, the page went away.

In the summer of 2011, Raekwon that the group had gotten back in the studio to record new music. He said the album was still technically in the early stages. Ghostface Killah said that the album was set to release in May of 2012. There was a lot of confusion within the group about this release and GZA said the album’s release was highly unlikely. In January of 2013, the Wu-Tang Clan officially announced that they had begun work on their sixth studio album together to celebrate the 20th anniversary of the release of 36 Chambers.

In March of 2014, the Wu-Tang Clan announced that they had worked on a record entitled The Wu – Once Upon A Time In Shaolin in addition to A Better Tomorrow. Considering the album was a double album consisting of a whopping 31 tracks, fans were understandably interested in its existence. The album was not set to be released commercially so no one had heard tracks off the album. One copy was ever produced while the original would tour around in museums dedicated to music worldwide. The available copy would be sold at a premium to one lucky buyer. That buyer happened to be controversial pharma bro, Martin Shkreli who acquired the rare find at 2 million dollars.

When the group found out Shkreli purchased the artifact, the press hounded many members of the band. “When I was informed how they were approaching selling the album, I kind of flipped out, because I was misinformed by the person who gave me the information,” Method Man told Business Insider in 2017. “It’s hard for me to speak on it because I wasn’t in the loop.” Although he does regret that it did end up in the hands of someone that tried to profit off of life-threatening medication. “My personal opinion, I wouldn’t have done it that way,” he said. “I would have just given it to the people at the end of the day. But you have people that have families to feed, things of that nature. And then to have someone [buy the album] that is pretty much disliked by a lot of people based off something that had nothing to do with hip-hop, that made it worse.” He said.

RZA didn’t regret the outcome of how the album got into the hands of Shkreli. “The Wu-Tang Clan has always been driven by innovation, and this marks another moment in musical history,” he said in a statement, adding that the group would donate a significant portion of the proceeds to charity. “From the beginning, we hoped that this concept would inspire debate and new ways of seeing creativity. Both of those goals have been achieved, and the ideas continue to evolve.” The group did announce that a significant amount of proceeds from the sale of the album would be donated to charity. The group released its latest album ‘The Saga Continues” in 2017. The album features all Wu-Tang members except U-God who proceeded to sue the group for 2 million dollars in a royalties dispute.

You don’t see the sort of success Wu-Tang has had very often. Considering the group wasn’t collectively signed to a major record label and had as many successful releases as they have, the group managed to prove naysayers wrong. Fans continue to flock to their shows and even today the group has an unmatched stage presence. The scale and success of their collective are practically unprecedented in the world of hip-hop, and they continue to maintain a legendary position in the community decades after their formation. Nor have we seen a group launch quite as many superstars as Wu-Tang has. No matter what happens, they’ll remain an important chapter to win hip-hop history. If the group happens to be in your area, you are going to want to catch a show before they decide to stop touring forever. You won’t regret a single second.