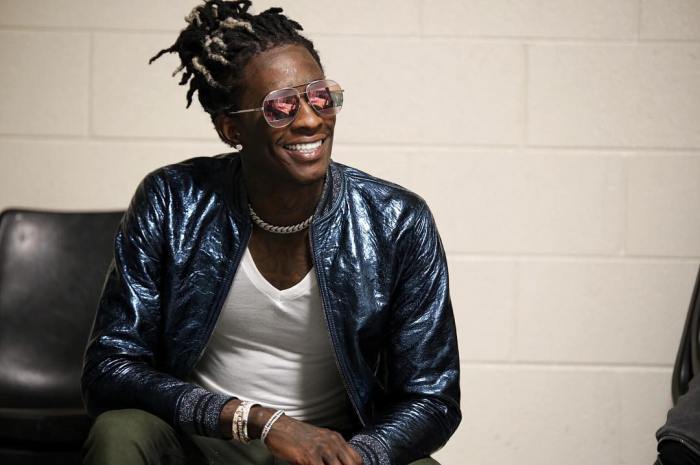 You’d have to really dig to find a rapper name more generic than “Young Thug” – but it’s a sign of both Young Thug’s talent and of the changing standards of the genre that his rhymes are aggressively undermining the traditional norms of what it means to be a man in hip-hop.

Because while Young Thug’s name may evoke hyper-masculine sensibilities, he conveys a sense of swagger that actually violates those norms. The past decade has seen young hip-hop heads transition towards a style that’s more punk rock than thug chic, and Young Thug has a large part to play in that stylistic tide shift.

Young Thug has adamantly denied any questions that he’s anything but straight, but that’s entirely beside the point. The fact that a musician can be as flamboyant and gender non-conforming as Young Thug is in the existing hip-hop landscape tells us a lot about how the rap game has changed and how expressive rappers can be without prescribing to traditionally aggressive and hyper-masculine standards of manhood.

The man who would become Young Thug was born as Jeffery Lamar Williams in 1991. He grew up in Atlanta, among the South’s most influential era of hip-hop, but he would help to create an entirely new sound for the hip-hop scene years after Outkast, Arrested Development, and Goodie Mob created a definition of what Southern hip-hop really was.

But before that, he was just another kid in the Jonesboro South projects of Atlanta. “Prestigious” or “rich” are the last words you could use to describe Jonesboro South, but it’s developed an understandable reputation in the hip-hop community. 2 Chainz, Ludacris, and Waka Flocka Flame all grew up in the area.

And there’s no doubt that Young Thug was influenced by his environment. Young Thug has been open about an experience in sixth grade where he broke a teacher’s arm. The attack earned him four years in a juvenile detention facility. But while he may have had some aimlessness and anger issues growing up, it’s hard to ignore the level of ambition and drive that has been such a guiding force in Williams’ career.

His career would properly start in 2010 at the age of 19. Young Thug’s appearance in the TruRoyal song “She Can Go” was his first break at success and one that provided him with the drive he needed to push on. He’d release three mixtapes between 2011 and 2012, but his efforts would pay off when these mixtapes drew the attention of one of Atlanta’s most acclaimed musical personalities: Gucci Mane.

Gucci was impressed by the hunger and unique perspective of Young Thug’s rhymes, and he rewarded the young rapper by signing him to 1017 Brick Squad Records.

As an Asylum/Atlantic imprint, Young Thug had access to a wider audience than ever before, but he trusted that the talents he’d spend the past three years honing would find purchase in the larger business landscape. Rather than shift his trajectory, Young Thug opted to release a fourth mixtape that drew from what he’d spent the past few years building on.

It was a gamble that paid off. 1017 Thug received critical acclaim throughout the world of music journalism. Complex placed it on the top 50 albums of 2013, Rolling Stone ranked it among the five best mixtapes of the year, and FACT decided that it was actually the best mixtape of the year.

Gucci Mane’s recommendation was no small thing in 2013, but it would be hard to argue that Young Thug didn’t earn his stars. So it’s unsurprising that the big hits off of 1017 Thug brought the attention of some other hip-hop heavyweights. The release of single “Stoner” in January of 2014 was arguably the first through breakout hit that Young Thug had, but it also inspired numerous other arts to release their own remixes.

Despite remixes from luminaries like Jadakiss and Jim Jones, Youg Thug was critical. His response was to claim that “If you feel like my song isn’t tough enough to the point where you have to freestyle… Don’t think I’m happy that you’re doing it because of who you are. I’m ready for war.” His cockiness would earn justification by the end of the decade. In 2019, Pitchfork recognized 1017 Thug as the 96th best album of the decade.

Breaking Out in a Big Way

If 1017 Thug saw Young Thug’s transition into the limelight, the next few years would solidify him as one of the most important artists working in hip-hop. He came out of the gates strong, with multiple different record labels competing to earn the rights to represent him.

And while Williams would play his cards close to his chest, there’s little doubt that the competition was fierce. According to Thug, Future’s Freebandz record label offered him eight and a half million. Ultimately, Young Thug would stay loyal to his roots, at least while he was in the process of courting bigger names.

While Thug inked off on a management deal with Rich Gang, he stuck with 1017 Brick Squad for his record deal

The following years under 1017 Brick Squad would be lucrative to Young Thug, but it would also successfully cement him as more than just a passing interest. Thug spent 2014 teaming up with Kanye West and receiving praise from the modern legend for his ability to churn out songs at an incredibly fast pace without sacrificing quality. While many artists would just tread water while waiting to line up their first album, Young Thug kept prolifically busy. In the short window between the release of his mixtape and his signing with a big name, Thug released the single “Eww”, which was praised by XXL as one of the best songs of the week. He also teamed up with producer Metro Boomer for a remix of a Drake song.

By June of 2014, public interest in where Young Thug would sign had reached a breaking point, but an announcement was made on the 17th. Young Thug would sign with 300 Entertainment. They moved on the opportunity quickly. Within two weeks, fan-favorite “Danny Glover” had been re-released as “2 Bitches”, and a collaborative single with Freddie Gibbs and ASAP Ferg would drop the same day.

A few months later, Thug would see his dreams realized with the release of a collaboration between him and Lil Wayne. Thug had long praised Lil Wayne as both his biggest influence and the rapper he’d most want to work with in the studio. By the end of 2014, Young Thug was topping the charts while also earning praise from the biggest music publications in the world. For many, Young Thug was seen as the new voice of hip-hop.

The Challenge of a First Release

By 2015, Young Thug was an exercise in contradictions. His mixtapes had been some of the hottest releases of the past few years, but he still had yet to debut an official release. He’d been anointed by music’s most pretentious publications as the heir apparent to the hip-hop throne. And he’d spent quite a few months appearing constantly as a collaborator but rarely as a start. Worst of all, his biggest hero had beef with him. Young Thug had announced that his first release would be “Carter Six”, as a spiritual successor to Little Wayne’s venerable “The Carter” series.

And while Thug may have intended it as a tribute, Wayne saw it as an insult. Perhaps worried about the imminent release of “The Carter V“, he lashed out. Wayne urged his fans to stop listening to Young Thug – and in response to a series of lawsuits, Young Thug renamed the upcoming release to “The Barter 6”. Even more infuriating, it was announced that this new release would be another mixtape rather than a debut album.

But Young Thug was quick to soothe the concerns of his fans and dealmakers in the industry. His debut would be titled “Hy!£UN35” (translated as HiTunes). It would come with more speculation about Young Thug’s label entanglements. In a somewhat bizarre announcement (and in contradictions to comments made by his management), Thug made it clear that he was signed with Atlantic Records but managed himself. Hy!£UN35 would never be released, but Thug would continue to prove his talents on the long path to a studio release.

In fact, a 2015 leak has caused Young Thug to become more aggressive with his releases, and it’s been a huge benefit to fans. The compilation mixtapes The Slime Season and The Slime Season 2 were both widely praised, and he continued to collaborate on widely regarded albums like “The Life of Pablo” with recurring collaborator Kanye West. Thug finally released the Slime Season 3 in March of 2016 – presumably closing out the mixtape series and wrapping up the release of tracks that would initially have been included in Hy!£UN35.

It would take almost a decade for Young Thug to release his first “official” studio album. Three years prior, he’d already bought his first home. Located in Atlanta, it boasts six bedrooms and eleven bathrooms in addition to a four-car garage, full theater, and bar.

This, along with an unwillingness to sign to a proper record label, is proof that success for a black rapper doesn’t necessarily have to mean obedience to a label. And with genre giants like Gucci Mane and Kanye West both working directly with Young Thug, he’s certainly not lacking in credibility.

But if there’s one thing that risks overwhelming Young Thug’s musical talent, it’s his stylistic expression. Thug has been unabashed and expressive in his preference for feminine clothing, and it could be changing the hyper-masculine and oftentimes misogynistic expectations of hip-hop culture.

And while there’s been the typical speculation that Thug’s crossdressing suggests he’s closeted, his personal life tells a different story. Kanye West – known for being a diligent perfectionist in his own right – has remarked on Thug’s ability to create a hit song in just ten minutes. But Thug has found plenty of time to keep himself occupied outside of his career.

Thug has six children from three mothers, the youngest of which Thug had when he was either 14 or 17. Thug is proud to proclaim that you can be a “gangsta with a dress“, and his unique sense of fashion has seen music critics compare him to both Prince and David Bowie. Combine that with a voice that has no real complement in hip-hop, and you’re left with an artist that’s unlikely to fade from the musical history books, no matter what his future holds.

Before Young Thug even dropped an official debut album from a studio, he was already one of the hottest topics of conversation in hip-hop. He’d been praised as a queer icon, a guiding light in a new shift towards psychedelica in hip-hop, and a successor to Lil Wayne. He’d been mentored by Gucci Mane and treated as a praised contemporary by no less than Kanye West.  And all of that because he had so much personality and so much skill.

It may have taken about a decade for Young Thug to actually drop a studio release, So Much Fun was fairly light and breezy but well regarded. And, interesting enough for someone who’s been clear and present for a decade, it’s still hard to know how Young Thug’s voice is going to develop. The promise of Punk, a release that’s supposed to be introspective and personality in contrast to the comparative whimsy of his initial release.

Young Thug is something of a contradiction, but that only makes him more fascinating. His combination of unconventional fashion with some more traditional swagger makes him stand out from just about everyone else in the hip-hop scene, but it’s likely he’ll be an influence on rappers from at least the next generation. Where he goes next is anyone’s guess, but we can be pretty confident that Thug won’t be asking anyone for permission.