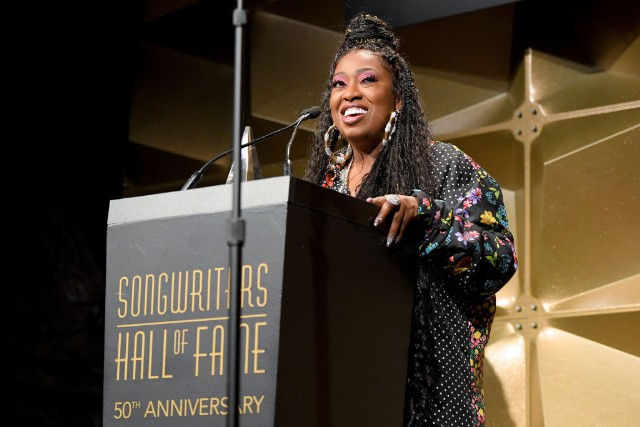 Considering that June is National Black Music History Month and it’s been almost 40 years since the world got introduced to rap music thanks to a song called “Rapper’s Delight,” it’s amazing to see how the young genre has evolved into the one of, if not the most, popular genre out right now. It’s growth has given us some of the greatest American songwriters who have pushed the culture forward by dictating what the charts consider popular based off their music. Yet as we celebrate rap’s bright future, it’s always great to honor the past and those who helped put rap music in the position that it’s in today. With her recent induction into the Songwriters Hall of Fame, who better to be honored today than Missy “Misdemeanor” Elliot, a hip hop legend who has shown that it’s better if artists create lanes for themselves instead of fighting each other just so they all can fit into one.

If you grew up in the 90’s or early 2000’s then you’ve probably grown up on Missy Elliott’s music. For the past 22 years the the Virginia rap veteran has built a career making a tremendous impact with her writing that has been felt by not only hip hop but also r&b. By selling over 30 million records and being named by Billboard as the best selling female rapper in Nielsen Music history, you can say that Missy has made a case for herself to be the third rapper, behind Jay-Z and Jermaine Dupri, and first female rapper to be inducted into the Songwriters Hall of Fame. Great artists such has Beyonce, Mariah Carey, Aaliyah, Ginuwine, Ciara, 702, Jasmine Sullivan and more have benefited from Missy sharing her pen with them. Hip hop classic such as “The Rain (Supa Dupa Fly),” “Hot Boyz” “Get Ur Freak On,” and “Work It” as well r&b jams like other like “One in a Million,” “Where My Girls At,” “So Gone,” “1, 2 Step,” “Free Yourself,” and “Need You Bad” show that Missy’s pen game knows how to put numbers on the boards.


“She who levitates. One who spits with laser beams.” – Pharrell

There’s a couple of reasons why Missy Elliott has gone on to receive acclaim from music critics throughout her music career & the most obvious is probably the combination of her talent as a writer & the production from her oldest friend & legendary hip hop producer Timothy Mosley also known as Timbaland. The fellow Virginia native has always been able to create a sound that matches Missy Elliot’s flow as a songwriter. At times his production felt as if Timbaland was beatboxing the sounds that were stored in his mind & what you got was a groovy electronic funky soulful feel that had stuttering rhythms & arrangements that were unforeseeable. These estranged sounds gave Missy Elliot’s lines more color, because while the poetry in her lyrics were simple, it was the rhythm in her raps that caught listener’s attention. The combination of the two talents matched so perfectly that music the two created felt like a party & Timbaland’s role was the human beatbox/DJ & Missy was the MC who could rock the crowd by rapping & singing. One minute the crowd could grab a partner & vibe to a digital slow jams like “Friendly Skies” & “One In a Million” or have them dancing to funky hard hitting hip hop grooves like “Sock It To Me” & Pass That Dutch.” Like Eric B & Rakim, Dr. Dre & Snoop Dogg and Havoc & Prodigy, Missy Elliot & Timbaland have gone on to be one the greatest rapper/producer duos in hip hop, but the support & creative freedom from her then label home Elektra Entertainment Group allowed Missy to be as unique as possible when writing songs.

In the middle of her interview with “OTHERtone” radio show Missy Elliot discussed the early stages of her career, saying that she only became an artist because it was the only way she could get a label deal, which was her original desire. Missy wanted to make records for other artists not for herself, which explains why you can find big name acts such as Busta Rhymes, Lil Kim, Da Brat, Ginuwine, 702, & the late great Aaliyah throughout her debut album Supa Dupa Fly, some who you would later on have hits that were written by Missy herself. She also acknowledged during the interview that the lack of fear of succeeding brought the best out of her while creating Supa Dupa Fly. Makes sense, considering that throughout the album and even her career it always seemed as if Missy went into the booth with an unbothered mindset & freestyled the first things that came to her head, especially on songs such as “Hit Em wit da Hee” and “She’s a Bitch.” However, that carefree attitude was able to blossom because of the support the hip hop artist received from then CEO of Elektra Entertainment Group Sylvia Rhone, who Missy states encouraged her to always be herself, “Sylvia was just one of those people who never asked me to change anything about me. She never asked me to drop ten pounds or make a record like this. She never did that, with me or Busta.” So what is the end result of a young, talented music artist with a nonchalant attitude of the success of an album who has the support from her label to be herself while creating music? The result is a female hip hop artist who opened the doors for the next generation to reach success by being themselves.


“I continue to disregard all of ya’ll’s opinion.” – Busta Rhymes

The end result of having a debut album produced by super producer Timbaland & having the green light from a record label to be as unique as possible ended up with Missy Elliott being well received with open arms by the hip hop community. Coming out strong with her debut single “The Rain (Supa Dupa Fly),” plus a crazy video to match directed by iconic hip hop video director Hype Williams, hip hop eagerly embraced the music that came from the groovy fun weird MC. During her interview with Sway In The Morning Missy Elliot talked about having to prove that even though she didn’t possess the criteria look of a star, she indeed had the talent & personality of one stating “You gotta think at the time everybody was in they little bathing suits and you got the big girl come in this trash bag. Everyone came with the good Indian weave and here I come with finger waves and the black gel. I was totally opposite, but I think it gave it some type of balance & it creates my own lane where it didn’t feel like I was clashing with nobody. It was like she crazy, there’s something about her that I like, but she crazy.” She was absolutely correct. Fans worldwide loved Missy’s crazy approach to music because it created more variety in hip hop & R&B. “Supa Dupa Fly” destroyed the notion that you had to have a certain image to be successful opening doors for future acts like Ludacris, Kanye West, M.I.A., A$AP Ferg, Tyler The Creator, SZA, Lizzo and many more.

The creativity that Missy Elliot put into her music has left an impact on the world that can still be felt 20 years later. Like many rappers before her, she showed that as an MC, sometimes it’s not about what you say, but how you say it, making something as simple as “Beep beep, who got the keys to the Jeep? V-r-rrrrrrrooooom” a classic hip hop line known worldwide. The veteran MC’s career has displayed how creative an artist can be when they have the freedom to be themselves. Missy Elliott being inducted into the Songwriters Hall of Fame showed that it’s better if artists create lanes for themselves instead of fighting each other just so they all can fit into one.