How Much Has Lil Durk Made From Spotify? 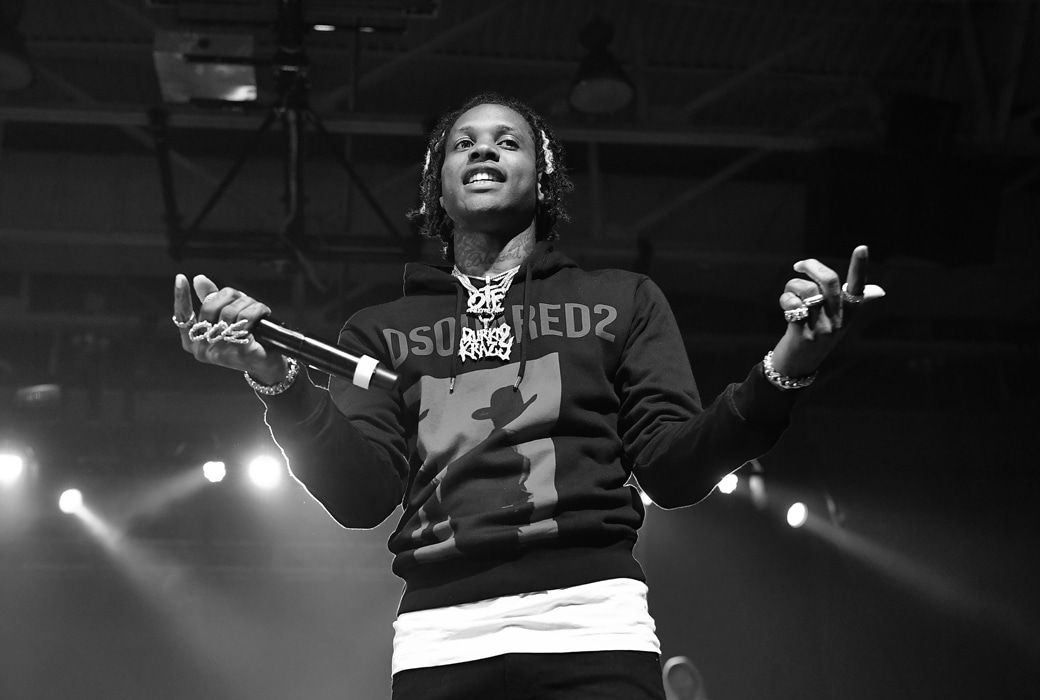 Home » Editorials » How Much Has Lil Durk Made From Spotify?

Chicago rapper Lil Durk has come a long way since first releasing his debut mixtape, I’m a Hitta, back in 2011. In the 11 years since his first mixtape, Durkio has created an extensive discography of ever-evolving sounds and garnered a faithful following of fans that have propelled the OTF boss from Englewood upstart to international rap star.

Over the course of his career, Lil Durk has earned a fortune from various sources of income, including a significant sum accumulated from the rapper’s digital streams. On Spotify, Durk’s expansive discography has netted him some impressive streaming numbers, boasting over 27,000,000 monthly listeners on the platform.

All of that might make you wonder, just how much money has Lil Durk made from Spotify?

Using the given Spotify payout rate of .00437 payout per stream, and factoring that with the industry-standard artist payout of 18%, we have approximated just how much Durkio has made from Spotify with each of his major projects.

Please remember, that this is just an estimation. Our calculations do not account for any of Lil Durk’s standalone singles, features, or instrumentals. Also, it’s entirely possible Lil Durk’s payout is different than the industry average, and this calculation does not account for any of the artist’s additional revenue streams (other digital streaming platforms, endorsements, live shows, merch, etc.).

I’m Still a Hitta is the sequel to Lil Durk’s debut mixtape, I’m a Hitta, and the first the project from the artist’s discography available to stream on Spotify. Released in April 2012, I’m Still a HItta featured Lil Reese, Fredo Santana, Trigga Black, and King Louie. The project was hosted and produced by DJ Victoriouz and DJ Sean Mac. Notably, the mixtape spawned the song “L’s (Anthem),” which became a breakout hit and received a re-release featuring French Montana.

Just six months after I’m Still a Hitta, Lil Durk released his third official mixtape, Life Aint No Joke. The 15 track mixtape was hosted by DJ Victoriouz along with DJ Moondawg. The project featured verses from Soulja Boi, French Montana, and Yo Gotti. The mixtape was also home to popular song “Mollygurl,” which is the earliest track in the artist’s Spotify catalog to reach 1,000,000 streams.

Lil Durk’s fourth official mixtape, Signed to the Streets, was released in October 2013. Executive produced by DJ Drama, Signed was the first in Durk’s mixtape series. Originally released exclusively on DatPiff, Signed to the Streets’ is home to a number of tracks that were important in Smurk’s early career including “Dis Aint What You Want” and “Bang Bros,” which have accumulated 1 and 5 million streams respectively since their addition to Spotify.

Lil Durk released his fifth mixtape, Signed to the Streets 2, in July 2014. Hosted by DJ Drama and Don Cannon, the mixtape came just months after Lil Durk was selected for XXL’s Freshmen Class of 2014.

Durk released his debut studio album, Remember My Name, in June 2015. The project featured the single, “Like Me” (ft. Jeremih), which has over 39 million streams as of today. The album sold 24,000 units during its first week, and premiered at No. 14 on the Billboard 200. Remember My Name was also Durk’s first album under Def Jam after the rapper signed a joint venture deal between his OTF collective and the record label in 2012. Notably, at this point in Lil Durk’s Spotify catalog, his average streams increase from a few hundred thousand per song to a few million.

Lil Durk’s sixth mixtape, 300 Days, 300 Nights, was his final drop of 2015. The 19-track mixtape hosted a number of features including Future, Meek Mill, Dej Loaf, the late Young Dolph, and others. The project is home to the Platinum certified DeJ Loaf assisted track “My Beyonce” which currently has over 44 million streams on Spotify.

Lil Durk 2X was the rapper’s sophomore studio album. Released in July 2016 after originally being announced as a mixtape, the album debuted at No. 29 on the Billboard 200 and sold a disappointing 12,000 units in its first week. The project was supported by the single “She Just Wanna” (ft. Ty Dolla Sign), and also included “My Beyonce” from 300 Days, 300 Nights. The album featured production from a host of prolific producers including Sonny Digital, Wheezy, Zaytoven and more.

Three months after Lil Durk 2X, Lil Durk released his seventh mixtape, They Forgot, in November 2016. The mixtape was promoted with the single, “Baller,” which was released a week before the mixtape but not actually included on the project. They Forgot boasts a number of feature verses from past collaborators and newcomers alike including BJ the Chicago Kid, Mozzy, Meek Mill, 21 Savage, Def Loaf, YFN Lucci, and Lil Reese.

Released in February 2017, Love Songs for the Streets, consists of nine tracks. It was the first of four mixtapes Durk released in 2017. Later that year, he’d drop the Lil Reese collaboration, Super Vultures, and the Tee Grizzley collaboration, Bloodas.

Released late March 2018, Just Cause Y’all Waited is Lil Durk’s twelfth official mixtape. Prior to the album’s release, Durk announced that he had completed the terms of his contract with Def Jam and would be leaving the label due to creative differences.

The tape, which was released in collaboration with EMPIRE, consists of 12 tracks with a handful of features including PartyNextDoor, Lil Baby, Ty Dolla $ign, and Gunna. The project was also preceded by five promotional singles; “Durkio Krazy,” “Crossroads,” “1(773) Vulture,” “How I Know” (ft. Lil Baby) and “Home Body” (ft. Gunna & TK Kravitz), the last of which currently has over 69,000,000 streams alone. The mixtape became Durk’s first non-album entry to land on the Billboard 200, peaking at No. 57.

In November 2017, Durk dropped Signed to the Streets 3 . It sold 26,000 units in its first week. It was Durk’s first project after signing a deal with Alamo/Interscope Record in July of the same year. The project boasts production by ATL Jack, TM88, OG Parker and more, as well as a number of features from artists like Future, Gunna, Kodak Black, and Kevin Gates. The album was preceded by three singles, “Spin the Block,” “Downfall,” and “Rockstar.” STTS3 was Durk’s first album to go Gold.

The sequel to his 2017 mixtape, Love Songs 4 the Streets 2, is the fourth studio album from Lil Durk. It was released in August 2019. Supported by four promotional singles, “Like That,” “Bougie,” “Green Light,” and “Extravagant,” the project debuted at No. 2 on the Billboard 200, and sold 44,000 album equivalent units in its first week. In addition to features from A Boogie wit da Hoodie, 21 Savage, Key Glock, Meek Mill, Nicki Minaj and the late King Von, the album features production from The Beat Bully, Boi-1da, Jahlil Beats and more.

Lil Durk’s fifth studio album, Just Cause Y’all Waited, was released in May 2020. The album debuted at No. 5 on the Billboard 200 selling 57,000 album equivalent units in its first week. The project was given a deluxe release a month later that saw the album peak at No. 2 on the Billboard 200. It’s worth mentioning that the album is home to the song “3 Headed Goat” (ft. Lil Baby & Polo G), which currently has over 200 million streams. It was the first song from Durk’s catalog to clear 100 million streams and helped Durk’s album score another Gold plaque.

The sixth studio album from Lil Durk, The Voice, was released in December 2020. The deluxe edition dropped in January 2021. The album was released on a Thursday, so it technically only qualified for one day’s worth of sales in its first week, with 23,000 units sold. However, in its second week, the album sold 66K album equivalent units for a total of 89K units sold in its first eight days.

The album is considered a tribute to late rapper King Von, who was killed two months before the album’dropped. Von is pictured with Lil Durk on The Voice’s cover art and is also featured on the song “Still Trappin’,” which currently has over 100,000,000 Spotify streams. The album cemented Durk as one of the hottest rappers in the game and became his first Platinum album.

Lil Durk’s most recent album, 7220, was released in March 2022. It was followed up by a “reloaded” version rather than a “deluxe” version a few months after. The album was supported by singles like “Pissed Me Off,” “Broadway Girls,” “AHHH HA,” and “Golden Child.” The album was Durk’s first solo project after landing on both Kanye West’s Donda and Drake’s Certified Lover Boy in 2021.

The project debuted at No. 1 on the Billboard 200 and moved over 125,000 album equivalent units in its first week—the best first week of his career. The album spawned many notable tracks including “Petty Too” (ft. Future) and ‘What Happened to Virgil” (ft. Gunna). Despite being available to stream for the shortest amount of time, Durk’s growth both as an artist and in popularity make this album’s earnings potential extremely high.

In conclusion, Lil Durk has made (approximately) over $2.3 million, just from streaming revenue for his major projects on Spotify alone.

Check out our previous article “How Much Has Post Malone Made From Spotify” here!