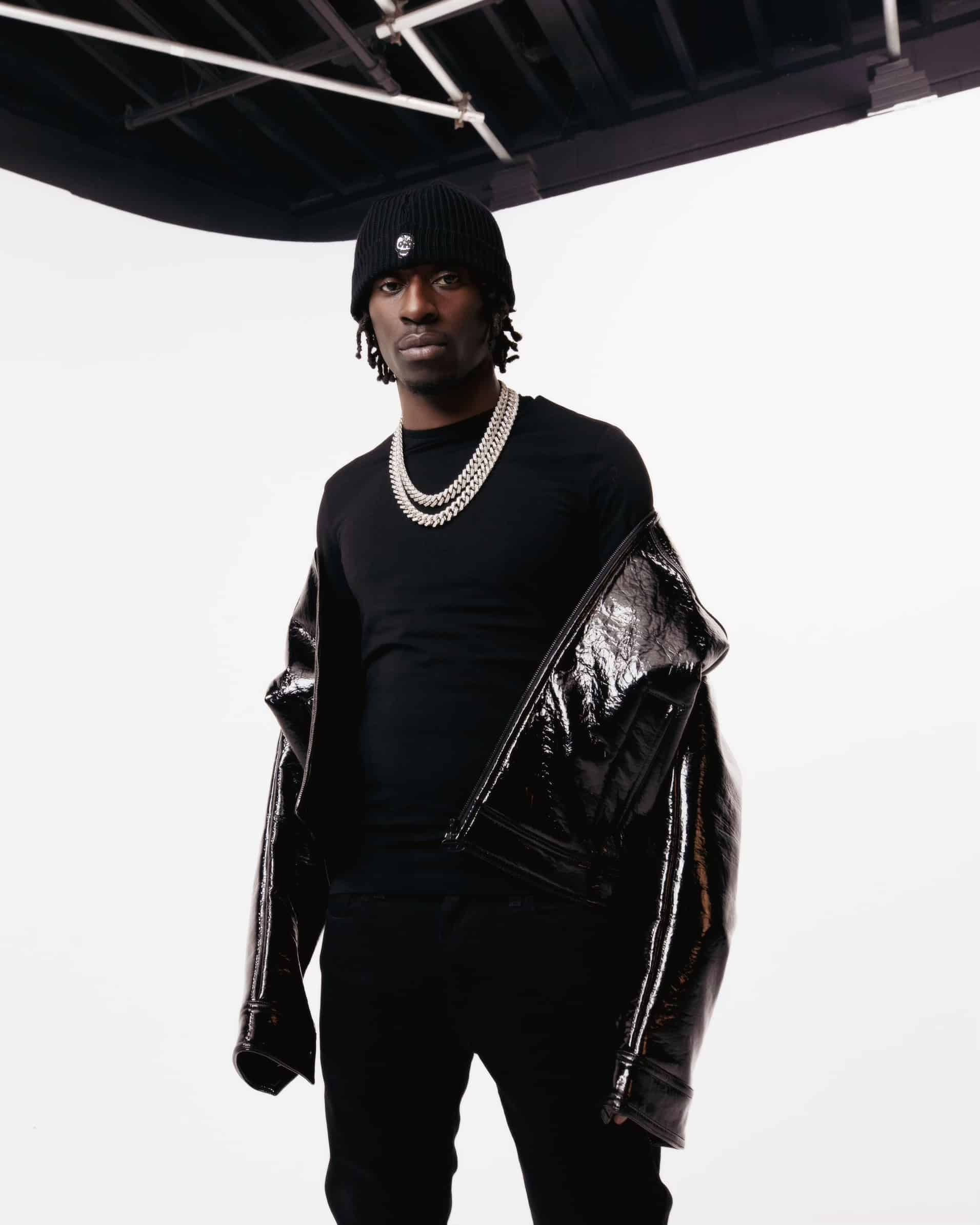 Toronto-born and -based artist Friyie greeted me recently on a video call with a clean white tee and a wide smile. Friyie, born David Afriyie Obeng to Ghanian parents, has a gentle, happy-go-lucky demeanor, but exudes confidence. Speaking charismatically of his childhood, Friyie said, “in my household, there were four boys, and we were all competitive in everything we did, we kept each other sharp. The brother senior to me, we used to always have contests making songs about things in our immediate environment,” he said. These moments clearly hold a special place in Friyie’s early memories; to this day, he’s able to recite some of these improvised songs by heart.

Friyie grew up listening to a wide range of music, including local bands he heard in church; Jamaican music at neighborhood barbecues; the likes of Tupac at the community center; and CDs from his older brother’s collection: Alicia Keys’ Songs In a Minor, Juelz Santana’s What the Game’s Been Missing!, and Lil Wayne’s Tha Carter. “I used to go to his CDs, read the decriptions, look at the album art, check out the credits. I fell in love with that,” he said. This diverse background is apparent in his music, which defies clear genre categorization – his latest release (September 2), the 7-track EP Never 2 Late, deftly moves from hard-hitting flows and 808 slides to ethereal R&B synths and inspired vocal melodies. “I feel like I’m a very diverse person. I’ve traveled a lot, I’ve lived in different areas, so I like to showcase that in my music,” he explained.

I brought up his old alias D-Money Chaser and Friyie took me back even further: “My first rap name ever was Crazy D, probably two other people know that,” he said, laughing. “That was a neighborhood thing, an older guy would bring me around saying ‘Crazy D, come rap!’– I was a kid running around, I was entertainment for the people.” He would mostly recite writtens from his brother as Crazy D, eventually gaining the confidence to write his own material and releasing his first song under the name Bong Jr. “That was probably grade 9, I uploaded a song to Facebook, and it’s crazy cause the other day I found it,” he told me. “I remember it vividly,” he said: “It was after school, some kids were doing a little rap contest. I thought to myself ‘I can do this too’, so I went to Yorkdale [mall], bought a mic, and recorded that song in my room with one of my best friends who produced the beat.” Shortly after came the name D-Money Chaser, and, at the age of 16, a mixtape named Hottest in the City Vol. 1 that generated significant local buzz.

A few years and another name change later, Friyie, at that time 22, had a breakout year in 2017. There were two major catalysts: The first was the release of his single “Money Team” that was discovered by Floyd Mayweather, now a “good friend,” and used as his press conference and walk-out music for the McGregor fight. Meeting Floyd led to a trip to Vegas and a whirlwind sequence of events including a Mike Dean meeting, a facetime with 50 Cent, and an opening performance for Cardi B at the T-Mobile Arena.

The second was the release of 6IX RISING: Toronto’s Rap Ascendance, a full-length documentary by VICE’s music division Noisey that has since recorded over 2 million views on YouTube. Friyie told me the project – which profiles a number of artists including Jazz Cartier and Pressa – came about following a pitch from his then manager, Luke, to profile the Mayweather story. That initial discussion evolved into a vision from the director, Shawny, to chronicle Toronto’s burgeoning hip-hop scene as a whole, with Friyie as a central figure. “I feel like I am Toronto,” he says. “Everything I do is from a Toronto mindset. I always try to stay authentic to the core, the reasons I fell in love with music and started to rap.”

2017 was also Friyie’s last year at York University, where he graduated with a degree in Sociology. He always knew music was his true passion, and that he would want to pursue it full-time, but he also wanted to get a degree for his parents and especially his mom. Balancing the two was not always easy – he once had to skip an exam for a SXSW performance. “The craziest thing about that doc looking back is the fact I got them to come to my graduation,” he told me.

In 2019, he released his debut album, ANF: Ain’t Nothing Free – the name of his team and release partners to this day – featuring, among others, Roddy Ricch and Tory Lanez. Since then, he has released a steady stream of music, including Never 2 Late, which was inaugurated with a release party in partnership with Amazon Music at Toronto’s Eglington Grand theater, the outside of which is where its album art was shot. As an independent artist, Friyie was debating last minute whether to spend money on marketing or the release party but he decided that he wanted to do something special and in the span of only 4-5 days before, he and his team were able to create a unique listening experience that included live paintings, pianists for the performance, an on-stage interview, and a business casual dress code.

Speaking of his new project, Friyie told me, “The title speaks to a resilient mindset. If you feel it’s never too late, that will allow you to never give up and keep pushing. When I came up with the title I was in a state where I felt like ‘shit, I’m not moving as fast as I should’, but I realized I can’t look at anybody else’s story or journey. You have to move with urgency, be consistent, be decisive, but it’s never too late.” Friyie’s two favorite songs from the project are “Cinderella” and “Brainless” for the effortless vibe and emotion that was channeled in making them, whereas “Back On Road” and “Sorry Not Sorry” will appeal to others looking for higher-energy recordings. Friyie told me about the genesis of the latter: “Funny story, I got a phone call playing Cee-lo, after I won a little money back I went to a studio session and that became ‘Sorry Not Sorry’, I realize had I not gone that day the song would never have happened.”

Friyie told me there will be three more visuals for this new EP, followed by a new full-length album in the new year, 10-15 tracks. (He also performed September 25 in Japan in front of 60,000 fans for the Mayweather exhibition fight.) According to Friyie, another theme of Never 2 Late is that “it’s never too late to join the show. It’s never too late to be a fan. I feel like we’re on the brink of something special. This release is a calling card for people to join along before things go crazy.”