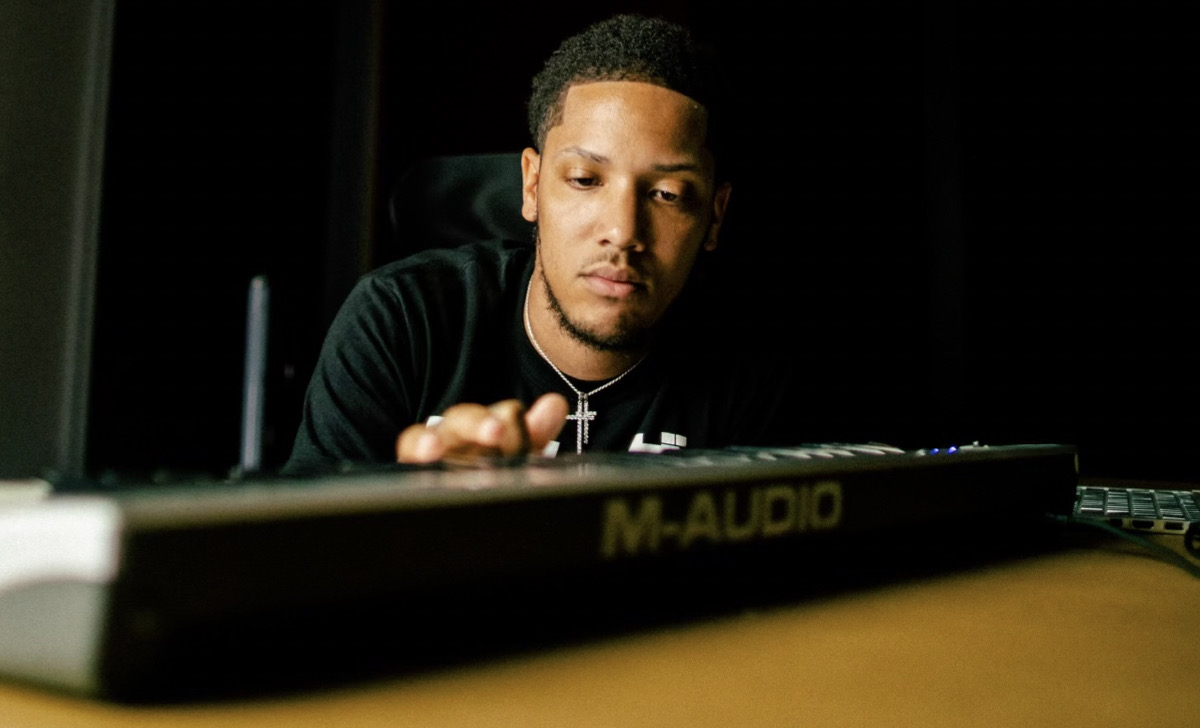 Jahlil Beats, Grammy Award Winner, father, son, philanthropist, and entrepreneur. For those that are not familiar with the name, Jahlil Beats is the pioneer of everything we know about New York sound today; Jahlil is the legendary producer behind the hit record “Hot N*gga” by Bobby Shmurda.

The 33 year old artist gave us the opportunity to sit down and have a word about his current ventures and involvement within the industry today:

What should the younger generation know about you that they might not know already?

“I just make music for the streets, you know, and that’s how a lot of my records took off. I feel like since the record “Hot N*gga” – that kinda birthed the sound for New York Drill, and that’s something I definitely want to be remembered by.”

How does that feel, knowing that you’ve influenced a whole region of music since then?

“I mean it’s beautiful. It’s crazy because like every record I’ve done, from ‘Burn’ to ‘I’m Above’ by Meek Mill, it was me just getting in and creating music. Doing what I’d like to do; taking elements from my favorite producers, and making my own sound as one. That’s how these records came about.”

What producers would you contribute as your greatest influence?

“My favorite producer is Swizz Beats, but I draw a lot of inspiration from The Neptunes, Mannie Fresh, Timbaland, Dr. Dre, Just Blaze, and Kanye West, these guys are my biggest influences.

There’s a whole bunch of them, Swizz is my #1 though… That was like the era I cam up in, Swizz was the guy, I just gravitated towards him. I just loved his energy and how distinct his sound was. I think he just came in and changed the game, and I want to always do that as well.”

How do you remain as humble as you are given the resume you have?

I try not to get in my own head and blow myself up because it could be taken away just like that. My main goal is just to make good music and pick the right artists to work with.”

So let’s run it back – how did you link up with Bobby Shmurda, and how did “Hot N*gga” come about?

“So this is the real true story about this record. I did the record with Lloyd Bank’s, at the time I was working with G-Unit heavy. I had just did this single for 50 called “Put Your Hands Up.” Then I did this record called “100 Bottles” with Yayo, then started just working heavy with G-Unit, they just loved my sound.

I actually did that record for Meek Mill, but he turned it down. We had just did “Burn,” and he said it sounded too much the same.”

“Then I sent it to Lloyd Banks and he did this record called ‘Jackpot Tour.’ He didn’t release it officially, he just put it out on twitter.

I put the beat on this instrumental mixtape, I think Bobby Shmurda and Rowdy Rebel’s people had the tape or something like that. I know they noticed my shit from the Meek Mill records and stuff like that.”

That’s how the ‘Shmoney Dance’ and the record ‘Hot N*gga’ came about.”

“They just recorded the record and I found out late – people were just tagging me in this video of him throwing the hat up. I didn’t really understand it at first – I never listened to the record. And then Kevin Durant tweeted me like, “Yo this joint is crazy.”

Then I listened to the record. Before it like really took off, I reached out to him and I was just like, ‘Yo people are fucking with the record, you can rock with it.’ Told him he can do whatever.”

“Then like 2 weeks later the song just took off. Complex had did an article talking about that this was the response to Chicago Drill Music, a new genre – and then after that it was over.

Shy Money XL reached out to me, he said he was about to sign Bobby and Rowdy and that he needed these beats ASAP. Then he bought both of the beats; ‘Hot N*gga’ and ‘Shmoney Dance,’ and the rest was history.”

Were you able to keep in contact with Bobby Shmurda while he was locked up?

“I relayed my messages to him heavy with Rowdy. I just did like 3 joints with Rowdy – he’s throwing Bobby on one of them I think. I sent a whole bunch of stuff to Bobby through his camp, I been really quiet about it. He’s definitely got stuff for me to do, you know what I mean, I think he’s just sitting back and getting back to regular life.

I’m definitely on deck though, if that’s what y’all want to know. Me and Rowdy got some crazy stuff though, I think my stuff is in the tuck.”

How does it feel seeing the sound come back around full circle in New York with acts like Pop Smoke, Sheff G, etc?

“It’s rewarding to me because when I came into the game I was striving to do that. To see that morph into what it is now is a beautiful thing, I feel like New York never really had a sound until we came in and did what we did.

I credit that to Meek Mill as well, even with records like ‘All The Way Up,’ that was a lot of our element.

It is just surreal man, at the end of the day I am just still so young. These young dudes got me feeling like an OG out here these days, and I’m not even that old. I be feeling like an old head now, it’s a culture shock sometimes.”

How did you link with Meek Mill?

“Meek was in the mixtape circuit, he was on fire in Philly. I was from PA as well and they were like the first rappers that I know of that were using YouTube as a platform to get their name out, not even dropping songs on their just freestyling.

I ended up sending him 3 beats on Myspace, and he used all of them. He got locked up right after that, he would call me all the time in jail telling me as soon as he got out we’d lock in.

Soon as he got out, we locked in and the rest was history.”

“Meek and Bobby got locked up right behind each other. They went in and it was just silence. I put all my eggs in one basket… I started to get into real-estate.”

“I bought like two blocks, bought mad residential properties, luxury apartments in Chester, PA. I got close to the mayor from all the community givebacks and stuff. I started to get into all of that heavy until my guy’s got home.

This was my plan Z, until my guys got back home, then I’d get back to it. I just thought let me fall back and build that foundation so that if this happens again, I won’t be in trouble.”

The levels of philanthropy that you have displayed is not common in this industry. What would you consider as your greatest influence for your contributions to your community?

“My manager showed me the ropes. He was a smart dude and he created a monster; in terms of real-estate I just started going crazy.

As far as the community, I always just wanted to do that. I’ve seen too many dudes from my city that have made it out and just left.

Now I feel like it’s my job to create these avenues for young dudes. That’s why I opened up Jahlil Beats Academy in high school. Teaching these young dudes how to do exactly what I did and helping them learn the business on top of that.”

What exactly is Jahlil Beats Academy?

“It’s a place where kids can learn how to make music; they’re learning how to take their music and monetize it through YouTube, SoundCloud, and other platforms; they’re learning the business side as far as publishing, mechanical royalties, and everything you really need to know as a producer.

I didn’t get these opportunities coming up. Luckily I was in the game in my early 20’s to take these L’s and learn as I go.”

Why is it so important to consistently challenge the expectations / boundaries of hip-hop?

“I think that as this younger generation, we always are looking for something fresh. We aren’t looking for the same thing over and over. We always want to be connected to something hip, something that’s different.

I’ve always understood that and that’s why I’ve never shunned artists. I’ve always wanted to be a part of something that will shift the culture and be big; whether it is through social media, whether a funny thing, street music, or whatever.”

What would you consider to be your greatest accomplishment within the music industry?

“2 things, first off winning the Grammy’s. It came about from Anderson .Paak recording the record like a year before it came out, and he just sat it there. Then Dr. Dre heard it and was like, you gotta put this shit out.

I never tried to make music for the Grammy’s. I always just did stuff that I liked to do.

I found out that we won on the way there – we was late – we had just thrown our tux’s on, and we were on our way to the Grammy’s. I found out I won, and I told my manager we turning around. We turned around and we just turnt up.

I feel like it solidified all the hardworking I put in prior to that, if I ever felt like I wasn’t that producer, now I have that validation – of producing a Grammy winning record.

Second off, “Hot N*gga,” my kids always hear that on TikTok. That and just being a cool father to my kids is the best thing.”

What do you have on the way that you’re working on?

“Right now, jumping on and seeing what Bobby and Rowdy are gonna do, that’s the first thing.

I normally don’t really jump out and promote it, I don’t really feel like that’s my goal, I’m like lowkey just doing what I do.

Definitely that, and I have a compilation album, I got Meek Mill on there, Gucci Mane on there, Nas, Rowdy Rebel, Future – I got mad people on there.

So that’s the next thing, just going out and working with my guys – having that momentum and then putting this project out.”