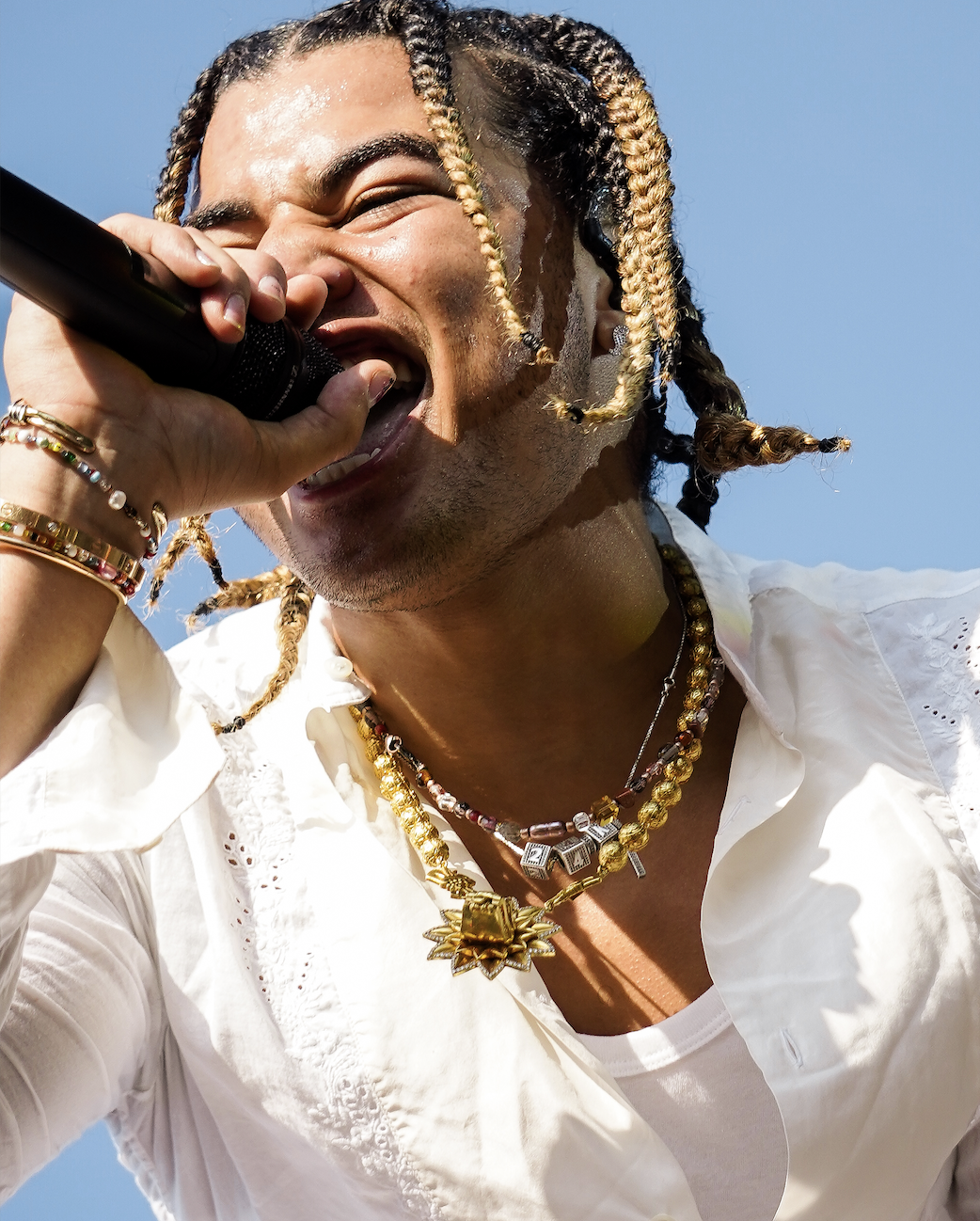 We had the opportunity to interview 24kGoldn, the 20 year old artist that’s behind the hit “Mood”, at Lyrical Lemonade’s Summer Smash Festival:

How are you feeling before your performance?

I feel great. I’m not nervous at all to be honest.

Do you have a performance day ritual?

Yeah. I like to get my hair braided. I like to drink a lot of tea. You see, my man’s raps trainer over there? We’d be doing some calf raises, get the blood flowing, get your muscles stimulated.

I mean, that’s such a broad question. Where do you want me to take this?

We heard you were in the choir when you were younger?

Wow. You do your research. Back in middle school, I did do some time in the choir.

My teacher said I had the most lovely tenor voice she had ever heard. And I don’t know, we was kind of bad in that class, too, because the main teacher got pregnant and dipped 8th grade. So we had this replacement teacher come in and no one really f***ed with her.

Do you have any siblings?

Yeah, I got a little sister. Her name is Sage.

You guys have the best names, I swear. Your parents did an amazing job.

I know, that was the best birthday present I ever got. I always tell people that

Out of the two of you, who’s the golden child?

I’m GLDN. So I’m the golden child. But I ain’t gonna lie, my sister is way smarter than me, way more athletic. She’s a way cooler version than me. I’m just trying to be like her one day.

“El Dorado” just came out. And so you have features on it. Big names, like Future, Dababy, Iann Dior, Swae Lee. How did you choose who was going to be on that?

I mean, for me, I wanted to work with people that I’ve either admired or are friends of mine, too for a long time. Actually, what I was saying was, no, it was just people that I genuinely admire. I feel like we can make cool art together or are people that are in my life and we relate different. I don’t know where Iann’s at right now, but I’ve known him since before either of us were on any s***. He used to come to college and come to the frat parties and dorm parties and s*** with me.

Speaking of college, I know you were there for a short period of time. So do you think you got your college experience?

Yes. Because everybody tells me freshman year is going to be the best year anyway. So I did my freshman year, and I got the f*** up out of there. So after that, that is just sadness and finals. And you got to get a job and s*** like that. I already found my job. I don’t need that.

Do you think you’ll ever go back, though, or no?

Maybe when I’m, like, 40. If there’s something I really want to learn, maybe, about art or something. Probably not art, but something. I don’t know.

You once tweeted that ‘at least you have good skin at the end of the day.’ What is your skin routine?

Let me find the sunlight real quick. No, I’ll be rocking with Barbara Sturm. You know Barbara Sturm? Imma put you on, right? She got this enzyme cleanser. It exfoliates and cleanses. She got a foam cleanser for more daily things. Facial cream for darker skin tones. Because I’m a black boy joy going on. And what else I use? I use the Vitamin C serum. And then if you get a pimple, I throw a little star face sticker on and it’s all good.

When you were in the making of “Mood” did you know that it was going to blow up?

No, we did not even try to make a song that day. Honestly, we were just turning up and being bored in Corona. And Omer plays the guitar a little, and I’m playing Call of Duty with Iann, and I just started singing because I be singing randomly, and he was like, “oh, this is actually fire.” And now we got a billion streams. So cool.

We heard that all summer long. It was everywhere. Everywhere.

It was weird as f*** for me, though, because I didn’t know. Obviously, you look at Spotify, you see the numbers. But I didn’t know if people was really listening to my s*** because everyone was inside. It was weird, but it’s good to be out here and perform and have people singing that s*** back to you.

No. I listened to my songs a lot before they come out. And then when they come out, I usually get a little bit tired of them. But when they blow up, it brings new life back into it.

I know you play Call of Duty, do you play video games a lot?

I like to play Super Smash Bros. I like to play Call of Duty. Big 2K guy. If anybody wants to get their money taken by the Denver Nuggets, you could talk to me. Holler at me.

Do you play GTA at all?

Yeah. Back in the day, I used to play a lot.

What’s the most embarrassing thing that’s ever happened to you?

My first ever Rolling Loud performance, I think. It was at the Coliseum, and it was a day “Valentino” came out, so before the world knew who I was and my music and s*** like that. So the way they had to organize was there’s a stage somewhere. And then there’s a barrier between the stage and VIP. And then behind VIP, GA, right?

But because I was performing at 12:30 in the morning, it’s not packed as it is going to be now.

So the whole VIP section was empty, and I was just feeling like, “Damn, this is mad awkward.”

They’re over there and I’m all the way over here. So I jumped over the railing in VIP, but my pants were sagging too low, and I fell a little bit. So now I wear a belt.

Your parents are fashion models. Is that why you got into it?

Yeah, because I was a kid and they were like, “well, might as well get some bread off this while you’re cute and young.” So I did a little commercials and acting and modeling s*** like that.

Which commercials? What was your favorite one?

My favorite one out of everything was the Blue Diamond almond commercial because we got to shoot it at Six Flags, right? After we finished shooting it they just let us ride the roller coasters there all day and just f*** around. So shout out Blue Diamond almonds. Shout out Six Flags.

You’re not afraid of heights or anything then?

What is your biggest fear?

Not living up to my potential. Very existential.

How did you come up with Valentino?

So I’d go over YouTube beats for hours and hours and hours, just trying to find the right one, because I also didn’t know any producers that made the type of sound I wanted to make.

Normally, back then, I would just have an idea for a song, and it was “I don’t want a valentine, I just want Valentino.” I would look for beats until I found one that fit that and just try different s*** to it. And then I just poured out my soul and then I took it to Flow, who was a studio I was going to back in SF, made the song, and I would just tease it in my high school, on the internet, all this different s***, on the old No Jumper and the Cuff Boys live stream and s*** like that. I held onto that song for a year and it took two years for me writing it for it to blow up. That was a good lesson to me ’cause it just shows that good music lasts forever.