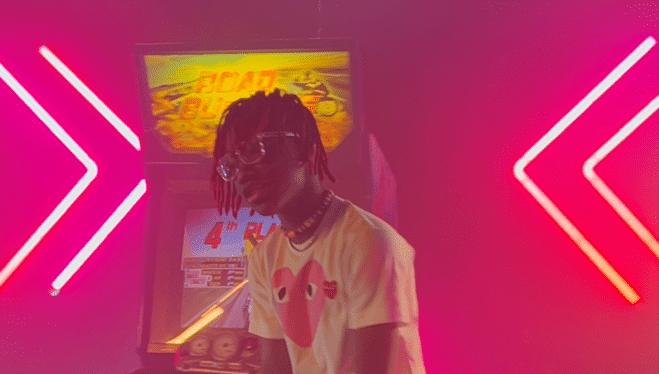 YNW BSlime is an American multi-genre creating artist from out of Gifford, Florida, the youngest member of the YNW hip-hop collective, and also the younger brother of rapper YNW Melly. Despite being only 14 (at the time of this interview), the young artist has had a very successful career. First appearing on the scene in 2020, BSlime has created an ever-growing discography of genre-bending sounds and amassed a following of loyal listeners and fans.

We got the chance to interview YNW BSlime right after the release of his newest single, “Valenslime”.

How did you come up with the name “B Slime”?

I actually didn’t, its just something that kind of happened. My name is Brandon, so my nickname has pretty much as always just been “B”. Then one day I was hanging out with my brother and his friend, and he just started adding “slime” to the end of it. Thinking back it’s funny, because I remember thinking this makes no sense, but from that day on it kind of just stuck. So yeah, really he gave it to me.

When did you first decide to start making music, and what inspired you to do so?

When I first started I was just doing it for fun. You know I saw my brother blow up, but I didn’t actually have any real intention of making a career out of it. People don’t take you seriously when you’re really young like I was. I figured maybe this would get a few views, people clicking on it like “oh this is Melly’s brother”, but suddenly it seemed like everything I would put out would actually get a pretty good response. So, I just started making more and more and here I am now, it wasn’t ever like a big decision, but definitely something I put more energy toward when it started getting attention.

Who or what would you list as your top three musical influences?

I’ve got to say Travis [Scott], just the energy that he puts into his music is so crazy. So yeah, I like that, and his drums are crazy too. Then I got to say X. Because I grew up listening to X and that was really what I liked. And then obviously my Brother, he’s probably the biggest, because he’s my brother.

Last month you did a collab with Kidd G on “Left Me”, an unexpected, but very welcome country style hit. How do you feel about making music that audiences may not see as hip-hop/rap.

I think that’s kind of a problem, the fact that people will judge you off a few songs. I try not to just make one type of music, because its like there’s more out there. I listen to and want to make different kinds of music. So yeah, I guess back to your question, I want to be seen as an artist not just a rapper.

Honestly, for me at least, just rap is kind of simple. Not to hate, but lyrics about sex, drugs, and guns are overplayed. As I’ve grown and progressed in my music I’ve branched out and I want to make more pop-style music and other types too, I think it’s a little harder and its what I think a lot more young people are listening to today.

Now that you have had some experience in the industry, Who was your favorite artist to work with? Who haven’t you gotten a chance to work with yet would you like to work in the future

I haven’t actually really gotten the chance to work with anyone yet. Like, sit down in the studio, write, record, all of that. I haven’t done it with anyone really. When I started making music and gaining traction, we were all in lockdown. So, studios were closed and nobody was going anywhere, so I was just making music in my room pretty much. When I did do a song with a feature or something I was still in my room. I would watch all these features come in and go out, but I still never got the chance to meet a lot of them in person.

And then who would I work with? I would probably say Travis Scott. Yeah. But not like on a feature, I want to just be in the studio and do ad-libs or background vocals cause those always go hard in his tracks.

You have clearly been working hard, dropping two singles as a solo artist and appearing on two more singles in collaboration with other artists since just the beginning of 2022. Should fans be expecting a lot of releases from you in the coming year?

That’s kind of a wild question. Now all my school is online, which is good. It’s easy and I can do it from home, but before it was hectic. Trying to do [physical] school and make music at the same time meant every day I would; wake up, go to school, finish school, go to the studio, go home, sleep for school, wake up, school, shoot a video, sleep for school, and so on. Plus when I was in school I was starting to get recognized, so kids would run up to me with their phones in my face and just be like “yooo BSlime goes to my school” and stuff like that. Which was annoying, so now school and recording is easier

What does the typical creative process of a song look like for you? Where do you start and where do you go from there?

When I first started, I wasn’t even really writing. I’d pretty much hear a beat and find a flow then freestyle a few lines and then write them down and that’d be a bar and then I’d just do that until I had a song more or less. But as I started to grow in my music more I started to write and work with writers and its way better now. Like instead of just bar after bar, when I write I think about the concepts in each verse and how they relate to the hook and to each other part. Basically, asking myself what am I talking about in each part of the song. Which is a way better format because it also makes shooting the videos easier.

What is the one thing you want fans to know about YNW Bslime, that you think the majority do not know?

If I say I’m about to go on [Instagram] Live, I’m probably not.

What is the impression of you that you want fans to be left with after listening to your music?

I want them to be inspired, I want people to be able to look at me and be like “he’s only 14, but he’s making good music. I can do that too, I can do whatever it is I want to regardless of how old or young I am. In my mind it doesn’t matter if you’re 90 or 10 if you want to do something – especially make music – you can do it.