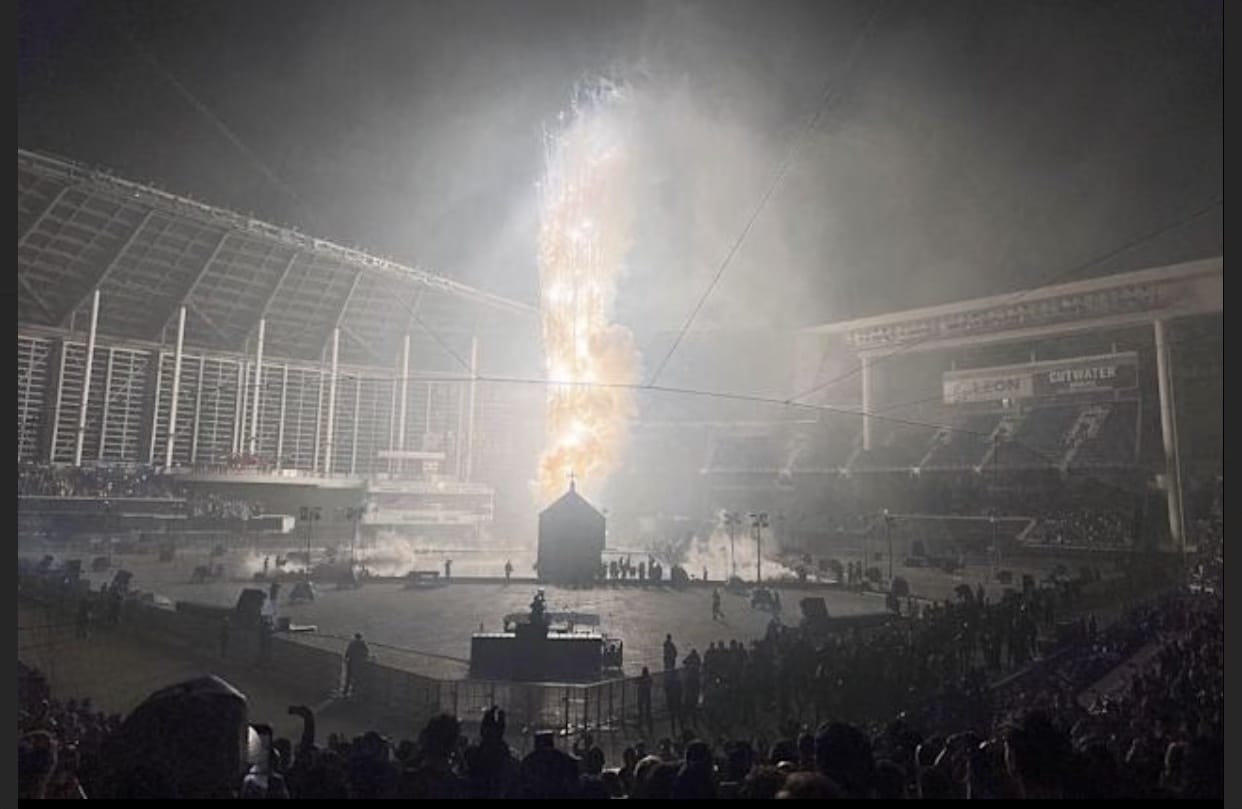 On a palindromic Tuesday – the second day of the week, on the 22nd day of February, 2022 – number 2 was on the minds of many as eyes looked to the skies above Miami and below to LoanDepot stadium where Kanye West hosted a listening “experience” for Donda 2. Planet Pluto was coming into a planetary alignment unseen since the approximate founding of the United States 248 years ago, something that Kanye was obviously aware.

Besides an actual simulation of Pluto burning on the set, there were plenty of signs that Kanye knew the astrological phenomenon was occurring and its supposed significance. According to the U.S. Sun, many believe that Pluto’s return represents rebirth – “…major shifts in finance, prosperity and leadership” – and because the phenomenon was directly related to the birth of United States, politics were among the things on Ye’s mind.

Audio of Kamala Harris exclaiming, “We did it, we did it, Joe!” from her congratulatory phone call to President Biden on November 7, 2020 was utilized by West during the event, according to Fox News. It is unclear if the stunt was meant to praise or mock the Biden Whitehouse, given Kanye’s previous association with former President Trump, but the soundbite fit nicely into the overall theme of second chances.

Ye’s album Donda was dedicated to his mother after her death, and it makes sense that the follow-up album of the same name would signal a possible new chapter in the rapper’s life – a new stage in the grieving process or maybe an opportunity for healing. His childhood house burned in the spectacle as dancers in black outfits waded in a pool that surrounded the structure.

But Kanye still seems unable to move on from other things, most notably his marriage to his estranged wife Kim Kardashian. Ye sampled Kim’s voice, referring to her soon-to-be ex-husband as “the greatest rapper of all time” and the “richest black man in America.” West also did not stray from a recently released, infamous lyric about beating Kim’s boyfriend Pete Davidson’s “ass” on the song “Eazy” during the performance, according to NME.

Also in concert with keeping old controversies alive was a repeat performance of “Jail 2” featuring Da Baby and Marylin Manson, the second of which has been accused of sex crimes against women. The first performances of the song during Kanye’s original listening events for “Donda” created a big stir, but Ye had no trouble doubling down on Tuesday.

However, appearances by a wave of additional superstars, including Jack Harlow, Pusha T, Migos and Future may have overshadowed some of Kanye’s more controversial, artistic choices – such as starting the show an hour and 1/2 late – and some things that could not be helped like the audio difficulties that plagued part of the night.

In the aftermath of the Miami listening experience, it is unclear if this follow-up album is near completion or when it will be released, stem player or not. Regardless, Kanye has once again proven his uncanny knack for stirring enormous attention towards his new musical releases. This album and the lead-up to its drop are going to make this master of marketing millions.