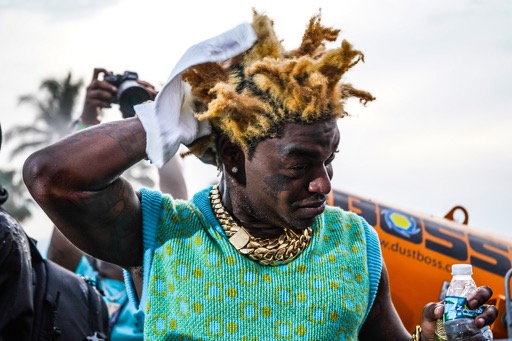 Kodak Black was shot in the leg at a Justin Bieber afterparty early Saturday morning (February 12) when a fight broke out in front of The Nice Guy club in Los Angeles. Drake, Kendall Jenner, Khloe Kardashain, Tobey Maguire and Leo Dicaprio were all in attendance, but it was when a fight broke out in the proximity of Kodak and two other famous rappers that the night took a turn for the worse.

Reportedly, Lil Baby, Gunna and Kodak were seen casually enjoying themselves in the street in front of the club when a fight broke out. Kodak Black allegedly threw a punch in the melee, and gunshots are audible in a video provided by TMZ. Kodak was hit in the leg with a bullet and transported to the hospital. He was released today from the hospital, seen using a walker to get to his SUV, surrounded by a mass of bodyguards, according to TMZ. TMZ also released a video of Kodak’s exit.

Law enforcement reported that 10 shots were fired in total in the altercation, injuring Kodak and 3 others, all of whom are in stable condition.

Kodak’s camp claims that the rapper threw a punch at the shooter in order to help a friend who was being attacked.