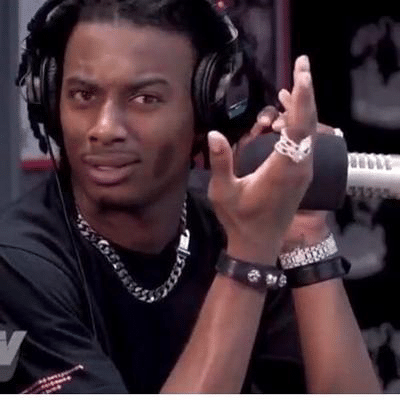 Whether the victim of cyber hacking or a man clamoring to save face, Playboi Carti was forced to respond to a torrent of backlash concerning the Narcissist merchandise collection from his online store, a release that the rapper has been hyping on social media, according to HipHopDX.

On Monday, Carti posted on Instagram a head-to-toe profile picture of himself in draping, all-black garments with the caption, “NARCISSIST 09/13/21.” The post created intrigue but was somewhat confusing, leaving many followers speculating as to what exactly the release would include. Some even believed that it would be a new album.

But when Playboi Carti’s online store finally updated, fans were shocked to learn that the racing inspired collection included a motorcycle helmet with an absurd $5,000 price tag. To make matters worse, user @the.thinkings observantly called attention to what appeared to be the exact photo of an identical Chinese motorcycle helmet priced at $29.

“Carti really said let’s do a $29 Chinese motorcycle helmet with a flat logo photoshopped on top for $5k fuck them kids,” he smirked. The same user also noticed a $40 ski mask in the collection that retailed for $.045 on a Chinese website.

In response Carti said, “The website is hacked. The [reference] folder was posted live. Never approved any clothing/etc.”

It is unclear what his response means for fans who have already purchased items. Whether or not the rapper will issue refunds remains to be seen.