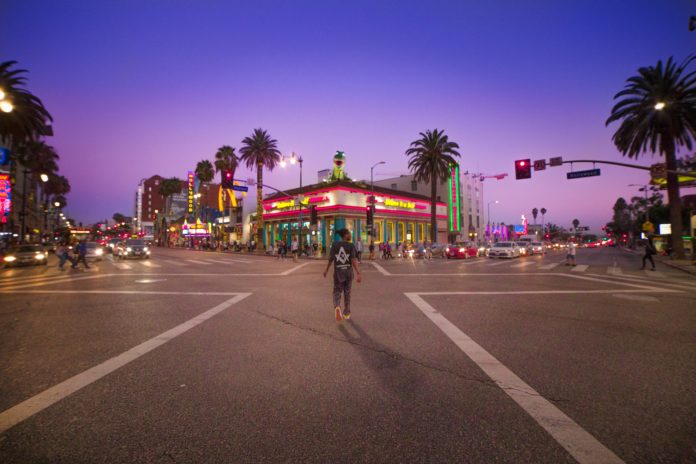 Los Angeles gangster rapper YG hit the town Sunday to express his right to freedom of speech. The musician made his way to the famous intersection at Hollywood and Highland and stood amongst a huge crowd while music was played through loudspeakers and chants were shouted. The protests are of course in reference to the recent death of George Floyd, Breonna Taylor, and Ahmaud Arbery. The star made his way to a stage of sorts and danced his way through a few of his songs.

The protest featured YG playing his new hit song, “FTP.” The song was made in response to the murder of George Floyd. It is an anti establish anti-police brutality anthem for the times. The song is one of many anti-establishment songs that the gangster rapper has on his catalog. One such song is the famous “FDT.” The song references the President of the United States and vocalizes YG’s dislike. The rapper is joined by the late great Nipsey Hussle as the two were closely associated and were good friends. YG has since taken up the mantle as one of  Los Angeles’s leading voices.

The gangster rapper had originally planned to hold a march in the greater Los Angeles area but the plans were shortly foiled. What began as a well-intended impromptu march was canceled. YG posted on Twitter, saying, “LA meet me. Hollywood Blvd & Vine tomorrow Tuesday 12 noon BLM – George Floyd. All positive vibes tomorrow. No looting!” but was shortly canceled. YG was informed by relevant authorities that the march might become unsafe “and that people could get hurt or shot.” Instead, he proposed a makeup date where he would march and would organize with relevant Black Lives Matter leadership.

The march was rescheduled for Sunday and it was met with massive success. An estimated 50,000 people attended the protest in opposition to police brutality. The crowd erupted when YG played his famous “FTP.” Videos of the march are all over social media today as the crowd was one of the biggest across the world. YG took to Instagram to discuss the success of the protest.

For anyone out there talking I don’t question your advocacy and don’t think you should question mine.

See you gotta understand that a lot of people out there they see me as a N*gga. They don’t see the black proud man. They see a kid from Bompton and they expect violence. They hear FTP and they think I’m gonna come and burn my city. So we showed up and did it right. We proved them wrong. The real story here is me and Black Lives Matter brought out 50,000 people today to peacefully protest and unite for change. I wanted to document that so when they hear this song and think we are reckless and violent they see a peaceful protest of all different people coming together for a common cause. That is history. That is breaking down these stereotypes on our people and our neighborhoods.

All of us protesting are on the same side here..instead of questioning each other’s activism we should be directing that energy at the cops and the government and helping to create the change we want to see. Stay focused and stop that social media judgment without knowing facts and hurting a cause we all a part of. We got a real enemy and it ain’t each other. On my momma!

The post speaks to bias and its effects on his public image. Because of his gangster rap persona, many might jump to conclusions about his intentions. But YG is using his influence and sway amongst his fans to encourage them to protest in a peaceful and nonviolent way. The support of the movement is vast and the power it has is yet to be seen. With the brand of unity that YG helped promote, the sky is the limit.