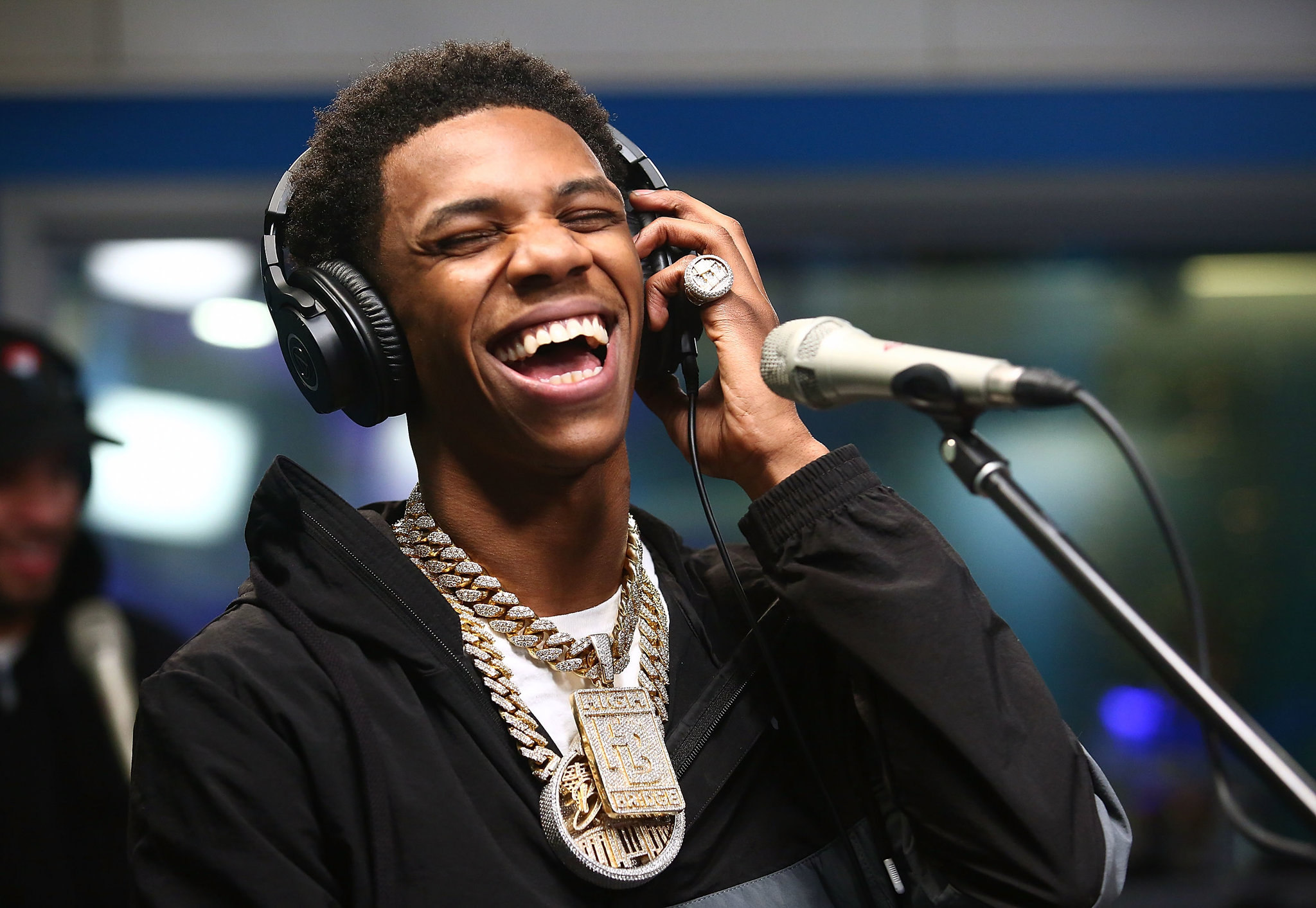 A Boogie Wit Da Hoodie is something of an enigma in hip-hop. Despite having a number one album and a stockpile of radio hits, the rapper keeps a low profile and has avoided tabloid covers, internecine hip-hop beefs, and extravagant flexing.

And while the young rapper may have gotten his start inauspiciously – as just another face in the sea of would-be SoundCloud rappers – he’s now an influence on the new cats rising up from anonymity. But who is he, and what drives him to continue being such a dominant force in hip-hop?

The rapper known as A Boogie Wit Da Hoodie was born Artist Julius Dubose on December 6, 1995 in the Bronx neighborhood of Highbridge. He started rapping at the age of 12, taking influence from seminal influences Kanye West and 50 Cent.

By junior high school, he’d found a community and was performing in cyphers at lunchtime, making use of rhymes he kept stored in a large notebook. He was a diligent student of the game, a quiet kid who didn’t really stick out from the crowd but who had some serious talents to back up his low-key demeanor.

The Boogie Wit Da Hoodie monitor came from a reference to a character in Paid in Full and from the fact that he always wore a hoodie. And despite being a quiet kid in school, he was apt to get into trouble. After getting caught for selling weed and narcotics, his parents sent him to Florida as punishment. Here he would finish school and graduate from the Performance-based Preparatory Academy in Fort Pierce.

But thanks to earlier crimes, the period after his graduation would leave him under house arrest. While the circumstances may have not been ideal, they were a prolific period of creativity for Dubose. Here, he continued to write rhymes diligently and even transformed his apartment into a de facto recording studio.

He’d continue to work on his raps while supporting himself with pizza delivery and construction work.

Building Up the Skills

But it quickly became apparent that the facilities in Dubose’s makeshift apartment couldn’t really keep pace with his needs.

A Florida local named Myster Whyte would end up producing Dubose’s first track for SoundCloud when the rapper was only 19, but he was critical of Dubose’s rhythm and flow. He hooked up Dubose with a trainer to help him exercise and expand his skills and also introduced the young rapper to the inside of a professional studio. “It was magic,” said A Boogie Wit Da Hoodie, who had until then largely been relying on phones to record his music.

Sick of trying to make beats in between the demands of more mundane day jobs, Dubose decided to move back to New York to try and go full-time with the rap game in 2015, and he quickly began to establish a name for himself back in the Bronx. Here he connected with fellow rappers Quincy “QP” Acheampong, Don Q, and Bubba to form Highbridge the Label named after their home neighborhood. They also established a studio for recording together.

Boogie’s first mixtape, entitled Artist, was both a reference to his given name and his first real breakout success. After an initial release on Highbridge the Label, Artist got some serious play on local radio. “My Shit” was a summertime hit, and it got the attention of Atlantic who okayed the full-length album for wide release.

It was a smart move too. With the extended reach of Atlantic, the mixtape went platinum.

Artist, written in the wake of a breakup, was a deeply personal work – but Dubose would go on to demonstrate that he had also had a talent for collaboration in the months that followed his first mixtape’s release. Highbridge the Label: The Takeover Vol.1 was made in conjunction with fellow label founder Don Q and was as much a showcase for Highbridge as it was for Don Q and Boogie. It would get wide distribution thanks to a deal with Atlantic Records.

Ultimately, Dubose wouldn’t need the publicity of a collab mixtape. The success of Artist earned him a position on Forbes’ list of the best up-and-coming rappers and three opportunities opening for Future and Drake’s Summer 16 Tour. And at the BET Music Awards, he’d appear in a cypher with members of his crew like Don Q and Russ.

In the year that followed, Boogie would find himself highlighted in the annual Freshman Class feature run by XXL. That was largely thanks to the drop of his first EP – TBA. Rolling Stone ranked TBA on its list of the best 20 rap albums of the year. Boogie was a rising star with a solid record label relationship and praise from both his influences and his peers, and he had yet to drop a full album. Fortunately, TBA would just be an appetizer to that big drop.

By the time Boogie was prepping in the studio for his first full album, he already had the admiration of critics, the sales numbers to earn him creative control, and the sort of prestige that could draw in a huge number of guest stars.

He took advantage of the opportunity as much as possible during the creation of The Bigger Artist. Kodak Black, Trey Songz, Chris Brown, 21 Savage, YoungBoy NBA, Robin Thicke, and PnB Rock all entered the studio to work with him.

The Bigger Artist was released on September 29, 2017 to praise from critics. While earlier releases established who Boogie was, The Bigger Artist revealed the full sweep of his influence and explored that balance between the swagger of Artist’s wide-ranging influences and the swagger of his Boogie persona. A song dedicated to a fan who died in one of his concerts opened up a level of sensitivity not always seen in the genre, and Boogie continued to mix complex melodies with boasts. Influences came as far and wide as Lauryn Hill and Maroon 5, and piano dominated throughout roughly half of the 15 songs.

The Bigger Artist wouldn’t be Boogie’s greatest success, but it would chart fourth in the US Billboard Top 200. And while the physical sales of the album were enough to be a mild joke in the industry, it would be a smash in digital sales – turning into one of the most downloaded albums of the year.

But most importantly, it established Boogie as more than just a one-trick pony and demonstrated a willingness – and perhaps a need – to evolve and change his music with each major release.

Tracks Listed on The Bigger Artist

Becoming an Influence and Hoodie SZN

Boogie would enter the studio to work on his sophomore album almost immediately, and in doing so, he’d essentially go off the map for a while. Because while Boogie may have only been on the scene for a few years, his melodic beats and auto-tune mix of rhyming and singing had taken the New York hip-hop scene by storm.

A number of imitators would rise up in the wake of Artist, to an extent that Boogie himself commented on it. On Twitter, he stated, “Keep on tryna sound like me without showing love and Ima start to sue ya.”

So when Boogie went into the studio for his second full album, he did so with an understanding of who he wanted to be and how he wanted to express his influences. In the public eye, Artist essentially fell off the map for the better part of a year.

Apart from appearances in 2018 on 6ix9ine’s single’s “Keke” and “Waka”, he didn’t even appear in any notable collaborations. He admitted later that he struggled with the album for a long time before its release. It would ultimately take him over a year to produce Hoodie SZN. The single “Look Back At It” was released on December 7 and would be followed by the full album two weeks later.

Hoodie SZN played well with fans. Four of the album’s songs charted on the Billboard Hot 100, allowing it to peak at a number one position. It also hit hard with digital streaming – becoming one of the most listened to albums of the year. Critical reception was positive overall but a little more muted than some of Hoodie’s earlier work.

The understanding among some was that he hadn’t really expanded beyond his comfort zone and that the frequent number of collaborative efforts weakened the core strength of his work as an artist.

Some critics may have not liked the abundance of collaborations on Hoodie SZN, but that didn’t stop Artist from doubling down on guest appearances. He appeared on over 20 songs in 2019, and the breadth of the talent he worked with was admirable.

But it wouldn’t signify an overall change in his style or his attitudes. His next album would go back to stylings he knew worked: a lyrical flow that emphasizes singing over rapping and a cool but relatable approach to heartbreak and breakups.

Artist 2.0 was released on Valentine’s Day of 2020, as both a tribute to Artist’s daughter’s birthday and to commemorate the release of the original Artist. It continued his tendency to bring in a variety of guest stars, and the lineup this time included Young Thug, Khalid, and daBaby. Like his prior two albums, it would hit the top ten, charting at second on the Billboard Top 100.

A Boogie Wit Da Hoodie has talked about how he wants the world to merely know him by his given name: Artist – along with all the implications that implies. He’s also talked about the “mediocrity” of much of his work, commenting on how he can churn out hits without a second thought. He’s definitely got a hint for the latter: creating reliable radio standards with consistency, and managing to adapt to suit the needs of a variety of different collaborative performers.

And there’s no doubt that Boogie has changed the game, at least temporarily.

He’s practically launched a whole subgenre of funky crooning auto-tune rappers who will likely come into their own. But whether or not Artist develops into the artist he wants to be or continues with what he knows works, chances are that he’ll continue to churn out songs with frequency.

The rapper may be soft-spoken in his private life, but he’s prolific in his artistic output.