How Old Is Miley Cyrus? 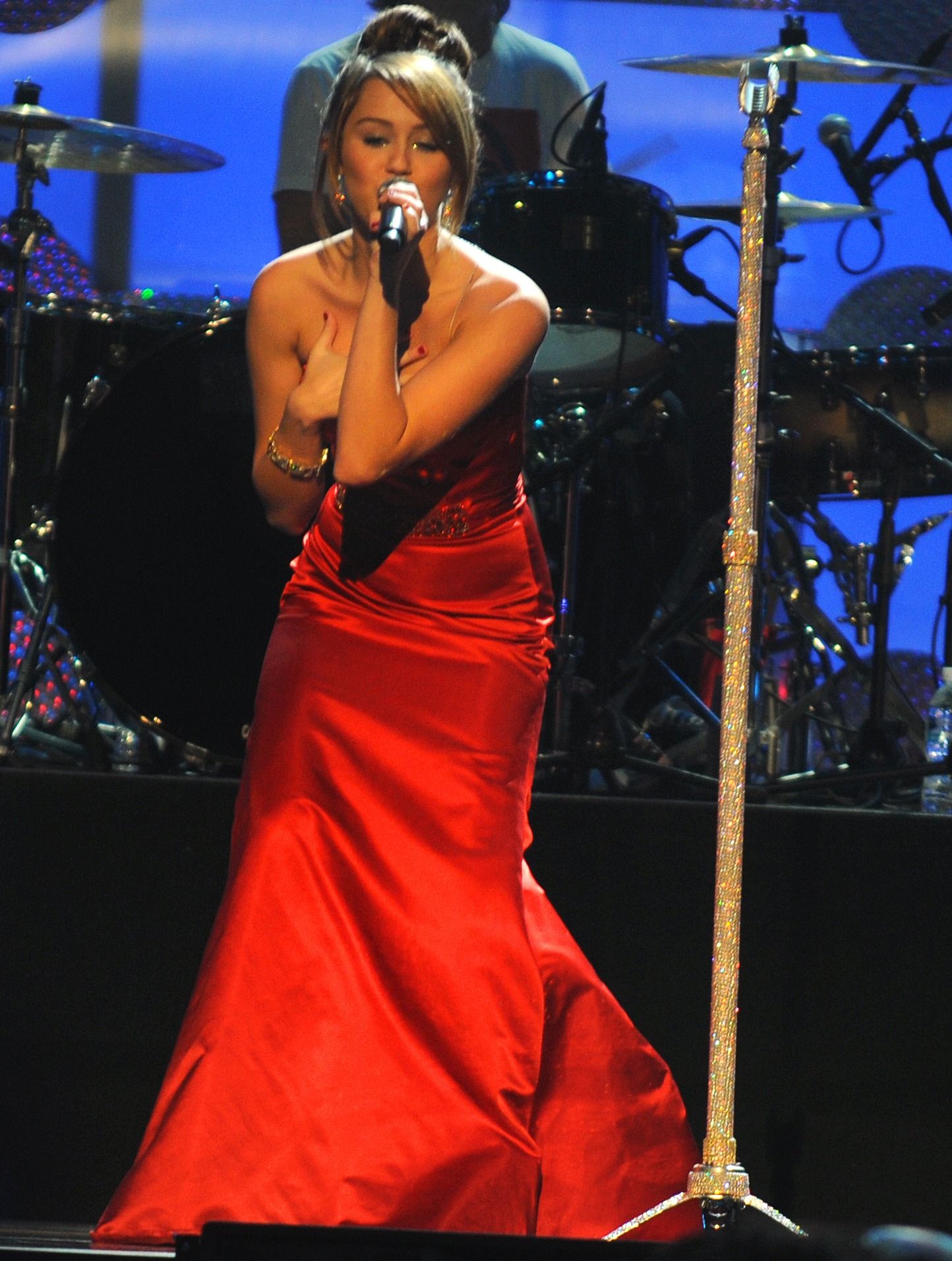 Home » Too Short » How Old Is Miley Cyrus?

Miley Ray Cyrus, also known as Hannah Montana, is a popular American singer, actress, and songwriter. Her music is complex, and it has numerous influences such as pop, hip-hop, and country-pop. This celebrity leads a controversial lifestyle that many might consider eccentric. But how old is Miley Cyrus, and what are other details regarding her life that are worthy of being known?

Miley’s real name is Destiny Hope Cyrus. She was born in Tennessee in 1992. She is a successful artist, and her career began as a child star. Her father is Billy Ray Cyrus, a well-known country music singer. Her mother’s name is Tish Cyrus. Miley’s fame went through the roof after she was featured in the Hannah Montana series, which was a popular Disney Channel TV show featured between 2006 and 2011. She also starred in Hannah Montana: The Movie in 2009.

How Old Is Miley Cyrus?

Miley is now 27 years old. She is a young and successful star with her whole life ahead of her. She is a strong and ambitious Sagittarius, born on the 23rd of November, 1992. Miley is Destiny Hope’s nickname that her parents came up with. They used to call her Smiley when she was little due to the fact that she was always smiling.

In 2008, the pop star decided to legally change her name. She chose Miley Ray Cyrus to remember her childhood. Her middle name is a tribute to her grandfather.

One interesting thing about Miley is that all her siblings from her mother’s side are established, entertainers. Miley’s mother has two other children from a previous relationship: Trace and Brandi. Trace is 31 years old and is a singer and guitarist while Brandy is an actress, DJ, singer, and TV host, and she is 32 years old.

After Miley’s birth, her parents had two other kids together: Noah and Braison. Noah Cyrus is a singer and songwriter while Braison, who’s 26, is an actor.

How Old Was Miley Cyrus When She Starred in Hannah Montana?

She gained stardom at a very young age. Miley was only 12 years old when she got the lead role in Hannah Montana TV series as Miley Stewart. The show’s producers were reluctant at first because Miley was so young and small, but they changed their minds because they were persuaded by Miley’s acting and singing skills. In the Hannah Montana era, she released popular songs like Best of Both Worlds, Party in the U.S.A., and Ordinary Girl.

According to the RapTV web site, Miley’s biggest inspiration is Elvis Presley. She also has other favorite artists, and she looks up to them: Madonna, Dolly Parton (who is also Miley’s godmother), Lil Kim, Lana Del Rey, One Republic, Shania Twain, and others.

Since her musical debut, the public perceives Miley’s songs as mostly pop. After playing the role of Hannah Montana, she released songs with both bubblegum pop and pop-rock vibes. However, the pop star truly wanted to distance herself from this sound with her 2008 Breakout studio album. In this project, she experimented with numerous genres.

Cyrus has a mezzo-soprano vocal range, but RapTV says that certain music experts described her voice as being an alto. Either way, we can all distinguish the Nashville country singer “twang” in her singing voice as well as in her speech. It is that particular element that makes her stand out.

Critics also noted that Cyrus enjoys playing with other influences such as hip hop, electropop, and synthpop.

From an innocent child star, Miley shifted to a shocking and sexy pop star. She changed her entire look and the way she dressed. Her moves on the stage are still considered by many as explicit or inappropriate.

But there’s one thing we like about her, besides her voice and talent: her laid back attitude. She looks so confident in her own skin that I am sure she couldn’t care less about what people who criticize her think.

At first, she was a Disney Princess. Then, she grew up and became the Queen of Twerking. Both Smilers (that’s how she calls her fans) and critics were captivated by her bold appearances.

At first, Miley displayed a sweet innocent look embellished by tank tops, donning aviators, and short shorts. She was a young pop singer who taught thousands of pre-teens how to daydream. Her glammed-up outfits were completed by a headset microphone, and the way she acted made us feel like life was easy and fun.

By 2010, Miley was taking the musical world by storm with her upgraded look: eyeliner, rebel hairdo, sexy dresses, and catchy songs. By then, she had definitely left Disney’s nest behind. In that same year, she met Liam Hemsworth, who she became engaged with and later on, married.

Featuring a blonde pixie crop and armed with a new recording contract, Miley launched We Can’t Stop off her album Bangerz, which shortly became a catchy summer anthem. This song was the artist’s first UK number 1. It was a blast on VEVO, where it reached 100 million views.

Many premieres came with this song because, in the video, it was where Miley first did her famous twerking.

She also got a lot of attention for her performance of Blurred Lines with Robin Thicke at the 2013 VMAs.

After the twerk-tastic Miley, we saw a heartbroken image of her when Wrecking Ball was released. It topped the Billboard Hot 100 chart for three weeks in a row. Despite the song’s sexy setting and an almost naked Miley, the entire vibe was really emotional and cathartic at the same time.

After this period, Miley showed us her country origins by singing “Jolene” in a very artistic and engaging way. But that was over soon and replaced with another era of heartbreak. The public wasn’t truly ready for what was about to come: a mix of sad-pop lyrics infused with country vibes and displayed in a cinematic music video.

How Old Was Miley Cyrus When She Got Married?

Miley was 25 years old when she married Australian Liam Hemsworth (who was 28 at the time), in 2018. Unfortunately, their marriage was a very short one. Their contract, so-to-speak, didn’t last long. In the summer of 2019, the couple announced their breakup. Here’s a quick look at their on and off relationship timeline.

2009 is the year when Liam and Miley first got together. They met on the set of The Last Song movie based on a book by Nicholas Sparks. Hold your horses because they weren’t a couple of a decade. We all know that her love story was full of passion and events.

According to RapTV, they split up for approximately a month in August 2010, only to reconcile in September. In early 2012, people believed that Miley and Liam got engaged, but she denies it. Soon after, in June 2012, they both confirmed the engagement and made it official.

Maybe you’re wondering how old Miley was when the couple first got engaged. Well, she was only 19, so we could say that they didn’t waste their time. Later on, in 2013, Miley is seen without her engagement ring, which brings up speculations about their wedding being called off.

Sometime between 2013 and 2014, Miley breaks up with Liam and starts dating Patrick Schwarzenegger. The relationship ended in 2015. In the meantime, Liam adopts a rescue dog. In 2016, they were spotted together in Australia, during a music festival.

Their relationship becomes official again as soon as she starts flashing her old engagement ring. In 2017, the Malibu song came out which Miley said was dedicated to Liam. So, we can assume that the heat was still strong. Rumors about their wedding start to appear.

The Wedding and… Divorce

In November 2018, their Malibu house was destroyed in the California wildfires, and this unfortunate event seems to bring them closer together. They got married in December, that same year. The wedding was very low-key.

By the end of the summer, 2019, Liam and Miley announced their separation. According to their entourage, they both wanted to focus more on their careers. In January 2020, the couple’s divorce was finalized.

There are many interesting things you should know about this former child star. Let’s take a look at Miley’s history and career:

Miley is 27 years old, but we’ve already established that. She is so young but has managed to achieve some pretty impressive things in her life and her musical career. Her performance and appearance have seen plenty of interesting transformations, including her most recent album, Younger Now, that was released in 2017. She was a judge on the 11th season of the Voice. I am sure there are still many things left for her to do, including a new album, that will definitely impress us.