Who Is Miley Cyrus’s Dad? 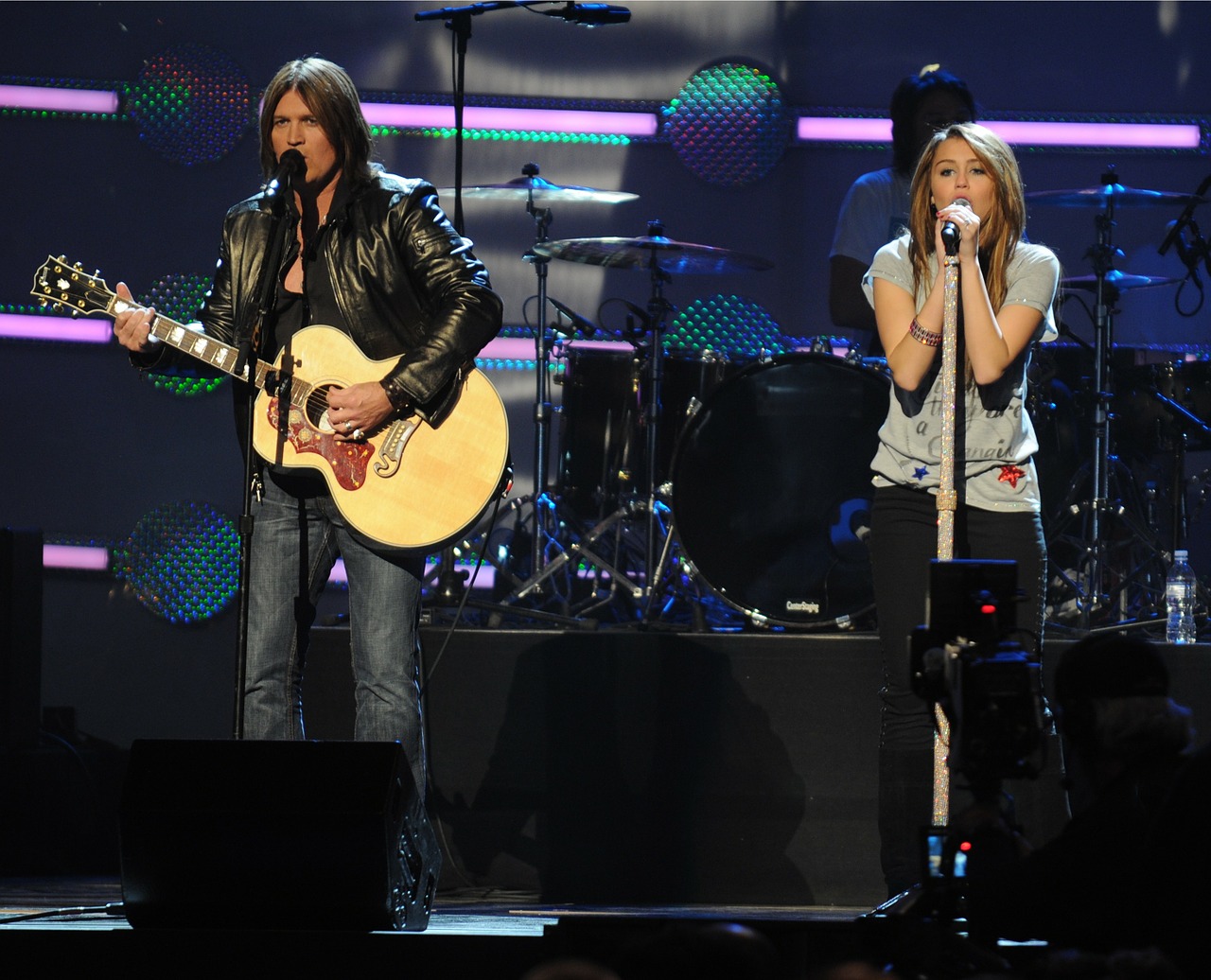 Home » Too Short » Who Is Miley Cyrus’s Dad?

While everyone under a certain age knows the Wrecking Ball star, Miley Cyrus, just about everyone over a certain age knows her Dad. Dad Billy Ray Cyrus is a 58-year-old Country Music star who had a string of hits in the early 1990s. It’s no wonder the ex of Liam Hemsworth, Miley Cyrus came from an entertainment family as she started her career in the industry at a very young age. Her first TV appearance, which happened when she was not yet even 10-years-old, came on her Billy Ray’s popular sitcom Doc. It was during this time on TV that Billy Ray noticed his daughter had a knack for acting. He and his wife Tish started paying attention to potential roles for Miley, and next thing you know, she was auditioning for the part of Hannah Montana. While the creators of Hannah Montana had someone a bit older and bigger in mind, Billy Ray’s clout in the industry was, at least, able to help get his daughter in the door. According to RapTV, from there, Miley dazzled the show’s director and producers, and the rest, well, is history.

But just who is Billy Ray Cyrus? And how did he come up in the Country music business?

Unsurprisingly, Billy Ray Cyrus had an early rural life. He grew up in Flatwoods, Kentucky, and was the son of Ron Cyrus, who was a steelworker and Democratic politician in the state. Billy Ray is often coy about his relationship with his father. The two, it seemed, got along well, but Billy Ray is a somewhat private man who prefers to keep at least some parts of his private life to himself.

One thing Billy Ray certainly learned from his father is the ability to pick yourself up by your bootstraps. Ron Cyrus was a famously hard worker who rose from the ranks of steelworkers to become an educated and respected Democratic politician. Ron spent much of his political career fighting for worker’s rights in the state, something which he understood well. Billy Ray would go on to emulate his father by trying to rise above his circumstances and create a career all his own.

At the age of 10, Billy Ray (like his eventual daughter) was inspired to start a career in music. The young Billy Ray was taken to see a local Neil Diamond concert and was inspired by the singer to go down the same road. From there, Billy Ray’s parents bought him his first guitar, and he began learning to play, sing, and write music. Billy Ray’s parents were encouraging, although, how could they have possibly known how successful their son would eventually go on to be? So many parents see their children go into one phase to another to another. And all they can do is offer encouragement, occasional guidance, and support. But Billy Ray was not like other kids; he had a one-track mind. And that mind was set solely on becoming a musician.

Billy Ray Cyrus stuck with his songwriting and guitar until in 1980, he moved to Nashville and formed a band called ‘Sly Dog.’ The band had promise and a few decent songs, so they were quickly signed to a small contract with Mercury Nashville Records.

Billy Ray’s first band struggled to survive and eventually had to call it quits. But Billy Ray wasn’t ready to stop pursuing his dream. The musician moved to LA and began seeking out another recording contract as he wrote more songs.

The important thing to remember is that during this time in the late 80s early 90s, there were few, if any methods for an unknown musician to release his music other than through the traditional record-company-system. There was no YouTube or Spotify where artists could simply release their records straight to consumers and hope for the best. Eventually, the first genre to really explore the direct-to-consumer business model would not be Country music, but Rap as many young rappers started creating and selling their own mixtapes, which eventually led to a culture where many great rappers and Hip Hop artists made it big without the help record companies. But, unfortunately for Billy Ray, these options were in the future and, therefore, not available to him.

In 1990, after a lot of hard work and living in his car, Billy Ray managed to land another record deal. This one with PolyGram/Mercury. This time, Billy Ray was ready, he had a catalog of songs ready to record.

Billy Ray Cyrus released the album “She’s Not Cryin’ Anymore” in 1990, and it shot to number 6 on the Billboard 100. The album featured a hit number 1 single titled Achy Breaky Heart. The song came complete with a music video featuring Billy Ray in some very tight blue jeans, which worked to make the singer a bona fide sex symbol in the Country music world.

Billy Ray went on tour on the back of Achy Breaky Heart as well as several other songs that performed well on the album and started cutting his first large paychecks.

Following the release of his first album, Billy Ray’s natural work ethic kicked into gear, and he started releasing roughly an album every year through the 90s.

Billy Ray was already a commercial success. He had legions of fans and a great touring schedule. But many Country music critics panned him as being too pop or of not being “real” Country music. That changed around 1996 when Billy Ray released the album “Trail of Tears.” While it did not sell as well as his first album, “Trail of Tears” solidified Billy Ray as a legit Country music singer with some real chops.

In the 2000s, Billy Ray made a career pivot as he began focusing mainly on Christian music, debuting two albums in 2003. From there, Billy Ray began exploring some of his other options in the entertainment industry.

Billy Ray began acting in a popular TV series titled Doc around this time and also appeared in several other movies and TV shows.

Billy Ray put his own ambitions on hold as he helped his daughter pursue her exploding career on the Disney Channel TV show Hannah Montana. He and wife Tish moved the family out to California and supported Miley during those chaotic early years as she went from an unknown child to a teen idol superstar, similar to the other Disney Channel TV stars like Demi Lovato. During this time, Billy Ray also had something of a resurgence, but mainly as the bright minded, “Miley’s Dad.” It was until 2019 that he had a resurgence on his own terms.

Old Town Road is a song by Hip Hop artist Lil Nas X featuring Billy Ray Cyrus. The song is quirky and initially had trouble finding it’s footing as a part-Rap, part-Country song. But, eventually, the song went on to become the biggest Rap-Country cross over of all time as it topped the Billboard 100 and brought Billy Ray back into mainstream focus.

There you have it, Miley Cyrus’s Dad is a Country singer music star named Billy Ray Cyrus who knows how to make an appearance on social media here and there. Billy Ray is known for a number of songs, including Achey Brakey Heart and, more recently, Old Town Road, which was one of the biggest crossover hits of all time.

Some would argue that coming to form a family in the entertainment business is difficult. And, certainly, in some cases, it is, because actors, musicians, and the like are somewhat notoriously narcissistic and that is not the best characteristic for a parent. However, having a famous parent like Billy Ray Cyrus is not a bad thing if you are a creative and ambitious young person like Miley and most of her siblings. Whether it’s their own gig in Hollywood, hosting The Voice, or appearing on a talk show, almost all of the Cyrus clan is involved in the entertainment industry in one way or the other, and all of them seem to enjoy it rather than feeling as if they were forced into doing something they don’t like. Billy Ray and Tish Cyrus deserve all the credit for raising mature, fully-formed adults capable of surviving with their heads screwed on straight during a time when people in the United States are obsessed with a celebrity like no other time in history. This may have something to do with the fact that Billy Ray had experience with meteoric success. While Achey Brakey Heart was far from the first song he ever wrote, the overnight popularity Billy Ray received after releasing the tune must have been overwhelming. He went from being relatively unknown to a Country music sex symbol, seemingly overnight. For many, this would have resulted in an inflated ego, and possibly also other, more serious problems. But not for Billy Ray, he took his newfound fame in stride and, in many ways, didn’t seem bothered by it. Billy Ray Cyrus is, ultimately, just a simple country boy, and, whether a famous musician or a farmhand, he seems to do well at taking life as it comes—a quality which hopefully rubs off on his daughter Miley as well as the rest of the family.