The 10 Most Outrageous Rapper Cribs 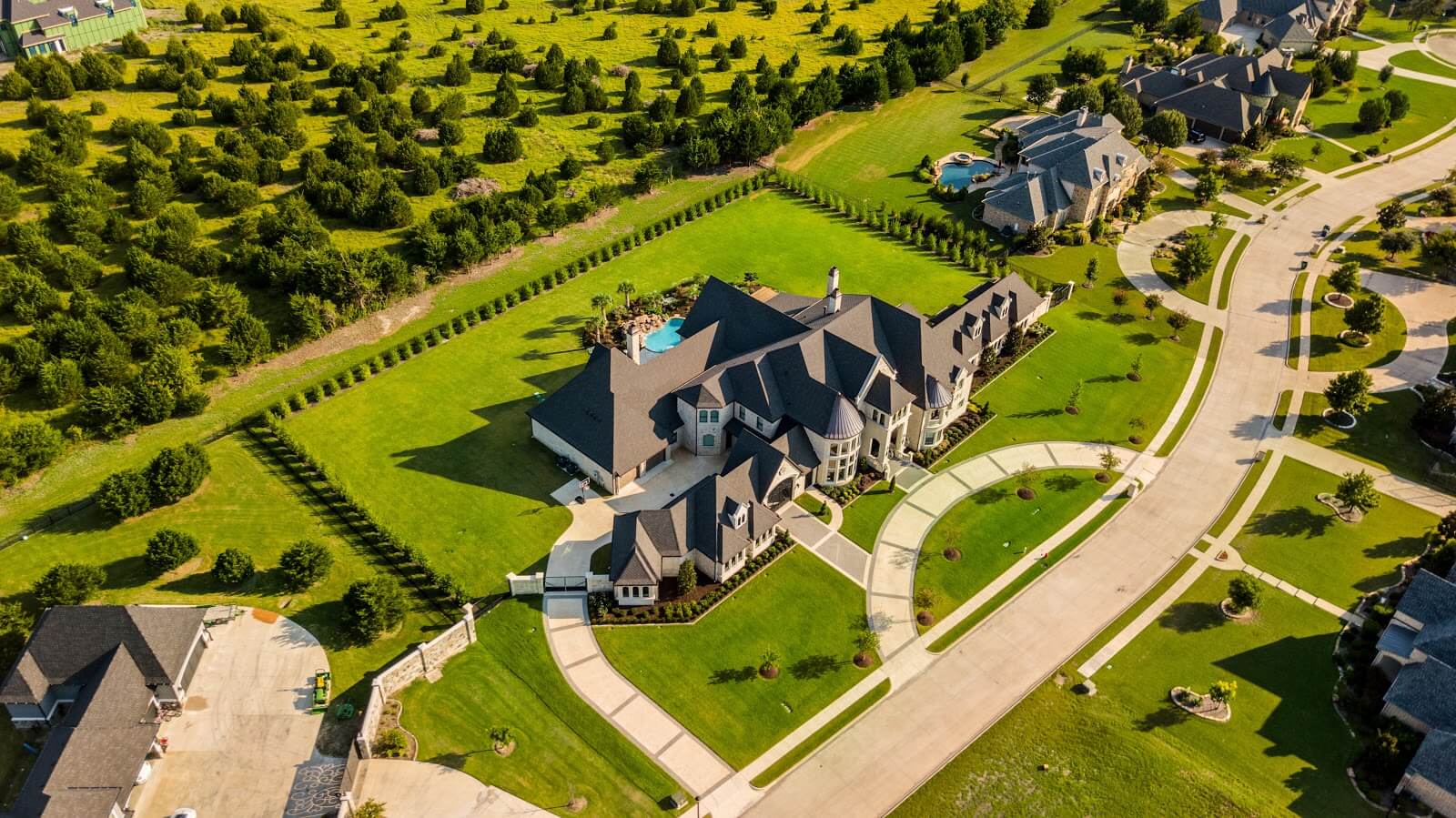 Home » Q and A » The 10 Most Outrageous Rapper Cribs

The rappers who make it big are consistently raking in tons of cash, allowing them to afford certain lifestyles and luxuries that the rest of the world can only dream of. One of the most exciting purchases in any person’s life is their home, and these rappers take this idea to the next level.

The following rappers blow us away both with their amazing music and absolutely jaw-dropping houses, so read on to get an in-depth look at the ten most outrageous rapper cribs out there right now.

Spending most of his youth growing up in Detroit, Eminem has a deep connection to Michigan, even choosing to purchase his former Rochester Hills mansion (which he sold in 2017 for $1.9 million) less than 40 miles away from the rough area of Detroit he grew up in.

The rapper’s 15,000 square foot home is indicative of how far he’s come. Initially purchased in 2003 before he parted ways with the property just a few years ago, Eminem’s Rochester Hills property consisted of six bedrooms, ten bathrooms, a swimming pool, tennis court, private pond, and nearly six acres of surrounding land. It’s definitely a place you could “Lose Yourself” inside of!

Sean Combs, best known by stage names P. Diddy, Puff Daddy, Puffy, or Diddy, has built up an impressive career over the past 30 years as a rapper, record producer, and entrepreneur. So, it should come as no great surprise that Diddy lives in a beautiful 17,000 square foot mansion that he bought for $40 million in 2014.

If you didn’t think it was large before, the additional 3,000 square footage of outbuilding structure ensures that Puff’s pad is big enough to comfortably fit him and all six of his children. The property also includes eight bedrooms, 11 bathrooms, a swimming pool (which has an underwater tunnel built-in!), a wine cellar, a home gym, a home theater, and one acre of land. Sounds like a pretty nice place to grow up or live your life.

Minaj’s Mediterranean estate is a super place worthy of the “Super Bass” rapper and has been rented by the rapper for about $30,000 a month. Spanning over 12,000 square feet on about an acre of land, the property consists of nine bedrooms, 11 bathrooms, a five-car garage, swimming pool, home spa, backyard BBQ area, and numerous large windows to let in light in addition to the gorgeous surrounding mountain views.

While it’s not confirmed if the “Starships” singer still lives at this residence she initially began renting with ex-boyfriend Meek Mill, whether she currently lives with her husband of nearly two years, Kenneth Petty, or she maintains her Beverly Hills property, there’s no denying that this is one unforgettable and gorgeous home.

Post Malone’s $3 million property is in a secluded area in Northern Utah, just outside of Salt Lake City, and is the perfect place to escape from the world’s craziness and business (or from an apocalypse). The home’s partially remote location offers privacy along with picturesque views of the surrounding mountain, canyons, and nature.

Post’s Utah pad is a 12,702 square foot mansion with five bedrooms, six bathrooms, a basketball court, wine cellar, home gym, hot tub, fire pit, personal recording studio, and extra bunks for his bros. If there’s anywhere you’d want to wait on an apocalyptic event, natural disaster, or pandemic, this is the place. This fresh, modern property is the perfect place for a young artist like Post, and is a testament to all that he has already accomplished at the age of 25, as well as a promise of what more greatness is on the way in the future.

They’re not even 30 years old, and yet Offset and Cardi B have found themselves and their daughter, Kulture, a jaw-dropping place to call home. The impressive rap power-couple bought a massive mansion that was listed for over $5.2 million in Atlanta in 2019,  which spans 22,000 square feet.

Adorned with columns, a long curved staircase, grand arches, chandeliers, and massive windows, the place is reminiscent of a resort or small castle. The mansion has amenities like a pool, wine cellar, indoor shooting range, massive game room, and cavernous garage, and the property itself is surrounded by 5.84 wooded acres. This seems like the perfect place for two talented rappers in their late 20s to build a home, family, and even bigger careers.

Lil Wayne has been a signed rapper since he was only 12 years old, and in 2018 the singer, songwriter, and entrepreneur’s near lifetime of hard work culminated in the purchase of an extremely impressive 10,472 square foot home in Miami for $16.75 million.

Wayne’s mansion has a modern aesthetic that draws the eye and wows right from the front walkway, which is surrounded by a gleaming pond one can cross on the raised platform steps there. Inside, the home has nine bedrooms, 11 baths, a home theater, a three-car garage, an elevator, a pool, and more, with an open design that blends the structure with the local fauna of secluded Allison Island, just off of Miami Beach. The man’s “Got Money,” and you can tell he put a lot of it into this amazing mansion.

Although he recently sold it, Snoop Dogg’s aptly named “Dogg House” is a crib for the ages. The “Drop It Like It’s Hot” rapper has had the Mediterranean-style Claremont home featured in an episode of MTV Cribs, giving us all an up-close look at why the California mansion was one worth envying.

Snoop first bought the Dogg House in 1994 for $660,000, maintaining and upgrading it until it reached the $2.5 million it’s worth now. The 6,500 square foot home has eight beds and five and a half bathrooms in addition to a home theater, home studio, swimming pool, grand staircases, and a full-sized L.A. Lakers-themed outdoor basketball court. It’s no wonder that Snoop spent so many years calling this place home after making it his own personal “Doggy Dogg World.”

DJ Kahled is a larger than life rapper, record producer, and media personality, so it only makes sense that the voice and mind behind “All I Do Is Win,” “I’m the One,” and “Higher” would live in a home just as large and dripping with wealth. Khaled’s $25.9 million Miami Beach mansion spans 12,750 square feet and is structured in an open, large-windowed contemporary style that shows off just how splendid this house is inside and out.

Surrounded by palm trees and lush greenery, Khaled’s waterfront mansion has nine bedrooms and ten and a half bathrooms (that includes his four-bedroom guest house, as well). The home and grounds include an 80-foot long outdoor swimming pool, two-level gazebo, safe room, elevator, and home theater, culminating in a grand home fit for the rapper’s wife, two children, and big personality.

Rapper, actor, and entrepreneur Drake stays true to his Canadian roots by taking up residence in Toronto. The massive 50,000 square foot mansion screams opulence and style from top to bottom, and is indicative of the rapper’s success, talent, and drive that helped him accumulate four Grammy Awards, worldwide fame, and the money to spend on a home like this one.

Drake enlisted the help of Canadian interior and architectural designer Ferris Rafauli to help erect a custom-made home built to last and reflect a life well-lived and well-earned. The home — dubbed “The Embassy” — includes an NBA-sized indoor basketball court, Swarovski crystal chandelier, grand staircases, an indoor swimming pool, a 10-car garage, and private recording studio, all tied together by a unique, art-deco style that reflects the personality and attention-to-detail of the homeowner. We’d say “Hold On, We’re Going Home,” too, if this was the kind of place we could return to!

Will Smith has had one of the most successful and well-known careers of any rapper-cum-actor, culminating in two Grammy Awards, hits like “Summertime,” two Academy Award nominations, classic and memorable roles in movies and shows like Men in Black and The Fresh Prince of Bel-Air, a talented and lovely family, and, of course, one sprawling and stunning estate.

Smith and his family reside in a 25,000 square foot mansion on 150 acres of land in Calabasas, California, that looks from aerial view like it could be its own luxury resort or gated community. Smith commissioned Stephan Samuelson to design this incredible custom home that began construction in 2003, and which has an asking price of $42 million in 2014 (so we can assume it has only gone up). The property is complete with nine bedrooms, a home theater, an outdoor pool, an outdoor basketball court, a tennis court, private lake with its own island and gazebo, and, of course, lots and lots of land.

Cardi B and Offset Give Each Other an Atlanta Mansion for Christmas | realtor.com

An Inside Look At Snoop Dogg’s Mansion | The Things