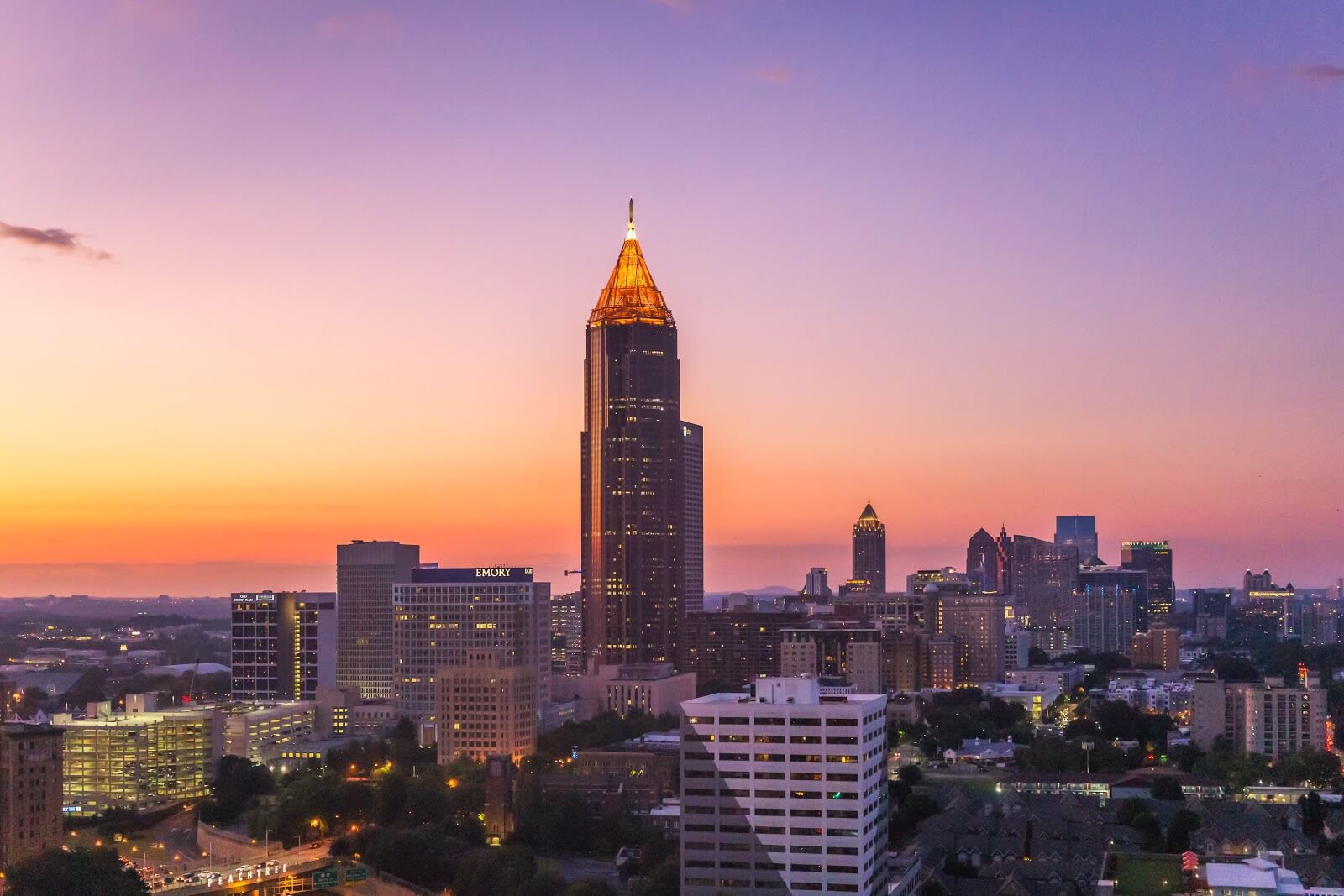 Rappers across the country tend to find great inspiration in the cities and areas they grew up in, drawing from the everyday lives, struggles, and situations of the places that shaped them. In recent decades, Atlanta, Georgia, has proven itself a hub for many talented rappers, giving many young industry hopefuls a place to grow, find record labels, and experiment with new rap, trap, and hip-hop sounds.

Read on to learn more about 10 of the biggest current names in rap who come from and got their start in Atlanta.

Born Quavious Marshall, Quavo is a rapper out of Lawrenceville, Georgia, and who is probably best known as one-third of hip-hop and trap group Migos, with its members all growing up together just outside of Atlanta. Quavo began gaining notoriety with the release of Migos’s 2013 mixtape Young Rich N*ggas, with its single “Versace” peaking at #99 on the Billboard 100 and gaining massive popularity after rapper Drake remixed the song.

The success of Migos’s second studio album, Culture, which peaked at #1 on the Billboard 200, opened doors for Quavo to perform as a featured artist on hit songs like 2016 Post Malone single “Congratulations,” 2017 DJ Khaled single “I’m the One,” and 2017 Drake single “Portland.”

Breaking into work as a solo artist, Quavo’s 2018 debut solo album Quavo Huncho peaked at #2 on the Billboard 200, exemplifying the rapper’s ability to succeed both with Migos and on his own. This versatility has helped solidify as one of the top artists to recently be forged by the Atlanta music scene.

Born Bobby Ray Simmons Jr., B.o.B. grew up in Decatur, a city part of the Atlanta metropolitan area. Discovered in 2006 at the mere age of 17, B.o.B. fell in love with music early on. At first, he used music-making as a hobby, playing the trumpet and various other instruments throughout grade school before he took things to the next level in high school, securing management and selling his first beat at 15 years-old. The young rapper honed his skills in the local underground community, growing into his own versatile, genre-blending style.

Songs like “Nothin’ on You,” “Airplanes,” and “Magic” were instant hits that made the young artist a mainstream success. While his success and fame have slightly waned in recent years after his wildly successful early to mid-2010s, B.o.B has earned impressive accolades like six Grammy Award nominations throughout his career. He has undoubtedly put in a good word for the unique personal expression that can come out of the Atlanta rap scene.

2 Chainz grew up Tauheed Epps near south Atlanta in College Park, Georgia. In 1997, 2 Chainz formed hip-hop duo Playaz Circle with his high school friend Earl “Dolla Boy” Conyers and started performing under the stage name Tity Boi. The two put out an independent album, United We Stand, United We Fall in 2002, and eventually managed to get introduced to fellow Atlanta-based rapper Ludacris, who had moved into the duo’s same apartment complex in College Park. Continuing to grow with the help of Ludacris in the Atlanta rap scene, Playaz Circle released their first studio album Supply & Demand in 2007, and enjoyed some success before Tity Boi decided to break off and rebrand himself as 2 Chainz in 2011.

2 Chainz began accruing impressive features on songs by artists like Kayne West and Nicki Minaj before releasing his own debut solo album in 2012, entitled Based on a T.R.U. Story, which debuted at #1 on the Billboard 200. The rapper quickly gained steam as both a solo and collaborative artist, going on to earn six Grammy Award nominations, one of which he won for his featured work alongside Lil Wayne in Chance the Rapper’s 2016 single “No Problem.”

Thomas Callway, AKA CeeLo Green, was born in Atlanta in 1975, and took part in local gang activity and committed petty theft until he eventually dropped out of school early in high school. Throughout his childhood, Green showed an interest in and talent for music, playing the piano at home and honing his vocal skills at church, and his growing talents and passion convinced him to pursue music professionally by the time he reached his late teens. Green soon formed hip-hop group Goodie Mob with some other movers and shakers in the Atlanta rap and hip-hop scene, releasing their debut album Soul Food as a group in 1995.

Towards the beginning of the new millennium, Green broke off from Goodie Mob to embark on a solo career now that his work with the group had gained him some notoriety. Green’s songwriting and musical style that mixes R&B, rap, soul, and pop has helped him to stay relevant and adaptable throughout his career and to put out megahits like “Fuck You” and “Crazy.” The man is a five-time Grammy Award winner for good reason, and is one of the most successful names associated with Atlanta rap and hip-hop.

Born Shéyaa Bin Abraham-Joseph in London, 21 Savage moved to Atlanta with his mother when he was seven years old. He had a slightly rocky upbringing in the city that had him hopping from school to school (and even spending some time at a youth detention center) before eventually dropping out of high school and joining a gang that had him making money as a drug dealer and getting involved in local crime. It wasn’t until he was 21 years old and caught up in an armed robbery that left him with multiple gunshot wounds and killed his best friend, that 21 Savage decided to turn his life around and pursue a career in rap instead.

The troubles of his Atlanta youth helped fuel 21 Savage’s debut single “Picky” in 2014, quickly making a name for himself in the underground Atlanta rap scene before grinding his way to releasing his first studio album, Issa Album, in 2017, which debuted at the #2 spot on the Billboard 200. His heavily autobiographical musical style and gangsta rap-like flow helped make his 2018 second studio album, I Am > I Was, a big hit and worthy of a Grammy Award in Best Rap Song for “A Lot.”

Before becoming the rapper we know as Future, Nayvadius Wilburn grew up in Atlanta, where he began performing with Atlanta Southern hip-hop collective, The Dungeon Family, who first stuck him with the nickname “The Future.” Mentored by members of the local music scene like his cousin and fellow Dungeon Family member Rico Wade, Future grew into himself as a performer in Atlanta before being encouraged to pursue music professionally. This led the rapper to release mixtapes throughout 2010 and 2011 that helped him grow into a style that’s allowed him to combine singing and rapping with autotune and other technology in innovative and inventive ways.

Future has received five Grammy Award nominations (one of which he won in 2019 for Best Rap Performance) and released hugely popular singles like “Where Ya At,” “Jumpman,” “Mask Off,” and “Life is Good,” that have shown why his stage name was well-chosen and has so far also been well-earned.

Christopher Bridges moved to Atlanta in high school and stayed in the area to attend Georgia State University, during which he started DJing locally, making connections and gaining experience in the local Atlanta scene before eventually deciding on the stage name Ludacris and releasing his own first album, Incognegro, independently in 2000. One single off the album called “What’s Your Fantasy” became a breakout hit, even peaking at #21 on the Billboard Hot 100 and becoming popular enough to land Ludacris a record deal with Def Jam South.

Atlanta offered an excellent playground for Ludacris early in his career, helping him grow enough to break out into mainstream success over the course of nine studio albums, three Grammy Awards, and an additional career in acting that’s seen him land a Screen Actors Guild Award, alongside international name recognition.

Born Michael Render in Atlanta in 1975, Killa Mike grew up immersed in the Atlanta music scene, getting to meet other local up-and-comers Big Boi and André 3000 of hip-hop duo Outkast while all were still in young adulthood. In the early 2000s, Mike was featured in songs by growing artists like Outkast and Jay-Z before finally releasing his debut album Monster in 2003 to positive reviews.

The rapper and songwriter quickly gained steam, releasing five solo studio albums, winning a Grammy Award, and working with numerous reputable artists, all within a decade before forming hip-hop supergroup Run the Jewels with rapper/producer El-P in 2012. Killa Mike continues to release award-winning music with RTJ and branding off into acting and activism, as well.

Childish Gambino is the stage name of Donald Glover, who was born in 1983 and grew up in the Atlanta suburb, Stone Mountain. He grew up with a love for performing and writing that got him into comedy and music while attending high school. This love also inspired him to attend college at NYU, where he was enrolled in the prestigious Tisch School of the Arts’s degree in Dramatic Writing all-the-while self-producing his unreleased mixtape The Younger I Get.

Gambino proved himself to be quite the renaissance man, finding success in writing for shows like 30 Rock and acting in sitcom Community, breaking out as a solo rapper and hip-hop artist under the stage name Childish Gambino, and working in blockbuster feature films like Solo. Hugely popular singles like “Redbone” and “This Is America” have also helped Gambino accrue five Grammy Awards in the last three years.

But even after all of his success, the rapper never forgot his Atlanta roots, even creating a comedy-drama television series named after the city itself that has earned him two Emmy and two Golden Globe Awards, and the respect of a city he used to call home.

Born André Benjamin in 1975, this Atlanta-born and raised rapper has collected six Grammy Awards and collaborated with a vast array of artists spanning countless genres across the expanse of his noteworthy career as a rapper, songwriter, and producer. He’s #6 on Billboard’s list of the Top 10 Rappers of All Time for good reason, after all.

André was raised in a rough area by single mother and real estate seller Sharon, who endeavored to protect her son and save him from the streets by helping him pursue a good education and the arts that he showed an early aptitude for. Atlanta helped shape André and led him to meet his future friend and collaborator, Antwan “Big Boi” Patton, in high school, thus creating Outkast and the beginnings of his almost 30-year professional musical career.

André’s upbringing in Atlanta helped hone his creative mind and adaptability as a performer, leading him to have great success both with Outkast and in his career solo and as a featured artist, winning seven Grammy Awards and continuing to create innovative new work that will surely earn him several more.