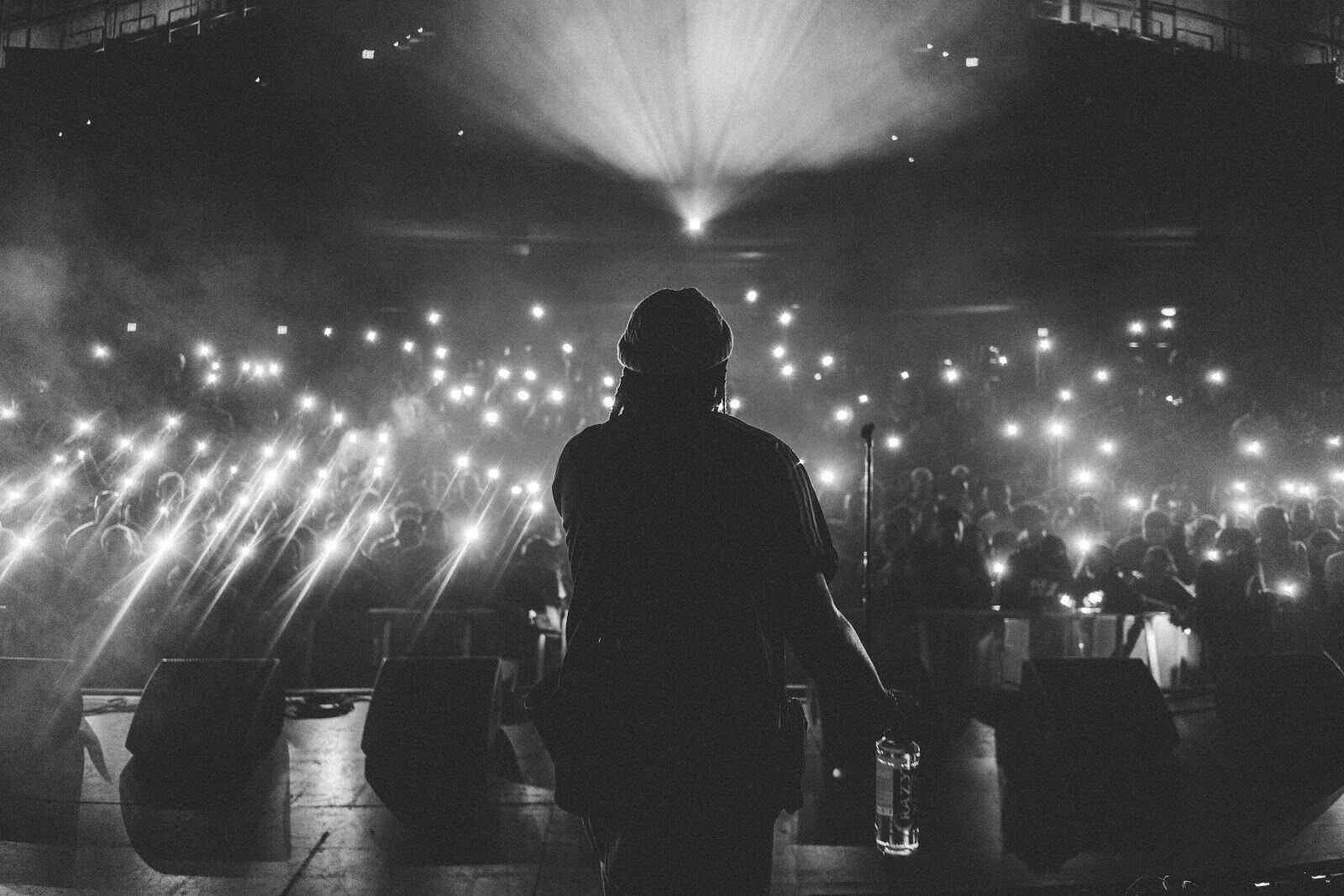 Rap and hip-hop are genres that speak truth to power. Their intricate lyricism and vast story-telling capabilities make them almost as much music as they are a movement. Because of this, rap and hip-hop are heavily influenced by the people, events, and circumstances surrounding them and their artists, meaning that they have changed a lot throughout the past several decades.

Read on to learn more about 13 moments that changed rap and hip-hop and helped make the genres into what they are today.

Blondie’s 1981 single “Rapture” was a game-changer in the story of rap and hip-hop music. The song peaked at #1 on the Billboard Hot 100 and stayed there for two weeks, effectively rocketing rap and hip-hop into mainstream music.

The song’s accompanying music video was the first-ever hip-hop video featured on MTV.  This helped to spread both sound and visuals that would inspire a general interest and fascination with the genre, and opened the door to more rap and hip-hop being seen on television, played on the radio, and enjoyed by mainstream audiences.

In the ‘80s, rap and hip-hop continued to grow into themselves and find their footing. This was only made easier by the founding of Def Jam Recordings by Rick Rubin and Russell Simmons in 1984. Based in Manhattan, Def Jam was the first label to market itself as geared towards hip-hop and urban music.

In 1986, hip-hop group Run-DMC joined forces with rock band Aerosmith for a remake of 1975 Aerosmith single “Walk This Way,” opening hip-hop up to a wider audience and showing that it could mix and flow well with popular other genres.

The song peaked at #4 on the Billboard Hot 100 and marked both a comeback for Aerosmith, who had been in a bit of a creative rut in the early ‘80s, and a big break for Run-DMC and like-minded early hip-hop groups. With “Walk This Way,” the power and growth of hip-hop and rap were undeniable, and it became clear that the genres were there to stay.

4. “Fight the Power,” and Spike Lee’s Do the Right Thing

Filmmaker Spike Lee has never been one to shy away from race relations and the lifestyles and treatment (or mistreatment) of black Americans living in urban communities. So, it only makes sense that Lee would want to associate himself with music that properly reflected his unflinching, honest storytelling.

The director’s third feature film, 1989 Academy Award-nominated comedy-drama Do the Right Thing, clues audiences into the fraught racial relations and explosions of violence happening in Brooklyn. It uses the Public Enemy hip-hop song “Fight the Power” as an anthem to evoke the social critiques and visceral emotions that are present throughout the film. The song became a hit, peaking at #68 on the Billboard Hot 100, and showed that rap and hip-hop had the power to carry declarative, political statements and calls to action.

5. The Fresh Prince of Bel-Air Premieres on NBC

In September 1990, NBC premiered its newest sitcom, The Fresh Prince of Bel-Air, starring recent Grammy Award-winner and young rap and hip-hop up-and-comer Will Smith. The show, which ran from 1990 to 1996, introduced audiences across the country to West Philadelphia life, cultural and racial divides, and rap and hip-hop music, and all on Network television.

The show was an instant hit, propelling Smith’s career as both an actor and singer to new heights. This paved the way for other rappers-turned-actors in the future and challenged preconceived notions and stereotypes about race, class, African American culture, and rap and hip-hop in a new and widespread way.

The album’s success gave a lot of clout to Death Row Records, which was already riding the high of Dr. Dre’s 1992 album “The Chronic.” This made way for the label’s rise to prominence, and it later instigated what would become a both creatively prosperous and socially/politically explosive battle between West Coast gangsta rap and East Coast hardcore hip-hop in the ‘90s.

Eventually, the East/West coast rap battle boiled over into violence, making gangsta rap, which had enjoyed growing success and notoriety in the late ‘80s and throughout the ‘90s, decline in relevance and popularity.

Neither murder was ever solved, thus shaking the rap industry, namely gangsta rap, to its core. This put an end to the combustible East/West rivalry, sending both rapper’s record labels on the decline and establishing rap and hip-hop’s potential to evoke and come to extreme violence and scandal.

Lauryn Hill consistently combined the best of rap, hip-hop, and soul to create completely unique music and sound that has memorialized her as one of the greatest voices and minds in rap of all-time.

In 1999, Hill, who was only 24 at the time, was nominated for a staggering 10 Grammy Awards for her debut solo album The Miseducation of Lauryn Hill, her first effort after breaking away from hip-hop group The Fugees. Hill won five Grammys that night, showing the country the potential success that could come out of a female solo rapper, and reintroducing a large audience to genres like reggae, R&B, and hip-hop as genres that could thrive in mainstream media and attention if only given a chance.

In 2006, Three 6 Mafia became the first-ever rap group to perform live at the Academy Awards. They were nominated for “It’s Hard Out Here for a Pimp,” the song they co-wrote with Cedric Coleman and recorded as the theme for 2005 drama film Hustle & Flow.

The group won the Academy Award for Best Original Song for their work, helping lift Three 6 Mafia to new heights and fame as a group, while also ushering in a new era for the Oscars and other prestigious award ceremonies to recognize rap and hip-hop as art forms worthy of respect, nomination, and celebration.

Then-newcomer Nicki Minaj released her debut album “Pink Friday” in 2010, immediately garnering attention and praise as well as putting her on the map as a rapper and personality. The album peaked at #1 on the Billboard 200 and went triple platinum, which was quite the way to start her career.

Minaj’s addictive hits played again and again on the radio, showing off her ridiculously fast flow and natural ability to create music that sells big for a mainstream crowd. The singer also paved the way for the future of female rappers, opening doors and opportunities to make music and call the shots in a way that wasn’t done as often or easily before.

11. Kanye and Taylor Swift at the VMAs

This has got to be one of the most unforgettable and slightly cringe-worthy music moments of the late aughts. No matter how much some may wish to, few can forget the 2009 MTV Video Music Awards, where a teenage Taylor Swift beat out Beyoncé for the Best Female Video award, prompting rapper Kanye West to take to the stage in the middle of Swift’s acceptance speech, saying “I’mma let you finish, but Beyoncé has one of the best videos of all time.”

As you may be able to imagine, this didn’t go over too well for West, and the backlash for his interruption forced him to go into seclusion, a period of time that gave birth to one of the greatest albums of his career, My Beautiful Dark Twisted Fantasy, which won the Grammy Award for Best Rap Album in 2012.

Hamilton’s 2015 release on Broadway was an absolute bombshell and instant megahit, completely redefining the relationship between history, race relations, the typically white and old history of theatergoers, and rap.  Lin-Manuel Miranda’s original musical based on the life of US founding father Alexander Hamilton starred a cast mostly composed of people of color and featured songs that were almost all flowing, lyrically-rich hip-hop and rap.

Hamilton was nominated for a record-breaking 16 Tony Awards in 2016, taking home 11. The same year, the musical won the Pulitzer Prize for Drama and Grammy Award for Best Musical Theater Album, shaking the worlds of theater and rap as we knew them and melding them in an innovative and profitable way.

After rap and hip-hop took over Broadway, it would almost seem as if there was no hill left to climb. However, the genres found a new way to make history when the release of 2018 Marvel film Black Panther, which broke boundaries in the superhero genre with its nearly all-black cast and depictions of black strength and beauty and received seven Academy Award nominations.

Black Panther’s soundtrack consists of original songs performed by rapper Kendrick Lamar and is full of hip-hop, trap, and pop-rap beats that received rave reviews, peaked at #1 on the Billboard 200, and won a Grammy and Academy Award for Best Original Score. The album showed just how well hip-hop and rap could fit in with wildly successful films and media and was a paragon of black excellence with a positive impact.

Blondie’s ‘Rapture,’ the first rap song to top the charts | Far Out Magazine