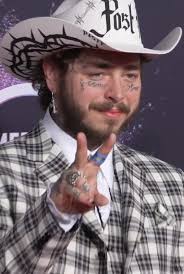 Post Malone is one of the biggest names in hip hop at the moment. But in a musical field that’s well known for its inclusivity and multiculturalism, lots of people wonder what nationality Post Malone belongs to. Is he American, or is his nationality more of a melting pot like the music that he’s so well known for?

Post was born in Syracuse, New York, and his mother, father, and stepmother are all white Americans. Post, too, looks the part of a pretty typical white guy, measuring in at about 6’ tall with dark hair. This seems to put a cap on the question, right?

Well, not quite. Post also has a bit of Native American in his genetic line, though the singer/songwriter hasn’t revealed many details on this front. In any event, it’s unlikely that he’s enough of a Native American to belong to any tribe in an official capacity or to mark it as such on any official documentation. Indeed, Post hasn’t mentioned any Native American tribe as a “nationality” so far, unlike some recent politicians!

So what nationality is Post Malone? We seem to be back to “American” as his apparently sole nationality. Is there anything else?

It turns out that his maternal grandfather is of Italian ancestry, which does mean that Post might have something of a claim for Italian citizenship or nationality if he ever decided to press the issue. This isn’t to say that Post is “actually” Italian, of course. According to stories about his childhood and upbringing, Post grew up in pretty standard American households that might’ve included staple Italian foods like pasta and spaghetti but otherwise didn’t observe any distinctly Italian standards or traditions.

So, yes. Post Malone does seem to be predominantly American in terms of nationality. Being American-born, he’s automatically an American citizen, and this is definitely what he puts on his passport whenever he decides to take an international vacation or go on tour.

The Nationalities of His Music

Being a hip-hop star, Post Malone creates a multicultural type of music that draws inspiration from a wide variety of sources. For example, hip-hop as a musical genre was originally derived from a blending of different musical styles all sourced from African-American, Jamaican, and Puerto Rican communities. The artform began deep in the heart of New York City when immigrants of all types decided to mingle and share the cultural heritage that brought them to the country.

The result? Rap and hip hop music that’s brought people together for several decades since.

As such, Post, along with any other hip-hop artist, adds to the rich tapestry of cultural influences and styles to create the musical format that we all know and love. This is a good thing – after all, part of hip-hop’s appeal is that almost anyone can take part in it and anyone can be great, regardless of their skin color or their national heritage.

Hip-hop isn’t only popular in America, either. It’s a worldwide phenomenon that has produced several different sub-genres, like Jewish hip hop. Post Malone might be American by nationality, but his artform is arguably the most international there can ever be.

In addition to the international influences that hip-hop always incorporates thanks to its origins, Post has added his own influences to the mix to create an iconic blend of music that is distinct from almost everything else. In a way, this is pretty American, too – the country itself is a mix of people from different places. It’s a country of immigrants!

The music Post crafts blends traditional hip-hop, rap, country, grunge, and R&B influences. As a result, each of his songs overcomes the basic nationalistic “White American” origins that you might try to box Post into.

All this being said, there have been a number of controversies surrounding Post’s so-called cultural appropriation, specifically of African American culture. Although hip-hop is an international art form and musical style, it’s also predominately created and enjoyed by African Americans and other minority cultures in the US.

A white man, especially one with an American heritage, entering the scene carries its own complications and connotations. There have been several critics of Post’s behavior or music, call him out as a “culture vulture”, describing many of the things that he makes as copies of other sounds or styles already present in the hip-hop sphere.

Post has denied these claims, of course, but it does go to show that the conversation regarding someone’s nationality and how it affects one’s place within hip hop is far from over.

Post himself hasn’t exactly helped things, as he’s gone on several intoxicated rants about those who decry his multicultural influences. He’s even gone so far as to suggest that there are unique struggles that white rappers experience that black hip-hop artists do not. This, of course, didn’t win him any points on the Internet and only added fuel to the fire.

This being said, we wouldn’t say that Post is a racist or a white nationalist by any means. However, many have said that Post could do to look at the wider implications of his behavior and take a bit of a step back. They might even be correct.

At the end of the day, the nationality that Post Malone belongs to is only part of the picture. It’s true that he’s American, but so are most other hip-hop stars. What really matters is the culture that influences an artist’s creations. You can be American and be multicultural or you can be from another country and be a bit more narrow-minded.

There is a balance to be struck, certainly. As RapTV put it, Post is one of rap’s hottest names at the moment. This means that everything he does we watched closely, but it also means that he has the opportunity to present Americans in a positive light if he chooses.

Time will tell whether Post’s nationality plays a bigger role in his music or his popularity.